December had arrived, and with it was my time to finally go home. Yesterday the new rules for arrivals into the UK had come into effect, so once I got home, I’d be stuck there for the next few days. I suspected I wouldn’t be set free until at least Sunday or Monday depending on whether or not the labs worked weekends and how quickly they could process my PCR. This would mean no long run at the weekend, and likely barely any run at all, so today was my best chance to do it.

I’d set the usual alarms for work on my phone last night, so today I’d be awake at 05:45, with the hope of being out by 06:00. I’d want to be back no later than 08:30 for breakfast and a shower, even though I didn’t need to pack much. It’d give me a chance to cool down before putting on warm clothes for travelling back home. As it happened I was awake and ready before my alarm went off.

It was still dark out when I set off running, and Molos Park was almost deserted. At the end, just off Deniz yolu beach I could see two silhouettes standing up in the water, swimmers already out to get in their strokes before sunrise. Somewhere around Olympion beach the path I was following no longer followed the beach, but moved to be alongside the road so that buildings were either side of me. I was sure there was an ever so slight incline for this entire stretch as well - and this continued all the way to Amathus where it went up-hill sharply, and when the pavement runs out there’s a bit of a switch-back through a carpark that can take you down onto the boardwalks I used a few days previous. I knew the turnaround point for the Limassol half marathon would be somewhere close to this point, so at least now I’d be familiar with the elevation - I’d just need to remember what it was like in a few months' time.

The sun was up now, and the boardwalks were being bashed by the sea as wave after wave crashed up against the rocks below and splashed the path. Somehow, without changing pace, I managed to miss each of the large waves and got to a calmer bit without too much trouble. 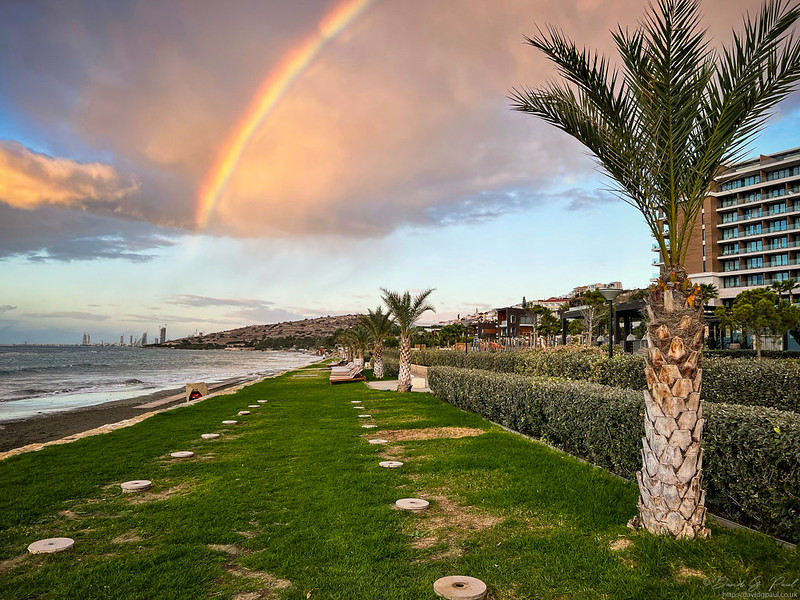 Just before the Saint Raphael Marina I reached the eight mile mark and turned around - which was just as well as the path ahead of me was almost constant underwater and was filthy. Whilst back home there’s a good chance I wouldn’t care and continue on, I was going to be packing these clothes in a couple of hours time, and didn’t really want them in that state if I could help it. When I turned around I realised how dark the clouds behind me were, yet around them was a blue sky. Not even an hour after sunrise and the sun was already getting rid of the regular morning cloud. Over the clouds was a rainbow, so I stopped to take a picture and carried on running back to the Old Port.

By the time I reached Molos Park the temperature was already feeling quite high - it was going to be another scorcher of a day. The sort of temperatures where you know you’ll be sitting in an airport for a couple of hours in warmer clothes, whilst waiting to fly to a country that is at least twenty degrees Celsius cooler. It’s one of those bits about travel that we endure for the part of it that is fun, though it is almost nice to walk off a plane and be shocked by searingly high temperatures at the start of a trip.

For the next couple of hours I got ready for the flight home, and had a taxi booked through Welcome Pickups to get me to Paphos airport. When booking it I wasn’t sure how long it’d take to get there, so I booked it for 1hr 40 before the check-in desk opened. I find it’s always good to be cautious when it comes to flights - they’re the one bit of transport you really don’t want to miss. It got me to the airport a lot quicker than I’d expected, arriving just forty minutes later. That’s one thing I’ve noticed about Cyprus - it seems that the speed limits are suggestions, not rules, and if you’re moving quicker than someone else then get up close to them until they move out of your way.

After thirty minutes of waiting, the check-in desks opened thirty minutes early. First I showed them my passport, and then unlike Germany I was asked for my Passenger Locator Form. My assumption in Germany was that they could see this somehow from having scanned my passport - here I had to hand over my phone, and she scrolled through it. Next she asked for my Day 2 PCR test booking, even though the details were on the PLF. So again I handed over my phone with the email containing the booking details, and she scrolled around some more. Despite it saying PCR, she asked me if it was a PCR test, to which I said it was. Just seconds later she asked again, making sure it was a PCR and not an LFT. The pandemic has certainly changed things, and I think airlines are being more cautious now. I do wonder if this is how it will always be now, but the process is easy enough.

Security was completely empty when I got there though I found it is one of the few airports where I had to remove my camera from my bag. At least it wasn’t like Chicago where I’d had to remove my lenses as well. Unfortunately here, it took a little more effort than normal as I’d not been using my camera backpack as I normally would, and had my camera buried underneath my lunch and other bits. Border control is then the machines that scan your passport and take your photograph with a printed receipt to give to the border officer with your passport. This does seem to speed things up as they take the receipt, compare the photos, and then stamp your passport. It makes the queue a fast moving one.

My intention was to have lunch as late as possible, to be as close to UK time as I could be, especially since it’d be maybe seven or more hours until I’d eat again. After my long run I was hungry though, and found myself eating this at midday as normal. There was still an hour until the flight would be boarding, and I realised that when that happens the queue will be outside under a shelter. When arriving at the airport I’d noticed strong winds had hit the coast, so I had a feeling this could be a bumpy ride to start with. Eventually though, this too was over and I was back in the UK and on my way to fetch my car from the terminal car park.

For now, the first chapter in my visit to Cyprus was over.