Wanting to fit as much into today as I could meant getting the 07:20 bus rather than the next at 09:45. This had the knock-on effect of needing to be up at 05:30 to run just two miles. This was followed by finding out there was no warm water for the shower, so I was certainly awake at least. I did wonder if maybe they don’t turn the hot water on until after sunrise - as that’d when I’d had hot showers previously. 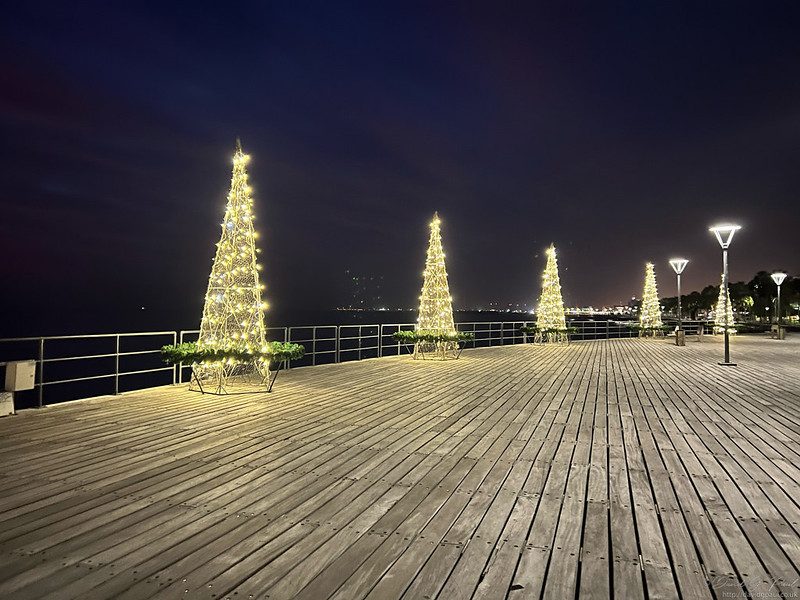 After my usual holiday breakfast of a croissant, I set off for the bus stop, again knowing which way to walk from memory. It was the same place I’d intended to catch a bus from for Amathus previously. Rather than spending €4 twice, I got a day ticket for €7 which would cover my return as well. The driver made sure I knew it was for this route only - that was fine, as I wouldn’t have time for anywhere else anyway. At 08:45 the bus had reached the Larnaca Marina - 77 minutes from when I got on it. It was very cloudy in Larnaca, and felt a few degrees cooler than I’d experienced in previous days, but it was still pleasant. 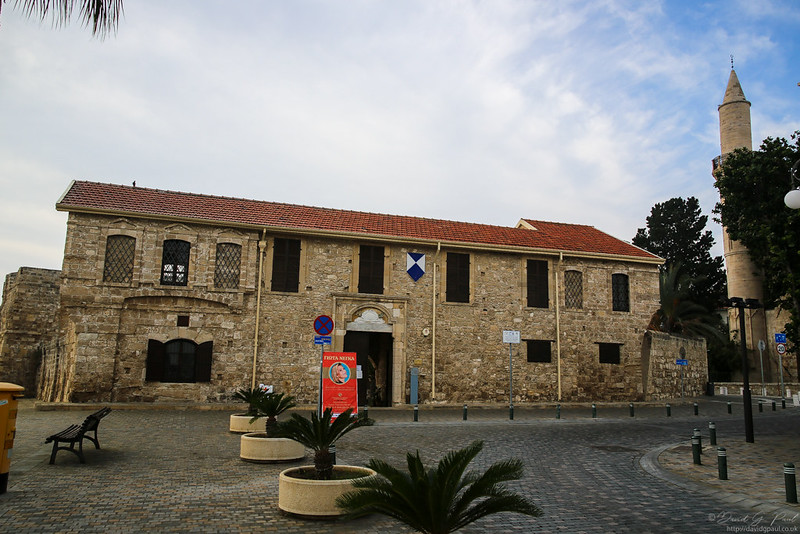 The Larnaca Castle is about five minutes from the marina bus stop, and there was nobody else there. It cost €2.50 to go in, and took around twenty minutes to look around, and I was taking my time compared to normal. At ground level there’s a couple of rooms with what appear to have been tombs in the wall, and the entrance to what the information boards suggest was the gallows. There’s also some stairs on one side to go up onto the wall, but this is only a small section. On the opposite side there are more stairs to go into a small museum containing mostly earthenware. 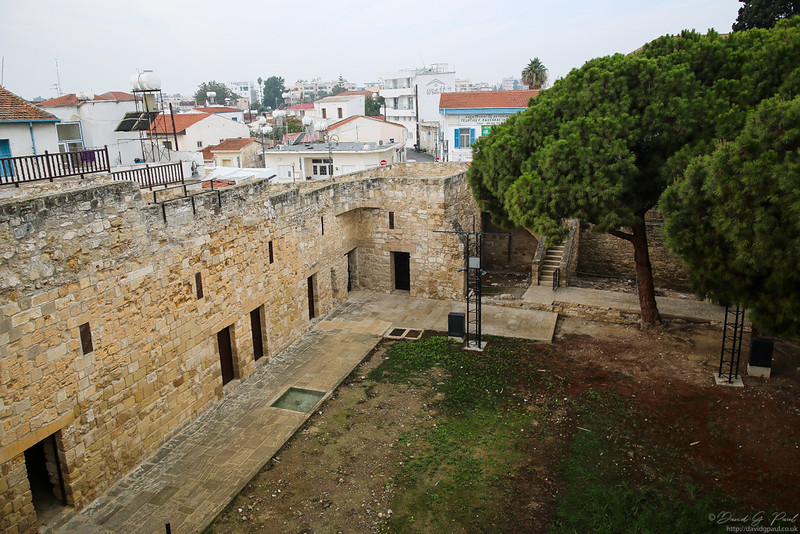 I found it was only a short walk to the Church of Saint Lazarus, so I went inside there and was surprised how different it was to others I’ve been inside to photograph before. Instead of pews there are singular chairs, and although it’s quite dark inside there are a lot of lights suspended from the ceiling. The differences being because this is a Greek Orthodox church. 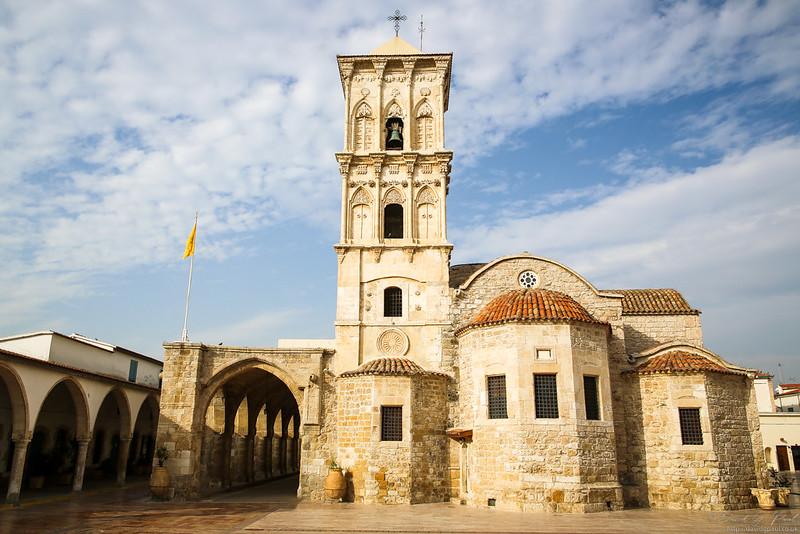 Where the altar is, you can also descend to the tomb of Lazarus for which this church is named. If you’ve watched the live-action movie of Casper, then you may already know about Lazarus, and it’s a name you could be familiar with from a lot of other media as well. This was the character in the New Testament who when died, was said to have been brought back to life. He was later forced to flee to Cyprus, and when he died for the second and final time, where this church stands is where he was supposed to have been buried. 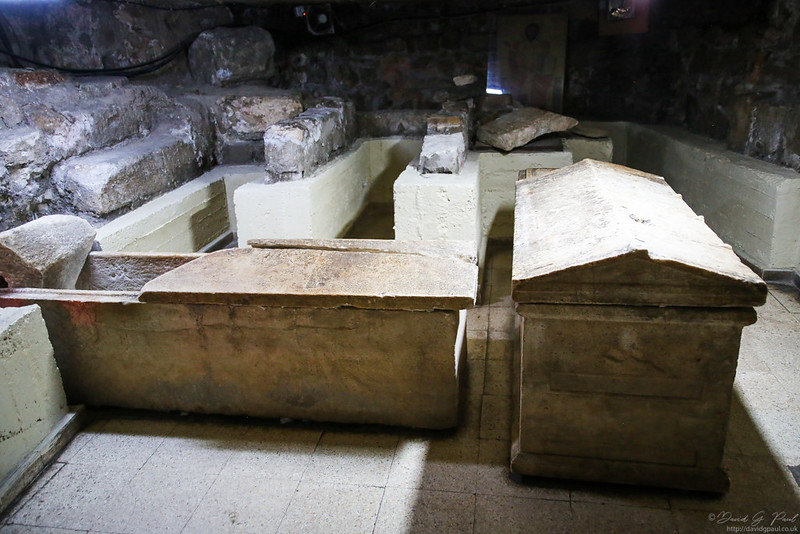 About a thirty minute walk north from the church, is Ancient Kition. I passed the archaeological museum on the way there, but found it to be closed. There was no indication of why, there was no sign up, just the gates were closed, there didn’t appear to be any lights on, and nobody was home. 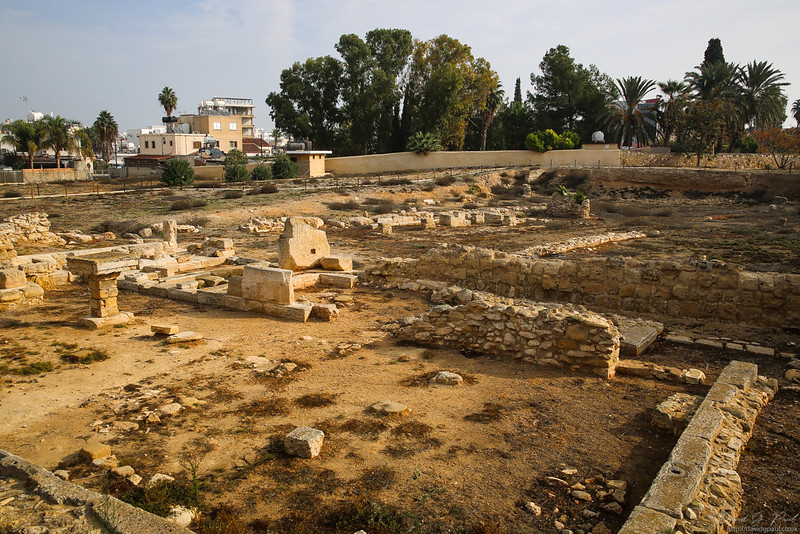 Kition was €2.50 to enter, and whilst I’d had an early start to give myself more time there, I didn’t really need it at all. The site is very small compared to many of the ones I’ve been to on the island already. It took around ten minutes to cross the centre of it on a boardwalk that goes over, and then also did a complete lap of the ruins around the outside. These are ones you can’t walk around inside. I suspect everything they’d found there was in the museum I’d not been able to look around. Ten minutes later I was done, and on my way to the Touzla Mosque. 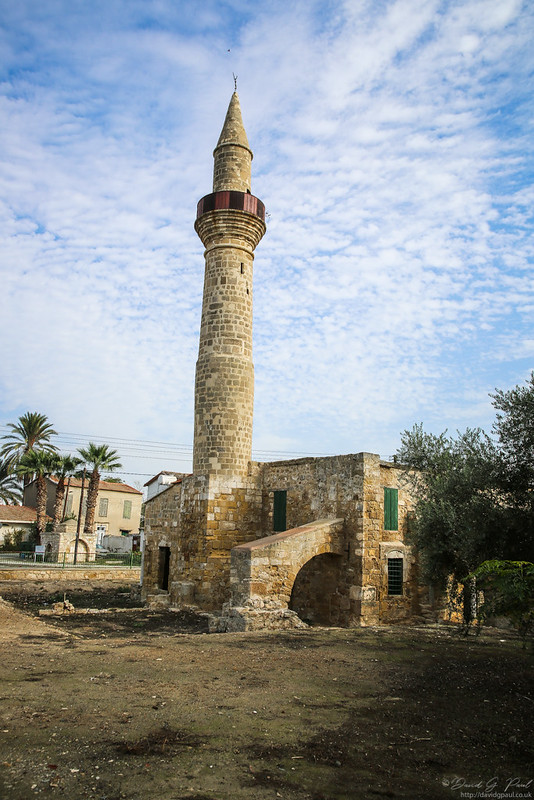 The mosque doesn’t seem to be used any more, which is a shame as it’s got quite the history. It started off as a Byzantine Orthodox Church, then around the 13th Century it became a catholic church which it then remained until the Ottoman occupation in 1571 at which point the bell tower was destroyed and replaced by a minaret. I think it’s one that might have been quite interesting to see inside, but it was closed. I wasn’t sure whether this is because the public generally aren’t allowed in, or whether this was due to the pandemic. I also came across the water fountain across the road from it, which is apparently Venetian.

It was only 10:15 now and so much of the day remained. I’d thought of taking the bus to Kamares aqueduct as it’s quite a trek, but with how much time I’d got I thought I may as well walk there - maybe I’d find more things to see along the way. At some point, I decided it’d be better to head towards the Larnaca Salt Lake viewpoint first, and after leaving a housing estate, this route went through what appeared to be a combination of waste ground, and very expensive looking houses that are likely to have been recent builds.

This led onto a bit of a nature trail where half the path was compacted sand, and the other half was gravel. To my left almost constantly were tall reeds that I couldn’t see past, but eventually I got the viewpoint and could see out across the lake. It was vast, yet through the haze from the heat I could see the far side, and some small cliffs that were much closer. I could see two groups of birds as well. The nearest I decided were definitely not flamingoes, I could tell they were too small, and not just because they were far away. The other group. Maybe. This was the one shot, on the one day that I would have liked my 150-500mm lens with me. It’s a big weight to carry around so I’d chosen not to, not sure if it was worth it for just one photograph.

I carried on around the path, and tried my best to keep to the shade when there was some. It was shaping up to be another hot day, and the sun felt intense when it was unavoidable. I did wonder if this had been a good idea, it seems every single day here gets hotter and hotter, and I’m sure I hadn’t drunk enough fluids on any day. I was also starting to feel quite ready for some food, even though it was still early.

The direction I was heading in was gradually getting me closer and closer to the aqueduct, but whenever I could, I kept an eye on the second group of birds. Eventually it got to the point where it seemed impossible for them to be anything else other than flamingoes, and shortly after I found a well worn path down to the lake. 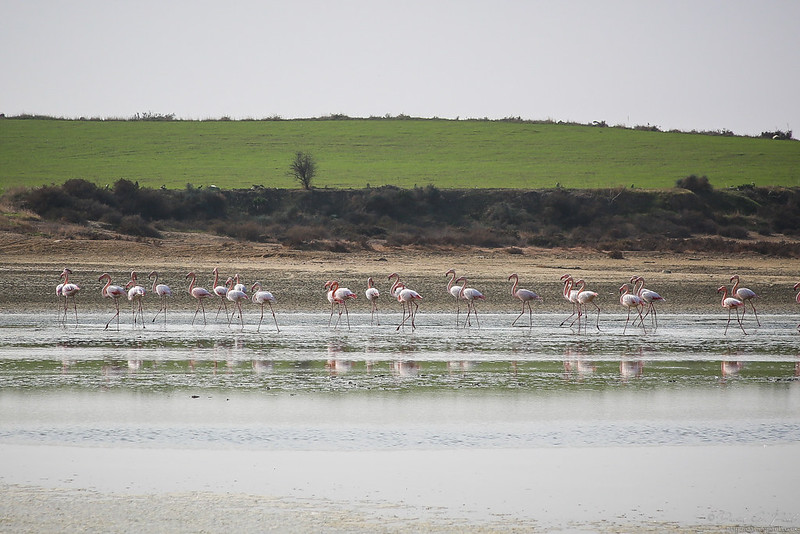 It took a few seconds to decide to follow it. I know salt lakes can get bad quite quickly, but I could see footprints already, so I decided I’d follow this. At first it was dry and crusty with salt with plants around. These plants eventually ran out, and the ground started to change. The further out I got, the wetter it got, and I started to feel the weight of salty sand clinging to my shoes every time I lifted my legs. I was just about in photographing distance of them, but with this lens it wasn’t going to be good.

One of the flamingoes spotted me and started to move, and the others moved with it. I hadn’t wanted to disturb them, and didn’t want to bother them more, so I didn’t move any closer. Instead, I took what photographs I could, and headed back. My hope was that some of the large clumps of salt would wear off during the rest of the walk to the aqueduct, or at least on the way to the bus afterwards. 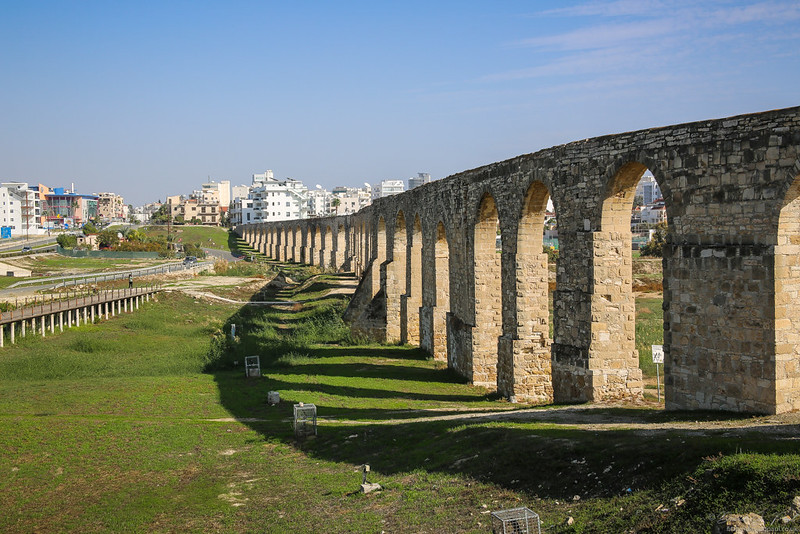 Eventually the Kamares aqueduct came into view. Even though I’d seen it from the bus earlier, I hadn’t fully appreciated just how big it is, and how many arches there are. I walked up close to it, and followed the path around to the top where you can actually see into the small cutting in the stone where the water would once have flowed. I took a few more photographs from the other side, and was done. It seemed Larnaca had nothing else to offer now, and it was time to go back to Lemesos.

I checked on the Cyprus bus website to start with, and it said there was an Intercity bus to Limassol at 11:34 from the nearest - I wasn’t going to make that. However, other than a couple more buses this afternoon, it didn’t list ANY other bus to Limassol. The website was suggesting that it was the last bus to Limassol, but I knew that couldn’t possibly be true - I knew there were more in the afternoon. Maybe the bus wouldn’t stop there in the afternoon. I checked another stop, and that was the same - no mention of the Intercity 45. I’d fortunately taken a photograph of the timetable before boarding the bus in Limassol, so I knew there’d be a 13:00 bus from the Larnaca marina. That was a fifty minute walk away, but at least I could be absolutely certain, or at least as certain as I could be, that a bus to Limassol would be leaving there.

I should probably have stopped for lunch, or a drink, but I kept on going as I didn’t want to risk missing the bus. Though somehow I found time to buy a Toblerone ice cream on passing a kiosk. I did of course make it back to the Marina with forty minutes to spare, so I’d have had time to stop and eat sooner, or even to walk slower. I sat down in some shade there and had lunch, followed by a mango ice cream I bought for €1.30 from the shop whose wall I was sitting against. Two ice creams in one day may seem excessive, but it was a warm day after all, and only my fourth one in seven days of a holiday - I’d barely had any during my Germany trip. 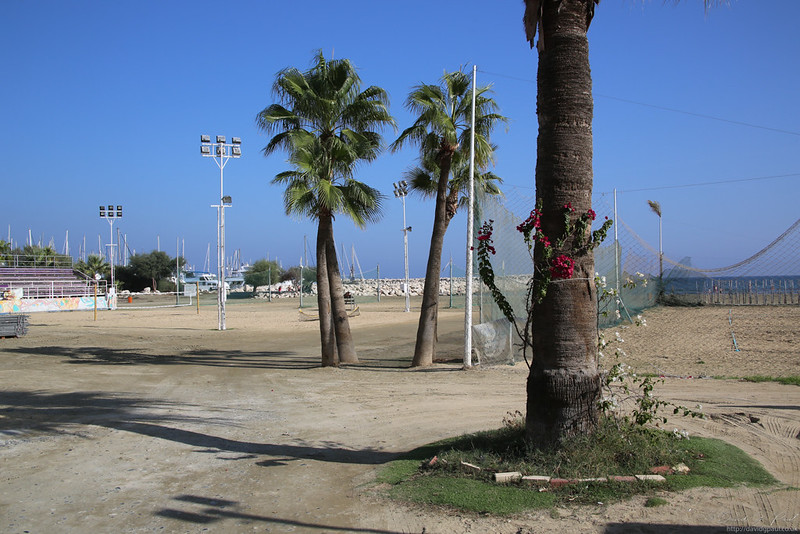 Just before the scheduled time of 13:00, I was back on the bus and it was on its way to Limassol. Around an hour later I got off near the Old Port and walked back to the hotel, buying a souvenir fridge magnet for my parents on the way. For the remainder of the afternoon I relaxed, and sorted out the passenger locator form ready for my return to the UK. Having done this once before there were some parts I could copy and paste from last time - but still didn’t bother to create an account with them, even though my next time will likely be very similar to this one.

For one last time I went out into Lemesos for my evening meal, and quickly found a place called Ousia. Their menu was quite varied, and I knew I could easily find something I’d want. I was tempted to try souvlakis, but decided that it could wait until the evening after my race in March. Today I went with spaghetti alla bolognese with plenty of parmesan - good fuel for tomorrow’s long run. It was also good research for the night before the half marathon next year as well.

I then returned to the hotel, and prepared for the end.