The second of my tours booked through Viator had the same start time, which meant the time before this day of adventure would be pretty similar to yesterday. It was another early start to get a run in, whilst also keeping it fairly short. Today my run took me to the River Isa, but in a very long-winded way of getting there as I knew the general direction, but had to navigate through the roads to get there. 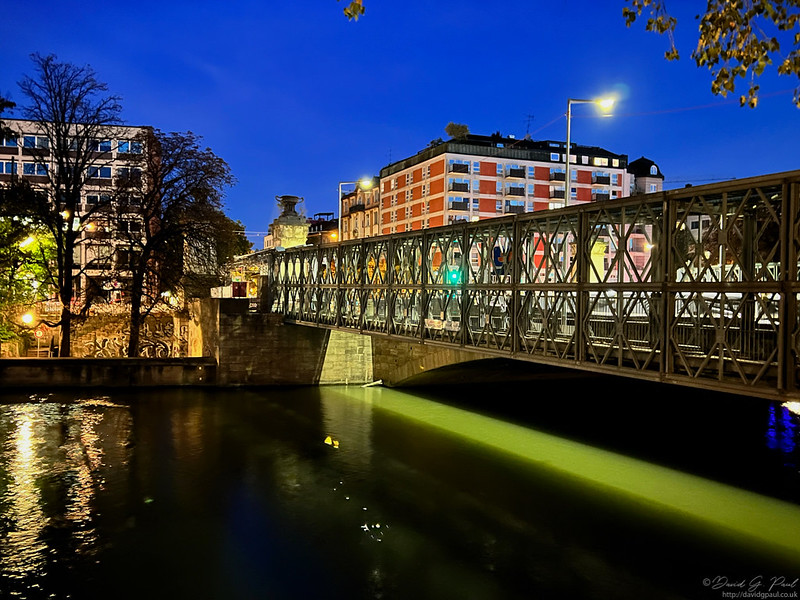 As with the past few days, I made my breakfast in the hotel room, and got ready for the day ahead of me. I got to the bus stop early again as it was at best ten minutes away - there I found it was Elisabeth, the same guide as yesterday, as I’d suspected it would be. It was a different driver though, and not surprised as he'd need a rest! I wondered if there'd be anyone else from yesterday on this tour as well.

The drive to the Eagles Nest was around two hours, with ten minutes spent in Austria as the road crosses the border, and the turning we wanted off the highway took us back into Germany. I won't count this as having been to Austria just yet! Maybe one day I'll get there and see the country properly - if I want to see every country, then that's something I'll have to do.

When we got there, the bus parked up at the bottom of the mountain, and the guide sorted out the bus tickets for the ‘special bus’ we’d paid €28 for when we boarded the first bus. These buses had been modified to better handle this mountain road, and once onboard it took us all the way to the top, along a winding road that took around ten minutes. In terms of price per mile though, this is probably the most expensive bus I've been on. 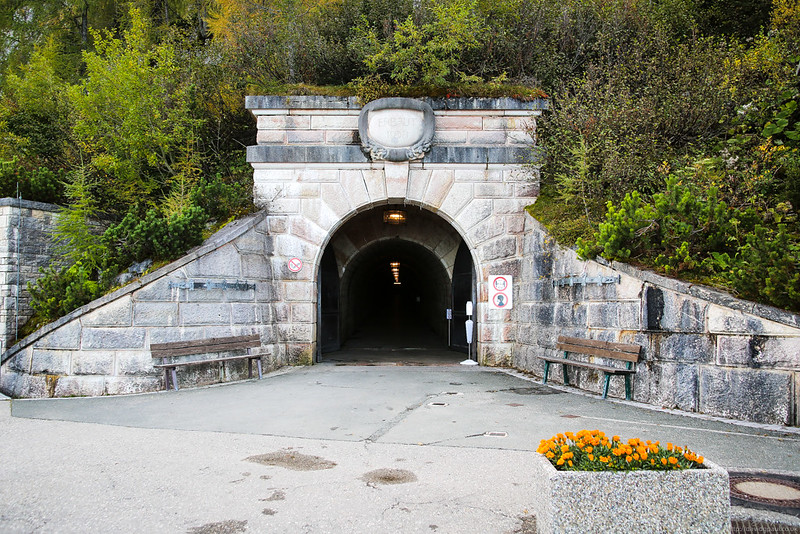 Once off the bus we went straight into a tunnel that said ‘1938’ above it, and in this tunnel the air felt damp, and cooler. It led to an elevator coated with polished brass, and that took us up to the Kehlsteinhaus on the Eagles Nest. This is the only building left up there, which was something I hadn’t realised before. The allied forces dropped hundreds of bombs to destroy the area, but had missed this one as it’d been hidden by snow. When Hitler was defeated, this building wasn’t demolished, partly because it was one he hadn’t liked. 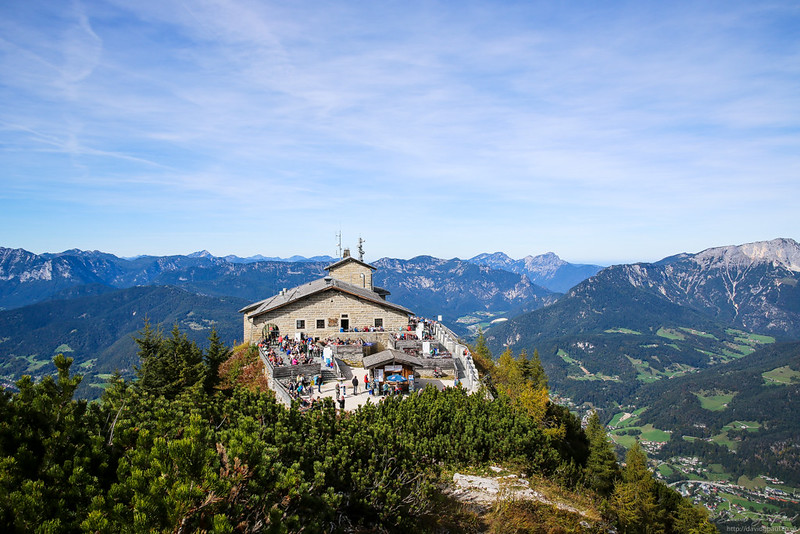 I decided not to eat in the restaurant and concentrated on taking photographs. At first I wondered what to do, we’d got around two hours until we needed to be at the kiosk to walk down to the bus again, but what was there to do? I walked up to the iron cross to start with, and then hiked to some other viewpoints. Again, it was possible to see into Austria, just like yesterday. There was one point where I saw it was possible to hike for 4.5 hours, but without that much time, I only hiked as far as it was worth going - to a different view of the valley on that side of the mountain. This left me with over an hour and nothing more to do - it seemed we’d not have enough time to hike, but too much time to do nothing. 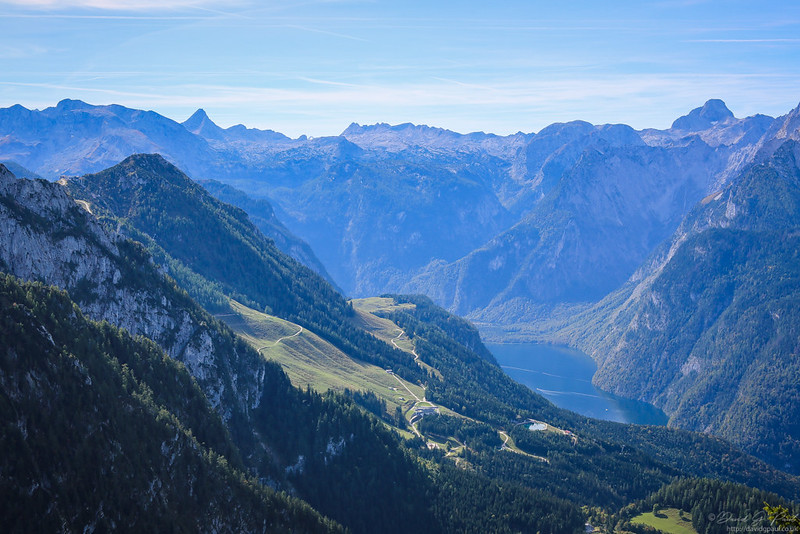 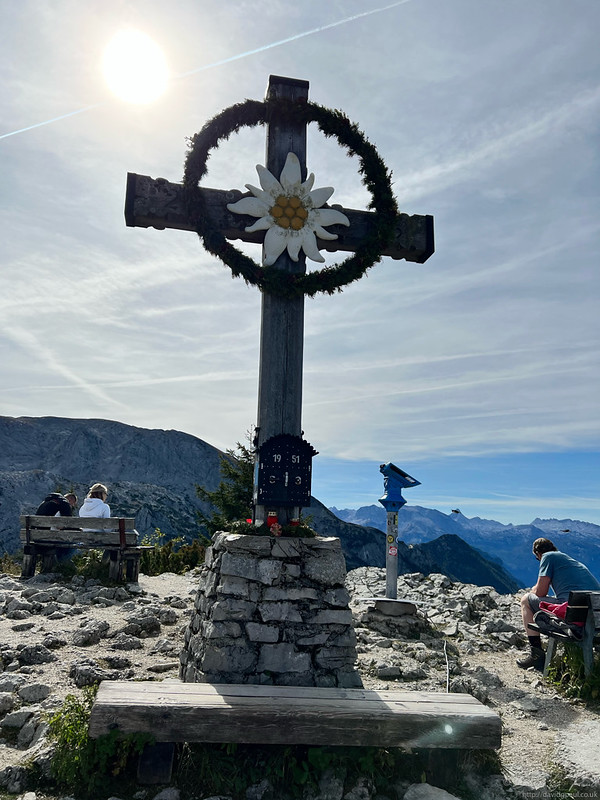 I sat for a while and had some cake from the restaurant for €4.90 which was a bit like herrentorte, and then waited in the sun. It was surprisingly warm at the Eagles Nest, and could see for miles due to the unusual weather conditions here. 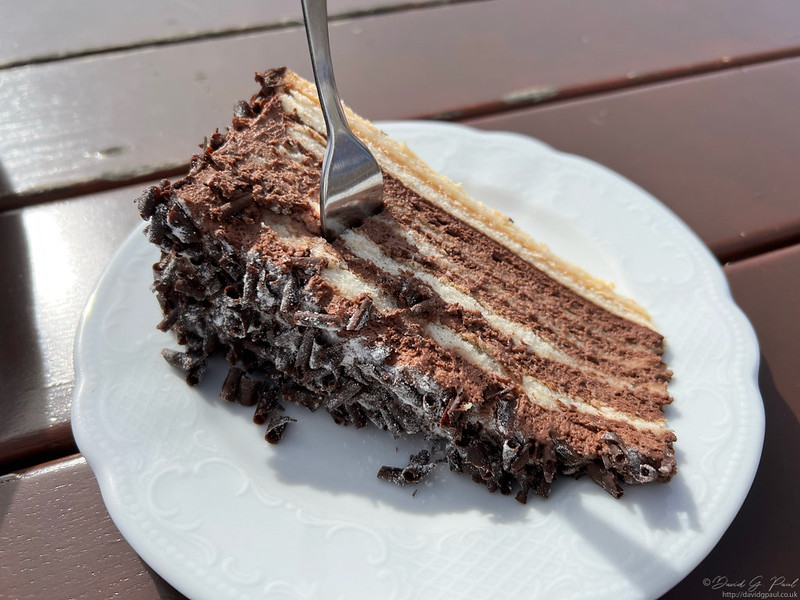 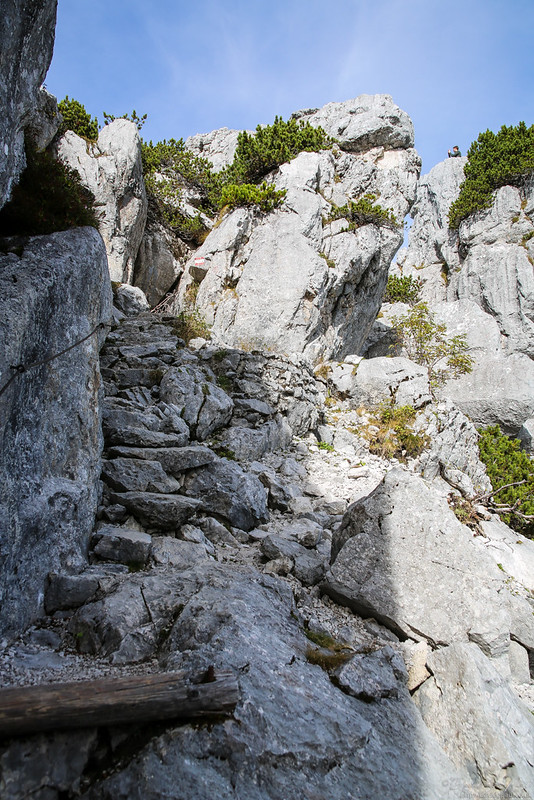 At 14:00 the majority of the group hiked back down to the bus, and there it was pointed out that three circular clearings in the trees are from the start of The Sound of Music, but also that the bells of the church she could hear, and then ran to, are around 25 kilometres away in Salzburg. That’s some seriously impressive running she must have done! 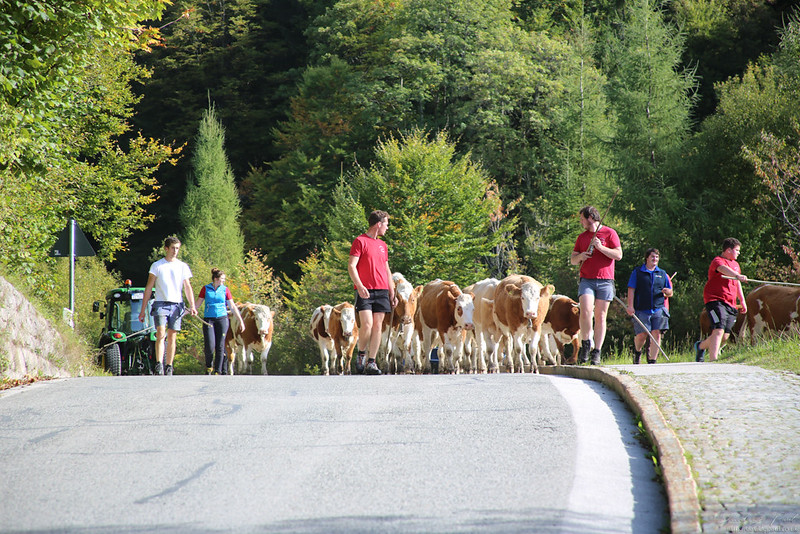 Eventually we headed back down on the bus, and from there we hiked to Berghof, the residence of Adolf Hitler on the Eagles Nest. On the way there we were passed by some cows being herded down from the mountain, and then we passed Hotel Zum Turken which had once been owned by a Turkish person. It was just below this where Berghof was once located - this too had been destroyed. 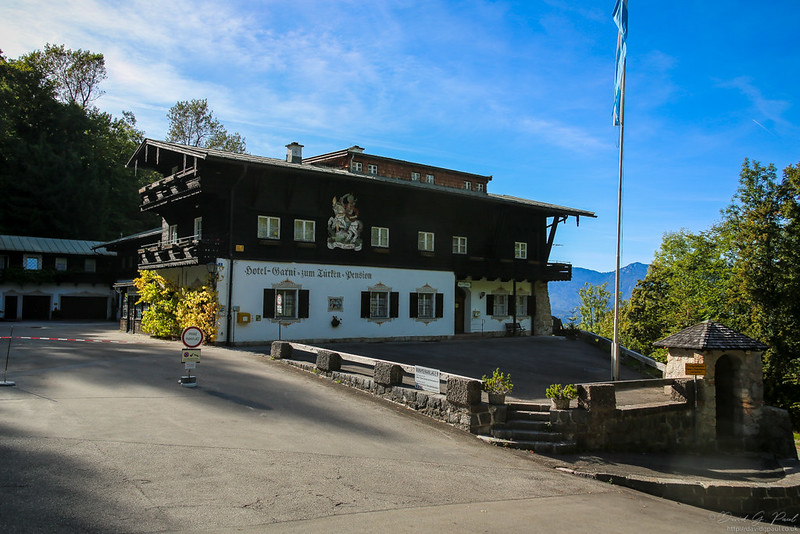 At one point, Berghof had been the place where the decision to invade Poland had been made, and the place where the holocaust was planned. Whilst Dachau had been a place where such evil things had happened, here is where they had been planned. Today all that remains is part of the back wall, and an information board. This information board had been vandalised by Nazi sympathisers. This was obvious from the words which had been crossed out, and the ones which had been circled. It’s a sad situation to still have people that support him or at least his ideas after all this time. Sometimes it seems like too many humans never truly learn the lessons that history teaches us. 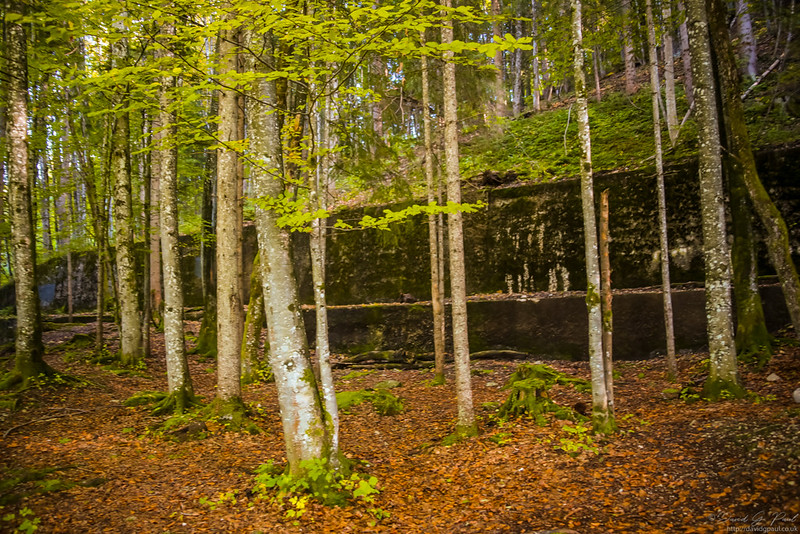 If we’d carried on going, it would have taken us to the Dokumentationszentrum Obersalzberg which also includes access to the tunnel system under the mountain. This was something I did think would have been good to see, but has been closed for some time due to refurbishment. Unfortunately the tour details did not mention that, and still lists it as a feature of the tour. It felt like the day could have been a couple of hours shorter really.

The hike back up was quite steep in places, but it got us back to the bus. On the way back we went through Berchtesgaden, and then headed back to the highway. It would be another two hours until at least until we were back in Munich, so I was expecting this to be around 18:30. This is what the plan was at least - the A8 was closed after an accident so we left the highway and started to pass through small towns such as Bad Aibling that we would never have gotten to see otherwise.

When the bus got back into Munich it was again dark, just like yesterday. As it was later too, I decided the best option for food would be Burger King. I got a Hot Chili Lover Chicken which includes things such as tabasco sauce, and is actually quite nice. I left it as that as I wasn’t really wanting any fizzy drink or fries. It’d make it easier to eat on the walk back to the hotel too. When I got there I finally used my two €5 vouchers to get three cookies and a drink, having one of the cookies whilst I relaxed in front of the TV.

My hope was that tomorrow would be a shorter day, at least it was planned to be.