Today was the first of two tours I’d booked using Viator, so I wouldn't need to worry about anything in theory - I could just relax and go where they took me. It was still an early start though as I wanted to get my daily run in before the tour, and with needing to be at the pick-up point around 08:00, it really was an early start. For today’s run I ran in the general direction of Neues Rathaus and passed that in the direction of the river. I decided to keep it short today, and turned back around that point and picked up the pace where I could - slowing down for road crossings.

I’d still got food left for breakfast from the previous morning, so had that, then got ready to head out to the meeting point. This was a series of bus stops outside of a department store I’d spotted yesterday, so I knew roughly where to go already.

When I got there, a few were already boarding the bus, but there were quite a few yet to arrive as it turned out this was a sizable group despite COVID-19. However, they did make sure we were fully vaccinated before we could join the tour, and everyone had to be wearing masks for the coach ride as you’d expect. So that doesn’t feel too bad really. We also had forms to fill in as per their COVID guidelines - this was like the Luca app, but doing it manually.

During the coach ride out of Munich our entrance fees were collected: €27, preferably by credit card. On the way there we passed the lake where King Ludwig II and a doctor had died under mysterious circumstances after the doctor had declared the King to be mad. I’d learnt about this previously from the Noble Blood podcast, where it’d been pointed out that Ludwig had been a good swimmer, and the water was about knee deep. It really did sound like there was foul play there. Our first stop of the day was actually Linderhof Palace, the only one of his palace building projects that he lived to see completed. 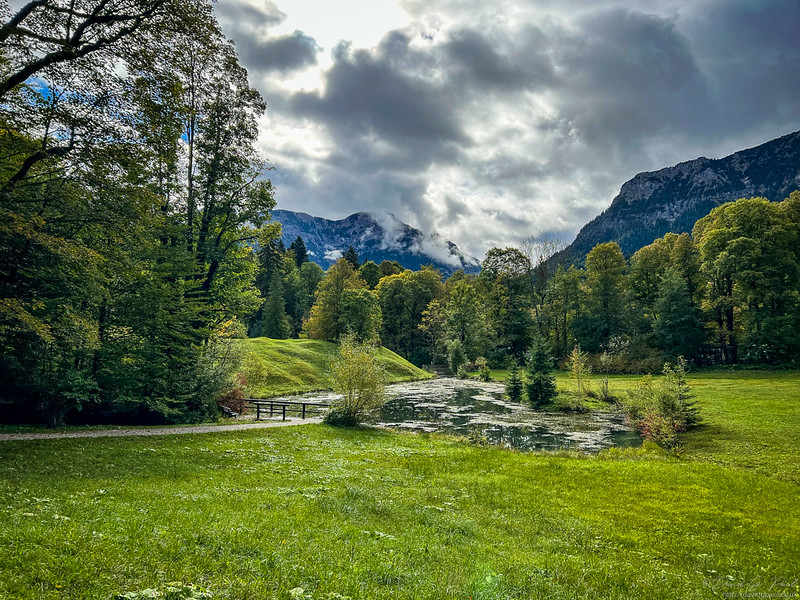 When we got there, the guide got the tickets, and we were grouped into groups of ten, with some groups being for a different language. These group sizes meant it was more pleasant for looking around, but was actually because of COVID-19 restrictions. It worked out well I think. To look at it, Linderhof Palace is like a miniature Versailles, and Ludwig was greatly inspired by that. Although due to the direction of travel your attention is drawn to the palace, if you glance to the other side you’ll see a tiered garden with water features at different levels. This garden in Linderhof Palace, also reminded me of the one of Peterhof Palace in Saint Petersburg, but again this one is still so much smaller - I supposed because Ludwig lived a relatively solitary life. 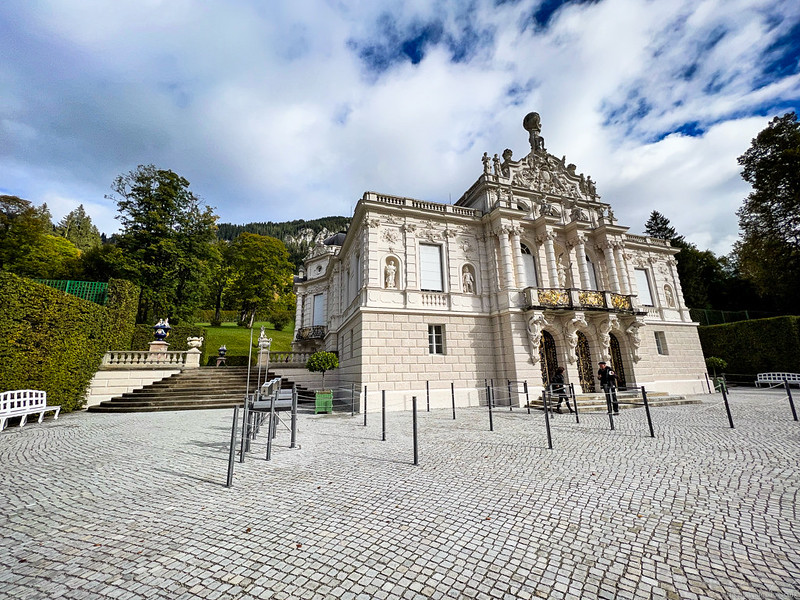 I’d got tickets for the first tour so I queued up and went inside. Photography wasn’t allowed in here, but there was a lot that would have been nice to. On either side of the staircase are vases he’d been given by the Emperor of China. At the top of the stairs we were led clockwise around from room to room until we were back where we’d started. One of the notable rooms in this palace was his throne room, which whilst small, was there mainly because Versailles had one. I also noted they had the same towers in the corners of some rooms, which in Peterhof had been used for heating food. 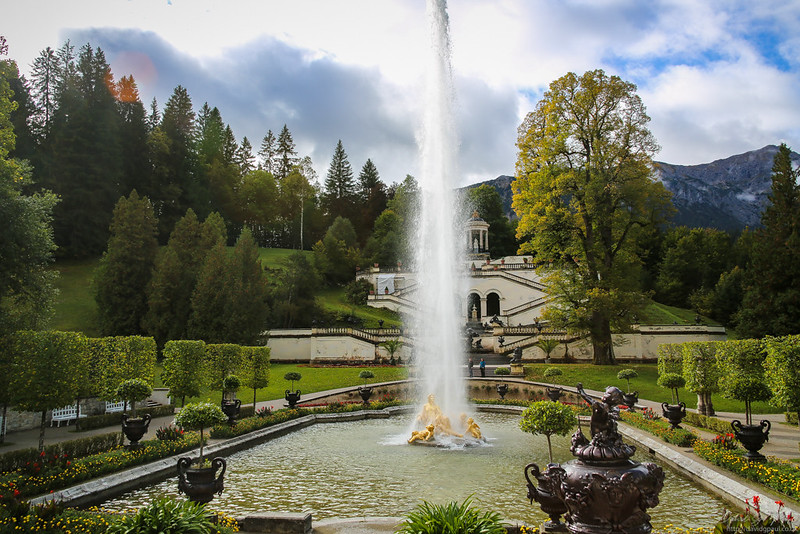 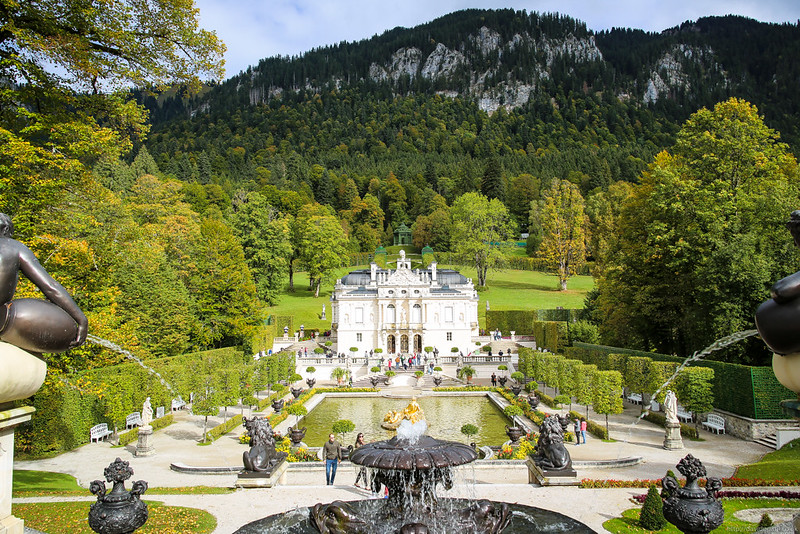 Once back outside I spent time walking around the garden and taking photographs of the various features before heading back to the bus with time to spare. Fortunately everyone else did too, which meant we’d got time to visit the village of Oberammergau. This village is famous for its ‘Passion Play’ - a five hour performance on the life of the Christian biblical figure, Jesus Christ.

Starting with the time of a plague, Oberammergau was untouched by it, and they thought it because of them having done this theatre performance, and so without a scientific explanation, they decided to perform it every year since then. In the years since this time, it moved to every 5 years, and now every 10 years. The rules for this performance are that the actors must be from and live in Oberammergau, and can only play Jesus once in their lifetime. We were told however that the performer from 2010 would have been playing in 2020, now delayed to 2022 due to COVID, because he’d done such a good job they wanted to make an exception. 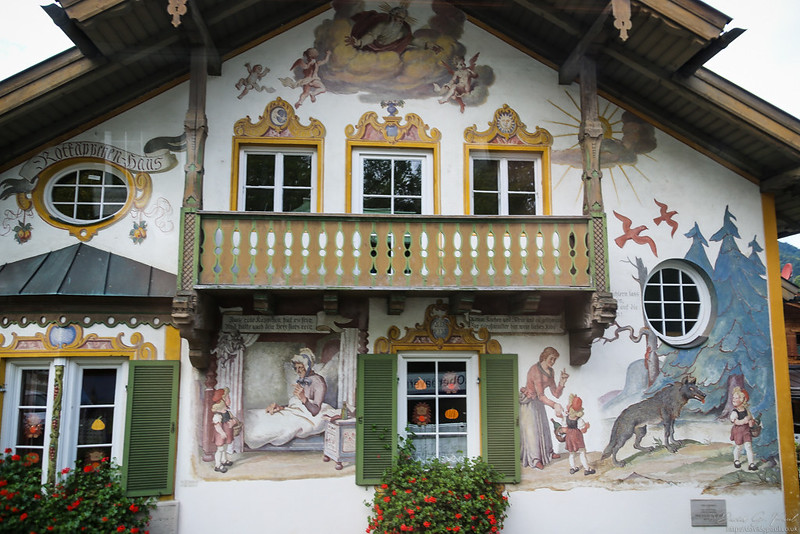 When we arrived in the town I photographed some of the Lüftlmalerei house paintings, and the Passionstheatre, before finding my way to the church and photographing that. We’d got 25 minutes in total, and I arrived back at the bus with around ten seconds to spare. So, with a bit of quick walking I’d timed it okay! It was around lunchtime by now, but we’d been told we’d be able to have more time for lunch when we reached Neuschwanstein Castle, and that’s where we were headed now. 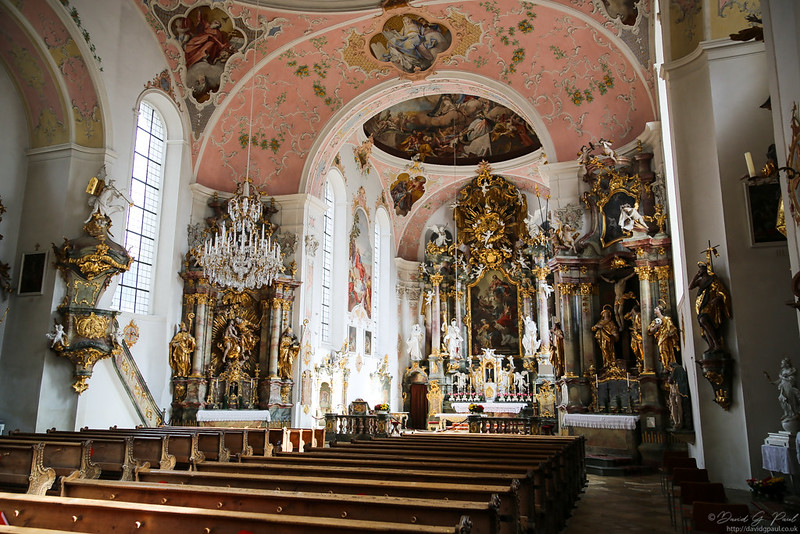 We arrived at the castle and parked up around 13:15, and had until 16:50 to be back on the bus. My tour time was 15:10, and I had to be in the courtyard ten minutes before that, so I’d got a lot of time to explore. There’s a lake in the town that I photographed first, and then after buying an ice cream I started on what is reported to be a forty minute hike up to the castle. I stopped a couple of times for photographs, but was at the top long before I needed to be there. Just near the top there’s a couple of souvenir shops, and a restaurant. There’s also a viewpoint near the lockers, as you’re not allowed to take large backs into the castle when it’s your turn. I’d left mine on the coach so I was okay. 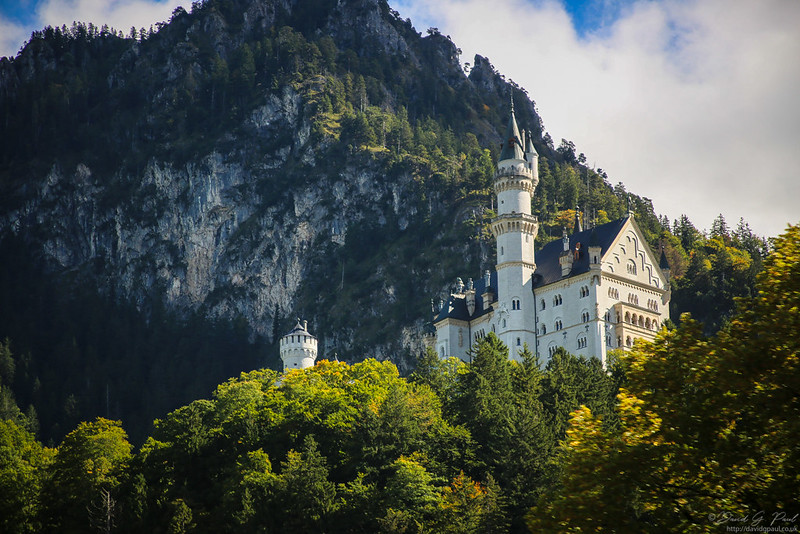 I photographed the castle on passing, and then carried straight on to the next viewpoint. This one wasn’t as good, the path to Marienbrücke was closed as well due to repairs on this old bridge. It was seeing this name that made me realise the name of the Lüftbrücke stop near Berlin’s Tempelhof airport literally meant ‘air bridge’. This bridge was the best viewpoint too unfortunately, so I started on the path to Ludwig’s lodge on the mountains in case there were other views there. It had a picture looking down on the castle, and I thought that might be pretty good. 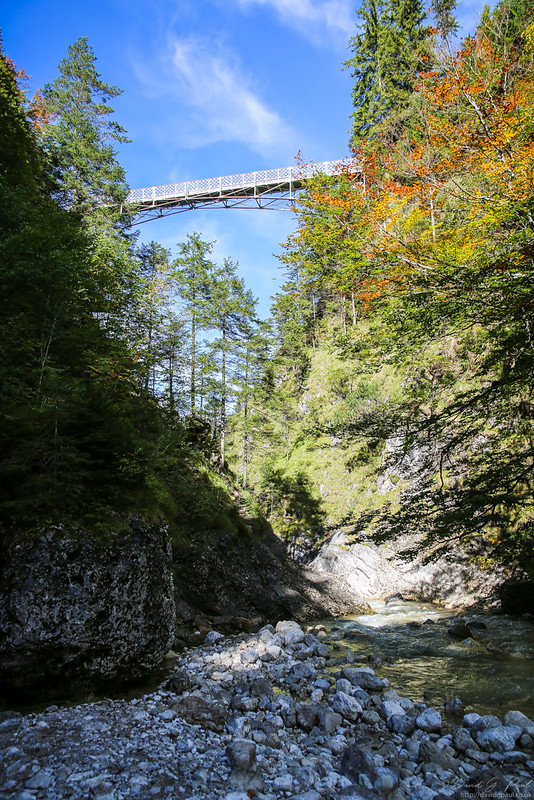 Shortly after starting on this path, I found that some people had followed a trail down to the Pöllat river, so I went down there too, and navigated the rocks on the river, including a bit of climbing, but found that the closer I got to the Pöllatschluct waterfall, the wetter the rocks were, and I didn’t want to risk going further. I’m sure the ones I’d seen would have had the sense to have turned back by that point too. This meant turning back without getting the photograph I wanted, but sometimes that happens. Not everything goes to plan all the time, and I still got other views of the castle - just not the fullest view of it. A photograph is not worth taking a risk.

Once back on the path I carried on for as long as I dared to, not quite making it to the hunting lodge before I had to turn back. When I got back though I found I could probably have kept on going for another 5 - 10 minutes as I’d got more time than I thought. Looking at the map afterwards, I did wonder if those minutes would have been enough or not. I was close, so close. 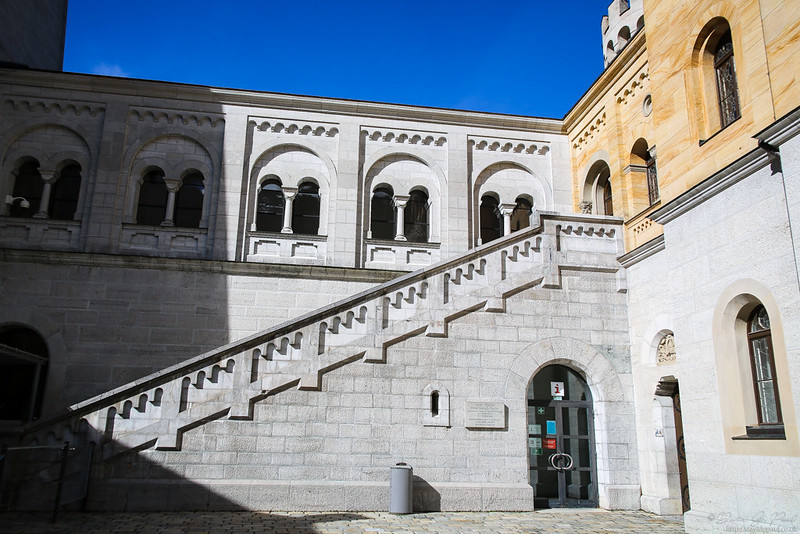 When the time came for the tour of the castle, I had to show my proof of vaccination again, and then entered the main courtyard. Here photography is allowed so I took as many pictures as I could, before starting on the tour inside where we could not. The tour starts with going up some stairs, and then on that floor we get to see a few rooms, and do have to go up more stairs during the tour too. It’s amazing how many floors this castle has!

Whilst there, there was someone working on restoration of small details on the throne room wall, and in this room there was a lot of scaffolding too due to all the work being carried out. There is also a grotto where we could see electric lighting, and glass for an open air part of the castle. The next room even had a telephone, but being the first one in Germany he’d have nobody to call. Ludwig II was very keen on technology, and he dreamt of people being able to fly one day, yet was deemed mad. Perhaps he was just born too soon. How many people do we believe to be mad because we don’t understand them?

At one point during this tour, one of them from the group was asked to step aside, and whilst the castle guide questioned them about their cough. They were told they should not have come on this tour with any symptoms of COVID-19, but they insisted it was not. I guess it’s a positive that they are this concerned for people’s safety.

Once the tour was over, there’s a viewing balcony where to the left we could see the Aussichtspunkt waterfall and Marienbrücke, whilst straight ahead we could see across the Alpsee to Austria. It’s a country I knew I’d be seeing again soon, when I visit the Eagles Nest. 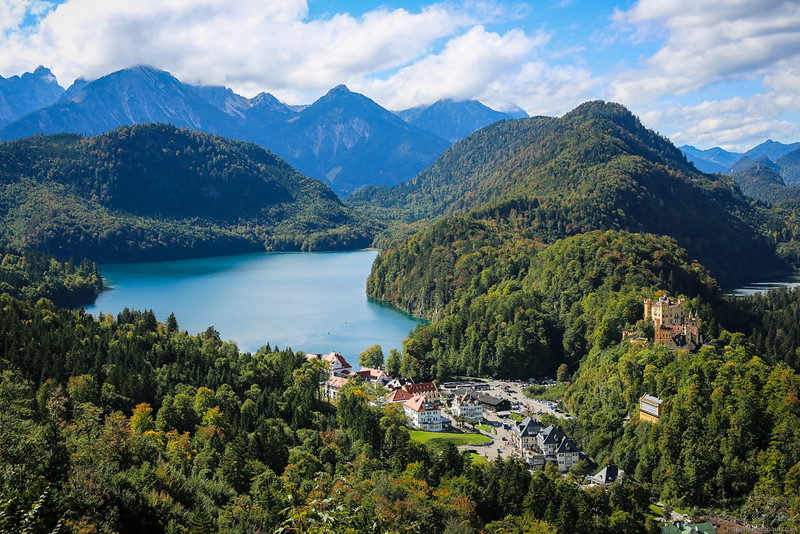 I then walked back down to the bus and waited for thirty minutes to pass for the journey back to begin. This was a long drive, taking over two hours, and during this time we were told more about Ludwig II, and how his friendship with Wagner had meant we got to hear more of his opera, and how he’d established the technical college in Munich. He may have been considered mad during his time, but he’d done a lot for Bavaria.

The bus got back into Munich around 19:10, as the sun had already set and darkness was closing in. I decided not to spend too long looking for somewhere to eat, and went straight to the Bella Italia I’d passed the night before. The lasagna I ordered arrived around five to ten minutes after I’d ordered it. Some of it was cold, some of it was burnt. I was hungry enough to not really care, and I knew if I tried to tell them they wouldn’t have understood me anyway - it’d been hard enough to order as it was. Within fifteen minutes of having been seated, I was done, and five minutes after that I was on my way back to the hotel as another day was over.