Today would be a slightly different way of seeing a town to the previous days in Germany. When I left Munich I would be sightseeing in Rothenburg ob der Tauber, but my overnight stay would be in Frankfurt - this would be sightseeing whilst ‘passing through’, even though it was a slight diversion to get there. I was very much relying on the hope that the station would have luggage storage. 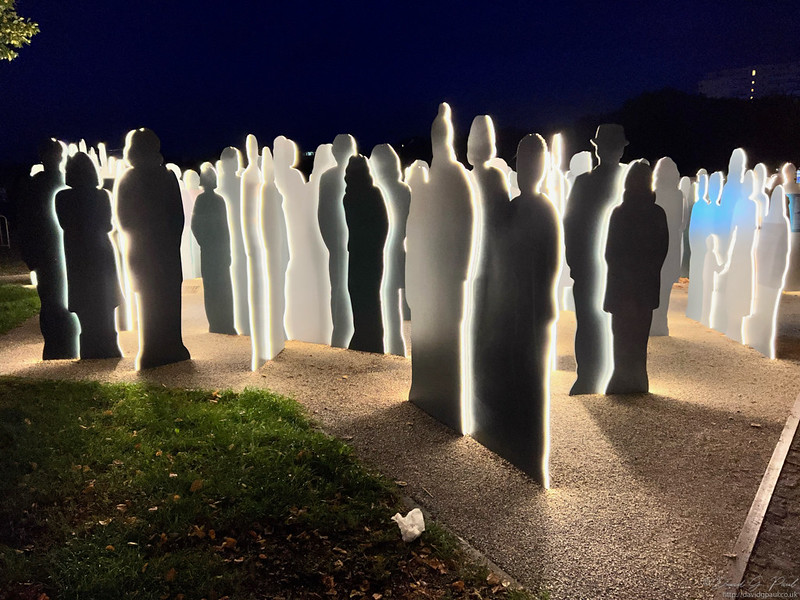 It was yet another early start so I could get in my daily run, this time choosing to head in the opposite direction to the previous days, and finding a park to do a lap of. Once I’d sorted out some breakfast, I then made my way to the Munich train station to catch the RB16 train to Treuchtlingen - the first of three trains I needed this morning, and the first of six I’d catch today. Despite the number of trains to catch, the distance was relatively short compared to the days ahead, even though this would be the most distance covered by train in a day so far.

This first stretch was just over two hours long, and in Treuchtlingen I had just five minutes to get off the train, find the platform for the RB80 train, and board that. I realised this was going to be a tight connection, but I figured it could be done as long as the station was not too busy. Sure enough this wasn’t a problem, and I found a seat on this several minutes before it left the station. At least this one would only be 65 minutes to get me to Steinach. I realised that with every train journey now, I’d be getting closer to home. Not just in terms of the days passing by, but the distance too.

As I got off the train at Steinach I spotted someone who had been on the same tour as me to Neuschwanstein a couple of days previously. It’s not often I bump into people I’ve come across previously, at least not knowingly. I had another train to change to which would take me all the way to Rothenburg ob der Tauber and would terminate there. It’d been quite a journey getting that far, but now I had just over two hours until I’d need to be back at the station for my onward journey. I stored my luggage there for €3 in one of the lockers on the platform, and got walking. 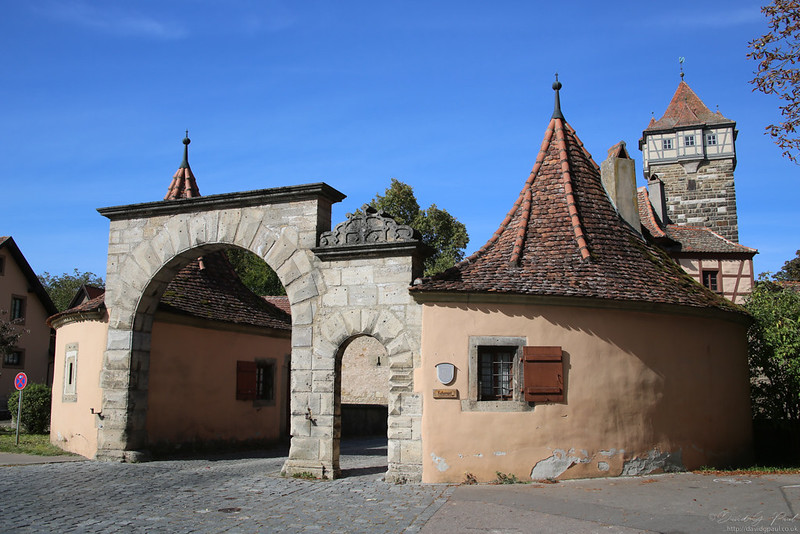 I’d decided that here I’d find somewhere for lunch after having seen the sights, unless I passed somewhere along the way. It wouldn’t be until reaching Frankfurt when I’d go back to buying from supermarkets as I’d wanted to travel as light as possible today. Not long after photographing an ornate archway into the town, I spotted a bakery so decided I may as well look at what they had. I brought a bretzel, and a Schwarzwälder Kirschtorte - another to tick off my list. I’d ordered them to go, but the cake was sadly a casualty. It fell on the floor just as I was about to eat it. A tragic loss, it deserved better. 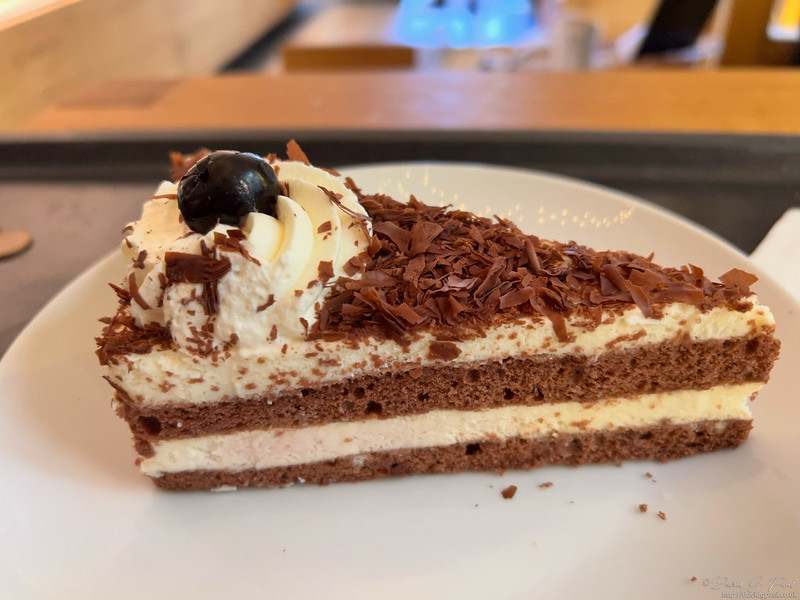 With lunch cut short, I carried on walking around the town, photographing random side streets until I found my way to Marktplatz. It was very busy there and I was never going to get a photograph without people in, so I did what I could and moved on down the hill to St. James Church and a gateway out of the city. If I'd thought ahead, I should have carried my tripod around with me and used an ND filter with a long exposure to get a 'ghostly' figures effect so the focus would be on the surroundings. I hadn't expected it to be needed though, so I'd left them both in my suitcase.

Looking behind me, the old buildings looked like they were straight out of a medieval story. I followed the path down along the outside of the wall, and re-entered at the Klingentor gate. This way it took me past St. Jacob’s Church. This has a small metal statue outside, and they charge a small fee for going inside. They don’t however let you up the tower I later found out. 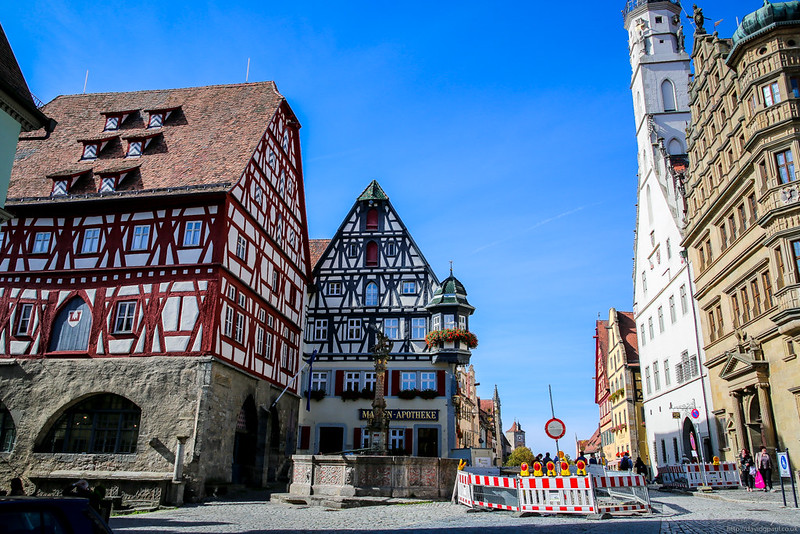 At this point I decided to go back and get another slice of Schwarzwälder Kirschtorte, and this time protected it by eating indoors. This meant showing them I’d had both doses of the vaccine, and required a check-in on the Luca app.

After that I went wherever my legs took me - I found my way to Plölein which was the last on my list of sights to see there. The sun however wasn’t in a great place, and it was so crowded too. I feel the best way to get a decent photograph there is to stay overnight in the summer, and get-up early to get a photograph just after sunrise. It worked in Croatia, so I’m sure it’d work here too if I'd thought about it. 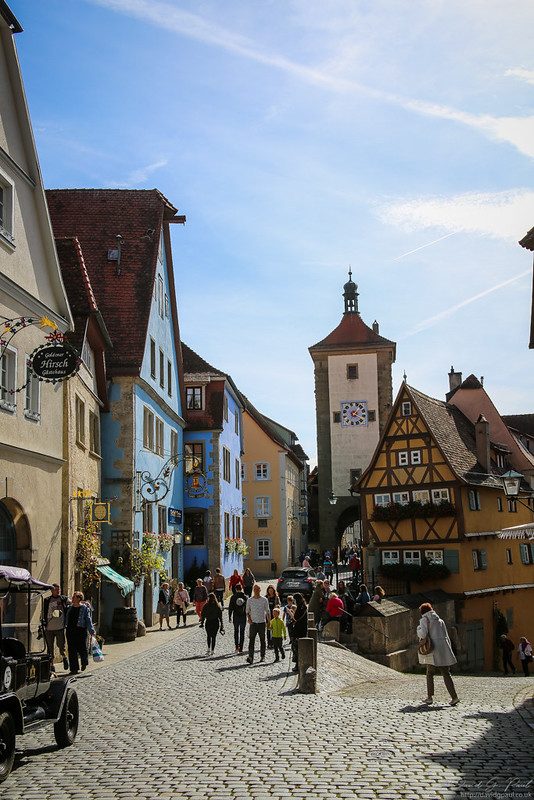 Feeling that it was better to come back later, I carried on through the gateway and found a side street that took me up onto the wall. I followed this around to a gateway into the city called Spital Gate. There’s a few bits inside to see, and they have a few cannons there as well. I then wandered back up to Plönlein, trying to get a better photograph. No matter where I tried to position myself, the sun was just in the wrong place, so I did the best I could. 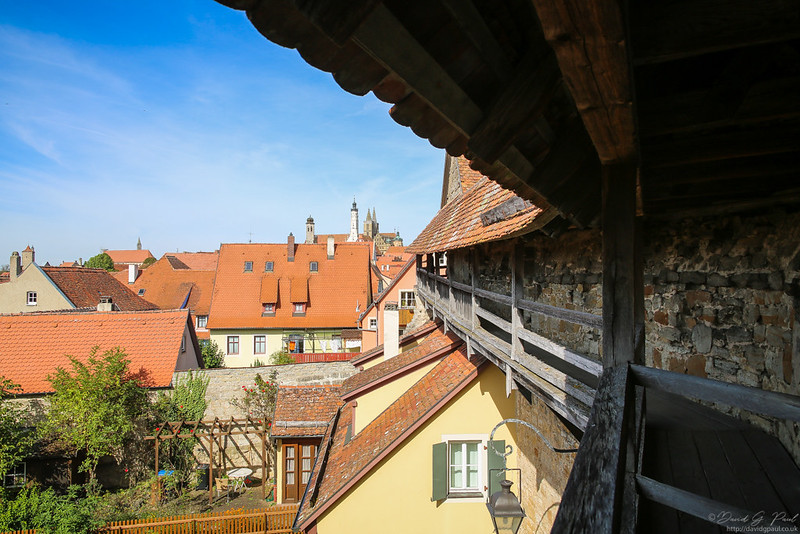 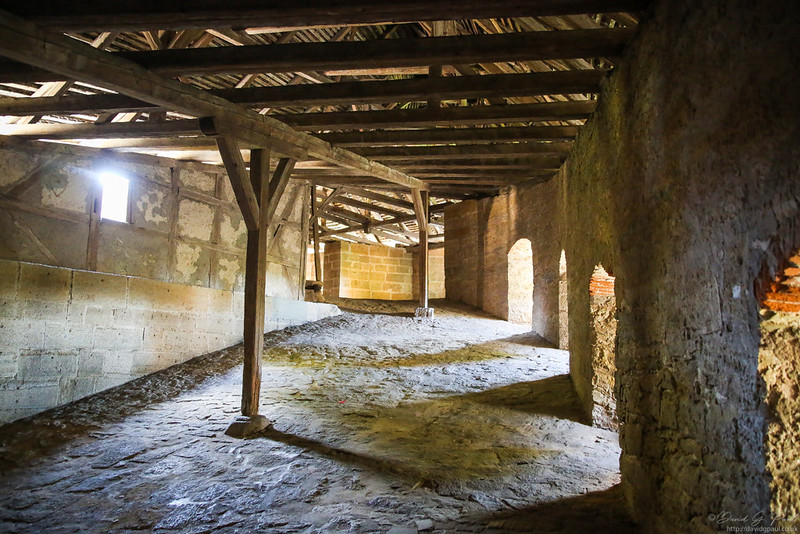 Down another side-street, alongside the St. Johannis church and the Medieval Crime Museum I took a few more photographs, and at that point felt I needed to look at a tourist map to see if there was anything else to see. It was then I bumped into the same person again who I'd been on a previous tour with, but this time I spoke to them. They were looking for a high point to see the town from, and that sounded like a good idea so I asked if I could follow them.

We tried the church of Saint Jacob first, but at that point we found they don’t allow access to the bell tower. They told us the only other tower is the one at the marketplace, so we headed back there. Unfortunately the tower there was closed, so it seemed there was no way to see the town from high up at this time. Neither of us had anything left to do, so we made our way back to the train station, I collected my luggage, and we took the train Steinach. Whilst I was then taking the RB80 train on to Wurzburg, they were going to spend the rest of their day in Nuremberg. It'd been a pleasant chat, and I'd wished I'd spoken to them sooner as it sounded like we'd both got quite a few travel stories. 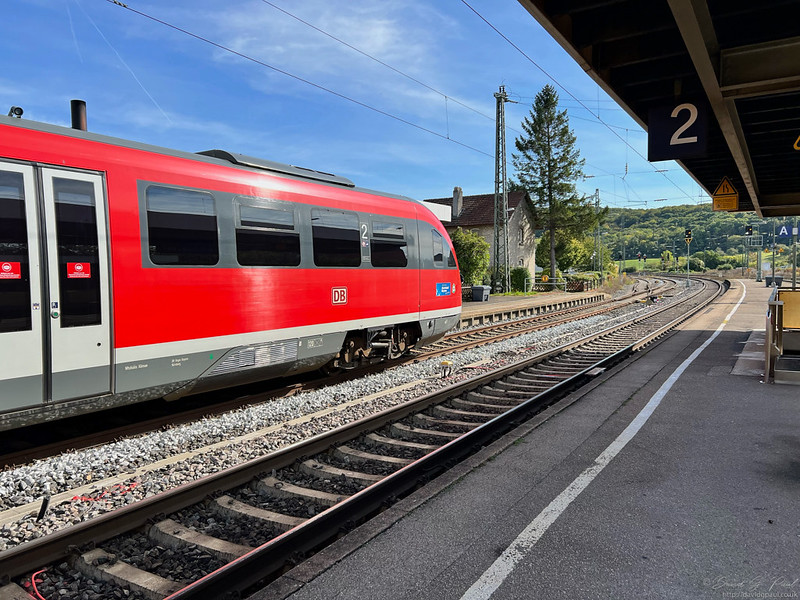 This journey wasn’t too bad, and from Wurzburg I boarded the ICE 624 to Frankfurt. At least now I’d be on this train until my final destination, and no stops. No need to keep checking the DB application to make sure I was going the right way. Unfortunately though, some maintenance work on the tracks meant there was a 15 minute delay on this journey, so the train had to stop and wait a couple of times anyway. I guess considering there have been so many things that could have gone wrong on this adventure, a train delay isn’t too bad. One thing I did learn on this journey though is that with seat reservations, ‘GGF. Reserviert’ means ‘Possibly reserved’ - in otherwords, any available seat could be reserved up until the point the train leaves the station as the DB booking allows you to reserve a seat up until that time.

When I got into Frankfurt it was 17:19, and I’d got over an hour until sunset. I rushed to the hotel, and waited around for someone to appear at the reception of the ibis Styles Frankfurt City. Once I’d paid and checked in, I dropped my bags in the room and hurried out, having figured out where sights were on a map during the elevator ride down to the lobby. 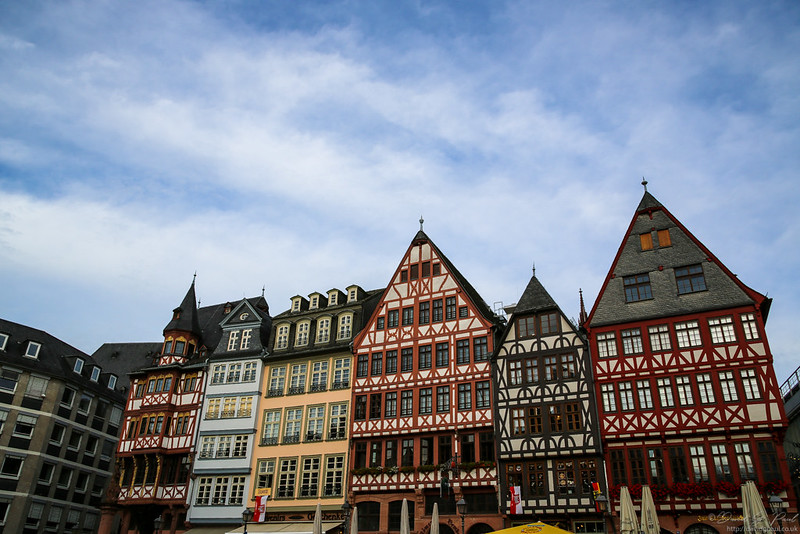 On my way there I came across other buildings that were worth photographing, and then photographed the nearby River Main. From there I went to Römerberg which is a street filled with historic buildings on a very busy square. First thing I saw was a small medieval church, and then the town hall, which really stands out. There was some sort of protest going on which I didn’t understand, but I carried on photographing the decorative, colourful buildings around.

Finding my way to Alte Oper, an opera house, wasn’t too difficult either, and there was a different group there, which I could tell were protesting something different. There was a police presence at both, just like there would have been back home. From there you can also see the tall buildings of the financial district, so once I’d seen them I decided it was time to get some food. 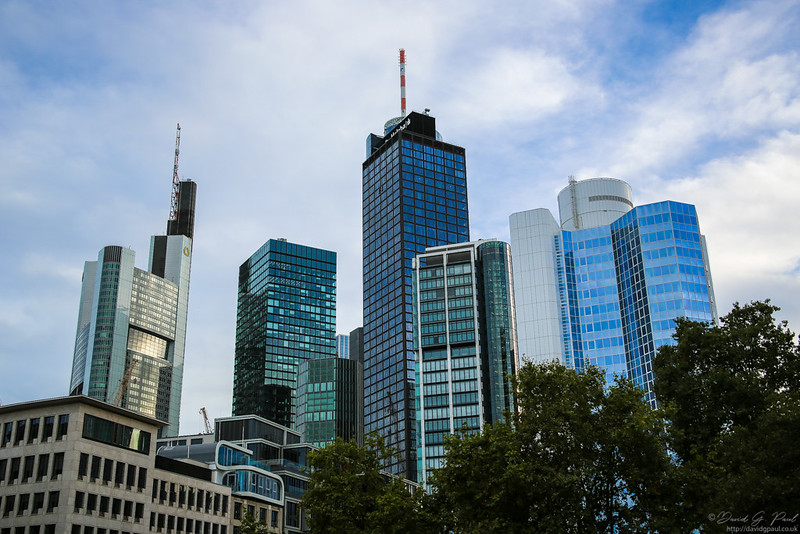 There are plenty of restaurants selling foods from all nationalities, so I looked at everyone I passed. To start with the best options had been Italian or Vietnamese, but eventually decided that as I’m in Germany I’d eat at Cafe Hauptwache as they did German options. I went for the Chicken schnitzel, and although it took a while to get served, once I was served, the service was good, and also quite quick. It cost me around €17.90 for the meal with a non-alcoholic drink, so the pricing wasn’t too bad either.

I then headed back to the hotel, and for the first time in days was able to relax there from 19:15. That is, I would have been more relaxed had it not been for the incredible noise from outside, and realising the extremely thin curtains were more of a net curtain, and wouldn’t offer any privacy, or even keep the morning sun out - not that I’d be in the hotel at this time. The banging of doors seemed almost constant, and these were not quiet doors; they sounded like big heavy doors slamming shut with an almighty thud. It may not have been the worst hotel I’ve ever been to, not the noisiest, but it was by far the worst ibis I’d stayed at, and this wasn’t even a ‘budget’ one.