Over the last three races in this series I've finished consistently with a time of 19.11; but in positions 6th, 4th, and 3rd. Ideally I'd be improving time rather than position for this last race; but what was the liklihood of that happening whilst deep into marathon training. It was my 5th consecutive day of running, with the first of those being a muddy 14 mile training run that expended more effort than expected. It was at least fortunate it wasn't a marathon having been on my feet most of the previous night (see Kill Team Game 4), and there was potentially even better luck in that it was the coldest it'd been for any of the races in this series. Winter was here, and I wanted to stay at home where it was warm, with the nice smell of food slowly cooking.

Reluctantly I headed out into the cold, dark night and did a half mile warm up on my way to collect my race number. I was in a bit of a rush due to heavy traffic from a road closure; but still had time to get the legs ready. When I got to the start line they'd just been passed gritting the path ready for the freezing temperatures.

I started off perhaps a little too quickly and for the first 0.2 miles I was leading the 10K race. Like that was ever going to last long. Two runners soon overtook me on that straight outside of the park, and one of them was off like lightning. Dropping down to third was perfectly fine with me - I just wanted to try and get a top 10 finish if I could, and to have just one race with a better finising time. I lost some more time during the dark straight through the trees because for some reason no matter how much I tell myself to not slow down in the dark and to trust I won't hit anything; I still do. The only alternative is racing with a headtorch; but I keep forgetting to get some batteries charged.

As work on the cycle path through Victoria Park was now finished it meant that the route was back to what it had been in the first race of the surface. The few seconds running on the cycle path actually felt like it'd make a good running surface too. I'd done this first mile in 6:04 and was concerned that without the usual sub-6 minute miles I wasn't going to be doing well at all. In fact, outside of this race series it's been a few years since I've raced a 5K or done a parkrun without getting at least one sub-6:00 mile. Oh well, as long as I keep going at least I'll finish, and perhaps it'll be an okay tempo run overall.

Once back around to the path passed the University that leads around to the start of the second lap I glanced behind me to see how far behind the next runner was. It looked like I'd got several seconds on them, so was content to maintain pace for now; maybe I could try and speed up later. Underfoot was the crunching noises of the grit that had been put down before the race - I was careful not to turn too sharply just in case it created a slippery surface. Once onto that straight outside of the park I was starting to feel like I'd had enough, and just wanted to finish. It did however feel like I was catching up to the runner in second place, and once onto the dark straight I was certain of it.

After having spent most of the race in front of me, I was hoping he'd find a second wind and would push on harder; but I was catching up with every stride. By the time I'd reached the cycle path for the second time I'd overtaken and was now gradually pulling in front. At the next right turn I glanced behind me and could see he was now a few seconds behind. I was torn now between speeding up to a sprint and risking 'exploding' (not literally, that'd be messy) before the finish, and finishing comfortable. Realising I'd got time I decided I'd finish comfortably and would only speed up now if I felt I needed to. 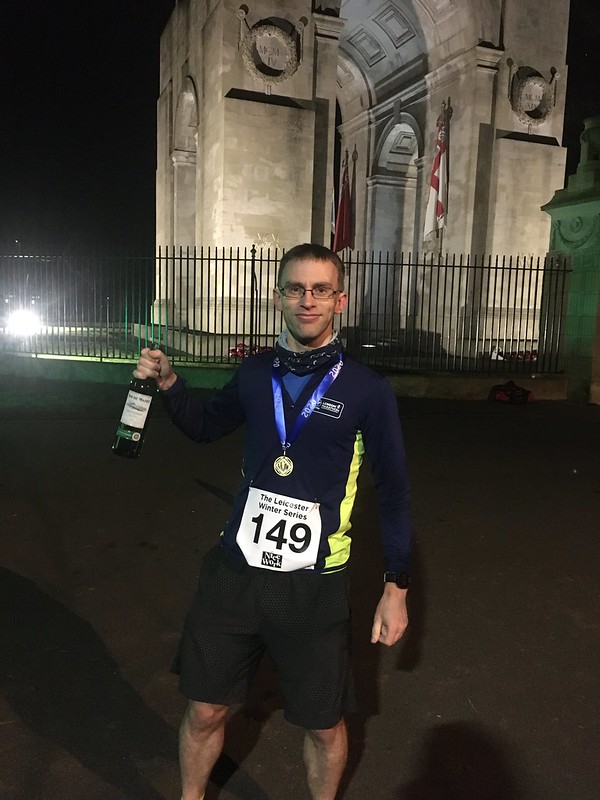 I finished in 2nd place overall with a time of 18:49 out of 43 finishers. I'd actually done it, and had improved not just on the previous race's position; but the time as well. Still slower than I'd like - it'd be nice to be in touching distance of that sub-18 again; but this is a step in the right direction at last. After the race I got a bottle of wine (which I've given to my Dad as I don't drink alcohol), and then found I'd also come in 2nd for the race series! That was a complete surprise! As a result it looks like I will be back doing the next winter series for the 2020/21 season. Also, congrats to Robin who also won a prize in the Senior age category!