As the days got shorter, the nights were getting longer and colder. I knew when booking to do all four races of the winter series this would be the case, and how much effort it takes for me to make it outside when it's cold. It's always worth it though, which is why I booked this race series: for that added motivation to work hard through the winter months.

I'd managed 6th place last month, so this month I wanted to see if I could do better; but only had two proper weeks of speedwork before it was time to ease off ready for racing again. This time though, I knew that whatever I did in this race could have an impact on my half marathon at the weekend. I'd decided my focus would be on this race - if I put in around 80% or more effort then my legs might not be good enough to do well on Sunday; but would recover enough to do okay.

As I waited for the race start I listened to the wind howling outside, and really didn't feel like racing. I knew if I didn't though that I'd regret it, and I'd have missed out on a training session anyway. Reluctantly I headed out to collect my race number, and to get my warm-up done. This time I decided to do a 0.8 mile warm-up that took me along the unlit path to try and get used to that so I wouldn't slow down too much for this like I had before.

Once I'd got my number, I stood around in the dark waiting. This time I knew where the race start was, so had no issues there. It seemed like there were fewer runners about this time. I knew Bill who'd been there last time was missing this one, and I guess some people hadn't entered the full series.

I probably started too quick again, as early on the only runners between me and the leader were a few of the younger ones which were doing 2.5K. Around 0.2 miles, it was the gradual incline up to the turn where it gets dark and I was overtaken by one runner. My pace had dipped briefly; but up until I reached the turn for the dark path I'd been averaging sub-6:00/mi. This was feeling much more like my normal 5K pace; but as soon as the path got dark I knew I'd slowed down. Looking back at Strava now I can see I really had: I'd slowed by almost a minute per mile for that.

At the end of the path the light returned, and I sped up once more. Just I didn't speed up to my previous pace, and with it not quite light enough to see my watch I hadn't realised this. As I approached the path that had been flooded on the first race, I looked behind me and could see I was holding third place okay. The next runner was quite some distance away and the runner in second place wasn't too far ahead. The race leader was now nowhere to be seen - he was like a lightning bolt around this course. So, I held a steady pace as the race left the park again briefly due to a small diversion. This was a mile done, and although I didn't know it at the time, I was a little slower than I'd have liked and would only get slower.

The course re-enters the park at the next path and then resumes the usual route. As I started the second lap I could hear another runner behind was gaining on me. For a few seconds I thought whether I should speed up or not; but decided I couldn't be bothered. Maybe once I was over took I'd be more inclined to. I slowed again for the dark path, and just as I left it I was overtaken. It was around 0.9 miles to the finish, so I'd got time to pull back.

I carried on at what I thought was a steady pace, and noticed that the runner who'd overtaken me had now caught up with the runner in second place. After leaving the park and coming back in I considered speeding up to catch-up with them; but wasn't sure whether or not if I did whether I could then hold it for what by that point was just half a mile. One thing I did know though was that if I did it was likely my half marathon at the weekend would be even worse than it was already likely to be. Another thought crossed my mind that if I sped up, so would they and the extra effort would be for nothing. I held off, and decided to settle with 4th place. After all, my hope had been to do better than 6th and I'd done that. By holding back just a little I'd at least given myself more room for improvement. 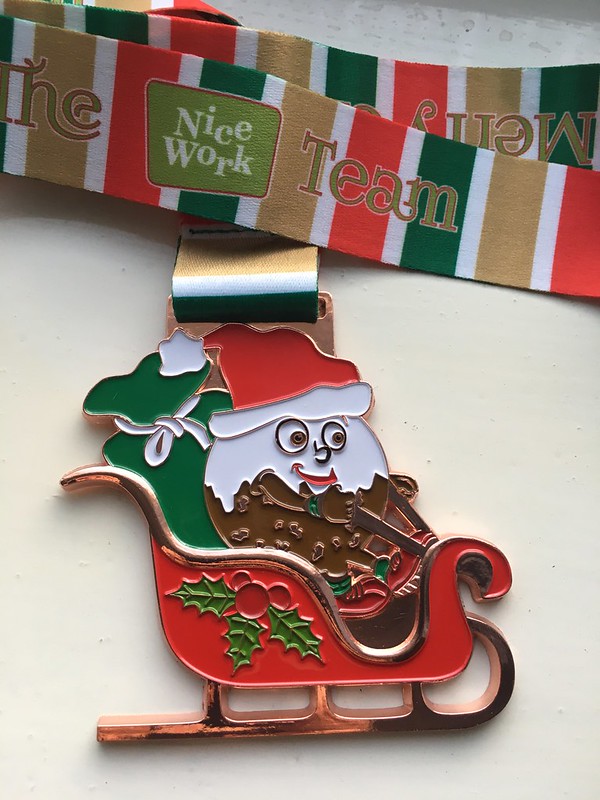 I finished in 4th place with a time of 19:11 out of just 47 finishers. I was exactly the same speed as last time, despite having done some fast 10Ks in the intervening weeks. The only difference between this time and last was that it was far windier this time. My goal for next time will need to be to get as close to 18:00 as I can manage.