I do like running 5Ks; but I don't do it that often. In fact, the last time I raced that distance was all the way back at the start of May when I did the Rocket 5K. I'd managed a reasonable sub-18 time with enough 'gas left in the tank' to feel I could do that at parkrun as soon as I got chance to. Though, my focus moved on to preparing for Amsterdam Marathon and that focus was fairly single-minded. I didn't keep up my short tempo runs (I'd moved onto slightly slower, and longer speedwork), and definitely didn't make time to do a parkrun. It's pretty rare I run anything less than 5 miles in training these days anyway; but it meant whilst I'd been working on endurance I was losing speed.

After the marathon I knew I wasn't ready for a 5K; but I entered the Winter 5K series - a four race series in Leicester's Victoria Park to try and force me into working on getting faster again. I wasn't sure how much I'd slowed by and over the two weeks since the marathon I'd been focussing on recovery so hadn't tested myself either. With this in mind I set no goals at all other than to get it done.

As the race was a weekday one, it meant it'd be after work. Unfortunately it was late enough in the day to mean I'd need to think about whether or not to eat before the race. I chose not to, knowing I'd be hungry whilst racing; but maybe that'd motivate me to go quicker.

I parked on the perimeter of the park, and did a short half mile warm up run to the war memorial where they were handing out the race numbers. This would also be the finish line later - so a nice visual marker to know how far would be left since the memorial is lit up like a Christmas tree. They indicated the facilities and start were further along the path, somewhere near the Charles Wilson building. They didn't know that was its name; but having spent three years there I got to know it pretty well. It's changed a lot since my time there too - cleaner and brighter.

Anyway, on my way there I came across Robin: a colleague who'd be running too, and his wife who would be spectating in the cold. Neither of us knew where the start actually was, and from speaking to others we followed them to where we thought it was. In doing so I found myself back where my car was parked; but still no sign of the start even though I'd now done a complete lap of the park. I headed back in the direction of the Charles Wilson building and spotted Bill who I knew had done this race before. He figured he knew roughly where the start would be as it seemed to be the reverse of the course he'd done before.

The race was starting a little late due to car parking issues apparently, and I'd found a place to stand with two or three rows of people in front of me. Not too close to the front seemed about right as I'd already got a feeling this would be slow. The front row were school children.

I started quick to try and find some space, and even doing sub-5:00/mi pace the school children were keeping up with me. I was surprised at just how quick they could move - if they could do that now, what would they be like in 10-20 years?! Having much shorter legs meant they were working much harder to cover that distance and they tired before reaching the end of the straight that led to the outside of the park. I'd found my space, and eased off the speed to what would hopefully be more comfortable. Though maybe comfortable in a 5K isn't really right, I didn't want to overdo it on my first 5K in ages either.

I realised this first but outside the park was a very slight incline, and had to keep an eye out for oncoming cyclists too - one was ringing his bell as he passed runners to make sure they knew he was there. He seemed a little miffed that all these runners had suddenly appeared in front of him. Maybe this was why the race start was after 19:30 - to reduce the amount of traffic about.

When it was time to re-enter Victoria Park, this was the 400m stretch that we'd been told in the race briefing wasn't lit. Before the race the communications said that a headtorch isn't necessary; but some might like to use one anyway. I soon found that perhaps it wasn't so much a nice-to-have; but a necessity. It wasn't long before I could see the feint outline of some people; but couldn't be totally certain as there was the blinding light of an oncoming cyclist. I couldn't really see anything other than that light and it got worse the closer I got. I eventually had to run off to the side to make sure I wasn't going to hit the cyclist, or the pedestrians I thought were there. However what the light had prevented me from seeing was a tree which I almost ran into - I was lucky I saw it at the last minute. Stopped. Then ran back onto the path and started to build up the speed again. I could see the race leader was quite some distance from those behind him, and possibly even gaining more distance between them.

At the end of the dark stretch a marshal directed us around to the left, and I knew that we after the next left we'd be reaching the path that was flooded. I'd seen that on my way to the Race HQ earlier. I have to say that although the organisation at the start is a little disorganised, they do well with their marshals to ensure we're on track. As I got closer to the flood I noticed the two runners immediately in front of me ran around it instead of through, so I took the opportunity to overtake the first of them.

The water seeping into my shoes was unpleasant; but cold water splashing up the backs of my legs were not. As I passed under a street light I used the opportunity to check my pace again as I'd not for sometime - I was going a lot slower than I'd thought. I did however pass another runner as the course turned around another bend and towards a mildly wet section. There were more non-race traffic along this bit; but they didn't seem bothered by us. Another turn came close to where we'd already run, and where runners were still passing; but the turn after this headed towards the war memorial and the path that runs along the edge of the University.

This section felt a lot easier and I let my pace increase for a while until I passed the start of the second lap. I slowed again as I reached the outside of the park at the end of this long stretch, and was overtaken by a runner I'd heard approaching some time ago. This time the outside section felt much harder even though I wasn't going as fast as I normally would. I couldn't believe how slow my second mile had been. It was slower than my Half Marathon PB pace.

This time when reaching the dark section of the lap, I ran it a lot slower than before and was fortunate to not encounter any issues this time around. I was staying close to the runner that had overtaken me, and after going through the flooded section I felt that as long as stuck with him I could sprint at the finish. This was a big assumption though: the race had taken more out of me than I'd have liked.

It seemed he was tiring though as I overtook before I'd planned to try to, and then started to pick up pace as I got closer to the war memorial. It was a little dark; but I could see the timing mat, so stopped my watch as I crossed it.

I was handed a medal, which I put over my head as I walked over to the table to grab a bourbon biscuit and a cup of water. Robin finished shortly after, and then Bill just after that. I'd finished with an official time of 19:10 in position 6 of 112 runners overall, and 2nd place in my age category. 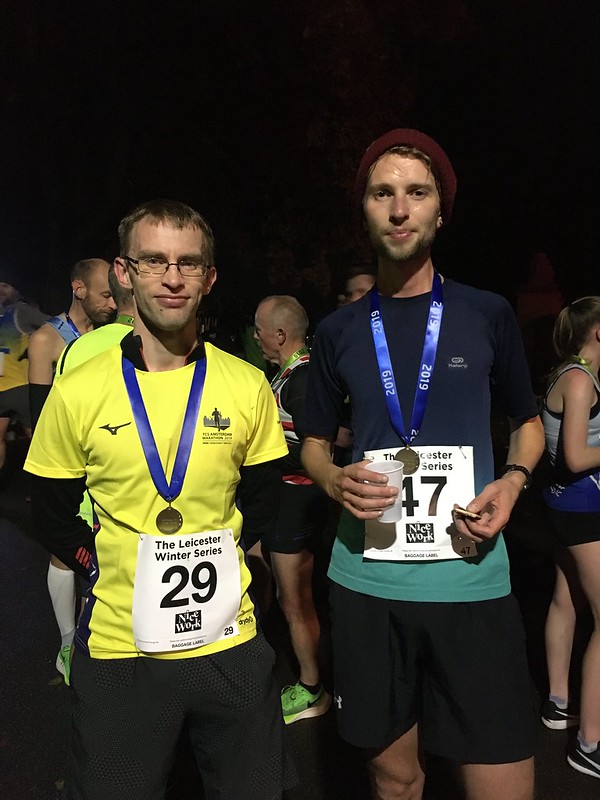 Not too bad position-wise I guess; but time was it was awful - I'd not run a 5K that slowly in a long time, and knew that even two years ago I could have run a minute faster than that. It gave me a goal to achieve by the end of this race series though: to get a an 18:00 or better time by the end of race 4, and maybe, just maybe try to get a 2nd or 3rd place finish. It'd be tough, and of course be very dependent upon the field for each race; but I've never gone into a race hoping for a good position before, only for a specific time. This time though, it didn't seem too unreasonable, and might just be the motivation I need to work harder.