After race 2 of the series I set myself the goal of getting as close to 18:00 again as I could manage. Over the last 8 months I've slowed down quite a bit, so it'd be nice to try and get back to where I was. One thing I've not been sure about though is whether running in the dark in the evening is slower for me - I know when I've run in the dark early morning it's been slower than it is during daylight later on.

Since the last race, the main thing for many people has been Christmas, and the indulgences that come with it. Between my last race of 2019 and Christmas Day I was doing my usual runstreak. Even though I didn't get in as many miles as I would have liked, I had my biggest week during this time with 72 miles run. After Christmas my first few training runs were tough; but by New Years Day I was starting to feel ready to continue with training. So now I'm back into the pattern of doing my long run on Sunday, and then running for the next 5 days before having Saturday as a rest day. What this means is that whereas in all of my races last year I was having a rest day the day before a race (even if that day was actually still a lot of time spent on feet such as in Amsterdam) I would be running this race would be my fifth run of an intended 6 day streak.

You'd have thought after all these races I'd have learnt my lesson; but after an extended day at work the night before I had a large curry. It's probably not the best of running fuel, and during the day of the race it wasn't sitting well. I had a strong feeling if I made it to this race it wasn't going to go well at all.

However, I went ahead and headed over to Victoria Park for race 3, and did my usual 1 mile warm-up route (though this time I lost about 0.1 miles whilst waiting for my watch to get a signal through the trees) to collect the race number. It felt a little warmer than the previous race, so it wasn't all that bad waiting at the start, though was cool enough to agree to another quick warm-up jog with a colleague just before the race started.

As is usual, the juniors doing 2.5K were off like a shot from the start and were ahead of most of us seniors for most of the first straight at least. It wasn't until the second turn that I'd passed the last of them and had settled into what I was thinking was 4th place. I could see the guy in third in the darkness of the avenue of trees ahead and I thought he was gaining ground too. Up until this point I'd been doing around 5:38/mi; but as is usual I slowed by around a full minute per mile for this dark section. I want to avoid doing it with a headtorch if I can help it; but I'm not sure how to stop myself slowing down for this straight.

This first lap felt comfortable, and once again the route would leave the park in a slightly different place due to construction work. On the first lap this bit was clear of other runners, and I just kept to a consistent distance behind runner #3. This first mile was overall a little slower than I'd have liked by about 30 seconds. A big difference for this distance.

I looked ahead at 1.2 miles and thought to myself that if I'm this far behind runner #3 at this point of the next lap I wouldn't stand a chance of overtaking. This spurred me on briefly and for the remainder of this first lap I was doing short bursts of increased pace to close the distance. By the time I reached the end of the 2nd mile I'd caught up with the runner and was able to overtake just before reaching the dark straight. It was however the slowest mile of the race for me.

From now until the end of the race I'd look behind me several times to see how much time I'd got. I needed to keep moving if I was to stay ahead. After the dark straight I found a few obstacles to get passed in the form of other park users who were taking up the entire width of the path - some lugging suitcases behind them. I managed to not lose too much time fortunately. On this lap, just as on the previous one - when I reached the large puddle I was able to time my strides so that my foot would strike either side, and on the shallowest part in the middle. I actually kept my feet dry!

This time when leaving the park I had to avoid oncoming runners that had just begun their second lap; fortunately ths section is quite short and I was back in the clear just seconds later. As the finish neared I kept pushing, not wanting to lose what I was thinking was third place even though I didn't bother with a sprint finish.

I looked around and could only see two other seniors, so I was hopeful I'd actually managed to do it. Whilst eating a mince pie and having some water I cheered in other runners, and was soon able to confirm how I'd done. 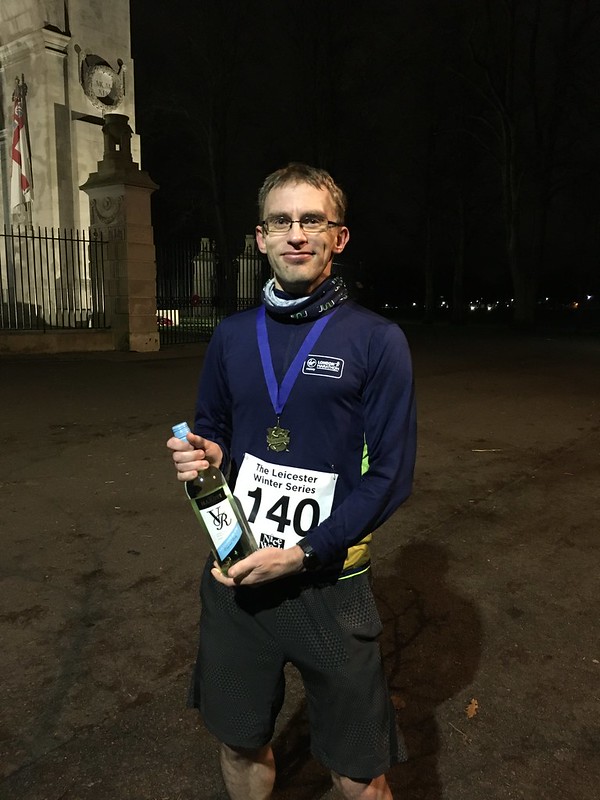 I finished in 3rd place with a time of 19:11 out of just 59 finishers - a few more than last month! I was also first in my category. I had to hang around after the race for longer than I normally would have; but I actually won a bottle of wine (which I've given to my Dad). It's been a while since I've had a top three finish, so maybe this was a slow result - but I'm happy with my position!

I was exactly the same speed as the previous two races. Am I doomed to be this speed in 5Ks forever now? I still hope I can get back to where I was soon, with just one race of the series left to go and now being knee deep in marathon training…