There is so much to see on the island of Cyprus. In some ways it felt like I’d got too much time, and yet at the same time, knew I’d got so little time to fit in everything I could see at a comfortable pace. From sunrise just after 06:30 until the sunsets around 16:30, it gave me around ten hours every day to see as much as I could. Each day I’d wasted the first couple of hours of daylight by running after sunrise rather than before. Yesterday I’d wasted the last couple of hours of daylight by just sitting in the room, and doing nothing. Today wasn’t going to be much better, but attempting to fit any more into the day would be difficult.

The apartment check-out time was 11:00, and they’d so far ignored my emails before the trip asking about holding onto my luggage for me for a couple of hours, and even when I checked-in they wouldn’t give me an answer. It meant that I couldn’t risk making any plans for the morning in case I had to take my luggage with me. In Paphos it’s not like many European cities where you can stow your luggage in lockers somewhere, such as at a bus or train station - they just don’t have the facilities here. So, Agios Neofytos was definitely out of the question.

After sunrise, whilst the cockerels crowed, I ran west, finding that the road eventually curved down to the coast where there were resort hotels. This was a steep road down to the coast, and hard work running back up it. Once back at the apartment I needed to prepare for the day ahead - getting to Limassol. I’d got more time than I needed though, and I was aware that not being able to check-in at the other end until 14:00 would mean I’d be stuck with my luggage until then. I used this time to research Nicosia, to try and decide if it was worth taking a bus there in a couple of days' time. If I wanted to, it’d take around two hours by intercity bus to get there. Unfortunately there was very little on this side of the border that I wanted to see, and much of it would be closed due to the pandemic. It seemed like this would be somewhere for another day, when it’s easier to cross the border. 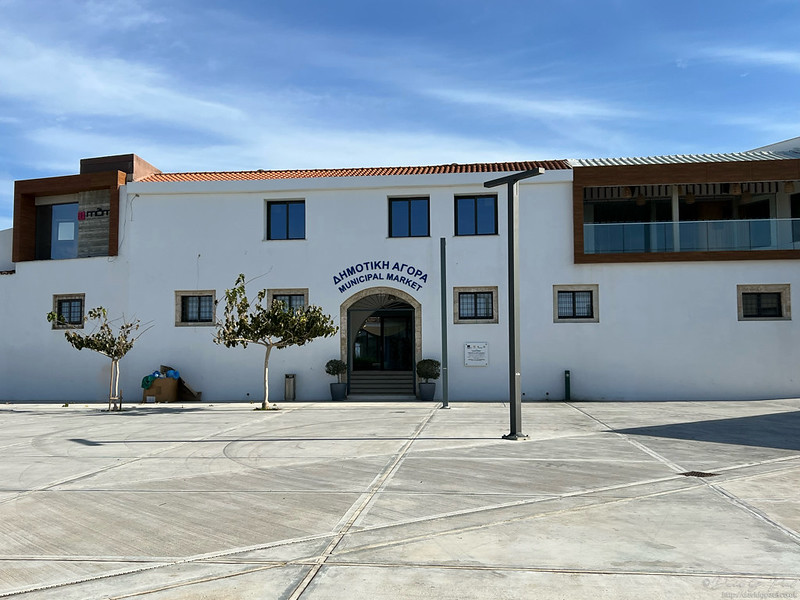 At 10:00 I checked out, and walked to the Municipal Market bus station. The wheel on my suitcase hadn’t liked the bad paving stones in Germany, and now in Paphos they were liking this even less and developed a squeak. This went on for most of the thirty minutes it took to get there, which meant an hour to wait for the bus. This was fortunately easy to catch, and for the next 75 minutes I watched as the world passed by out the window. For only €4 this was a bargain! 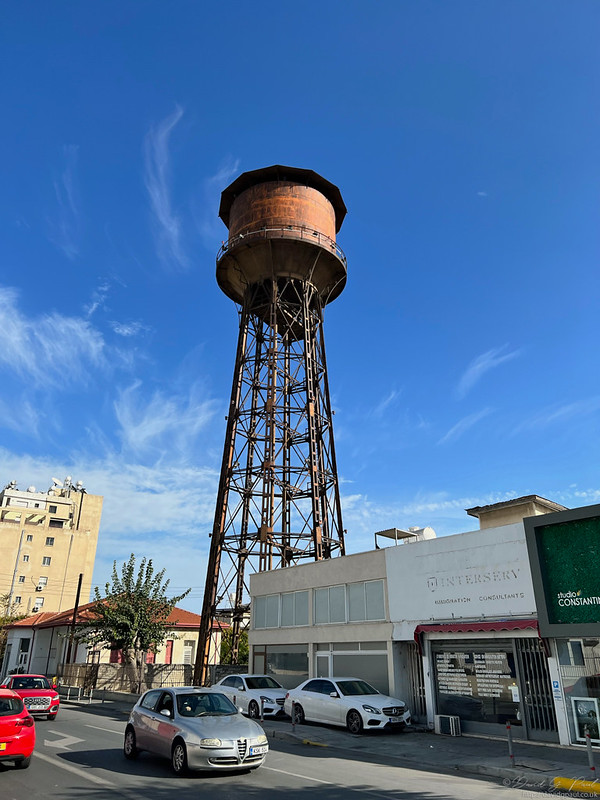 In Limassol the traffic was heavier than Paphos. In fact, everything was so different - it felt more like other modern cities for the most part. I hopped off the bus at the Old Hospital, and walked the rest of the way to the Alinea Suites. Even though I was an hour early, it was okay to check-in, and I found my room was on the top floor near the swimming pool. This was more like a hotel than an apartment, but it is in the middle of a large city. This was a lot cleaner than the last place, and there were more pots and utensils than the other place - but only a kitchen hob, no oven! This was going to mean that I’d need to eat at restaurants, or have food delivered to the room using a local delivery app called Wolt. It’s just like using JustEat back home. 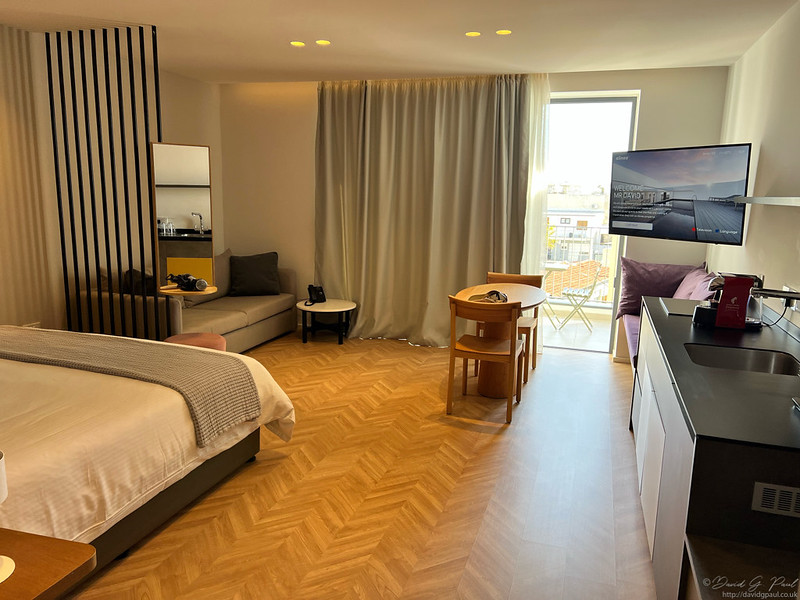 I sat in the room for lunch, and then headed out to see what Limassol Castle was like. It was a short walk to get there, and it only took around twenty minutes for me to see it all. The entrance is up some stairs inside the courtyard, and as usual, you need SafePass and a mask to enter. This cost €4.50, which compared to some of the places in Paphos, seemed a bit much for what was there. It was a surprise that I had to change my camera battery at the start of looking around here. It meant I’d used one battery in two days, and this was my only other battery - to last four. I realised I’d need to be stricter about turning my camera off after taking shots, though I also wondered if the battery I’d been using first was a lower capacity one. 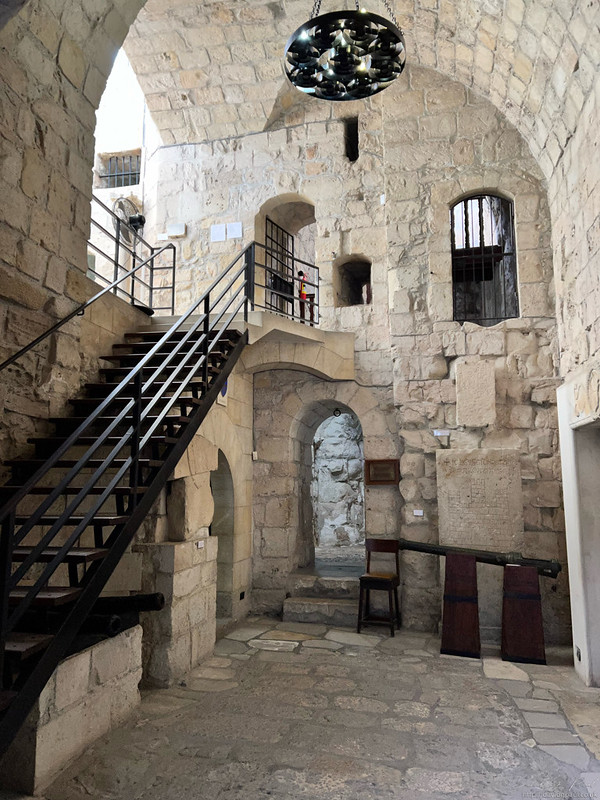 Inside the castle there is a wooden staircase leading up, a corridor to the right, a small room straight ahead, and stairs leading down to the right. I started off by going down, and this room had a high vaulted ceiling, and various stone work and pottery on display. There’s another room off this which is like three long corridors, and these are lined with large pieces of stone with artwork etched into each of them. At the end of this there are stairs back-up into the corridor off the main entrance way. This has many small rooms off it, each with more stone slabs. Upstairs is another similar corridor with the same small rooms off that, and this time they are filled with a variety of things. One for example has helmets and firearms. 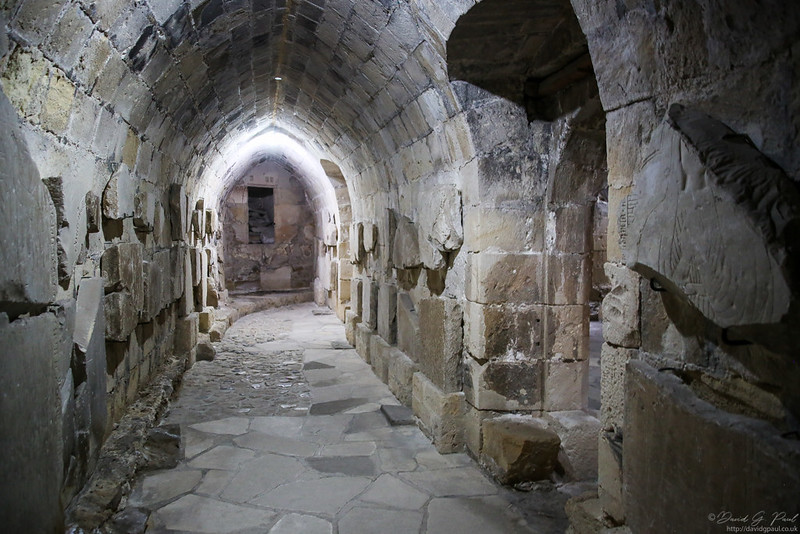 There's also a second set of stairs leading up onto the roof, and you can walk around the entirety of the wall. This brought my tour of the castle to a conclusion so I headed back down and outside to the various pieces of stone scattered around the grounds. The main one is an olive press with large stone holes for the olive oil to run into. 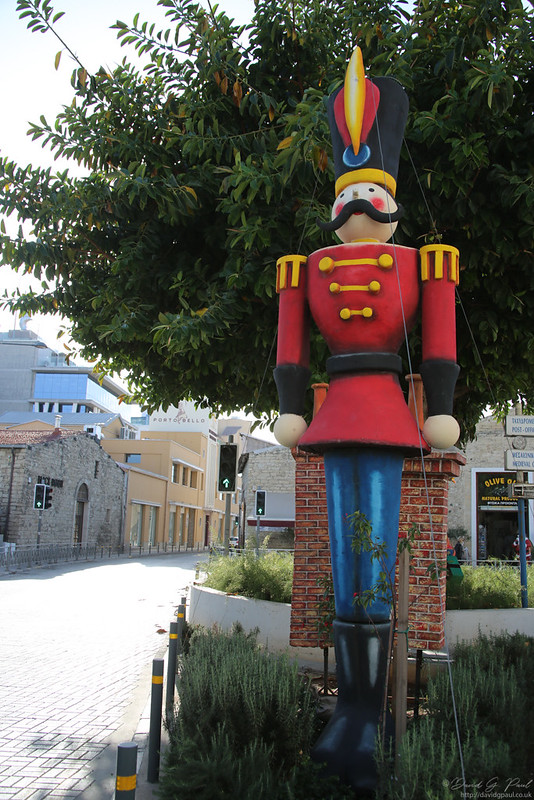 Around this area are quite a few restaurants, and I found that by heading towards the coast there were even more. There were large Christmas decorations up as well, such as a soldier from the nutcracker, and more Christmas trees. This entire area was busy due to a Christmas fayre, and very few people were wearing masks. I kept my distance as much as possible, and wore mine for passing them. At the Old Port I walked out onto Pier One, and then walked along the Molos Seaside park - photographing whatever I could find along the way. 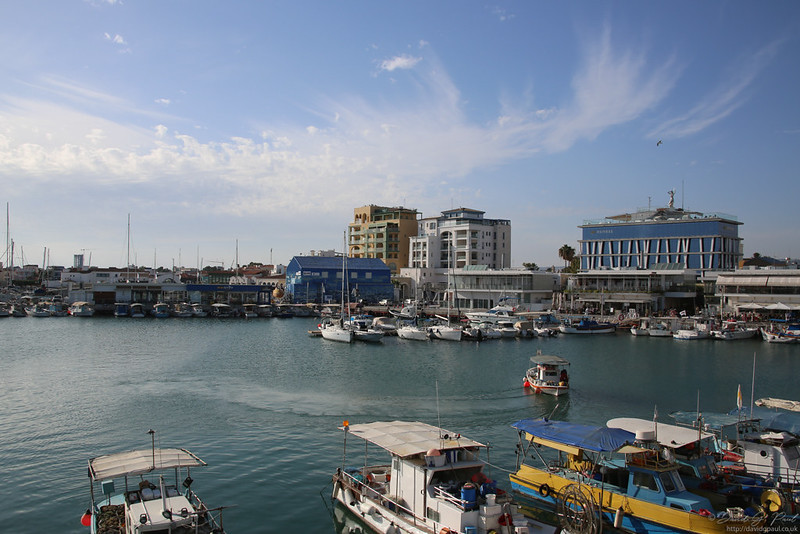 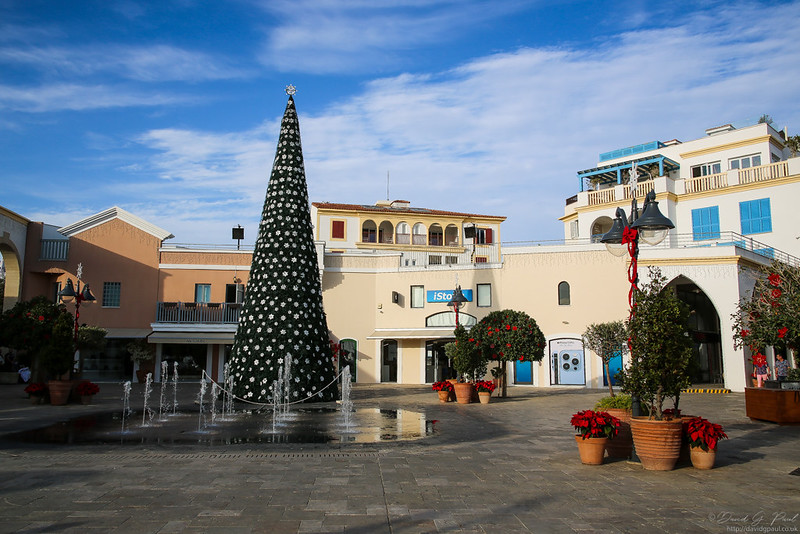 I’d almost walked the entire length of the park when I turned back in the direction I’d come from. This time I stopped by a NextBike station to see how easy the bike rental would be tomorrow. It looked easy enough, so I sat down for a while to waste some time as I felt I may as well stay out until it was time for food. I then headed back to the Old Port, and kept on walking until I reached the Port Authority, and had to go inland a little before I could return to the promenade along the coast. This path eventually led to a residential area called The Island Villas, and beyond that the road was blocked due to roadworks. 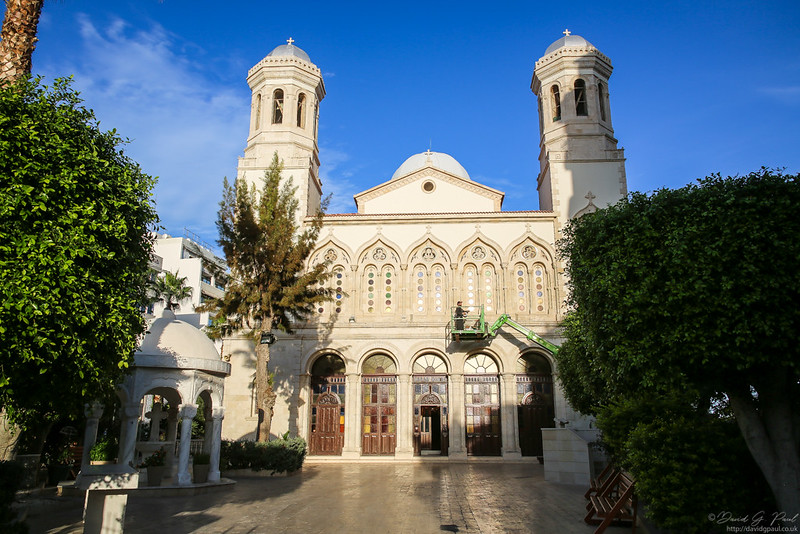 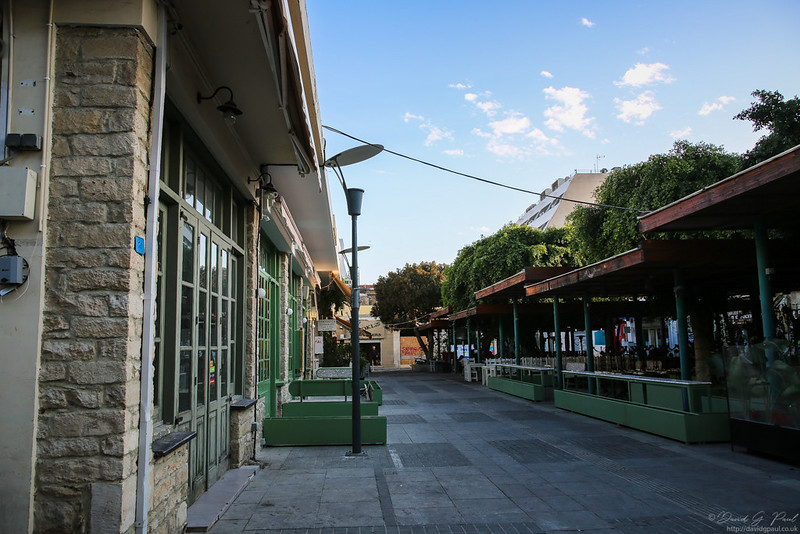 When I turned back I passed TGI Fridays and thought maybe that’d be a good place to get food from later. I’d still got over an hour until sunset, and at least two hours until I’d want any food. I decided that perhaps it was a good time to do some food shopping to cover breakfast and lunch for the remainder of the trip. So, I walked from the Old Port to the Grand Mosque, and from there to the Ayia Napa Cathedral, managing to include Athinon Street along the way. This’d ticked off a few places I’d wanted to photograph, and they just happened to be on the way to the supermarket - which was just past the hotel.

I managed to get everything I needed, and got back to the hotel for 16:30 in time to see the sunset. I looked at Wolt, but decided that today I’d rather head out and find somewhere to eat, somewhere quiet. On my way there I passed a Christmas market of some kind, in the courtyard of a Catholic church.

Eventually I found myself back at the Limassol Castle, and looked at menus of the restaurants there. I looked at one for Meat Bar, and decided that a chicken burger and fries sounded good today. When I sat down I realised it was a lot earlier than I realised, and had got my food by 17:05. The burger was very big, but it was also very hard to keep it in the bun as between the cheese and the barbecue sauce it kept sliding out. With a soft drink and a 20% tip this was just over €13, which seemed like a very good price. 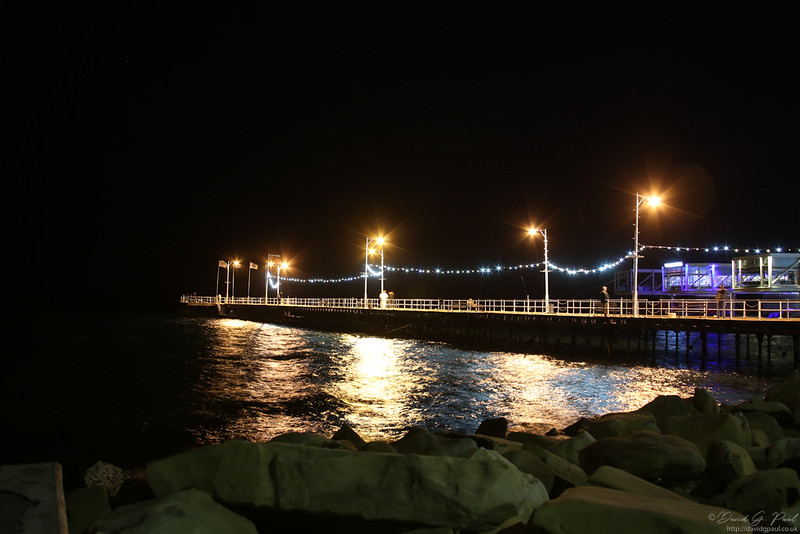 I was back outside and wandering around the Old Port area by 17:25. The Christmas trees and lights were all lit up now, and what had been a busy fayre to start with, was now even busier with more activities going on. When I decided I’d had enough and headed back to the hotel, I passed the Catholic church again, and by now they were singing Christmas songs and carols, so I decided to stand and listen to the live music for a while. It was very strange to be standing outside on a warm evening, wearing shorts and t-shirt, and everything being about Christmas.

I’d certainly done more on my first day in Limassol than I’d planned - it was good to have time to explore the unexpected. Other unexpected things were in the news however - the Omicron variant of COVID-19 had already surfaced in England, and all UK arrivals would need to self-isolate until taking a negative ‘Day 2 PCR test’. Whilst this is how it should have been all along really, it meant that the LFT I’d ordered would no longer be used and would be a waste of money. It also meant that in order for my run streak to continue during self-isolation I’d now be running laps of the green. I hate to think how many laps it would take just to cover a mile.

Instead of worrying about it, I looked at maps, and bus timetables to decide on my plans for the next few days. Whatever the news back home, it wasn’t going to ruin this trip.