I’d had my doubts whether or not this day would come. Over the last few weeks we’ve seen a number of countries no longer allowing people from the UK to visit due to the rate at which our COVID-19 cases are rising. That alone would be reason enough for the Republic of Cyprus to follow suit, and for easyjet to then need to cancel flights. In the last few days we’ve also seen countries such as Austria and the Netherlands enter another lockdown as their case numbers have risen. There were already issues visiting the Turkish North Cyprus due to the pandemic, and I’d no longer be able to cross that border. It meant that every day I kept one eye on the Foreign Office’s travel advice.

After work the night before, I drove to Luton Airport for the start of my trip to Cyprus. The drive wasn't too bad after rush hour, and I’d listened to podcasts on the way as mile after mile of darkness had passed by. I’d made the decision to travel down the night before due to how early the baggage drop would open, and how much earlier that would mean having to travel down. This way, I’d had the chance for a little more sleep.

Cost-wise, the best thing to do was to also leave my car in the long stay car park from this point, and to walk from the hotel to the airport in the morning. It’d save paying for parking twice, and it made little or no difference to the cost of the airport parking by dropping it off early. If I’d parked at the hotel it would have been another £11 overnight.

With the bag drop closing at 06:20, I got up at 04:30, and got ready to walk to the airport before breakfast. My expectation was that I’d find somewhere open to get breakfast once I’d dropped off my bag, and was through security. From having been out for runs at this time the last few days, I knew it was going to be cold and dark but it wasn’t as bad as I expected and maybe it helped wake me up more after not having slept well in the last couple of hours.

My boarding pass would have allowed me to use the faster lane at the bag drop, but I wasn’t quite ready so opted for the slower lane. This didn’t take long either, and whilst queuing they checked my Cyprus Flight Pass and added a sticker to my passport. This got me to the self-service bag drop where you print your own baggage label, and then it’s a Mongolian horde approach to dropping it off.

Security was quick too even without using the Fast Track lane. For once I didn’t need to fully empty my bag for an inspection of it. This gave me plenty of time to find somewhere to eat. There are a few options at Luton airport for either hot or cold food. I’d decided that as I didn’t know what I’d be eating this evening, I’d try and get something warm for breakfast - an English breakfast like I often used to at airports. I had a cooked breakfast at The Smithfield along with a cup of Earl Grey tea, but even as I was ordering it I felt maybe I should have gotten something a little healthier. There wasn’t that much to it though once I ignored the bits I didn’t like.

Once I’d done, I’d still got another ten minutes until they announced the gate, and it’s a reasonable walk from where the shops are to gate 3, but there I was almost at the front of the priority boarding. At this airport I couldn’t find anywhere to fill my water bottle so bought a small one from a vending machine at the gate for £2.00. They then checked my passport twice more, and my boarding pass before being led outside to wait for around twenty minutes before boarding. Fortunately it wasn’t as cold as it could have been! 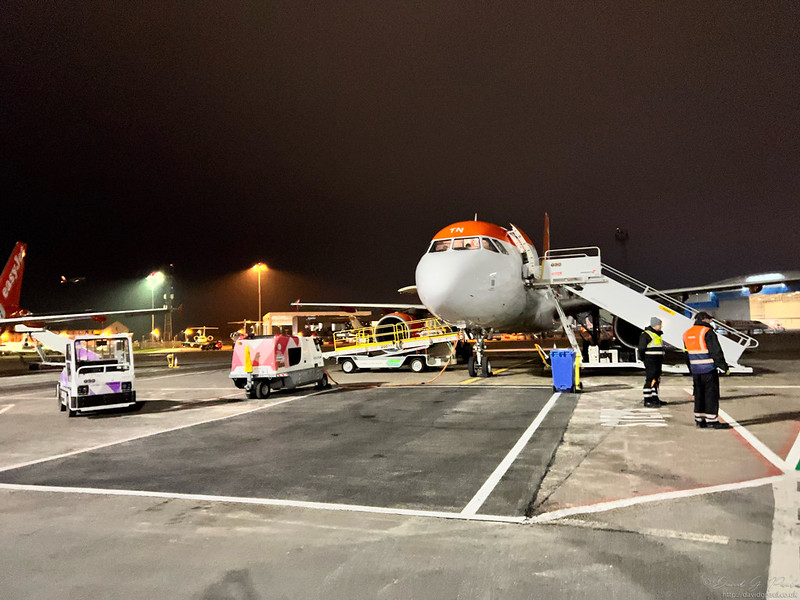 The aircraft left the gate on time at 07:00, and before I knew it, we were in the air on the way to Paphos. The row I was sitting on was empty so I was able to put my feet up and relax once on the way. It takes 4.5 hours to get from Luton to Paphos, and during that time I watched some TV, and read with my feet up across the row.

Just before we landed they announced that someone had been smoking in the toilets and as this is a criminal offence they would need to call the local police on landing. They asked if whoever did this could “do the decent thing and make yourself known to the cabin crew”. As there were no delays, I can only assume that someone did admit to this, but whether they were detained I don’t know. I was one of the first off the plane, and my luggage one of the first on the carousel after having gone through a very speedy immigration as well. Between the wheels touching down and walking out the front door only twenty minutes had passed! 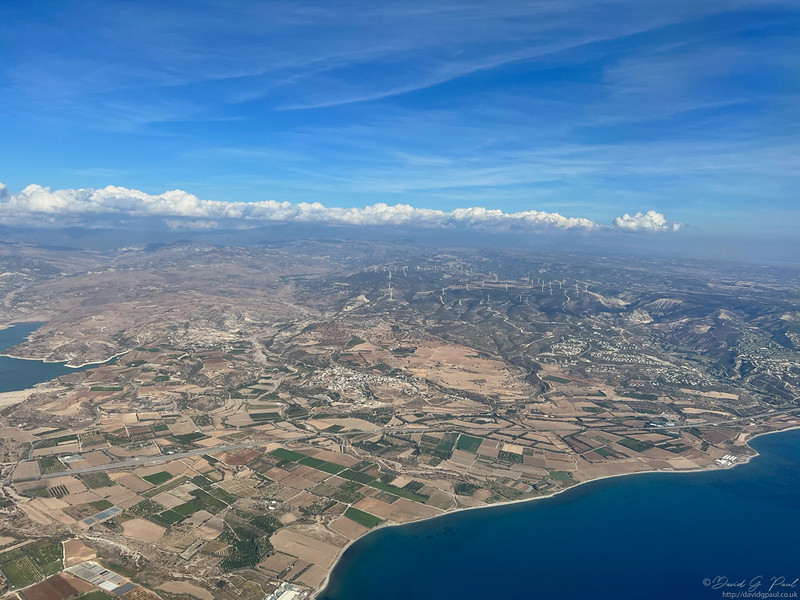 As I was so quick it meant that my pre-arranged taxi hadn’t yet arrived, and I would have quite a wait. Fortunately, moments after I’d landed I’d received a WhatsApp message from the driver, so I replied to that and found that they would be arriving at 14:15. It was warm out, so much warmer than back home, so I tried to stay out of the midday sun the best I could for now.

After 25 minutes had passed the driver arrived, and took me to Chorlakas, a suburb of Paphos where Adamou Gardens is located. I could tell I was far from everything, something the driver pointed out. I was after some peace and quiet in the evenings though, and I don’t mind long walks to see the sights, so this would be perfect. Along the way she’d also said how things had changed on the island since they’d entered the EU. This had brought busses to the island that took some of the taxi trade away due to very cheap rates to anywhere on the island.

She also told me that the COVID-19 restrictions in Cyprus were changing on 29th November - which would be part way through my trip. Whilst she couldn’t tell me the specifics of it, I did look it up online and found that none of them would affect me, but it did indicate I’d need my vaccination booster before I return in March.

Once I was checked in I found I’d got a balcony with a great view of the pool, and the kitchen seemed sufficient for my needs for the next few days. The only downside was a lack of cooking utensils - not even an oven glove. I’d just have to make do with what was there, but for now I just needed to get out and get my run for the day done to make it 567 days in a row. 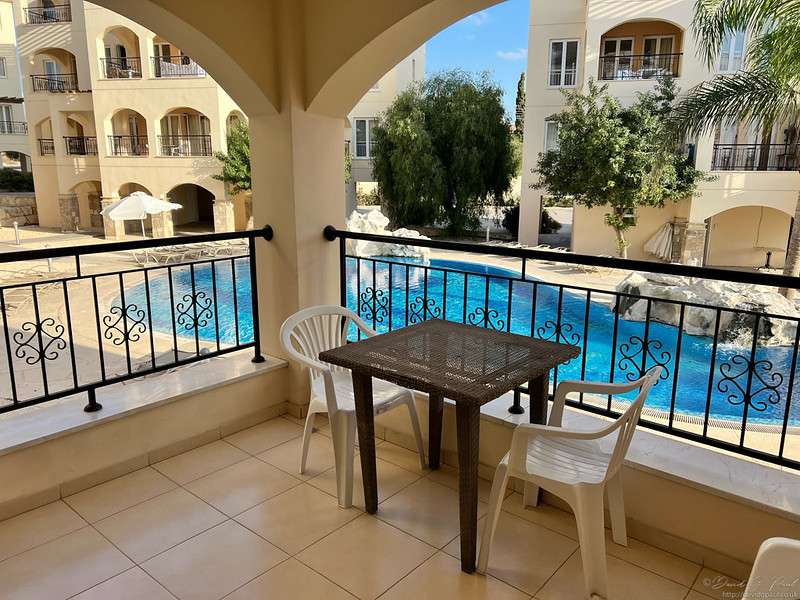 To start with I headed straight towards the coast but soon found I couldn’t get any closer as this was on a cliff. Instead I turned back and found the main road and followed that. After a while I started to take turns at random, thinking that eventually I may get closer to the sea, but whilst I could see it, I never quite got there. The closest I got was at the bottom of the hill at the Tomb of the Kings - just I didn’t realise that’s where I was. It’s a sight I’ll see another day. The pavements were a bit haphazard in places, and I often found myself running down some quieter roads. It seemed a lot of construction work was going on around this area too.

Getting back to the apartment was harder work with most of it uphill, and needing to find which roads would get me there. Whilst I knew the direction I needed to go in, not all the roads heading that way helped and I had to double back a few times.

When I got back to the apartment I’d done five miles, and after a shower I was back out, looking for a supermarket. The one I found required you to show your vaccination status on entering, and fortunately accepted the NHS proof. I bought enough food from there to cover breakfast and lunch for at least the next few days, and also a couple of evening meals with dessert. At €29 this was already a saving on food as I could easily have spent that on eating out in a day. I’d misjudged how much I needed though and had to buy a large bag to help carry it back almost two kilometres in the dark.

I’d bought a pizza to cook tonight, knowing there were only pans for the electric hob, and nothing to put in the oven itself. I figured this wouldn’t matter too much with pizza, but it did take a while to figure out how to get the oven working - what eventually got it going was setting the time! At the supermarket I’d seen signs that were doubled up with English, and there were a number of English brands around as well such as Cathedral City for some cheddar, Mr Kipling cakes, and even Iceland branded frozen food. The English influence was undeniable, and when I went to plug in the European power converter into a kitchen socket I realised that even the plug sockets here were UK ones.

With no oven glove to get my pizza, I used the scruffy-looking tie backs from the curtains to pull the shelf out far enough to then use a knife to shuffle the pizza onto a waiting plate. I eventually got to sit and eat my dinner on the balcony, looking at the lit up swimming pool below. Once I’d finished my dessert, it started to rain, and flashes lit up the sky as a thunderstorm rolled in from the sea. It was forecast to carry on all through the night, and for most of the next day. It was lucky I’d packed a waterproof coat.

The only question now was: would the loud hum of the fusebox, one I could still hear whilst wearing earphones, keep me awake during the night? I was sure the faint hint of music from somewhere wouldn’t.