On the day before a marathon I don’t like to do too much walking; but inevitably it seems to always happen. I wanted to see as much of Amsterdam as I could, and my solution for sightseeing whilst restricting how much walking I was going to do was to take a train out of the city.

As breakfast (a continental one) starts at 07:30 I decided I’d give them time to get fully set-up before going down. My plan was to be out of the hotel by 08:30 so I could go in search of a tram stop that sells day tickets. This delay in getting breakfast also gave me more chances to try and sleep; as during the night I’d heard neighbours, traffic, trams, and aircraft. It did eventually stop; but I’d struggled to sleep and felt exhausted.

On the positive side though, my back wasn’t really aching any more: there was just the faintest sign of it. In the meantime my legs had suddenly started aching: I suppose from having spent most of yesterday on my feet. I could really feel my calves pulling when walking up and down the steep stairs of the hotel. The stairs are so steep that climbing them really is a more accurate description.

The reception had told me that the nearest tram stop didn’t have a machine so I’d need to walk to the next one. So I did. Though when I got there I found the machine at that one was broken, so found myself walking all the way to the Rijksmuseum where some runners were getting ready for their morning race. So I’d already walked about a mile on a day I was already aching, and trying to cut back. 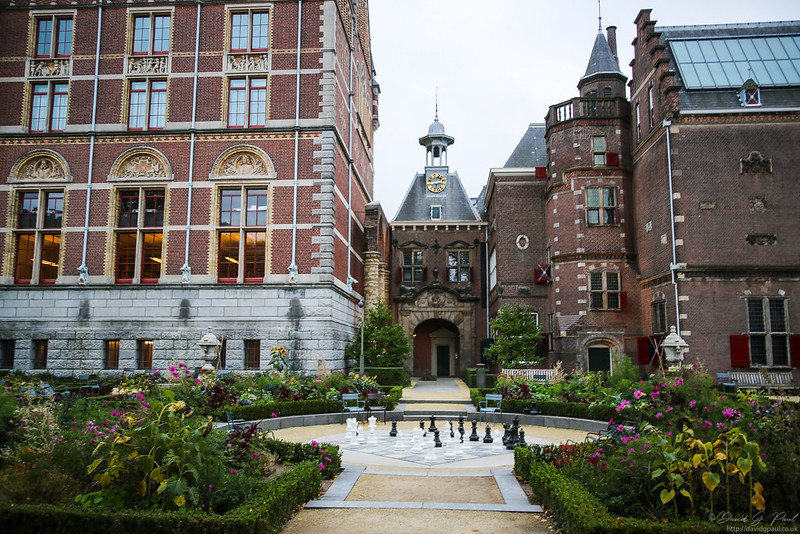 Here I was able to buy a tram ticket that would last me the day as this one cost only €2 more. It was likely I wouldn’t need it for any more than the return trip to the Centraal Station; but it gave me options: such as taking the tram to the Olympic Stadium later.

Whilst waiting for the tram I had a quick look around the Rijksmuseum gardens as they’re free to go in. When I got to the train station I followed the sign for the buses, and soon found bus 391 to Zaanse Schans. 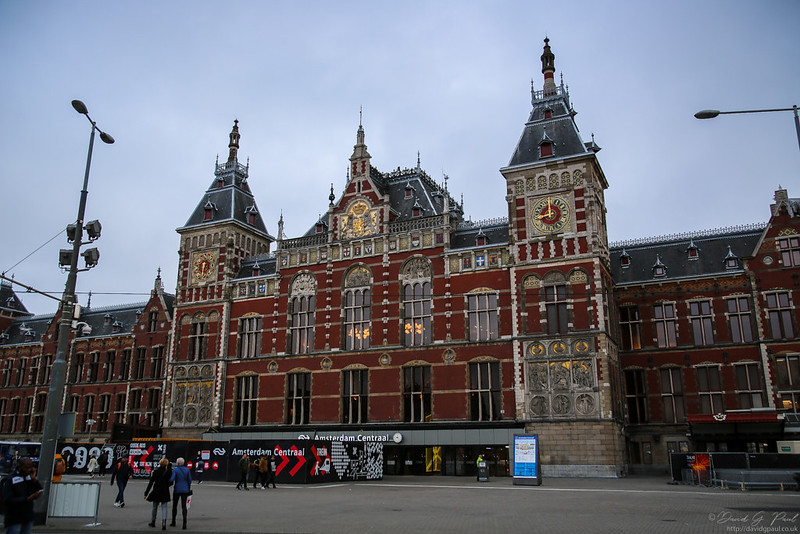 It didn’t take long to leave Amsterdam behind, and arrive in Zaandam; though it was another forty minutes until it arrived at the end of the line. Stepping off the bus, the driver told all passengers to get the bus back we’d just need to return to this same stop. Immediately in front of me was the Zaanse Museum where I needed to exchange my printout for tickets, and beyond that I could see windmills turning.

There had once been so many more windmills in North Holland - a thriving industrial area; but many had been destroyed long ago. What I could see in Zaanse Schans were actually reconstructions of buildings that had existed elsewhere in the region, or had been relocated there from where they'd originally been built.

As I’d been lucky and caught an earlier bus than intended, it meant I’d arrived before the museum was open. After exchanging my ticket I stood around initially; but decided that with the storm clouds I could see in the distance it might be best to do the museum later. I didn’t know how long the dry weather would last! 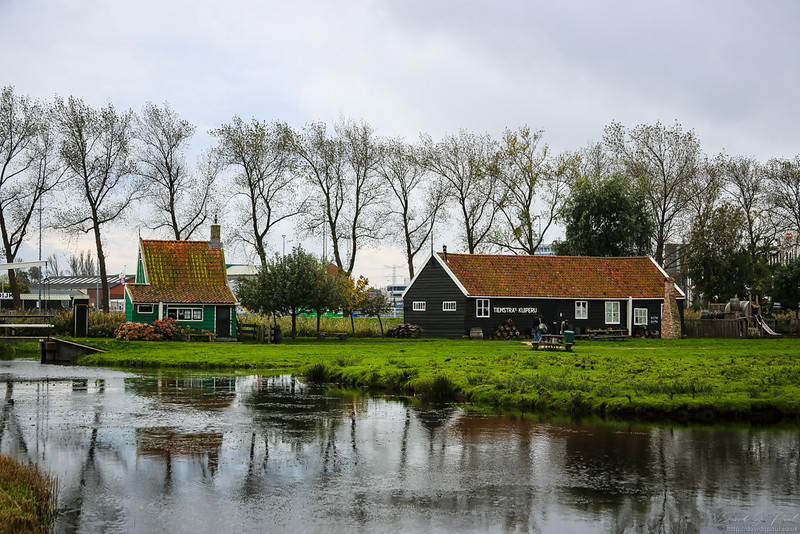 I headed into the historical village and headed straight for the windmills. I figured it was best to see them early before it got any busier. The first of these that seemed open was “De Kat Mill” - which happened to be the one I’d seen recommendations for going around. None of the windmills are included in the Zaanse Card, and each individually costs €5 to look around.

This windmill is the only working windmill in the world that produces paint. The original had been built in 1646; but in 1782 it was destroyed in a fire and had to be rebuilt. Inside I could see the massive gears turning slowly as the wind turned the sails somewhere above me. What I was looking down at was the paint being slowly created. 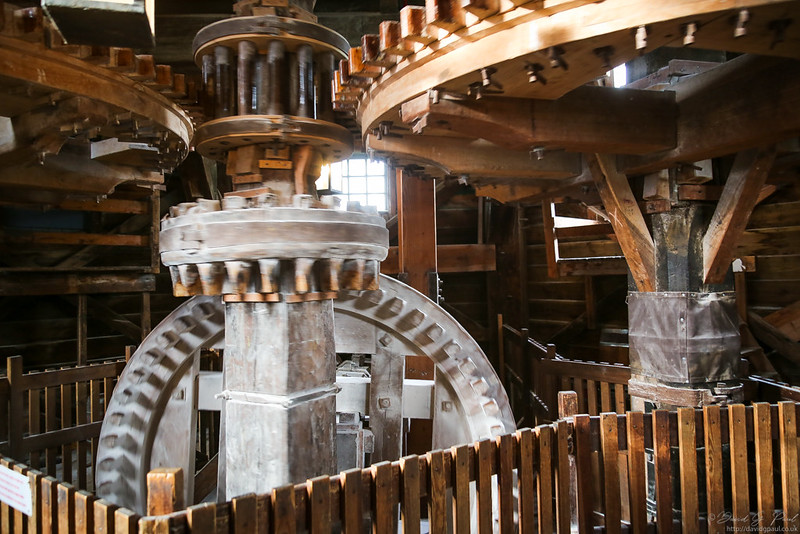 I climbed the first set of stairs, feeling my legs continue to resist my efforts, and could see more of the workings of the mill. There was another set of stairs that led outside onto a rickety platform. One way was blocked off to protect people from the turning of the sails, so I walked around in the other direction to look across at the other windmills that were working away.

Once I’d left the windmill, I continued walking passed the others until I reached another exit for the village. The clouds were now looking incredibly dark, and although I needed to rest my legs I decided I’d walk a little quicker to get back amongst the other buildings.

I’d only just passed the first couple of windmills when I felt the first few drops of rain. To start with I thought maybe I’d stay ahead of the rain; but as it started to fall faster I quickly got my coat from my backpack. At least I’d thought ahead and brought that; but I was wearing clothes that wouldn’t dry quickly, and I’d left my waterproof bag cover at the hotel. 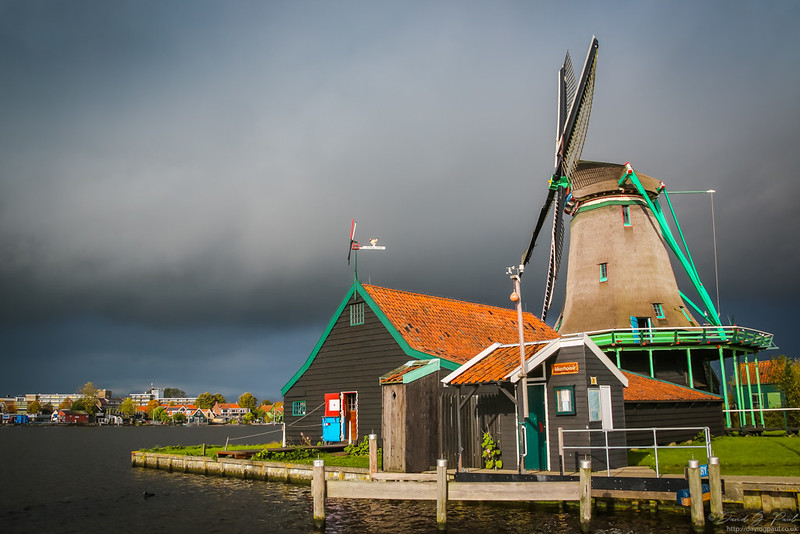 By the time I got back to the main part of the village it was now raining heavily; but I could at least duck under a tree for a while. Water was dripping from my head, and my jeans were beginning to feel like cardboard.

I thought maybe I could make it to the nearest building without getting much wetter. I kept close to the buildings, moving from one to the next until I reached the Zaan Time Museum. Inside there they had many clocks and other time pieces that hail from this region. It was, if anything, a chance to dry off and perhaps take a few photographs. 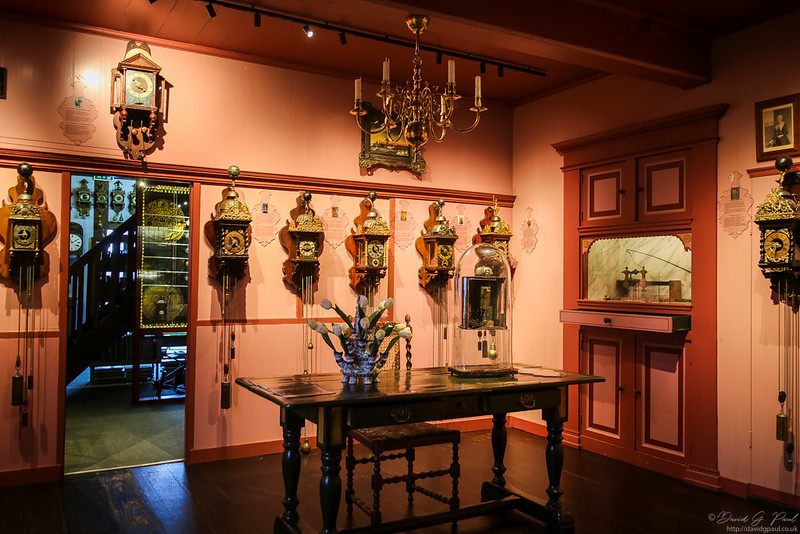 When I left this museum, the rain had stopped, so continued on my way to the next museum included on the Zaans Card: the Cooperage. This one can be seen almost entirely from the entrance, and is cluttered with the various tools required for making barrels. If it hadn’t been for the entry being included on the card I probably wouldn’t have bothered.

I tried to attend the free cheese making tour; but there was one already in progress so I had to wait next to the sign saying ‘if the door is locked a tour is in progress - wait a few minutes’. Whilst standing there, one tourist pushed passed me and tried the door.

“I wouldn’t be standing here if it was unlocked,” I commented. Perhaps I didn't need to point that out.

Eventually I gave up waiting as my feet were growing weary from standing around. I think it would have been possible to have spent considerably more time in this village; but I was attempting to get back to the hotel as early as I could so I could spend more time resting. In doing so it meant that instead of trying the delicious-smelling waffles and other foods from the bakery and other buildings; I’d got my own packed lunch. 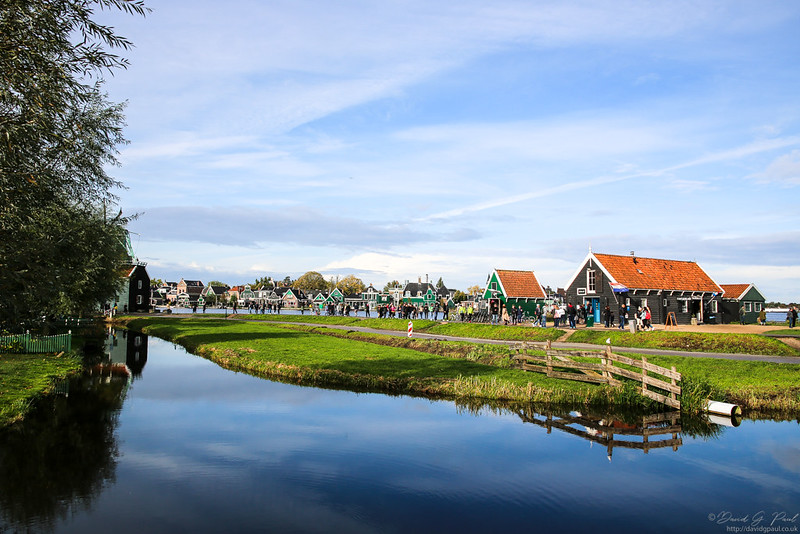 After this light lunch I looked around the Weavers House; though this didn’t take long at all. With how my legs were now feeling I was glad that all I’d got left to see was the viewing platform, and the museum. The viewing platform didn’t feel worthwhile as the views weren’t that different to shots I’d already taken.

At the museum entrance I had to stow my backpack in one of their lockers before looking around. This was mostly uninteresting for me, though the chocolate factory at the end of the tour was a little better. I’d finished just in time for there to be a bus waiting to go back to Amsterdam.

I enjoyed sitting down on the bus, and I thought it’d take me all the way back to Centraal Station where I would just need to cross it to get onto the tram back to the hotel. This was not to be however. The bus, although the right one, terminates before reaching the station so that you have to get a free ferry the rest of the way. It took two attempts for them to lower the ramp on the other side, as the first time they missed.

Instead of rushing to get onto the waiting tram, I walked around the area a little and photographed the Church of Saint Nicholas. It’d be one less thing to photograph later. In doing so, I wandered as far as Dam Station which is where I hopped back onto the tram and took it all the way back to the hotel.

The remainder of the afternoon was spent relaxing, and to be honest it should have been spent sleeping too; but a power nap felt sufficient. During this time I managed to burn my hand making a cup of tea, and then drop my laptop on my right shin. At some point the bad luck had to come to an end.

Eventually it was time to head to the stadium for the pasta party I’d pre-booked a ticket for. It would have been nice to take a tram there; but there were road closures already in place for the marathon which meant the tram from near the hotel wouldn’t go far enough to make it worthwhile. In fact, the time estimate for taking the tram for what little was possible, was actually the same as walking.

So reluctantly I walked slowly to the stadium once more, though towards the end this felt like more of a limp than a walk. It really didn’t help that the diagram on the back of the ticket suggesting where the entrance was, wasn’t actually where it was. It was actually almost all the way around the back. There I handed over the ticket, and struggled up the steps. 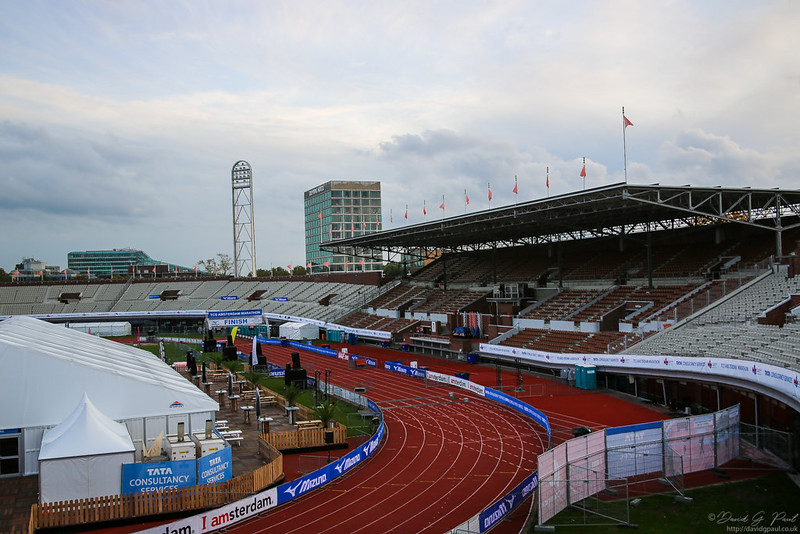 There was a ramp that allowed you to walk over the seating and down into the middle part of the stadium. I think just using the side entrance would have been easier personally; but it did give a chance to see the finish line on the race track. Next time I’d see that it’d be over for better or worse.

Inside the pasta party tent there were quite a few tables with stools around them, and at the far end of the tent was the place to get pasta from. Even though it’d only just turned 18:00 - the time I was supposed to arrive, there wasn’t that much pasta left. I was however able to scrape enough together for a plate, took a couple of bread rolls, and found somewhere to sit. Unfortunately the pasta was a mixture of cold and lukewarm; but it was at least edible. I’d finished eating so quickly that I was done and out of the stadium by 18:20. Unfortunately there were no drinks included with the food. From what I heard when queuing for the drinks it was €4 for a plastic cup of cola or water.

With prices that steep I decided to hobble back to the hotel, and have something to drink there instead. It was a struggle getting up the stairs out of the stadium, and I wondered what this would mean for the race. The aches in my legs seemed to ease a little after ten minutes walking; but the remaining ten or so minutes still wasn’t that pleasant.

It felt like despite my best intentions, it hadn’t been as restful a day as I’d hoped. I’d walked around ten miles during the day. Perhaps a good night’s sleep, or at least some sleep at any rate, would help for the big day to come.