My biggest concern for this trip over the last few days had been whether there’d be a hotel room for me when I eventually arrived in Amsterdam. During the previous weekend, I received an email from the company I’d booked through to say my credit card needed updating. I updated it immediately and thought nothing more of it, until the following night when I received an email to say my hotel booking was cancelled. Less than a week to go, and I now had nowhere to stay. What am I going to do?!

I frantically logged in and found that it said I’d provided an invalid card: even though I could see it was valid and working. I emailed the hotel hoping to find out what was going on; but eventually grew impatient and called them. I told Julia, their receptionist, about the email I received, and was told the computer said I’d not yet provided new card details: even though I had. She then decided that there was an issue with the system, and she could see I’d provided new details so was unsure why it’d been cancelled; but would look into it.

Time passed, and I grew more and more nervous. I saw the room I’d got become available on the website once more. I called the hotel in Amsterdam again, unsure what I was going to do. It occurred to me that I didn’t know if they were going to actually fix the issue themselves, or if I needed to rebook on the site. This time she said she was talking to the manager, and would contact me shortly. Fair enough; but it didn’t stop me from scouring the websites for alternative locations in case the worst happened. I couldn’t waste four months of training, and what I’d already spent on pre-booking tours and transport.

Whilst I was waiting, I became tempted to try and rebook it myself; but the room had already gone. Had someone else booked it? Was it still possible for them to fix this?

Eventually, after what seemed like an incredibly long hour had passed, I received an email with confirmation my booking had now been recreated directly with the hotel, and would no longer be through the booking website. Things seemed like they might just be okay; but at the time I’d got almost a week to wait before I’d know for sure. Now I was down to just a matter of hours.

It makes a nice change to not have to get up extremely early for a flight. I’d got train tickets booked for mid-morning so had time to go for one last easy training run before needing to get to the train station. Knowing I’d have a fair bit of time on my feet ahead of me, I was very careful to keep this run short and slow. It wasn’t a pleasant one though as I’d woken up with a bad back that was also making my abdominal muscles work.

For the rest of the morning I took my time, and eventually headed to the train station. When I got to Birmingham New Street the handle broke on my suitcase which meant I could no longer wheel it, and instead had to carry it to the next train. Off to a great start it seemed. Hopefully there’d be no further bad luck ahead.

Eventually I’d reached the airport and dropped off my luggage. Airport security took a little longer than normal as not only do they insist on removing your laptop from your bag - which makes sense, they also require it to be removed from the thin protective sleeve. This makes less sense. Whilst discussing that with airport staff I forgot to take my wallet and phone out my pockets so went through the metal detector with them. Okay, first time I’ve ever done that and it meant having to go back through again without them and then getting the more thorough scan.

By the time I got through security it was only thirty minutes until my flight, so found somewhere to sit down and eat my lunch before heading to the gate. It seemed the majority of this full flight was a school trip.

The flight left late due to the previous flight having come in late; but we hadn’t lost much time. During this flight they served a light snack: egg sandwiches (yuck!), stroopwafel, and a drink. Between this service and reading my book, the flight passed in what seemed like no time at all.

If you ignore how far across the airport it is to reach arrivals, the arrival itself wasn’t too bad. They’ve got the same electronic gates they have in UK airports - this speeds things up. Then to make it even quicker the luggage belt was right next to arrivals. I noticed that from this baggage hall I could have booked transport into the city; but I’d already got a hotel shuttle booked - once I’d collected my bag. 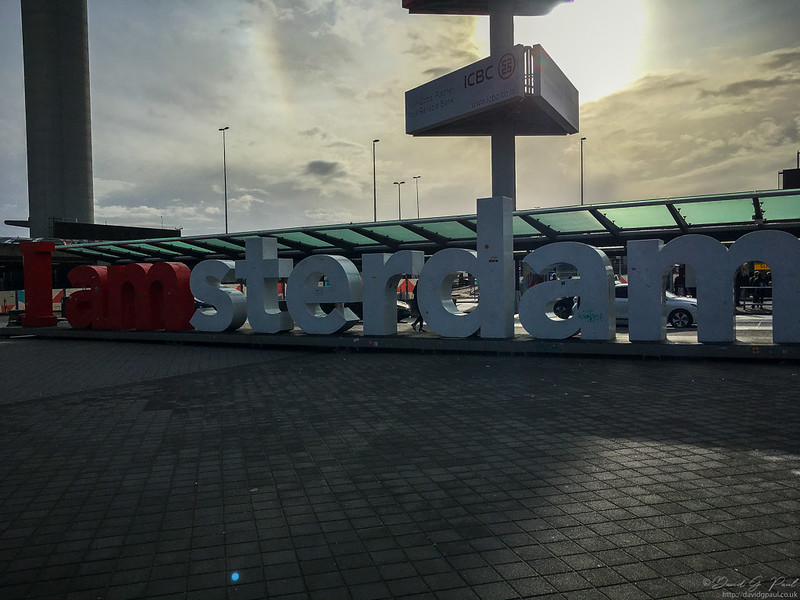 It didn’t take long to find the right stand in Schiphol Plaza, and was on the shuttle bus just after 16:00, with it setting off just fifteen minutes later. I’d arrived during rush hour though, so the trip ahead was going to be long. Not the most pleasant time to have back ache.

Once I reached the hotel I got checked in, and dropped off my bags. Typically I was on the top floor - something I imagine I wouldn’t be keen on by Sunday afternoon. As it was, the reception remembered that I’d asked if I could have a room with a fridge and pointed at a fridge on the worktop. So there I was carrying a fridge up the stairs after I’d carried by bags up.

Once I’d emptied my backpack, I grabbed my camera and headed out into the city. My main task now was to collect my race number for the TCS Amsterdam Marathon. Fortunately I knew the direction to head in, and even if I hadn’t I’d got an offline map to use.

On the way there I passed by a supermarket so made a mental note of where it was for later. Over the road I could see a gantry that had a message on it to congratulate the runners. It was a bit of a goosebumps moment seeing it. Behind that were a series of flags and a sign saying “I amsterdam” with people having their photo taken in front of it.

Beyond this was the Olympic Stadium where on Sunday the marathon would be finishing. Today was not the day for going inside though - the marathon expo was in the south hall which was over another bridge to get there. 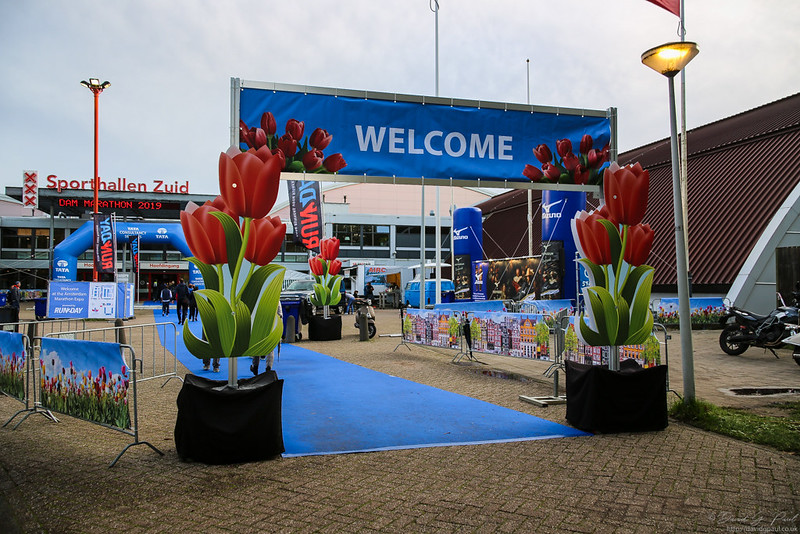 I could imagine first thing in the morning it would have been far busier than it was now; but there were still quite a few people about. Inside the hall I collected my race number without queueing, and the same when collecting my race t-shirt. In order to leave it was then mandatory to walk through the next two halls of the expo, so had a look around anyway. The prices for the official merchandise were as steep as you could probably imagine.

On the way out they were giving people free Nature Valley cereal bars, so I put one in my bag for another day. Tomorrow I’d be back here for their pasta party - hopefully it’d be okay. For now though it was time to do some shopping. Since the room now had a fridge I picked up milk, water, juice, apples, and a few bits to make sandwiches for later in the trip. Hopefully I wouldn’t need to do any more shopping now unless I needed more water. 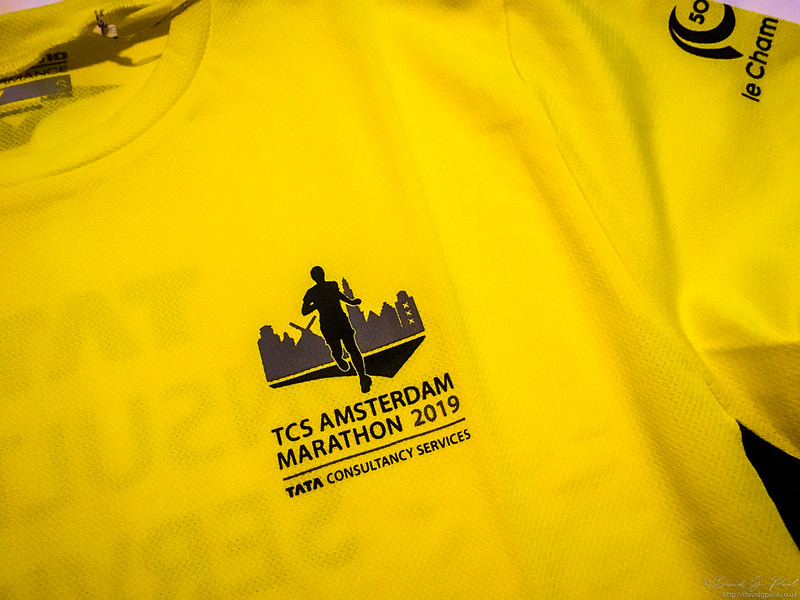 It was getting late, and the sun was beginning to set, so I started walking north along the Stadiongracht until it crossed a road that went to Vondelpark. I knew there was an Italian restaurant near there so followed it. Along the way, I actually passed an Indian (maybe not the best choice this close to a marathon), a Korean, and several other Italian restaurants before getting there. Looking in through the window, I couldn’t see any sign of being able to eat in: it seemed to be a takeaway. As there were other places, I decided to try Mangia’s.

I asked for a table for one, and was told it’d be an hours wait so would need to put my name down for a table. When I said I’d try somewhere else first they decided that as it’d just turned 19:00 they’d got a table free for an hour so I could have that one. Several minutes later they returned with a menu, and what must have been less than a minute later they were there to take my order. I’d not even finished reading half of the menu! However, I went for the first thing that sprung to mind: lasagna.

It only took ten or so minutes to arrive; but was a little burnt and smaller than restaurants back home would have served. It was however still sizzling away, and tasted okay. By the time I’d finished eating only twenty minutes had passed! It did however take another fifteen minutes before I’d managed to get a waitresses attention to pay the bill and leave. I still gave them a 20% tip though as they’d been good enough to squeeze me in which saved me the trouble of finding somewhere else. 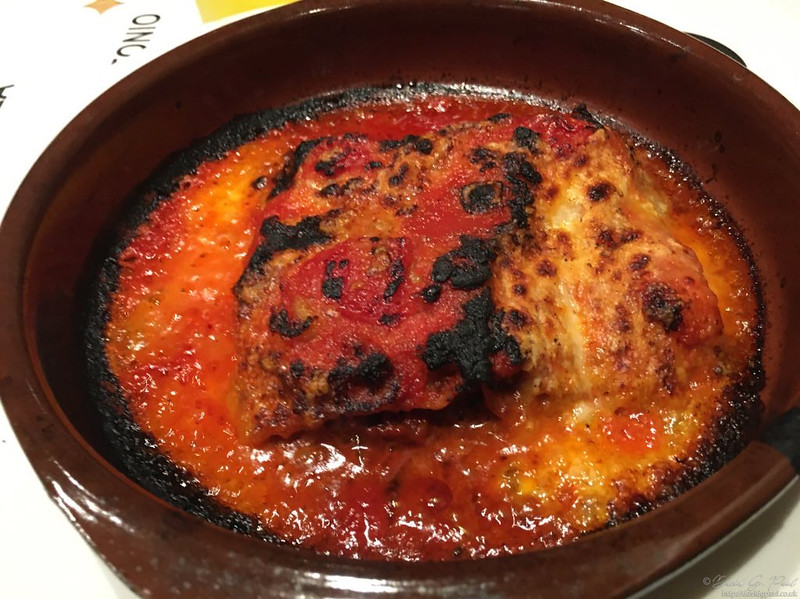 To get back to the hotel I headed through the dimly lit Vondelpark. There was the occasional light which provided just enough illumination to find your way to the next lit area. It was crazy to see people out running without lights or reflective clothes though. They could easily have been hit by one of the many bikes zipping through the park.

That’s the thing about Amsterdam: you really notice how present the bikes are. They are literally everywhere and you almost have to pay more attention to them than the cars. Fortunately I’d not had any close calls yet.

I'd been walking swiftly, so back at the hotel I could finally relax, and hope that in the morning my back ache would be feeling better.