Nine years ago we went on a hike of the Tongariro Crossing. It did not go well. New Zealand threw almost everything it had at us. There was snow, rain, and winds of around 120 kmph. We’d barely seen the emerald lakes even though we’d had lunch next to them - visibility was just so poor. We’d summited Mount Tongariro, but had seen nothing. After this we’d turned back and left the mountain as quickly as possible, going off the trail for some of it to descend below the elements with haste.

Today it’s not possible to climb Mount Tongariro as the peaks are protected as sacred lands for the Māori people. Two years after we visited there had been eruptions and new restrictions were put in place on the tour operators which meant now if the wind exceeds 65 kmph they have to cancel. There are also other measures in place affecting traffic and parking so our tour had to be done through a company that would drop us off and pick us up afterwards.

After a light breakfast we were collected from the motel and taken forty-five minutes south to the car park for Tongariro. Once there, a second bus load of people joined us, and after a Māori prayer they sent us on our way at our own pace.

To start with the journey didn’t seem all that familiar - I guess some of it looked different in sunshine, and it was a long time since we last saw it. Memory can be a funny thing. The path continued to wind and eventually we reached the boardwalks long after I remember them from before. They led us to the start of Devil’s Staircase where we stopped for second breakfast - a chocolate croissant. 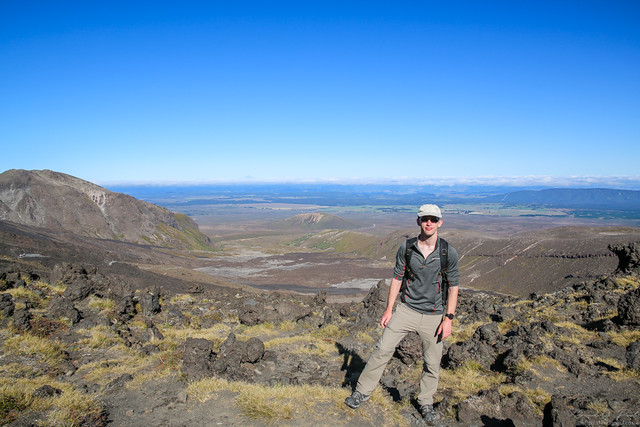 With our inner-Hobbit satisfied we began the long, slow hike up the staircase - slowed mostly by the amount of traffic going up there. What a difference nine years and some good weather makes. When we reached the top the plateau seemed smaller than I remembered, even though last time the fog had meant that we’d not been able to see the boundaries of it. Perhaps the wind having slowed us so much is what made it feel longer last time. 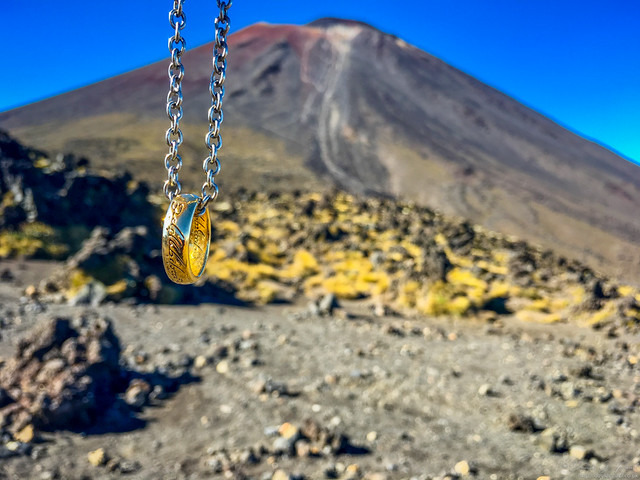 This time we made a small diversion to see the South Crater at the base of Mount Ngauruhoe. This was used as Mount Doom in Peter Jackson’s The Lord of the Rings movies, so of course I had a replica of the one ring with me. Maybe I couldn’t cast back into the fiery chasm from whence it came like Frodo had - but I could at least take a photograph of the ring in front of it.

We were making good time, and only stopped a couple more times on the climb to the highest point of the crossing where we could photograph the Red Crater from. I’d thought the south crater was quite red; but this one was darker, and completely red. This climb was one of the hardest bits for James due to his fear of heights - the path can get quite narrow in places. At least it didn’t have us jumping across washed-away sections like we had last time when it had seemed like a chasm was to our side. 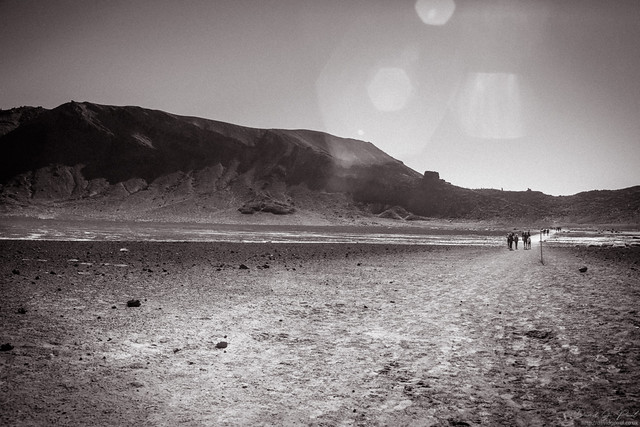 From the summit you can also see the emerald lakes ahead - all three are different shades, and are surrounded by steam spewing from vents. The smell of hydrogen sulphide was strong here - though I think we may have eventually gotten used to it.

For the descent past the lakes this was hard work due to the amount of loose ground there is there. Most of it was more of a slide than walking, though I was able to stop in places to get a few photographs. I remembered this as being where we’d eaten our lunch last time. We’d not seen the lakes properly, but we knew they were there. Last time we’d turned back at this point, summited, and returned to the car park. Today we were continuing on into unknown territory for us.

We had a choice on where to go next - fork right and take a longer route along terrain that was uneven and loose, or left which was flatter and shorter. James wasn’t keen on more of the same, so went left whilst I went right to get closer to the blue-hued emerald lake.

We met back up on the far side, and continued passed the center crater on what we hoped would be the last ascent. This took us to the blue lagoon, but it was not over. When we began descending we could see a hut at the end of many long switchbacks, but after this there were a few more slight climbs before descending further. 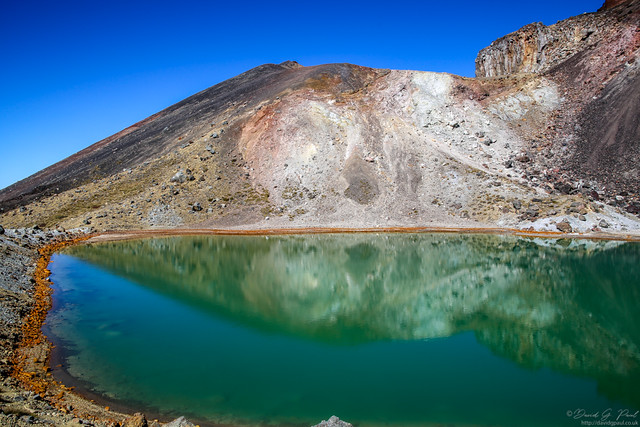 The descent had caused us to pick up speed, and it seemed that after our 08:00 start we were going to make it for a 01:00 pick-up. Then disaster struck with only one kilometre to go. James slipped on some wood and twisted his ankle badly. I think he was lucky he was wearing walking boots as they may have cushioned some of it, but he wasn’t able to walk on it. He thought it may even be broken it hurt that badly.

It reminded me of the time I twisted my ankle in Russia, though in James’ case he was fortunate he already had painkillers and anti-inflammatories to hand. Perhaps taking them swiftly would help, though he didn’t think he could continue - he was in a lot of pain.

I found a long stick and gave it to James as a crutch, but it wasn’t really helping. So for a while he leaned on my shoulder on his injured side, and held the stick with the other. Many people asked if he was okay - obviously limping like that he wasn’t. A Canadian couple stopped and suggested using the strap from his camera bag to try and support the ankle some more. I’m not sure it helped much really, and if anything could have been restricting the flow of blood to his ankle.

Eventually a Scottish couple who had moved to New Zealand passed by and leant James their walking poles. This helped him considerably, and using them he was able to find some rhythm to keep going. Being able to stand on the ankle like that was a good sign - it’s very rare an ankle breaks, no matter how bad it feels. I learnt that lesson after Russia - though I had chipped a bone in my case. Perhaps James had done the same here.

We arrived at the end of the crossing at 13:20 - too late for the pick-up we’d hoped for. James called the tour company, explained what had happened, and confirmed we’d be picked up at 14:00. We’d got forty minutes to have lunch, and relax a little - though James didn’t feel like eating. My sandwich hadn’t survived the crossing well, and tasted awful, so I discarded that and ate the Snickers bar which had survived okay.

Whilst I ate, James contacted his medical insurance company as he figured he’d need to visit the hospital to get his foot x-rayed. The nearest one was in Taupo, so we’d need to get back to Turangi first and then continue on to there. I felt it was unlikely to be broken, and that there was little they’d do if it was.

We made it back to the motel pretty quickly, and James checked how his ankle looked. It hadn’t swelled, so perhaps taking medication quickly had helped there.

James asked if I could go to the supermarket to get some ice, so decided I could get some lunch for the next couple of days whilst there. The choices weren’t great, so for myself I bought some rolls and some ham, whilst I bought salads for James.

After applying the ice, he spent the majority of the afternoon relaxing until eventually we decided to go for food. As it wasn’t a Tuesday it meant most of the food places were now open, so we went to Rust for a burger. I think it was probably some of the best food we’d had in days.

When we got back we found we’d locked ourselves out of the room - the only time I’ve done it in twelve years of travel. We didn’t realise straight away either, we’d spent a couple of hours sitting out on the decking, talking to a New Zealand couple about travel and all sorts of things.

Hopefully in the morning James’ ankle would have made some improvement.