There was very little we’d planned for today, so a late start was always something that was going to be possible; though with James’ accident it meant it was possible we wouldn’t be doing anything at all. What this meant to me was that I could go for a run later in the morning and get more sleep than I’d been getting. The only problem though was that the later I ran, the harder it’d be due to rising temperatures.

After breakfast I spent some time backing up photographs, and then went out for my run. At first I didn’t think the heat was too bad; but my legs felt dead. I was certainly feeling the effects of having hiked the Tongariro Alpine Crossing the day before. I soon ran out of road, but found the entrance to a trail that ran behind the accommodation. I remembered this was something the owner had mentioned when we’d checked in so thought perhaps this was a good chance to check it out. This too eventually ran out, so I crossed State Highway 1 and ran through the town before turning back. 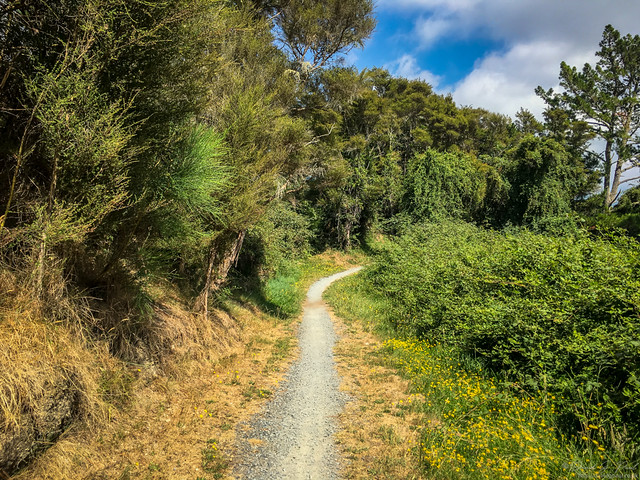 When I got to the end of the trail I'd started on earlier, I noticed a rope bridge further ahead, so thought I’d carry on. I found this was the start of the Tongariro River Walk, and the map included the bit I’d already run - so didn’t look too far to do it all. The path wound through forest on an undulating trail until it was alongside a field of cows with no shade from the midday sun. I was getting so hot and didn’t have any water with me; but was glad I’d had the sense to apply sunscreen first.

I started to wonder if the trail was ever going to end, so looked at a map on my phone to see where I was. It seemed the trail would eventually turn back somewhere around the National Trout Centre which we’d passed on our way to Tongariro the day before. That seemed like a long way. Had I committed myself to running a half marathon? 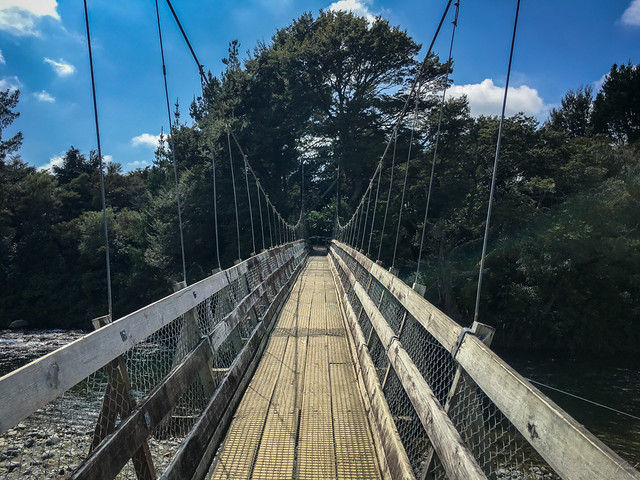 I wondered if I’d made a terrible mistake, but figured one way or another I’d make my way back to the motel - no matter how long it took. Sure enough, I eventually reached the turnaround point after crossing another rope bridge and began the long run back. There were a few walkers I passed, but no matter how many times I said “excuse me”, they didn’t listen so had to run onto the grass to get passed. Eventually I made it back to the motel having completed over 10.5 miles.

The first thing I did was to drink plenty of water, and then after a shower had a late lunch. James had been watching TV in the motel during this time, so afterwards had a few games of pool to make some use of the afternoon.

When it was time for an evening meal we went to an Italian restaurant in town. The door was open so we walked upstairs and asked if they’d got a table for two. The owner rudely replied that they’re not open yet, and as we were turning to leave she said we could sit down and wait.

I went for spaghetti bolognese, which was nice and James went for a ‘surf and turf’. He seemed to enjoy most of it, but there was one prawn left at the end which he didn’t seem too sure about. When the waitress collected our plates he pointed out the prawn saying it didn’t seem right as it was black in places. He was concerned that even though the others had been okay, that they may have more with the same issue, so wanted to make sure they knew.

The owner and the chef came out to confront James and said there’s nothing wrong with the prawns - they’re black tiger prawns. James said that was fair enough, he’s still going to pay. Despite this he could still hear them talking amongst themselves about his comment.

We went up to the bar to pay, and then left. As we went the owner followed us out, and photographed at least James using her iPad, and then again from the street when we were getting into our car. Very strange behaviour, but from the reviews we’d read since it seems people generally get bad experiences from that place and wasn’t recommended at all. At least we knew why.

It was another warm evening, but perhaps it’d be possible to sleep before continuing on to Waitomo via a return to Rotorua. Though with the windows open to try and keep the room cool we were finding large insects such as Chorus Cicadas were flying in to keep us company. It was going to be a long night.