I’m pretty sure if I’d slept outside on the decking it would have made no difference to how I slept. I was covered in insect bites, and didn’t really feel like going for a run - it didn’t help I’d not fully got my things ready the night before so couldn’t really head out without waking my friend up.

After breakfast we drove over to Wai-o-tapu early so we could see their geyser erupt at 10:15. The car park was only a short walk to the visitor centre, but once the tickets I’d booked online had been collected we then had to drive to a different car park specifically for the Lady Knox geyser. Not ideal for James when his ankle was still causing him a lot of pain, so I dropped him off at the entrance whilst I went to park again. 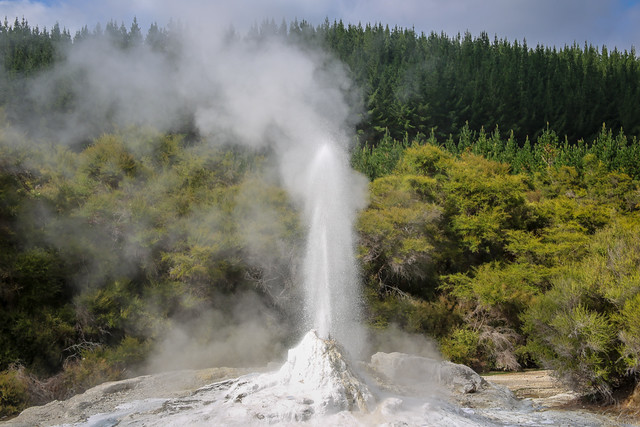 The show then starts with someone explaining that the area used to be a prison and the story is that one day a prisoner dropped a bar of soap in the geyser they washed their clothes in. It erupted sending their clothes everywhere, and they found by piling rocks around it to create a funnel it would make them blast higher. Over time the silica from the water has hardened around it to create something that looks like a plaster cast volcano.

With the explanation complete, they dropped in a bag of the most environmentally friendly soap they could. Within seconds it started to bubble, and then these bubbles got higher and higher until it was venting a few metres into the air for less than a minute. The area quickly emptied with people rushing to their cars so they could then get a decent car parking space in the main car park.

I picked up the car, collected James from the entrance, dropped him off at the other entrance, parked the car, and walked back to meet him. It doesn’t seem like the best laid out tourist attraction, but perhaps that is deliberate - for their staff there was clearly a shortcut back to the visitor centre. So they probably want to make sure staff get back first.

There are three walking loops that together equal three kilometres, and they steadily get harder the further in you go. However, despite them saying that none of them are particularly bad for someone who is able-bodied. James of course took this a little slower than most as his ankle wasn’t handling steps great. We still managed to get around it all in two hours - finishing at around 12:40. I think normally we’d have managed this in an hour - even with plenty of photo stops. 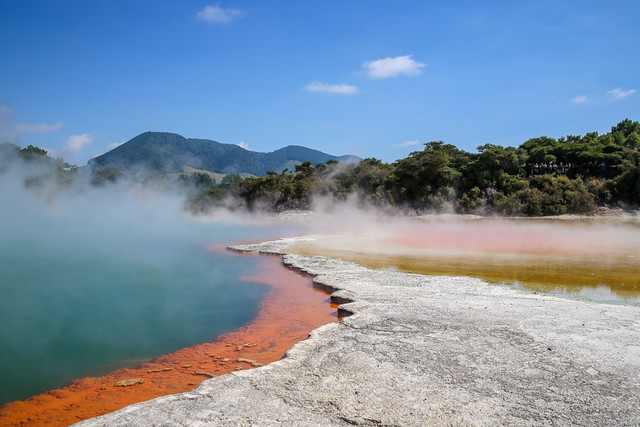 The first loop is one that contains the best of all the sights - the champagne pool which has blues, oranges, and greens separated by a rocky barrier, and the luminescent green of another pool. By going onto the farthest loop you can also see the Lake Ngakoro waterfall. 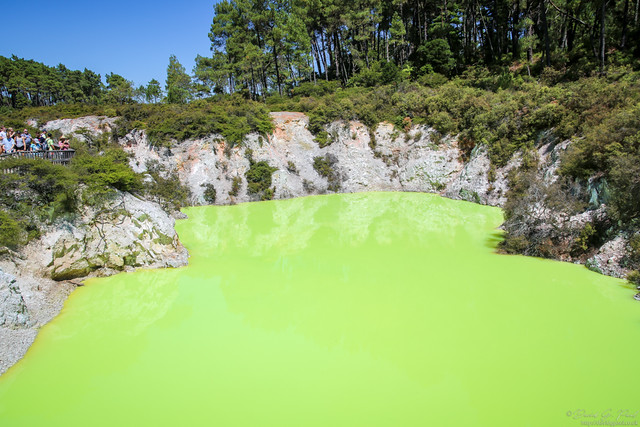 Once we’d done we thought we’d check out the cafe there. Like the ticket office, the cafe is cashless which means everything has to be done using card payments. With a UK debit and credit card this means a foreign currency transaction fee for every purchase. I decided on a cheese, pineapple, and chicken toastie - though it was a little anaemic when it came to the filling. I'm not sure there would have been anywhere better to have found lunch nearby though.

Slightly further down the road there are also some mud pools that don’t require your ticket in order to see. These are actually quite good as you can see reasonable sized eruptions of mud if you watch for just a few minutes. 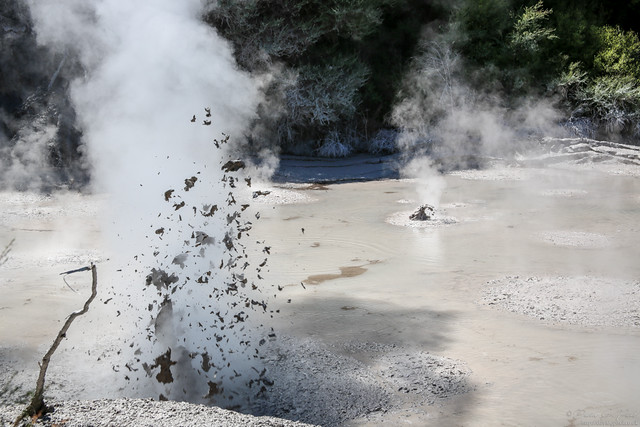 For our overnight stay we’d be outside Waitomo so we could get an early start for the caves the following morning. It was a long drive, lasting over two hours, and wasn’t helped by the satnav guiding us onto a road it then decided didn’t exist. It seems that perhaps there was a smaller road there before, but it’s now an expressway. It took some effort to find our way back onto the right route, but once we reached Cambridge, all seemed good.

The room near Waitomo had kitchen facilities again, so we’d be able to sort our own breakfast as we had been doing. It was however still quite warm - but with far fewer insect intruders. So far.

To get anything to eat at the end of the day, we had to drive around eight kilometres back to Otorohanga. We’d decided on pizza, and saw that they did a special deal where you get a large drink, and a side for a few dollars more. It’s incredible how much food there was for this - it was so much I couldn’t finish mine and actually had to dispose of some of it.

At least the evening was cooler too - it meant a decent night of sleep might just be possible.