It was another warm night, and this motel didn’t have any air conditioning, so when I got up at 05:45 for a run, I’d not had as much sleep as I would have liked. I started off slowly, and decided I’d see how I get on. I ran to Lake Rotorua and around some of it before returning back for breakfast - having completed five miles. 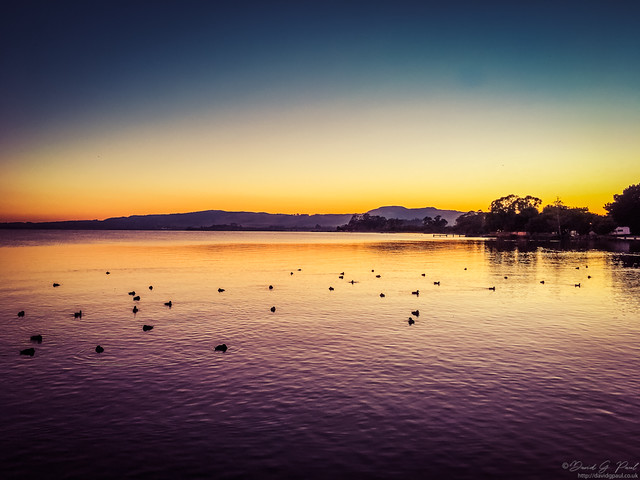 Whilst I’d been out I’d received an email from the accommodation in Thames to say that they’d found James’ sunglasses there as well. So now we were planning on how we could fit in a return trip - it seemed like the best chance would be a diversion on our way back to Auckland at the end of the week. For now though, I was driving us to Matamata for the one thing I’d been waiting for: a tour of the Hobbiton movie set. Of course, this would just so happen to coincide with the return of the clouds.

Not long after we parked up and collected our tickets, it started to spit with rain. I was determined this wasn’t going to ruin the day I’d be waiting so long for. I was going to see the Shire, I could see the entrance to Bag End with my own eyes, and maybe even sit down for a drink or some food at the Green Dragon. These were books I’d enjoyed for so long, and had enjoyed them in every medium I’d seen them in, from the books to computer games, and of course the Peter Jackson movies this set was from.

I knew this wasn’t the set from the Lord of the Rings, it was the set from The Hobbit as they decided during the pre-production of that film that it would be good to make this something permanent for people to enjoy. I’m glad they did. 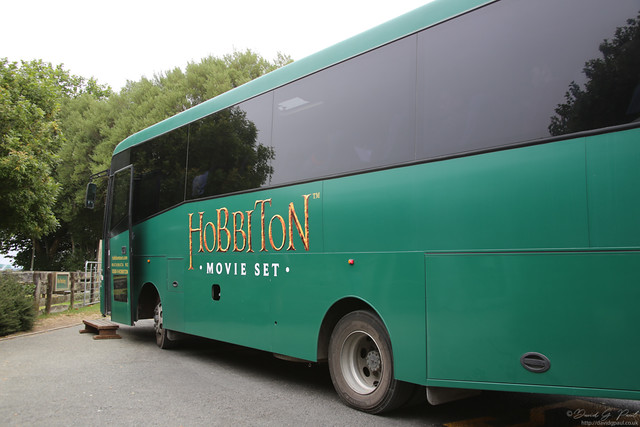 The bus took us from The Shire’s Rest on Buckland Road to a coach park a few minutes away. A guide then led us along the same path that Gandalf had walked through, and we saw Hobbiton for the first time. Hobbit holes littered the hill side, with Bag End proudly at the top underneath an old tree. In front of us was a vegetable garden, and a hobbit hole we could see up close for the first time.

I took so many photographs over the next two hours - hundreds of them. We walked slowly from hobbit hole to hobbit hole, and was told about them and the filming process - including how the tree atop Bag End was made. Peter Jackson had cared about every single detail, such as thinking pear trees are too tall for hobbits, so he got small apple trees and wired on plums to keep it true to the books. He’d even had someone paint every leaf on the fake Bag End tree to make sure it looked the right colour on film after delays had allowed the leaves to fade.

Sadly it did rain during this tour, but we got to stand inside a hobbit hole door for pictures, and to see Bag End up close. The tour ended with crossing the stone bridge, and passing the water mill to arrive at the Green Dragon for a free drink. There were three different alcoholic drinks to choose from, and ginger beer. Not being a drinker, I didn’t have any of them. I was the designated driver too. I spent the time inside and outside photographing everything I could find, and trying to soak in the experience. I sat in one of the armchairs in front of the fire inside as well. I could imagine hobbits having fun in there. 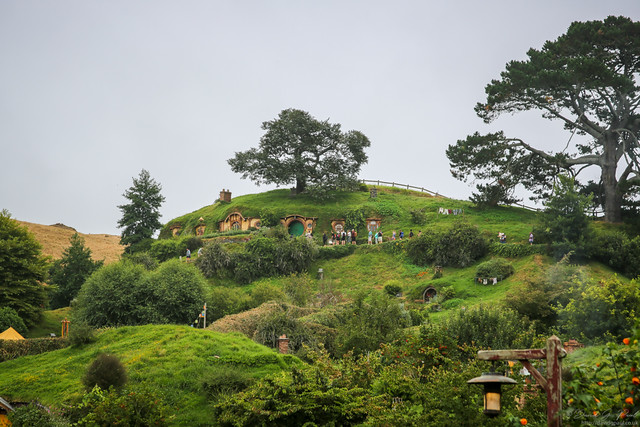 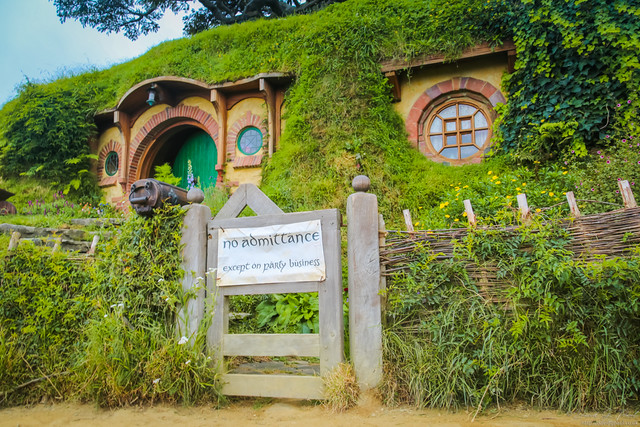 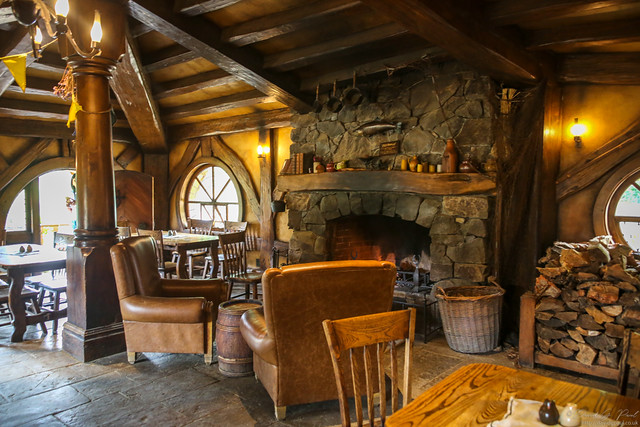 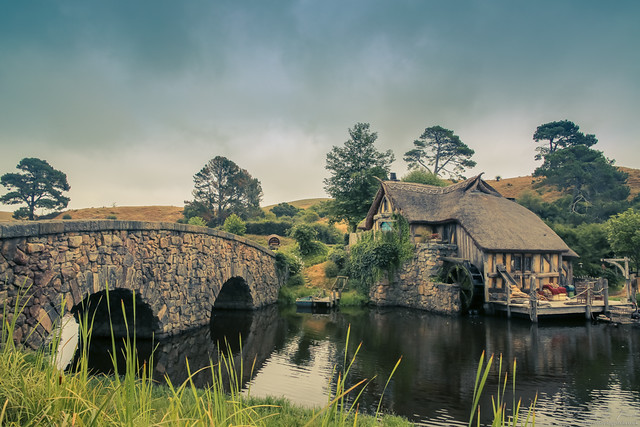 It was almost midday, and the sun was now coming out as we made our way back to The Shire’s Rest and the cafe for food. I had a chicken sandwich, and bought a caramel slice to have later. I also bought a couple of souvenirs to remind myself of the time I spent in Middle Earth.

Our day was not yet over - from there I’d got over an hours drive to Huka Falls and Craters of the Moon. I was tired of driving though, but carried on as I knew I’d soon have some rest. I think the main need was sleep as it felt like I’d had so little as of late.

When we reached the falls our fuel was running low - the light had come on long before we’d arrived. It seemed that between powering the GPS, the air conditioning, and the constant hills, the car was guzzling petrol.

Huka Falls was nice and quick to see - we parked up, and two minutes later we were photographing the raging torrents of the falls. It seemed unbelievable that was all there was to it - especially when we could see there were hikes; but we’d seen the main attraction already. 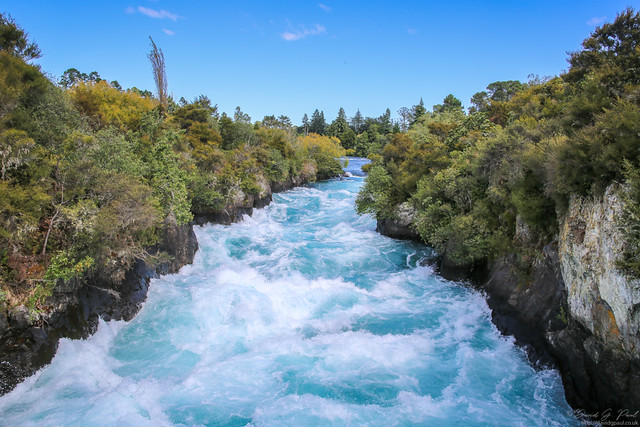 We hopped back in the car and drove to the Craters of the Moon next - this one was NZ$8 to enter. If I’d seen this one before Te Puia then maybe I’d have found the fumaroles to be amazing. However, in this post-Te Puia reality they didn’t seem all that special. The entire walk should take on average about an hour, but of course we were done before that - even with long stops to photograph each crater.

Fortunately we came across a petrol station shortly after we left there, just as the needle on the gauge was moving around to empty. We’d gotten lucky, but for now all we put in was NZ$40 as we were unsure how much more we’d need in the coming days. Perhaps we’d use an entire tank again, but this took us to around half way. Not that it lasted.

The drive from there to the motel in Turangi was quick, and the check-in even quicker. The owner told us about some nearby restaurants that we could try for food, and explained how the kitchen and lounge here would work. The room was very small as a result of the facilities being elsewhere, but at least we had our own showers. Unfortunately the floor space was almost non-existent.

We dropped our luggage down in what space there was and headed to the supermarket for food - this would sit in the shared fridge in the motel until we needed it. It would be what we’d need for breakfasts for the next few days, and food to eat whilst out on the Tongariro Crossing. Time was already getting late, so decided we should find somewhere to eat. 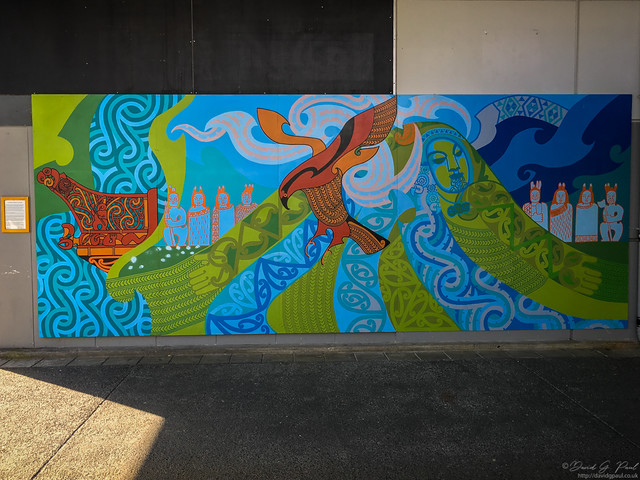 We tried an Italian restaurant first, but that was closed on Tuesdays. Wandering around aimlessly we found another, but they were closed too, and then a third we found was closed due to bereavement. This left us with two restaurants left in town - the first was the gourmet burger place, and the other was a pub. We found the burger place was closed too, but fortunately the pub was open - just it closed at 19:00 so it was lucky we’d headed out early.

I had a beef lasagna with garlic bread - it seemed like a good way to ‘carb up’ for the long day of walking ahead. I’d have preferred spaghetti bolognese just like I would before a long race - but at least this lasagna was better than the ones I’d had in Ljubljana and Geneva.

All we needed to do now was to get ready for the morning - though our expected start time of 06:00 changed to 07:00 at the last minute as the bus company we’d paid NZ$50 each to had said they’d not had enough people book for that slot in order to run it. It wasn’t ideal; but what choice did we have?