Training for a marathon really can take a lot of dedication - there was nothing I’d have liked more than to have gotten some more sleep; but at 06:00, almost an hour before sunrise, I was up running more miles in an area I already knew was undulating. Ideally I’d have done five miles, but I decided after four that was enough - I kept on going briefly, but the hills were just too much for me at this time.

Breakfast had been prepared by our hosts at the cottage, so ate that quickly and we were on our way to Te Whanganui-A-Hei Marine Reserve - better known as Cathedral Cove. This was something of a challenge even though it was only about seventy-five minutes away. The road wound furiously around the mountain passes, with constant changes in elevation. We went from having about three quarters of a tank of fuel, to around half from just this. I found this really worked my back muscles, and was tiring.

We parked up on Pa Road, and took a shuttle bus to the start of the trail for the cove. This is a bus that runs around every fifteen to twenty minutes and only takes four minutes to get there. You can’t park at the trailhead itself as these days they get far too many people. In fact, over the Christmas and New Year period they will get a few thousand locals arrive as this is their favourite place to spend the holiday period.

I noticed at this time that the dial mode plate on my camera which had come off whilst at Karangahake Gorge, had come off again at some point during the morning - this time I’d lost it. I later found it was possible to buy replacements off eBay for these, so was quite fortunate.

From the trailhead we followed the trail, mostly without shade, until we reached a fork in the road to carry on to the Cathedral Cove, or go to Stingray Cove first. We decided as it was listed as a short walk we’d risk going there first. We could see huge swells on this one which was causing massive waves to come crashing into the rocks. It was a good indicator what the other beaches might be like.

Back on the trail to Cathedral Cove it took under twenty minutes to finally arrive at the steps down. Again this was an undulating trail so we were already warm when we got there. A lot of people had arrived ahead of us and were using the beach for fun. To our left was an archway with people sheltered from the waves, and to the right was another cliff face. Again, the waves here were so big that they’d crash almost to the top of the high cliffs. 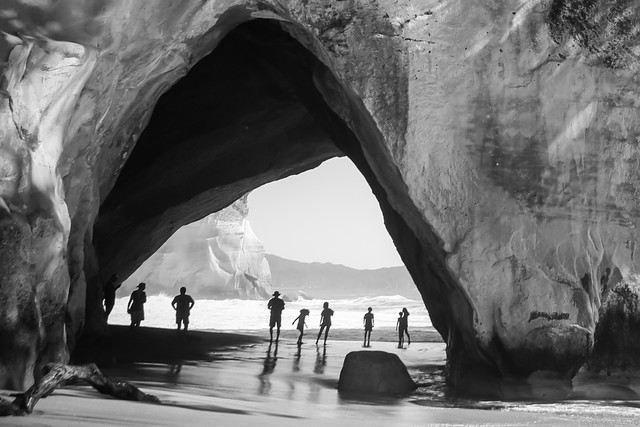 Even with the intention of stitching several photographs together to remove people from them, it wasn’t easy to get the shots I wanted. Part of the reason was that it was almost high tide too and the places I stood to take pictures kept disappearing under waves. Somehow I avoided getting too wet, even though my feet did get a little damp. I was also able to time going through the arch, as seen in Prince Caspian, to take more photographs.

Our return journey wasn’t that much slower, and was back at the trailhead a little before 11:00. The shuttle arrived on time and got us back to the car park nice and quick so we could begin our long drive to Rotorua.

Some of the road seemed familiar, but then it would considering we’d travelled down it in the opposite direction about two hours earlier. However, when we got to a sign for the Lee Road car park, we realised something was amiss. It turned out that the satnav was still programmed for taking us to Cathedral Cove as well as the Rotorua address we’d given it so it’d taken us on a fifteen minute loop first to return us to where we’d started. Why it didn’t ask to perform a U-turn when possible, early on, I have no idea.

On our second attempt at leaving it went correctly, and we found ourselves once more on the winding roads through the mountains. At Tairua we stopped to buy lunch - a pork riblet in ciabatta bread. They warmed it up for us, but by 13:00 when we ate it they’d gone cold.

It’d been hard work driving to that lunch stop, and when we got there we’d chosen a place with a decent view; but also the most bizarre thing - ten chickens wandering around far from civilisation.

I’m sure the drive lasted a lot longer than it did - I was exhausted; but it was only 15:15 when we arrived in Rotorua. The motel was an interesting one from the moment we arrived. As we were checking in there was a police officer knocking on the door of one of the rooms. When we went to collect our bags from the car they were calmly sitting, and talking outside.

This was when I started to notice other things about the motel, such as the gaping hole in the roof in the corridor where you could see not just the pipes above the rooms, but also the corrugated metal of the roof above. The room itself seemed okay with a cursory glance, but spending too long in there we started to notice things such as mould on the walls, and footprints on the bedding. The towels were so old they were threadbare - long past the point most people would have binned them.

At least it would only be one night - it could be worse, right? So we headed to Te Puia for the tours we had booked. It was only down the road, but it would have been about a forty minute walk so didn’t really want to repeat that in the dark later so drove.

Our guide for the Te Rā tour was Ho, who repeated everything twice to ensure we’d all heard it. No excuses, right? The first piece of information he imparted on us is that the Māori like long names - Te Puia for example is short for Te Whakarewarewatanga O Te Ope Taua A Wahiao. I could see why they’d shorten that for tourists. 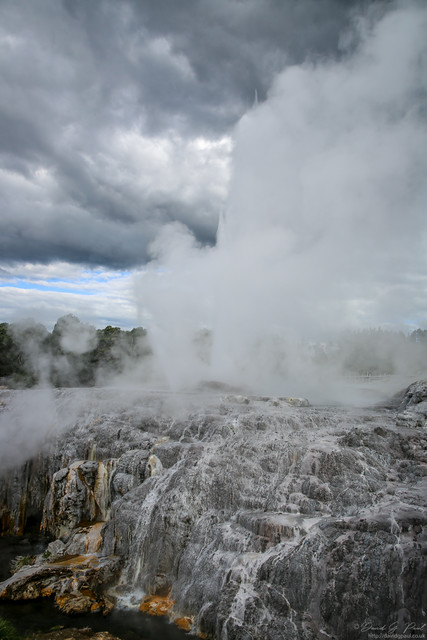 The story behind the name also explained that their tribe was responsible for the haka - made famous by the New Zealand rugby team. This is the war dance they would do before battle - to intimidate their opponents.

The guide pointed out to us their longhouse which would be used during the evening tour, and then a viewpoint of the geothermal valley. The view wasn’t bad, but we knew we’d be getting closer. We thought we might get to see some kiwi as well as they have a pair in captivity, but we never saw anything in their enclosure.

Next we saw mud that was boiling with a strong smell of hydrogen sulphide. In fact it wasn’t just the bubbling mud the smell was coming from - it was everywhere, but was certainly getting stronger the further along we went.

The main attraction at Te Puia are the three geysers - one of which can vent up to thirty metres into the air. What an impressive sight they must be when they’re going off I thought to myself. Whilst photographing them the steam changed to an eruption from the Prince of Wales geyser. 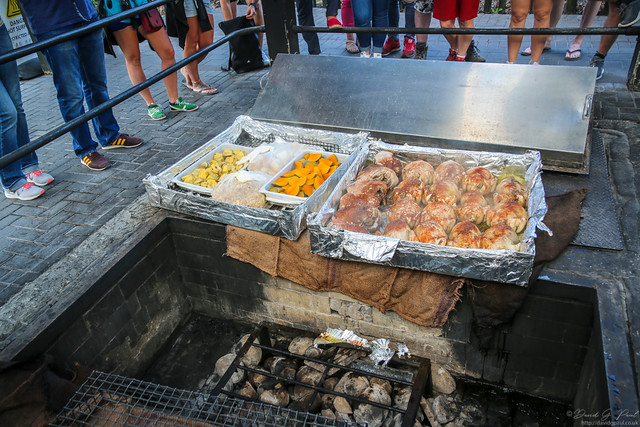 Having seen one small eruption I carried onto photograph the area from different viewpoints, and started to walk back to the designated meeting point. Leaving there was delayed though as the guide realised the big one as about to erupt. Sure enough it did! Maybe it wasn’t as high as it could get, but we were incredibly lucky to see it in action. All this left of the tour was the art centre where we could see Māori working on jewellery, wood carving, and weaving. 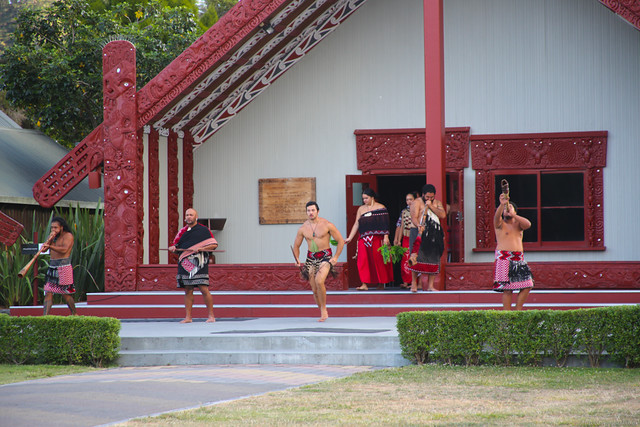 Once through the gift shop, of course, our evening tour, Te Pō, began with a quick introduction and then being taken to see how our food was cooked. Our group got there first, so we saw them uncover the pit in the ground where inside was a basket filled with whole chickens, potatoes, vegetables, and so much other food. All of it had been cooked on stones that had been heated up like a barbecue, but then covered over in the traditional Māori way.

The groups then lined up in front of the Māori longhouse, and their designated chief came running out of the hut brandishing a taiaha (Māori spear-like weapon) in one hand, and a leaf in the other. This was a peace offering, and once accepted by the eldest in our group we were welcomed inside for a cultural performance with audience participation. 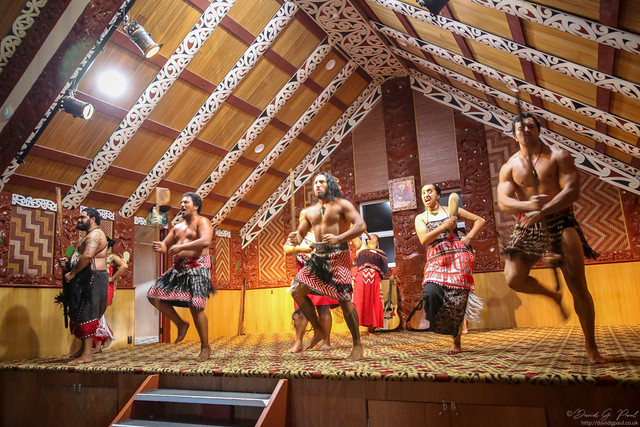 They sung songs, and did dances, and then got female audience members to join in on one of then. Afterwards they performed a haka, and asked for male volunteers to join in. With this it brought the performance to an end, and the time for food was nigh.

We were led into a big dining room with tables set-up ready, and a buffet for us to tuck into. We were called up table by table, and the choices were vast. I tried a little of a lot, and was quite full by the end. However, they also had desserts to choose from so held back just a little. The dessert selection wasn’t as good, but decided some chocolate mousse and some ice cream would do nicely. 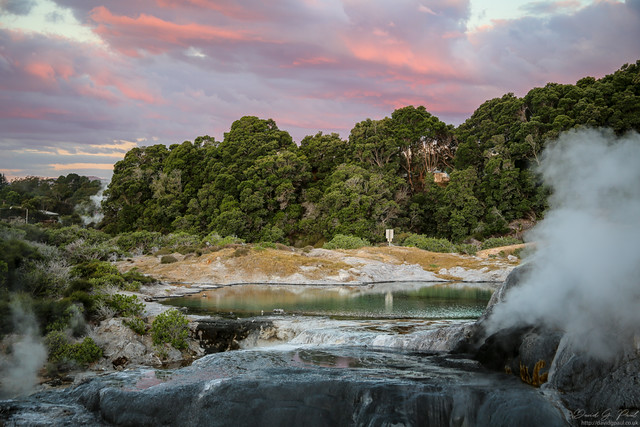 We’d finished eating by 20:10, and had a little time before sunset so myself and James hurried back to the geysers to try and get some photographs with a sunset in the background. Most sunrises and sunsets here hadn’t been great - and this was no exception.

It wasn’t quite dark when we got back to the hotel; but when James realised he’d need milk in the morning he headed out looking for a supermarket. It was about half a kilometre away, and by the time he got back I realised we’d left our granola behind in Thames. So not wanting to delay breakfast by my run in the morning, I headed out to buy some more. I also emailed the cottage we stayed at to make sure we hadn’t left anything else behind.