Sleeping in an old prison wasn’t as good as sleep during the previous night. For the first few hours I could hear people walking around on the metal walkways outside, and people opening, closing, and bolting their doors. I suppose it made the experience a little more authentic.

Fortunately it was a very short drive to the airport which meant we’d got plenty of time after dropping the car off to find somewhere for breakfast. Though first we had to deal with the baggage drop - at 9kg instead of 7kg my bag was too heavy for their cabin baggage policy. Unfortunately JetStar seem to be just about the only airline that weigh cabin baggage at check-in.

Since I was carrying camera gear there was nothing I could remove from my bag to put in my checked luggage - so he gave me a tag to show that my bag was heavy. I didn’t want them to know this when I reached the aircraft though, so was sure to make sure the tag wasn’t present. During this time we also saw the New Zealand cricket team dropping off their bags at the oversize baggage desk - each one had their own Air New Zealand rucksack with their initials on - a nice touch.

For breakfast I had a bacon roll, which wasn’t that filling - after having eaten lightly the day before. At least I wasn’t doing a long run today - even if I wanted to be. Security was then nice and quick, and just like in Queenstown it was okay to take our water bottles through still filled. However, once on the other side I realised I was missing my jumper - the only one I’d got with me, and would be needed at least when getting home.

I dashed back to the security gate and explained I’d left my jumper on the other side - they let me through so I went straight to the cafe, hoping it was there. I couldn’t see it, so asked - but they’d not seen anything and suggested I speak to someone who works for the airport. I found someone else and they told me to as at the information desk near security. As I approached the desk I saw my jumper on the side - a relief!

If weighing cabin baggage at checked baggage drop wasn’t enough, they then weighed it again at the gate. This time I removed my large lens, the book I was reading, my laptop, and my full water bottle and found this was enough to keep it under the 7kg limit. I wasn’t that discreet about it either, and then put it all back in after I’d got the baggage sticker.

The flight passed quickly whilst reading, and again we each had a NZ$10 food voucher to use. This time I got a ham and cheese toastie I’d decided to save for lunch later - with only 65 minutes for this flight there wasn’t that long between them cooking it and us landing so perhaps that decision was for the best.

In the domestic terminal for Auckland arrivals, locating the baggage claims was not that easy - unless you happen to be flying Air New Zealand. For JetStar theirs is hidden away near door 9, and isn’t signposted until you’re actually there.

Once our bags arrived I used the Go Rentals app to call the shuttle bus, and waited outside for it. A few minutes later it arrived and took us out of the airport to where they have their lot. This time we’d gone with a Toyota Corolla Hybrid which would hopefully use a little less fuel - we’d got a lot of driving to do over the next week. 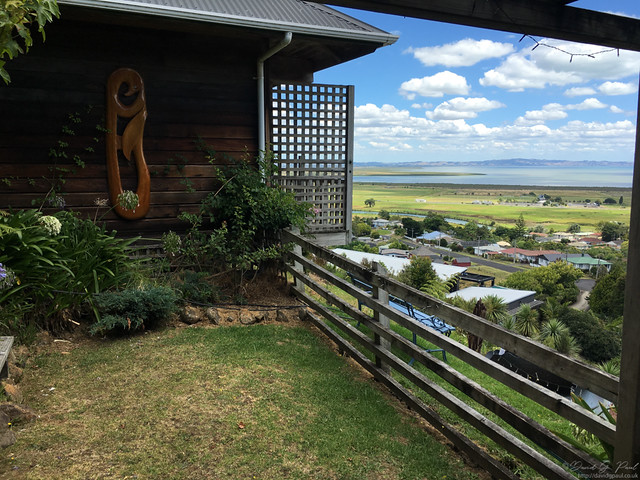 To start with, we headed across to the Coromandel Peninsula to a small town called Thames. We’d booked a small cottage there for the night, and had no idea it was on the side of a hilltop with amazing views across the Firth of Thames and Thames itself. It was 13:15 when we arrived so had lunch before heading out once more - this time to do a hike.

I drove for about thirty minutes to Karangahake Gorge where there is a reserve and a number of historic trails. Our first attempt wasn’t that successful - we couldn’t find the start of the trail to begin with and found ourselves wasting at least ten minutes.

We retraced our steps and crossed a suspension bridge that started to swing as more people began crossing it. Our intention had been to do a four hour hike, but when we got there we decided it wasn’t worth it - for starters the signage wasn’t great and we couldn’t see the start of it. Instead we decided we’d do the tunnel loop, and the windows walk - these together should hopefully take a couple of hours.

The tunnel loop starts along the Ohinemuri River and then crosses the Waitawheta River. Eventually it goes through an old railway tunnel that runs for about 1.1 kilometres before going straight onto a bridge over the road to where the Crown Battery site is located. These are all remnants of when the area was a flourishing mining town.

Our next trail, with detours, would show us a lot more of this. The first bit followed the river, first on one side then the other. On the other side there was an old water pipe that was rusty and broken; but it led to one of the mines. None of the building is there now, and you can see in where it looks like the ceiling has collapsed; but you can’t enter. I guess it’s been a long time since it’s been safe. 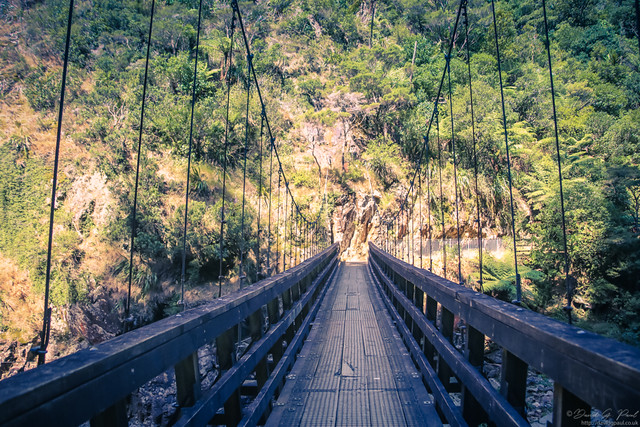 If we’d carried on along that path we’d have reached the summit of the mountain a few hours later, so turned back and began the windows walk - which starts with a number of stairs. The interest of this loop is to follow railroad tracks through tunnels. To start with you can see where you’re going, but soon you need a torch to be able to navigate. Neither of us had one with us, but we had our phones - that was just barely enough. 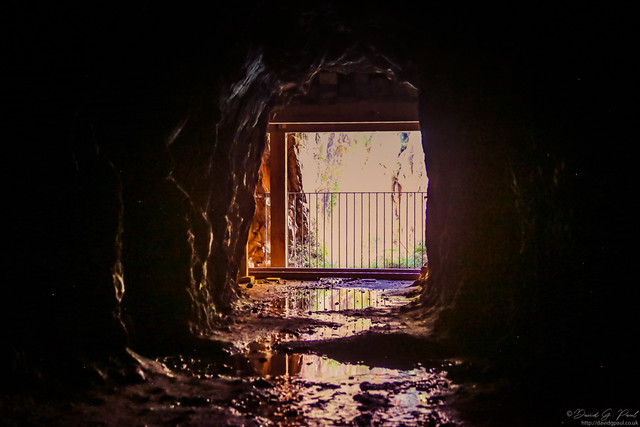 James took a detour off the main route once to where you can go deeper into the cave system, and was fortunate enough to find glowworms. With our phones turned off they started to light up on the ceilings - there may have been fewer of them, but here we could attempt to photograph them. I guess it’d have been easier if we’d had a tripod with us; but typically I’d left mine at the cottage.

Instead of heading deeper into the caves we turned around and headed out to complete the trail with one quick viewpoint. By the time we’d done these trails and the detours it’d taken a little under two hours. We’d still got a thirty minute drive back to Thames, and this time we drove through the town centre to look for somewhere selling sandwiches for the next day - we couldn’t find anywhere selling some.

The cottage had a swimming pool and a hot tub, so made use of both before heading out for food. The place we’d chosen seemed to be about the only place serving food - the first one we’d tried was not as the chef had broken his arm. The place we went with wasn’t too badly priced - I had a large chicken pizza with cranberries and was only just able to finish it. 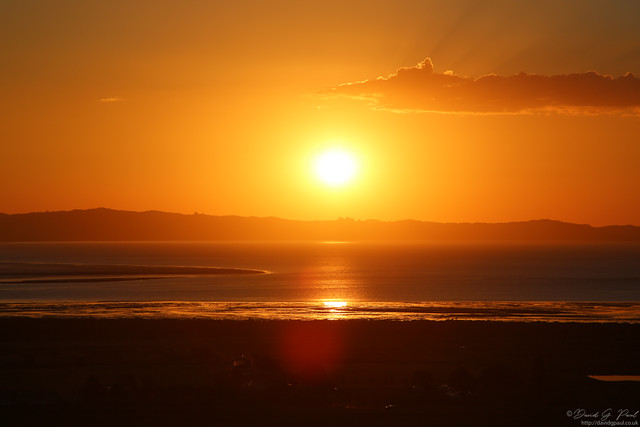 That evening I sat watching the sun go down over the Firth of Thames until the light was no more.