My day started with a run from the motel in Twizel to Ben Ohau which is where Peter Jackson filmed the battle of Pelennor for The Lord of the Rings. It wasn’t that hard to find either - once I got onto the main country road I just stuck to it until I ran out of road, at which point I knew to turn left.

After ten miles I returned to the motel for breakfast, whilst James called the helicopter company. The number we’d been given was incorrect, so he had to try again twenty minutes later when he’d got the right one. They thought it early for checking up on the weather, but if we didn’t leave then we wouldn’t have made it in time - even though it was only thirty minutes away with a brief photo stop for Lake Pukaki. This lake is a milky blue in hue to the colour of the meltwater that joins it from the Tasman Glacier. 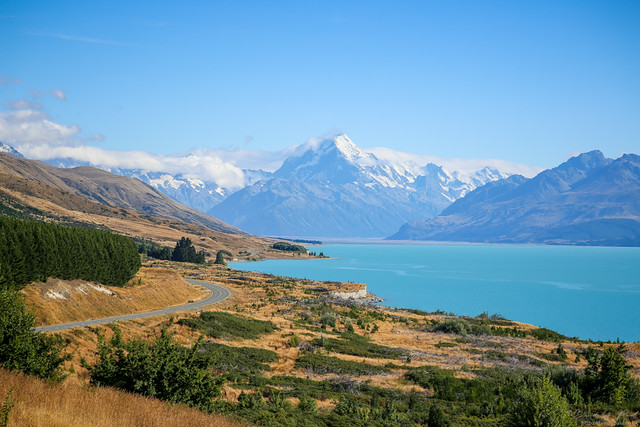 We left our luggage in the car, figuring it’d be safe, and took two cameras to check-in at Glentanner Park. Surprisingly we got a free upgrade to the Mountains High flight instead of their Alpine Explorer due to their booking numbers. What this meant was that instead of flying over Ben Ohau we’d fly over the Tasman Glacier and close to Mount Cook - we’d then land on the glacier as well and overall this would be five minutes longer. We knew we’d got forty minutes from touchdown to get to the Hermitage Hotel for our next tour and this just made it tighter.

During the safety briefing the lady was losing her patience with a Chinese group as they weren’t paying attention. Could she be sure they understood English though? It seemed unfair to assume. With this sort of thing you really need to listen though as you don’t want a hand or your head taking off by a rotor blade. Once sure we understood, a group of six were led to the first helicopter where we belted up and put on our headsets. Unfortunately I was in the middle away from the windows so photographs would be difficult. 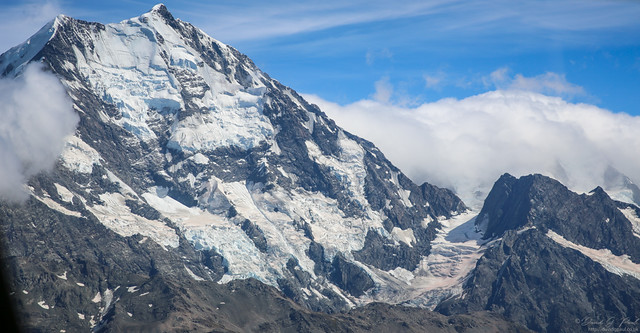 The pilot increased the throttle, and with a wobble the helicopter lifted up into the air and swung sideways into a turn that took us flying over where the glacier meltwater was reaching Lake Pukaki. During the ascent that followed there was some wobble due to the wind and this made the difficult task of photography even harder. Eventually I gave up and decided that maybe I could get photographs once we landed.

Again the helicopter was almost sideways before it touched down on the glacier as the snow crunched underneath the struts. We disembarked, and I rushed to take photographs though our view of Mount Cook was obscured by us being in a bit of a dip. As I tried to get closer another helicopter started to come in so I had to rush back to ours so I’d be out of the way. The downward force of it passing blew off my baseball cap that’s been to every country I have - so I had to chase after it. 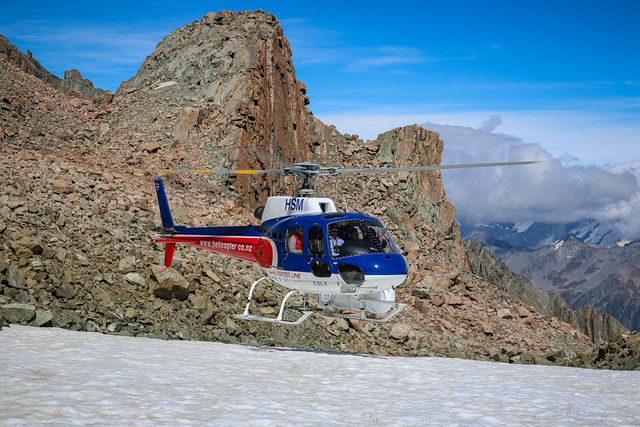 Back on the helicopter we finished the tour, and returned to Glentanner Park. From there we rushed onwards to the Mount Cook Village and the Hermitage Hotel; but got stuck behind slow moving traffic that gave us just five minutes spare once we arrived. This was all the time we had for eating lunch before needing to begin the Tasman Glacier explorer tour.

When we checked in for the tour we were asked for a mobile number. James explained his would be turned off for most of the week, so asked what they wanted it for.

“It’s in case we need to cancel the trip”

“But it’s in fifteen minutes? The coach is outside,” James exclaimed, sounding exasperated. They did not reply.

For this next tour we were taken on a stifling hot coach to a car park for the glacier. Many people park there to walk to the viewpoint, but we were heading in a different direction on a 1.5km hike to where some boats were moored. They handed life jackets out to everyone, and gave instructions for boarding the boats.

Me and James were the last to board one of the boats which meant our seats would be the wettest of them all - the ones against the engines. It was okay though, we were the only ones on that row which meant photography would be easier for us. 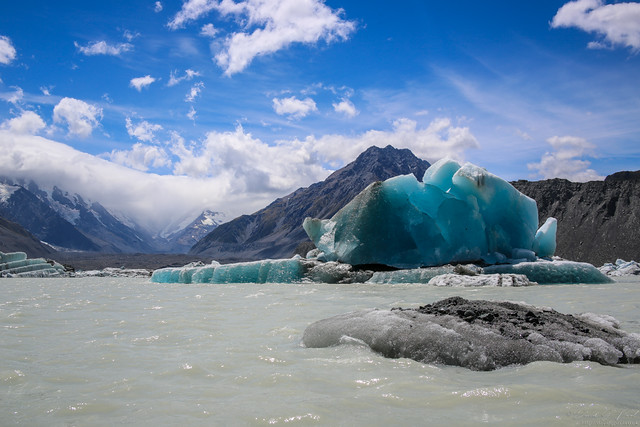 The boats sped across the lake with immense speed that caused spray all over the inside of the boat. When we stopped we’d reached some large icebergs that had broken off from the glacier a few days before and overnight the strong winds had shifted them to spread them out more. This was the largest breakaway they’d ever seen in the time they’d been doing the tours - and they knew that thirty five years ago the glacier had stretched all the way to the lake.

Global warming was undeniable here, whether caused by humans or not, the ice shelf was disappearing fast in both height and where it stretches to. It’s not uncommon for glaciers to recede and grow, but the speed at which it was here was alarming. They predicted that everything we could now see of the glacier would be gone in another thirty years.

Once this tour was over we’d got at least four hours on the road to get to Christchurch; but that wasn’t until thirty or so minutes had passed getting back to the Hermitage in order to collect our car from where we’d left it.

Our first stop was in Tekapo so we could photograph Lake Tekapo and the Church of the Good Shepherd. Both of these, and the statue of the sheep dog are things we’d seen on our previous trip; but I felt it a good idea to try and get better photographs this time, and maybe see if they’d changed at all. We’d already seen a lot of change in Queenstown, and I’m sure Te Anau had grown also. 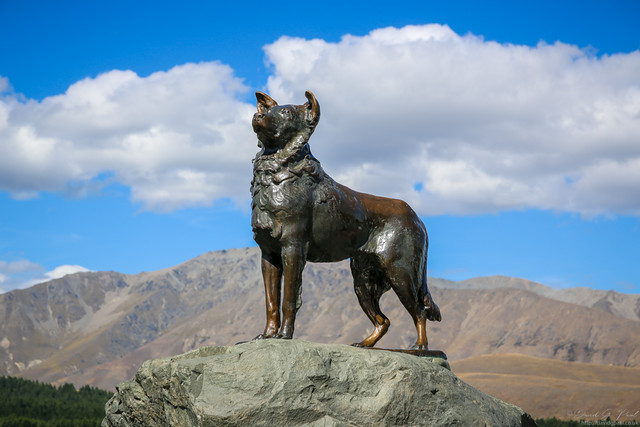 We only made one further stop after that to use the facilities, yet it was still 19:20 by the time we reached our accommodation in Christchurch. I felt tired, and sore for having driven for so long. We couldn’t really rest though as we needed to get our luggage moved into our cell and to then find somewhere to eat. The reason I thought of it more as a cell than a room was because we were staying in a historic prison that had been converted into a hostel. Each room had a heavy steel door, and two beds made to look like a prisoners uniform. 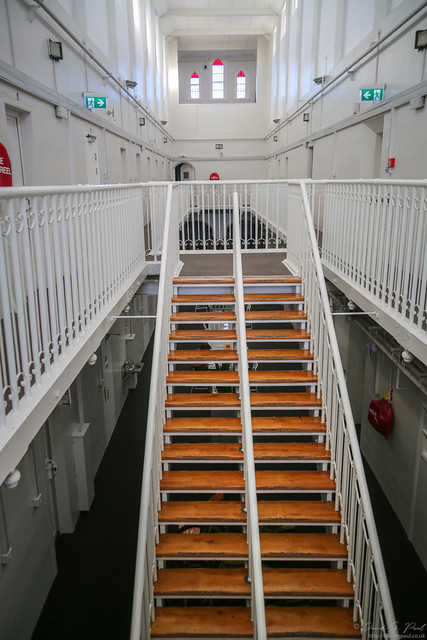 The corridor of the prison on both the lower and upper levels had been converted into communal areas - the best places for accessing the free Wi-Fi. Rather than linger and explore a little we headed straight out to get food; but found that there was only one choice really - a nearby pub. I had a BBQ pulled beef burger that came with fries - my first of this trip, though it wasn’t very filling. I found myself buying an ice cream from a newsagents as well.

Once back at the prison we realised we couldn’t use the showers as it being a hostel meant towels weren’t provided. Neither of us had brought them either. So, we packed for the flight ahead, and finally got some more sleep.