The engines roared to life at 06:15 to move us on to Hall Arm where we’d be doing a scenic cruise. I’d gotten up five minutes before to beat the bathroom rush as there were few facilities shared between around seventy-five passengers.

I sat in the saloon, hoping for a good sunrise but there was no colour to the sky this time. Whilst I’d been waiting they’d prepared both a continental and a cooked breakfast - this time I had bacon, sausage, barbecue beans and a hash brown along with a couple of pastries. It was certainly a filling breakfast - just a shame I’d not been able to go out for a run.

Just after I’d gotten my food we were alerted to a pod of dolphins that we’d encountered, so I put my plate down and rushed outside onto the deck. I knew I wouldn’t be able to get a photograph of them, but it’d have been nice to have seen them. All I could see were ripples where they were passing us. As there were a few spots of rain, I decided it best to head back inside to my breakfast. 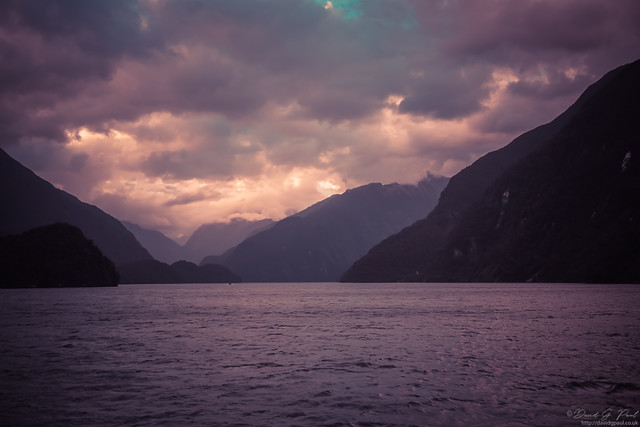 A while later we’d reached the end of the Hall Arm, and at this point they announced they’d be turning the engines and generators off for the next ten minutes. Everyone had to be silent: no moving, no talking, no using cameras. They wanted everyone to hear nothing but nature for this time. I could hear waterfalls, and bird calls - and a guy walking around using his camera. I was sure it lasted far more than ten minutes, though maybe that was just my perception of time.

From there we’d about thirty minutes back to where we’d started from yesterday, and two coaches were there waiting for the group. These took us back across the island to the hut we needed to wait in, sheltered from sand flies, for the catamaran back to the mainland. This was the last we’d see of the Fiordland this trip.

On the mainland we collected our luggage, and hopped onto the waiting coach that took us not to Queenstown, but to Te Anau. We’d got twenty minutes to get some food, but the driver wouldn’t allow us to leave our luggage on the coach so I waited with it whilst James went to get us some more pies. To make this easier I decided it best if I stuck with steak and pepper pie like I’d had on that first visit.

An hour into the drive from Te Anau to Queenstown there was a brief break in Athol for using the facilities of a highway cafe; though I used this as a chance to buy ice cream. Less than an hour later we were dropped off on the road not far from the airport so we could crossover and go looking for the car rentals place.

We couldn’t see it during our hike across the airport, so I used the free Wi-Fi at the terminal to request the airport shuttle. This took around fifteen minutes to arrive, and a further five minutes whilst other people joined us. Fortunately it was only a short drive - we’d passed the place on our way in.

As James’ driving license is Canadian it meant we had to check-in at the desk instead of using one of the automatic machines. We also decided it’d be a good idea to pre-purchase the fuel as they convinced us we’d make a saving. We’d soon see.

The car we’d got was a Toyota Corolla, and was just big enough to fit our suitcases and camera bags safely in the back. I think James was very dubious about us leaving luggage there when doing Mount Cook, but for once I assured him it’d be okay. The boot was secure and wouldn’t be a case of a criminal smashing glass to get at it. As long as we didn’t open the boot whilst there we’d be okay. 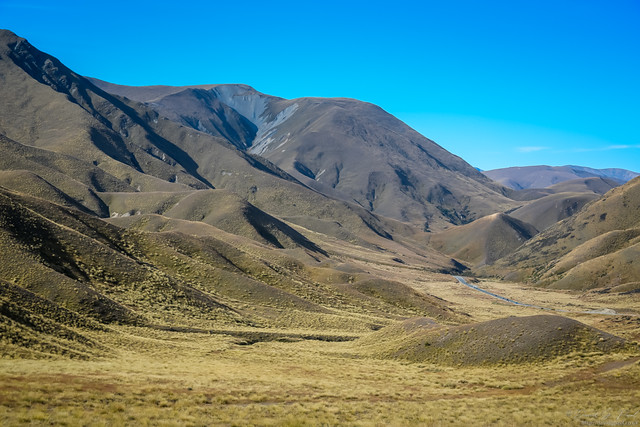 The drive was over two hours from Queenstown to Twizel, so I’d got plenty of time to get used to the automatic gears. We also stopped a few times for sights, such as the viewpoint for Lindis Pass. This was a place I’d seen nine years ago, but during that trip the coach didn’t stop - and carried on to Omarama. This time we stopped because we wanted to, and then didn’t stop in Omarama. This entire area had been used in filming The Lord of the Rings and The Hobbit - the mountains we could see in the distance had been the Misty Mountains.

The motel in Twizel consisted of interesting looking buildings that wouldn’t have been out of place on a Swiss mountain with severe apex roofs. Inside there was a bit of a kitchen - perfect for making breakfast, a downstairs bedroom I took, and then a bedroom upstairs with three beds. Plenty of space for James to use. 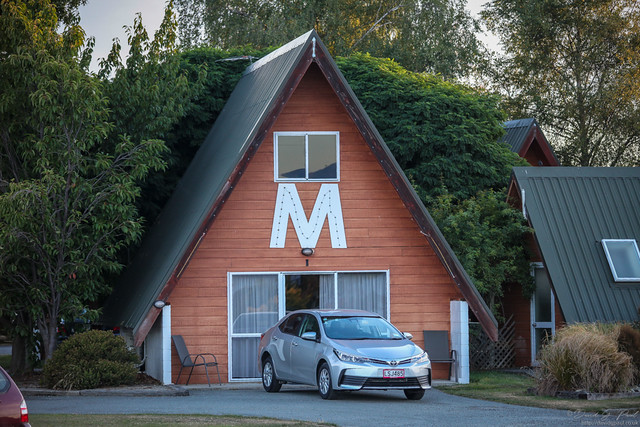 Since the motel wasn’t doing breakfast whilst the owner was away, we needed to get breakfast and lunch from the supermarket, and get it stored in the fridge before going for our evening meal. By the time we were seated at Poppie’s Cafe, and had food in front of us it was 20:00. The only thing on the menu I liked was the fillet steak - this came with carrots, broccoli, roast potatoes, and some sort of potato puree. It was expensive, but it’s what we’d expected for this area. The Mount Cook village would have been even worse. However, we did get our first glimpse of Mount Cook - something we didn’t have nine years ago.

The sun was now setting on another day - hopefully the morning would bring good enough weather for a helicopter flight.