The breakfast on this boat was served in two parts - at 06:45 we needed to be in the mess for a continental breakfast, or fifteen minutes later for a cooked breakfast. I’d had enough of cooked breakfasts so only stuck around for cereal and toast.

After getting my bags packed I was back out on deck, seeing what photographs I could take. It was windy though, and this made the Fiordland cold. A large cruise liner was on its way into the sound, ruining many possible photographs, but it didn’t seem as amazing as I was told it would be. Compared to places such as the Li River in China, it seemed fairly standard. Maybe I've seen too many places, and the order you see places in matters. If this trip hadn't been abandoned on the previous attempt before China, maybe it would have seemed more amazing. 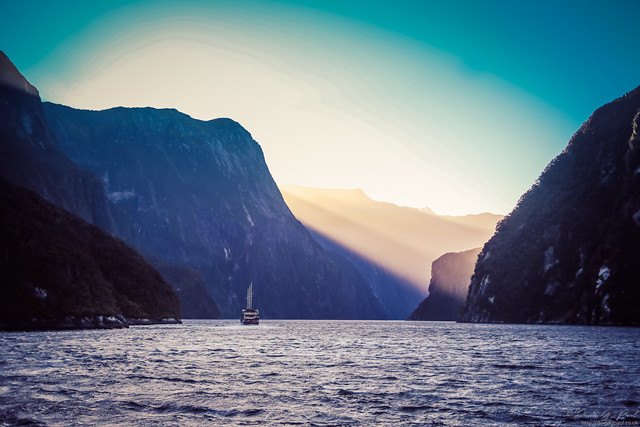 When the ship turned around at Saint Anne’s Point to head back this was when we realised just how windy it was - the spray crashed over the bow of the ship and covered the majority of the length of the Wanderer. It was definitely a time to be indoors until it had settled - it was hard work just standing in one place on deck. When the wind eased, we’d rounded the corner back into the Sound and the views certainly improved as rays of sunlight shone over the tops of mountains. 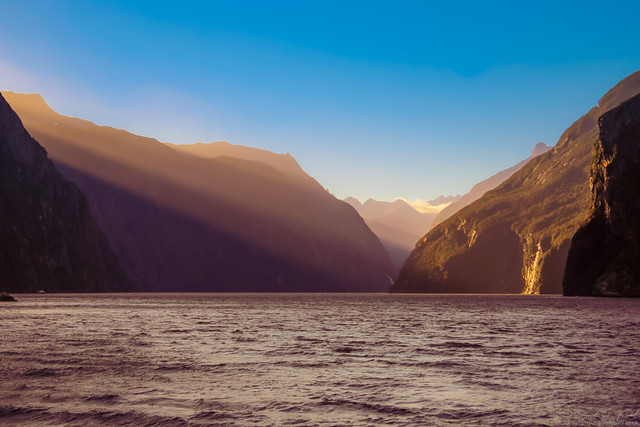 We arrived back at the terminal at 09:00, boarded the bus, and was on our way back to Te Anau. There was a stop just after the Milford tunnel, but this time there were no Kea about. We stopped again at Knob Flats, but only to allow people to use the facilities.

At 12:00 we were back in Te Anau, but the guide missed our hotel, so dropped us off at the Real Journeys visitor centre so we could be given a lift back to the hotel. Sadly they wouldn’t let us check-in two hours early so we dropped our bags there and headed out for lunch. Our plan was to visit the same pie shop as before to try a different pie.

For the next two hours we sat around the picnic area as there was very little to do there. If we’d been able to check-in I’d have been able to change into some running clothes and get a few miles in - but that was not possible. 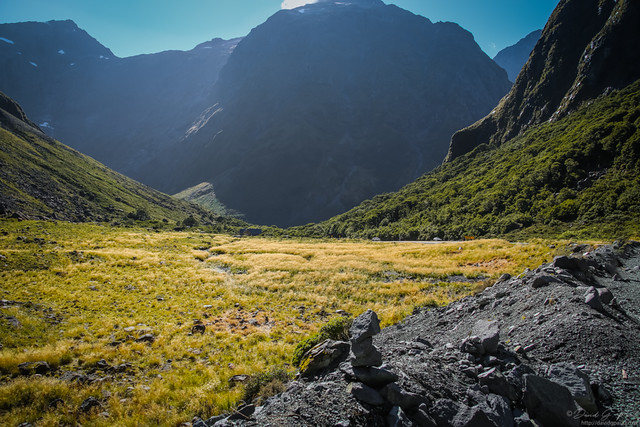 Once we had checked in we went over to the mini-golf and played that eighteen hole course for a while. It was the first time I’d played in eleven years - since that time in Ica, Peru. I’d certainly gotten worse since then, but did at least manage one hole-in-one.

Nearby in Lions Park they were celebrating Waitangi Day - a national holiday that celebrates the anniversary of the signing of the Treaty of Waitangi between the British and forty-five Māori chiefs. Here in Te Anau they were celebrating with live music. One driver we’d had earlier in the day had commented on troubles surrounding the day, and ridiculed their arguments saying that this celebration was a way to appease the indigenous population. I think he needed a bit more respect for them. 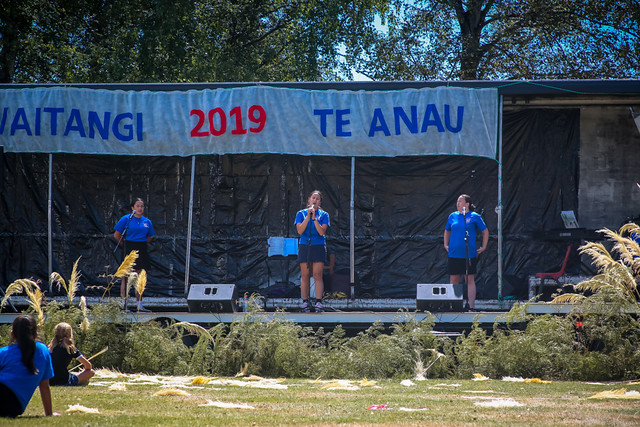 Another tour we’d pre-booked began at 16:30 with boarding a boat on Lake Te Anau. This took us on a thirty minute scenic tour, ending with landfall on the other side of the lake. We were led from there along a trail to some limestone caves which we would not be allowed to use cameras or other electronic devices inside - they’d affect what we were about to see.

It started with very low-hanging rocks that required us to crouch to get inside, but it eventually opened up with the metal walkway lifting us above the flow of water below. As we wandered around the caves it gradually got darker, but we had some stops to be shown the erosion taking place. Once far enough into the cave the lights were turned off, and above us we could see the glowing green of the glowworms that moved along the cave surface. 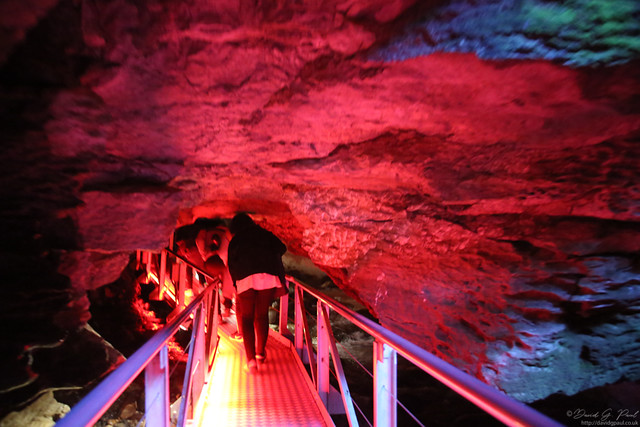 These glowworms are the larval stage of the fungus gnat. They spend all of this stage consuming insects and other glowworms as once they are an adult they will not eat - just mate. It was almost mesmerising to see nothing but these lights around us. I couldn’t see anything else either, and after it’d been going on for what seemed like a few minutes I’d wondered if the others had continued on without me as it was too dark to see anything.

Eventually the lights came back on and we boarded a boat that took us around more of the cave system, and got us closer to masses of glowworms. The guide took us around this in absolute darkness by pulling on a chain to move the boat around. 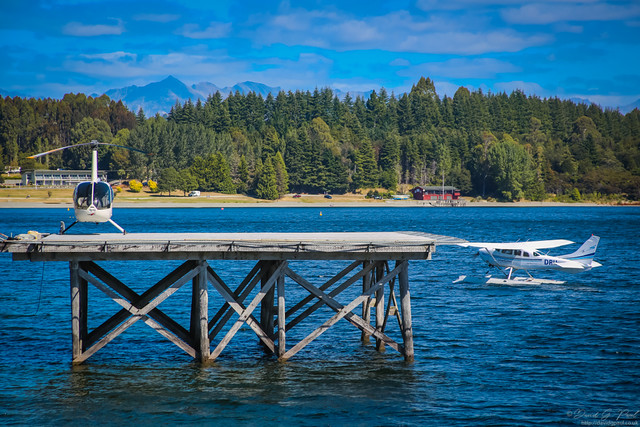 Once back outside we got to have a brief nature walk before attending a talk on the glowworms, and returning to the boat. Thirty minutes later we were back in Te Anau and looking for somewhere to eat. We decided on a pizza place as it was something simple and quick. I’d decided on “The Local” pizza which was mostly chicken and bacon, and had a slice of their homemade apple crumble pie to go with it.

Again, it was another night of needing to prepare for an overnight stay on a boat whilst our luggage would be stored in Manapōuri.