The room was located on the end of the building, so that when a garbage collection happened at 05:20 we could hear the noise quite clearly. Shortly after I decided to go for a five mile run around Lake Wakatipu, mostly following a trail through Queenstown Gardens.

For breakfast we’d got some granola we’d bought from town, which cost NZ$8.90 for a large packet - and I think that was actually a far better breakfast in every way than the one we’d had the day before in Auckland.

Fortunately it was a short walk with our luggage to the Real Journeys office where we boarded a coach bound for Milford Sound. Whilst we’d arrived early as they’d requested and wandered around outside first, there were some that arrived late. 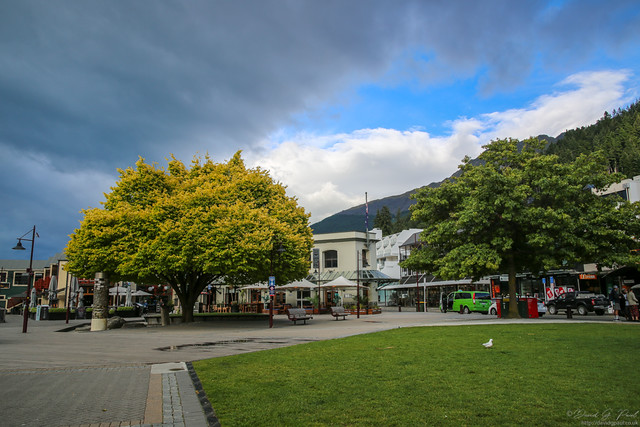 This first bit should have been familiar as it was the same route we’d taken nine years ago, the day after the thunderstorm that had felled a tree on the Milford road. This time, hopefully, we’d go beyond Te Anau. Hopefully we’d make it all the way to the Sound.

Our first stop was in Mossburn, but this was just a chance for people to use the facilities and to buy food or drink from the cafe. It wasn’t quite noon, and I knew there’d be another stop so I just spent the time browsing. There wasn’t really anything to photograph at this point, but I’d attempted to take the occasional picture from the window of the moving coach.

The next time we stopped was around 12:20, in Te Anau. This time the road was open, so everything was looking good. First, we’d got forty minutes to find somewhere for food. We went to Miles Better Pies, where I had a steak and pepper pie, and a sort of cake. It was good food, and hopefully filling enough to last me until our next meal around 19:00.

There wasn’t really much to see - we wandered down to Lake Te Anau afterwards, but it wasn’t as good as Lake Wakatipu in Queenstown. Whilst we’d been eating, the coach had its fan belt replaced - just we didn’t know that at this point. 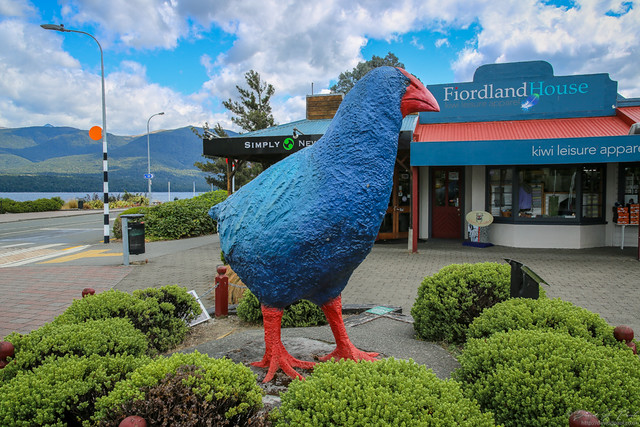 The second half of the journey included more stops than the first; though this time they were for viewpoints. We stopped amidst a field of tall yellow grass, with the sun shining through a gap in the mountains ahead. Eglinton Valley was picturesque, and very reminiscent of Lord of the Rings. I could imagine the riders of Rohan galloping through, or perhaps an unexpected party of dwarves and a hobbit on a quest to the Misty Mountains.

Of course this was real life, but you could see what had inspired Peter Jackson to use his home country. Mirror Lake was a little further down the road, but wasn’t as impressive. When there’s no wind these pools are perfectly reflective - though not the case on this day.

At 14:50 the bus started to beep, and the guide pulled into a parking space to find out what was wrong. It didn’t bode well; he turned off the engine and disappeared around the back. He spent a good ten minutes trying to figure out what was wrong, and with each passing minute it felt more and more likely that whilst we'd gotten further - we'd fallen short of our goal again. He then returned to the bus. It seemed whatever had gone wrong, it wasn’t something he could figure out. Things were not looking good - had we come this far, just to go this far? I think after our previous experience our concerns were warranted. 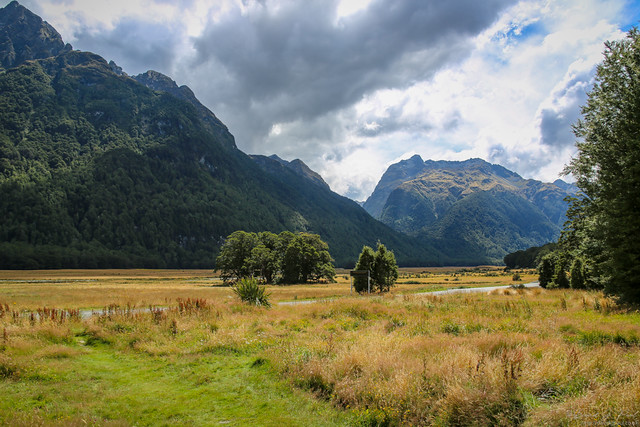 The driver decided to ignore the issue, and the beeping did however go away as we continued on to Monkey Creek. With a name like that you’d think it was named after the type of mammal, but it’s not. This creek is named after a dog called Monkey who was often found at this creek. There was a chance we could see Kea here, but we did not. We didn’t get to see this species of cunning bird until we reached the queue for the Milford Tunnel.

We saw two whilst waiting - one was on the roof of a car pulling at the rubber on a door, and another was waiting for an opportunity to jump into a car to steal things. I’d hoped they’d come closer, but we had to get moving once the light turned green.

This tunnel had taken five years to complete, but had only taken that long due to the second world war. If it hadn’t been for that, Milford Sound would have been opened to tourism sooner. We saw Keas flying through the air, following us as we took the switchbacks down through the valley to Milford Sound. The start of this was surrounded in clouds as soon as we exited the tunnel. 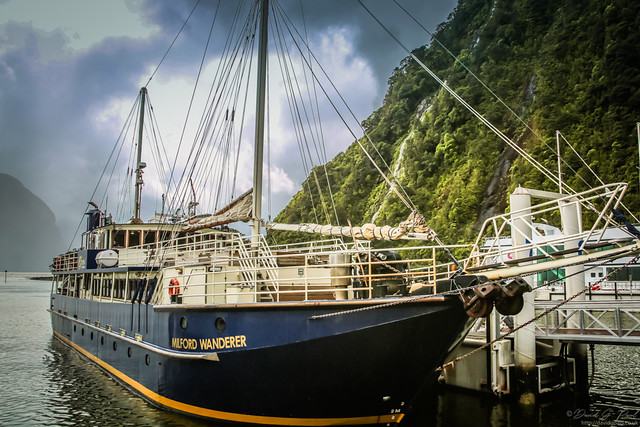 The coach parked up, and we headed inside to get our boarding passes for the Milford Wanderer. They started serving spinach and potato soup pretty quickly whilst the ship started its journey out of Fresh Water Basin. The soup was very green, with little bits in it. You could be fooled into thinking it was vomit containing stomach acids, but it actually tasted quite nice - it reminded me a little of potato and leek soup I’d had on the Antarctic voyage.

Once we’d arrived at the Deep Water Basin we took tender boats to Sandfly Point so we could walk some of the Milford Track. This is a track that could take four days to hike the full thirty three miles from Te Anau Downs, so of course we’d only be walking a very small portion of it in the ninety minutes we had. I couldn’t help but wonder how long it’d take to run it since it was around fifty kilometres. Would I have been able to complete it less than a day?

Of course though, when we came ashore we found out why it was called Sandfly Point - swarms of these biting insects were everywhere. Even the insect repellent didn’t seem to work - perhaps they couldn’t read to know what it was we’d used and that they were supposed to stay away.

Along the trail we saw a few waterfalls, and a few stoat traps. I even got to test one of them using a stick so we could see how this invasive species would be killed swiftly once in the trap. Most of the hike wasn’t that impressive though - it could have been one of many countries I’d visited without being any better or worse. There wasn’t anything to distinguish it, not really; but many of the trees were covered in a type of moss due to Milford Sound getting around seven metres of rain each year. 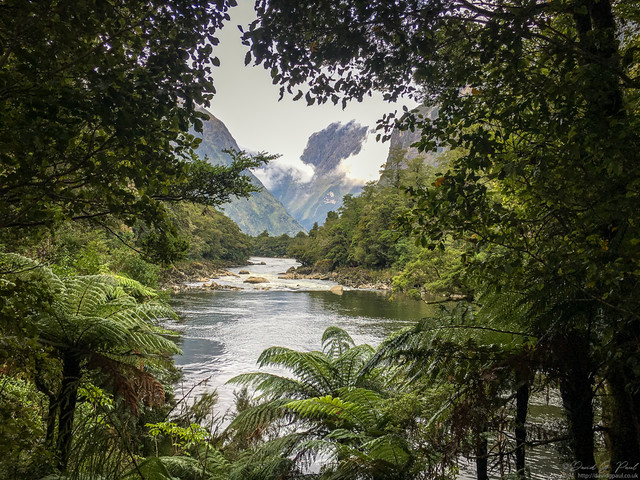 When we returned to the Milford Wanderer we were served the main course: a mixed grill of pork, lamb, chicken, roast potato, and kumara in red wine sauce with vegetables and salad. This was great, but the dessert was even better - apple and berry crumble with ice cream, strawberries, and blueberries.

In the meantime they’d started a short cruise around Milford Sound, and on the approach to Harrisons Cove where we’d be moored for the night, they took us extremely close to a cascading waterfall which was coming down with such force there was a fine spray blasting across the water and soaking us on the boat. The closer we got, of course the wetter we got - and we got to the point of almost touching it.

When we moored up there was the option of jumping into this water - it was apparently 16℃, but only two crew members jumped in. This brought the day to an end - the boat was calm, and once the main generator was off hopefully it’d be quiet too.