I’d not done too badly at falling asleep after a long day of walking; but found myself awake before 05:00. A few hours later I went for breakfast at the hotel, going for the ‘Kiwi big breakfast’ option, which was pretty much the same as a full English breakfast, but was swimming in a pool of grease. It wasn’t that appetising for NZ$15.

Eating at the hotel did however mean we’d got a little over an hour afterwards to get ready for being picked up to be taken to the airport yet again - it was time to head over to the south island to begin our pre-booked tours.

At the check-in they actually took the time to weigh any wheeled cabin baggage, but didn’t bother with backpacks. Fortunate. Security was nice and easy as well, and they actually let us take our water through so there was no need to get rid of it.

Once through security the choices for buying lunch from were minimal - just a newsagents, whereas before security they have quite a few places. As we only needed a sandwich, a newsagent was fine - I bought a croissant and a caramel cake for around NZ$10. I’d eaten them by the time we boarded, which was fortunate as it gave them time to digest before finding out we’d got a $10 food voucher to use on board. So, I also had a salted caramel and apple muffin along with a cold drink.

Whilst reading a novel, the flight passed quickly - though I was irritated by the passenger next to me constantly encroaching on my space. I found myself having to lean over into the aisle to avoid it. I was the first one off this flight, which I think was a first, but had to wait quite some time for my luggage to arrive as you'd expect.

Once it did we took a NZ$10 bus to the motel, and dropped our bags off there. I thought this room was actually better than the one in Auckland - there was a kitchen that we could use for making our own breakfast in the morning. The challenge though was finding something to eat. 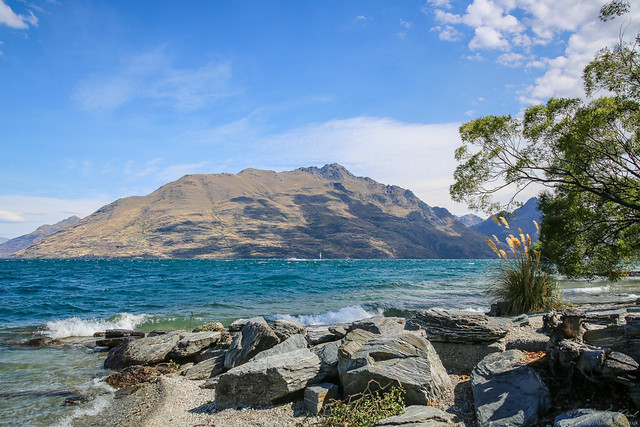 As we walked along Lake Wakatipu into town it become very apparent that the town had changed a lot in the nine years since our last visit. They’d capitalised on the tourism of the town a lot, and it has prospered. Sure everything there in the previous trip was geared towards backpackers and tourists; but now there was just so much more of it. They now had green spaces for people to sit around, and the area around Steamer Wharf had been tidied up significantly.

There were areas I recognised, such as a block-paved streets with a few gift shops along it - I even recognised the building we’d eaten in last time. It’d changed since then, and was now a more expensive restaurant. Our plan for food, after buying breakfast from the supermarket, was to eat at the Public Kitchen and Bar. It was the closest to the hotel, and the prices seemed reasonable. 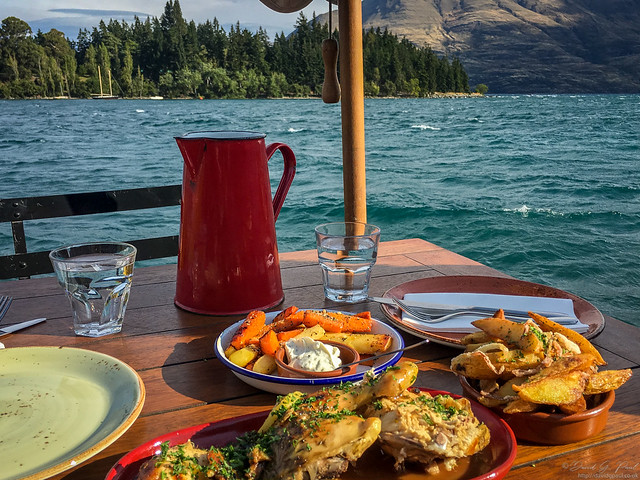 This restaurant was one where you order several sharing plates and have what you want of them. We ordered a chicken with lemon and thyme, roast parsnips and carrots, and roast potatoes with shallots. This was an incredibly tasty meal, and being on the decking around the lake made it a scenic one too.

Whilst we waited an old steamer, the Earnslaw left the pier. Shortly after the wind started to pick-up to the point of it causing waves to splash. This was causing the temperature to drop too, so once we’d eaten we headed back to the motel with some haste. It was forecast to rain overnight just like the last time we were here, but I hoped it wouldn’t rain in Milford Sound. First we needed to pack an overnight bag - most our luggage would be staying on the coach tomorrow.