Even though I hadn’t gotten into the hotel until just before 01:00, I was awake every hour or two until I decided to have breakfast at 05:30. I’d brought my own cereal with me, and the room provided tea bags, and a kettle so it was simple and easy.

James, a friend from Canada I'd be travelling with for this trip, wouldn’t be landing in Auckland until almost 10:00, so I decided I should aim to start my 18 mile run around 08:00 as that’d give me close to three hours to get it done - even though in previous weeks it’d taken just over two. Lack of sleep can affect running a lot, as could the increase in temperature - it was already around 20℃. I’d got no idea where I’d run, but I figured even if I had to do laps of the local area it’d do. 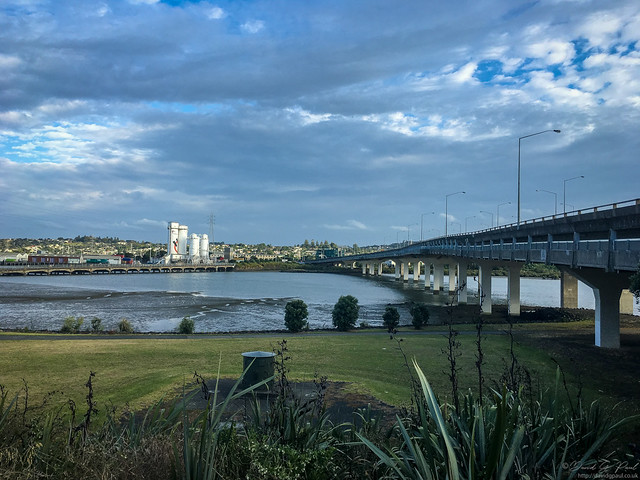 I wasn’t sure where I was going, but thought the direction was that of the Mangere Bridge. There were features of the road that gave me the impression it was the right way; but I wasn’t certain until I saw it around two miles into the run.

When I’d seen the bridge on Google Maps I wasn’t sure if it was crossable for pedestrians; but when I got there I found there’s a ramp that leads onto a footpath underneath the road. On the other side you can go one of two ways, and of course my first choice was the direction that would eventually run out of pavement after half a mile when it reached the western motorway.

I turned around and headed in the opposite direction, and eventually found myself on a long gradual incline that led towards One Tree Hill. The sun was beating down on me with no shade in sight, so I started to occasionally walk to keep cool as I didn’t have any water with me.

At the top of this street I entered Cornwall Park, and wondered if this wasn’t the place I thought it was. The path through this wound considerably; but eventually reached a sign which indicated the volcanic peak was in fact Maungakiekie - One Tree Hill. This last bit was steeper, but worth the climb - from there I could see Auckland in every direction, and the Māori memorial obelisk at the top.

The descent was far faster, and I recorded my fastest ever half mile during this; but left the park using a different exit. This took me across a different part of Auckland and away from the bridge I needed - it did however help to increase my mileage. By the time I’d reached the hotel once more I’d done 16.5 miles of the planned 18 miles, and left it there.

I calculated I’d got around forty minutes until James would arrive so quickly had a shower, and began sorting through what few photographs I’d taken on my run. As I was getting ready to meet him in the lobby, he knocked on the room door - having arrived exactly on the hour.

After James had gotten himself sorted we booked an Uber to get to the Sky Tower - it was actually half the price of what a bus would have been and was less complicated. 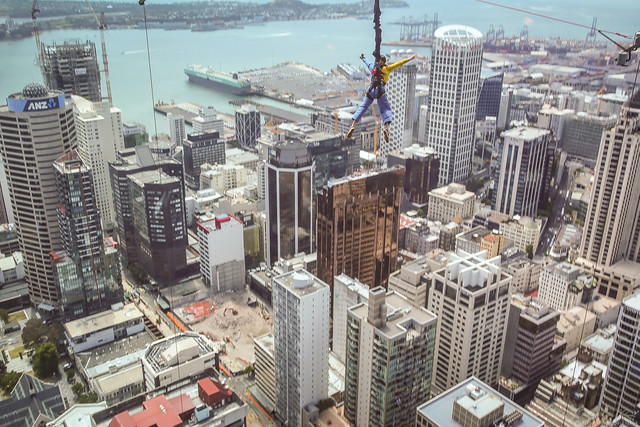 Going up the Sky Tower was NZ$29 per person which allows you to go to the main observation deck, the Sky Cafe, and the SkyDeck. The latter of these had the best view, and was the least crowded, and the cleanest glass for photographing through. The lift up was one where you could see out as you were going up; though we later realised that you could also see through the glass floor as well.

From the main observation deck we could watch people doing a SkyJump off the tower and onto a crash mat below. It looked a little like a bungee jump, but wasn’t really as cables kept their descent slow. I presume for safety.

This level also had a number of glass sections of flooring where you could look down through 36mm glass panels as you stand on them. Some of the other tourists were definitely cautious of these, despite the signs saying it’s as strong as the concrete. How strong was the concrete though?

It was almost 13:00, so we decided that before seeing any more we’d get some lunch. The first place we found was a Subway where the choices were very different to what we’d see in the UK and Canada, such as the falafel sub. The chipotle steak melt was at least fairly similar to the steak and cheese subs back home.

We sat in Albert Park to have lunch, ensuring we were taking our time as we’d decided we’d walk from there to One Tree Hill, and perhaps back to the hotel. I knew it was about three or four miles to the hill, and about three miles from there. 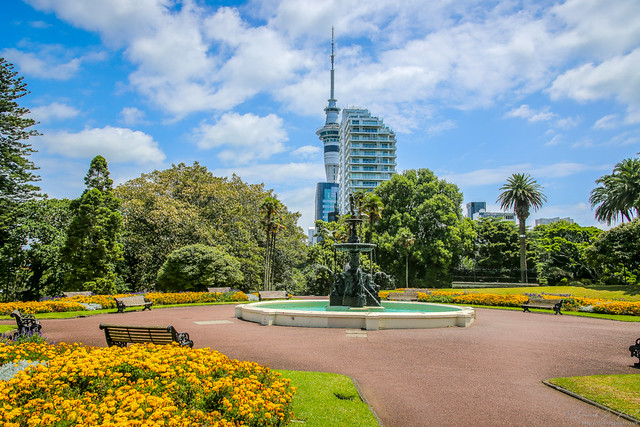 Before we set off we photographed the University of Auckland clocktower, and then trusted in my navigation. We stopped a couple of times to sit on benches, and one of these just happened to be outside the hotel we’d be staying in for the final day of this trip. However, at some point along the way I’d stopped looking at the green space that was One Tree Hill and had started looking at Mount Eden without having realised it.

What this meant was that we’d started to veer of course, and begun climbing a different volcanic hill. It wasn’t a complete loss though - by reaching that summit we could look down into the old crater there, and get our bearings for where we’d need to walk next. All this walking would be good practice for the Tongariro crossing.

It seemed like the miles ticked by slowly and it seemed further than what we’d anticipated. I guess in reality it was as we’d had that small diversion and an unexpected hill to climb; but we did eventually make it to Cornwall Park. 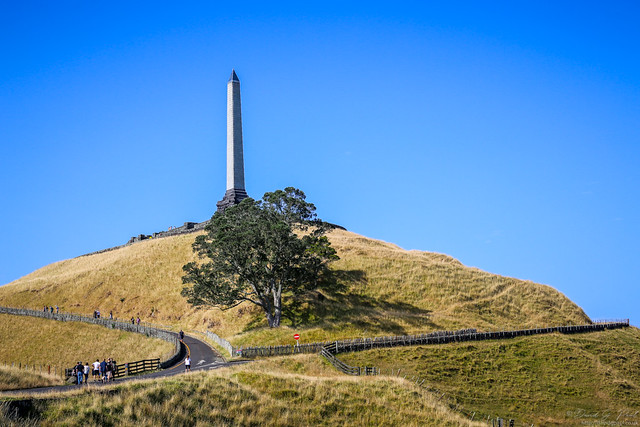 The climb was far shorter from this side than it had been when I’d visited during my run, and we found more photographic opportunities as well. Fortunately the sun was far enough round that we could also photograph the memorial on the peak without the sun interfering. It looked a long way back to the hotel, though I knew how far it was from earlier.

It had already been a long walk, but from the bottom of the hill we still had around three more miles to walk to get back to the hotel. We’d gone through a lot of water as well, having bought two 750ml bottles whilst walking on top of what we’d had with our lunch. Due to my earlier run I could at least navigate our way back to the hotel without the use of a map.

When we reached Mangere Bridge we began keeping an eye out for somewhere to eat, and came across Coronation Restaurant and Cafe. Their menu was surprisingly good, and their special of spaghetti and meatballs sounded perfect. In fact, we both went for the same option and found it to be delivered quickly. Paying wasn’t as quick though as they hadn’t told us we needed to queue to pay afterwards.

Having sat down for all that time did not make the remaining two miles that pleasant, but we eventually made it back to the hotel around fifteen minutes before sunset. I for one, was ready to relax and sleep.