It’s nice to explore a little of cities by running around them ahead of walking around with my DSLR. In Geneva that would have been ideal if it hadn’t have been for it being winter - it was dark for my entire run. I got up at 06:25 thinking that’d be early enough to get ready, get four miles done, and shower before breakfast.

When I left the hotel I didn’t start my watch straight away - the tall buildings made it hard to get a GPS signal until I was closer to the waterfront. It was cold too, so didn’t want to leave it too long before starting the run - but I also needed it to be slow. With needing to cross roads occasionally it made it slower than normal anyway due to losing any rhythm. I ran north as far as the top of the botanical gardens, and then back south and across the bridge to the Jet D’eau. Even when I got back to the hotel the sun was a while off rising. 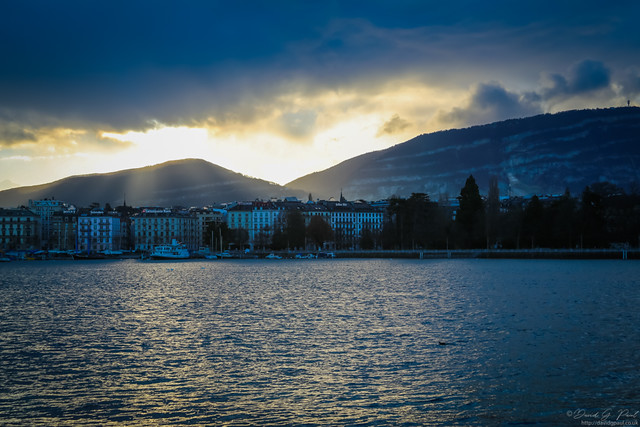 The breakfast wasn’t that bad - it was fairly typical for European breakfasts, but plentiful enough to recover from my run and prepare for the day ahead. Our first stop was the Brunswick Monument which we’d seen the night before, and from there we wandered across a bridge to Molard Tower. This one was a nice Swiss looking structure which is hidden away in a shopping area. I knew the rough direction it was in so hadn’t even needed to use a map. It seemed things had improved after years of travel. 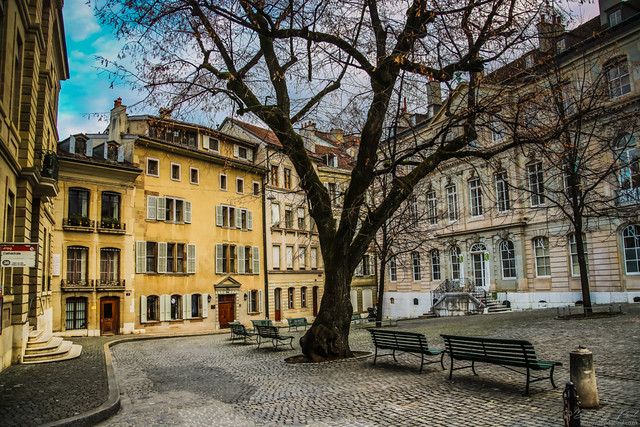 This theme of not needing a map continued as we stumbled upon Saint Pierre’s Cathedral at the top of the hill. It was twenty minutes too early, so we walked around the back and down some stairs to Place du Bourg-de-Four. This area is the old town of Geneva, though the only particularly old buildings we saw were the Lutheran church, and the Palais de Justice. This was an area we could explore in more detail at a later time. 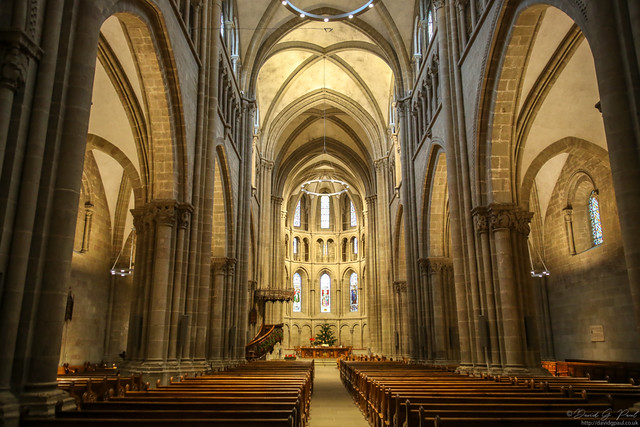 Back at the cathedral it was now time to open, and we were the first ones inside. We got the photographs we wanted done quickly, and then bought a ticket from the desk that would give us access to the towers and a number of other sights for 18 CHF.

The winding staircase up the tower was far better than any of the ones I’d climbed in Croatia. This one had solid stone steps like you’d expect to see in a British church. At the top of the first flight was a room with a wooden floor and beams crisscrossed throughout. 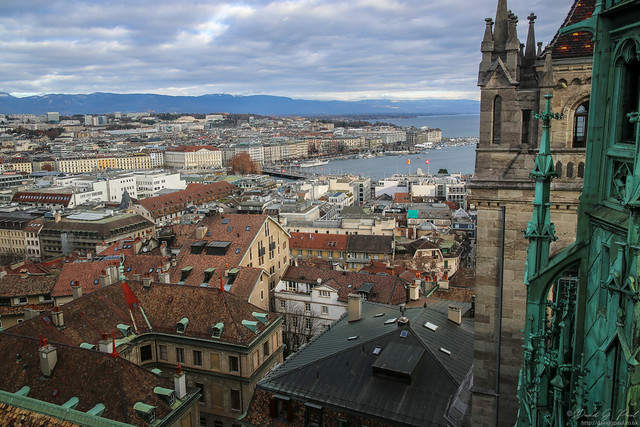 The door nearest to us has another spiral staircase that led up to narrow passageway outside, alongside the bells. James was feeling uneasy from the height, but this wasn’t the top - there was another spiral staircase to reach one final room at the top of the south tower. This room did have some steps up to a hatch, but it was closed. We could however look out of windows on all sides of the tower to look over the sprawling city around us. One window didn’t look out into the city - it looked into an old wooden WC.

The descent has a traffic light system so that you don’t meet people coming up - however I found that some had ignored the lights and were heading up anyway. So it took me two attempts to get back down to that first room. On the other side of this was a cavernous corridor that led across the cathedral to the north tower.

The north tower was a shorter climb, but you could go around more of the area where the bells were located. This brought our tour of the cathedral to an end, but on our way out we spotted the Chapel of the Maccabees - a small chapel near the entrance. It wasn’t particularly special, but I did like the decorative panels.

Down some stairs at the side of the cathedral entrance was the entrance to the archaeological site. This was an audio guided tour of excavated ruins from earlier iterations of the cathedral and a few artefacts they found. Some of this was clearly Roman, but they’d found evidence of settlements going back further.

The third place on our ticket was the Museum of the Reformation. This was nextdoor to the cathedral, but a museum I found incredibly boring. It was a portion of history I didn’t have that much interest in.

Since we felt we’d finished, and because the Jet D’Eau was turned off due to the strong, cold winds, we headed back to the hotel to eat our lunch in the warmth. This was food we’d bought in Heathrow along with water we’d bought the night before. It was also a chance for me to grab my coat as a fleece was not enough with the windchill.

Early into the afternoon we then walked north in the direction of the United Nations Office of Geneva. Perhaps we couldn’t get a tour of the building, but hopefully we’d be able to get a photograph. 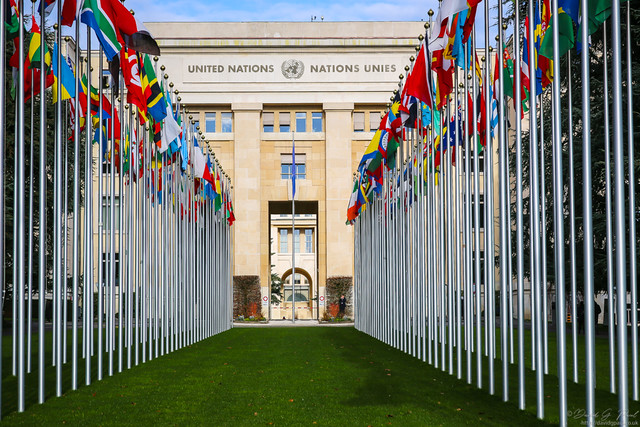 When I’d run near the UN building in the morning it’d have been a two mile route - but I’d seen it was possible to take a shorter route. This gave us a little more time, but all we could do was take photographs from the gate of the avenue of flags. We spotted a few key flags such as the Union Jack, and the Canadian flag and then crossed the road to a piece of art we could photograph - the Broken Chair.

The chair is massive, and at the time we were there a group of protestors were crowded around. They were holding board calling for an end to murders in Blue Nile - a Sudanese state. What murders these were, I couldn’t say.

As the botanical gardens were adjacent to the UN, we had a look around them - starting with the greenhouses. These were incredibly warm and humid, and required us to sit inside for around fifteen minutes for our cameras to demist after entering. They weren’t the best we’d seen - nothing like the one in Berlin. The trees in the first one were fake - hollow frames with bark affixed to piping. In one case it was done like this to hide stairs up into the roof of the greenhouse.

Other areas of these gardens included a Chinese Garden, and an animal park. There weren’t that many animals about - the most notable were flamingos, mandarin ducks, and black swans. This brought our tour of sights we'd planned to an end so we decided we’d wander back to the hotel along the waterfront. 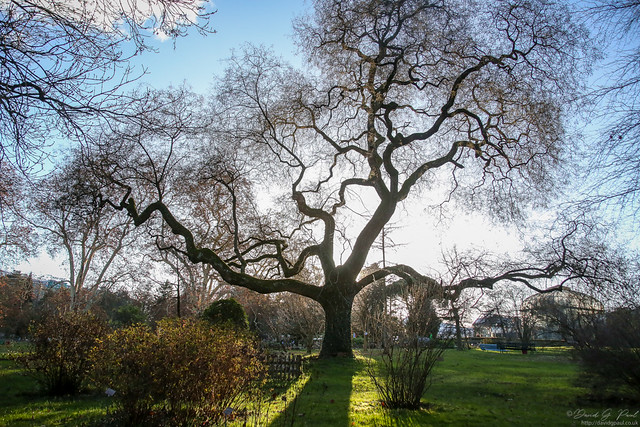 The water was fast moving - we could see the water ripple as it passed us at speed. Ahead it was crashing against the rocks along a small jetty. James thought he’d risk running to the end of it to get a photograph - but still got wet when more waves crashed over. 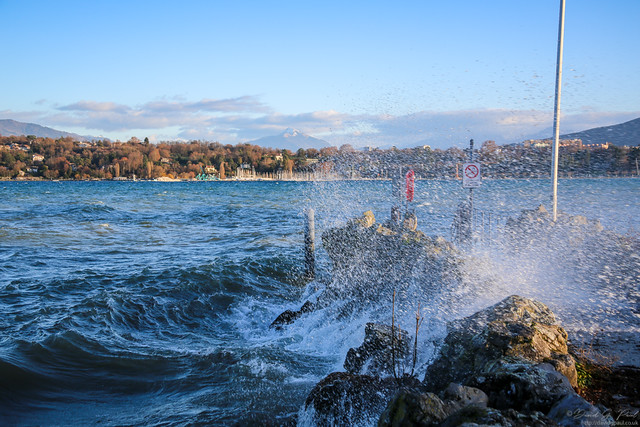 After dropping our things off at the hotel, we hung around until after dark before getting an evening meal. We headed back to the pizzeria we’d seen the night before and walked inside. There were no lights on, but we could see some people in the back room. It looked like they were open, but not yet ready for business. They asked us to take a table, as they turned on the rest of the lights.

The prices in this restaurant weren’t that much more than Burger King. I could get a pizza for 19 - 32 CHF, but was I noticed a lasagna for 21 CHF I thought that might be a nice idea. When I got it I think it’d have been better if I’d gone for the pizza - it wasn’t that big, and was lacking in meat. Hopefully our meals in Zurich wouldn’t be too bad - we’d saved a reasonable amount so far in Geneva.