It had gotten colder over night, and the temperature had plummeted to a chilling sub-zero level, with the windchill making it even worse. I was starting to regret only having shorts for running in, but I needed to get a tempo run done for marathon training. Perhaps some fast running would keep me warm enough to not notice eventually.

I’d considered running to France and back as it wasn’t that far away - but having checked this out the night before I couldn’t find a route that would be safe for pedestrians. I guess they don’t often get people wanting to run across the border, legally. It would however have been something unusual and fun to have done - maybe if I find myself back in Geneva one day it'd be worth doing during the daytime when I can be surer of where I'm going.

The GPS signal was not great this morning, and it couldn’t pick me up until I was near the waterfront; but even then it didn’t seem to be completely accurate. It was showing my current pace at 6:01/mi which was better than I wanted - but when I’d finished it gave me an average a minute slower. I could see from the map the route I’d roughly taken along the waterfront - but in places it had become a straight line where it’d lost a signal and then picked it back up again. I guess running into the wind would have been good training anyway; but it felt awful with how cold it was. 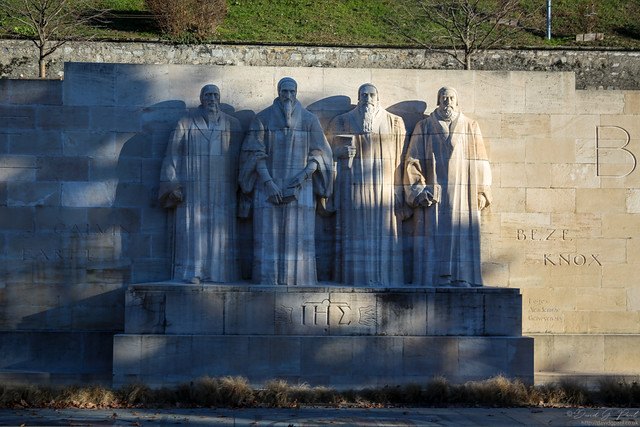 After breakfast and packing, it was our final time looking around Geneva - our intention was to explore some more of the old town. We headed in the same direction as the previous morning, but this time deliberately taking different turns until we reached Place du Bourg-de-Four again. This time we continued straight on and up a hill in search of Bastion Park - we knew this was where the Reformation Monument was located. 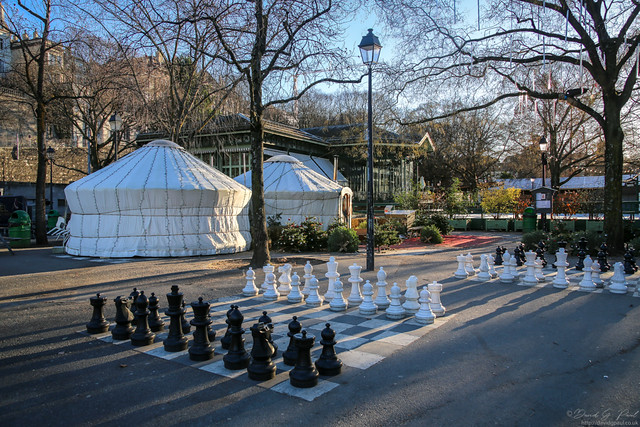 The park had been host to a German market over Christmas, and when we were there they were in the process of disassembling the wooden buildings that had been used for it. On the far end of the park are a number of giant chess boards. We played one game, but the cold made it more and more difficult. Without gloves my hands had turned red, and were going numb. For the sake of getting moving again we decided to call it a stalemate.

We soon found a shop we could look around, and in doing so warm ourselves. If anything it was a chance to see what sort of price it’d have been to make our own sandwiches instead of getting pre-made ones, and to compare prices to back home. I considered buying some Swiss chocolate to take back home.

Continuing on around the twisting streets of the old town we eventually made it back down to the shopping area, and the bridge that would take us back to the hotel. The wind was still fierce, so although our time in Geneva was coming to an end it was a relief we’d be leaving the wind behind.

On checkout of the hotel they charged for the second night - which we’d originally thought they’d done on check-in.The train station was a cold place to be waiting, but we did find a glass room on the platform that would keep us out the wind. 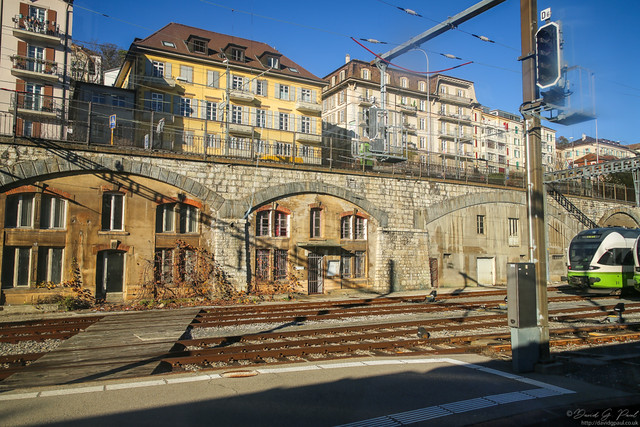 When the train arrived we found somewhere to sit, and stowed our luggage away. It’d be almost three hours until we’d be in Zürich so it was time to get comfortable. As we’d booked tickets online we had to show ID when showing our tickets - my passport was packed away, but a driving license was good enough.

I watched the styles of buildings change as we passed by alpine towns with Swiss chalet style buildings until we reached more industrial towns that had concrete high rises, and manufacturing plants.

At the train station in Zürich we turned the wrong way out the station and found us needing to walk about an extra mile in order to reach the hotel. This one was a little smaller than the one in Geneva, and had fewer usable power sockets.

After dropping our bags off, the sun had set and we went exploring the nearby areas to find a suitable restaurant for the evening. We passed cars covered in snow - clear evidence that although no snow had been forecast, some had fallen and we may yet see more.

We saw some Christmas lights still up around the shopping areas, but found nothing better than the pizzeria we’d passed early on. We headed back there, and I ordered a Hawaiian pizza for 21 CHF - the equivalent of around £17. It was a big pizza, but not big enough to warrant the price tag - the Swiss food prices had struck again.

The journey back to the hotel was a little longer than expected too as we managed to take a wrong turn again - a different one to before. At least in making the mistakes in this first afternoon we’d be less likely to make them on our final full day in Switzerland.