Since we didn’t need to get from one place to another, the four mile morning hike was optional. The three of us left the Kasbah with Hassan, and Howard would meet up with us at the end of our trek.

When we reached the road, as I didn’t have a heavy camera backpack on me, I decided I’d run up the road. I got so far before being called back as I was going to miss the turn we needed to take. I’d hoped to complete the Strava segment I’d been told about, but didn’t have the chance. 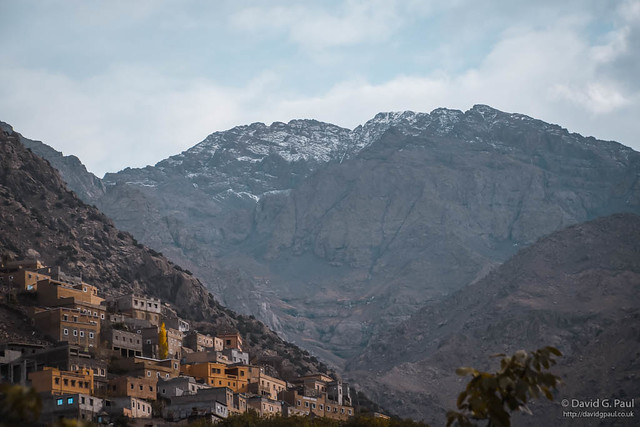 We walked at a leisurely pace up the mountain. The path wasn’t that steep, nor that long. At the summit we stopped for photographs, and Hassan helped us get a group photo. He then encouraged us to take photographs jumping into the air; but I don’t think it went quite the way he’d hoped – the camera was taking too long to take the photo.

The return journey to the Kasbah was a little longer, and we passed what we were told was once a volcano. Looking up at the mountainside I could see the curvature of the crater, and what looked like damage from an explosive eruption. It seems this was an old stratovolcano known as Jbel Sirwa. 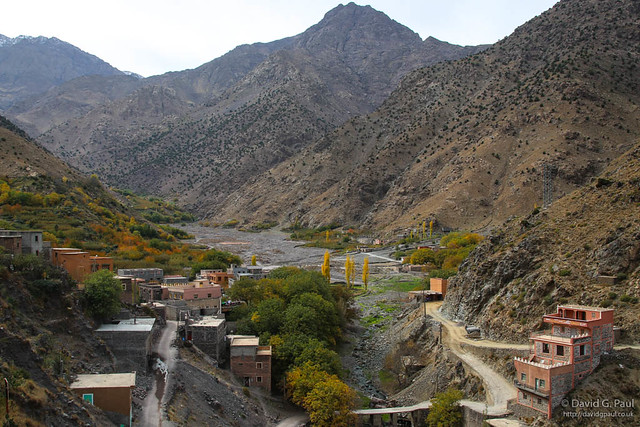 The trail descended into Aroumd where we met up with Howard outside of a co-operative shop. Hassan introduced us to the owner, and led us down the side of the building to where we were shown somewhere to sit, and given Berber tea. I was grateful this was the last time I’d need to drink any of it – with these high sugar diets I could understand why there were dentistry issues in the area.

After the drinks, John and Deb went shopping for a Moroccan carpet whilst I looked at the fossils they had for sale. We’d seen a lot of rocks during the morning’s hike that would have been very likely to contain fossils, and Morocco is known for its fossils so buying one here felt like the right thing to be doing.

Of the fossils they’d got, I found a nicely sized ammonite which was only three hundred dirhams. I was supposed to haggle. I should have haggled. It was the equivalent of about £25 though so I felt it was a good price already, and not haggling meant more money for the local community anyway.

At best it’s probably only a mile to walk from there back to the Kasbah, starting with passing a waterfall and then following a watercourse all the way back. There are stalls near the waterfall that sell different types of food, or at least would during busier times. 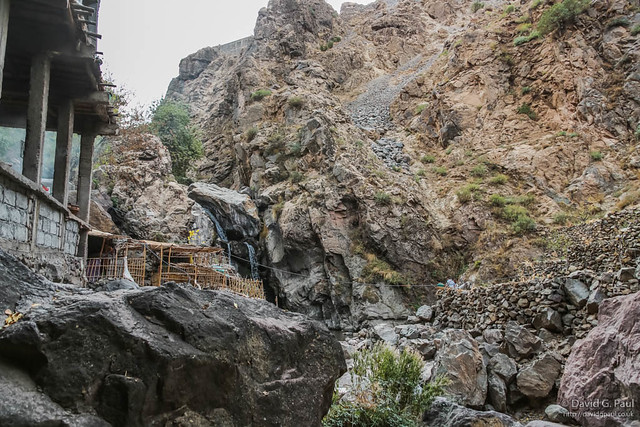 I dropped my camera off at the Kasbah, and headed off on my own for a run. I hoped to reattempt the section of road I’d run along earlier but found it difficult to remember. After many false starts I decided to run down hill to Imlil, and run along the road from there.

There was one corner as I neared the road that reminded me of Kathmandu – it was a comparison I’d read about, but hadn’t seen until that moment. One thing was certain though – running around the Atlas Mountains, even on roads, is harder work than I’m used to.

It seemed I wouldn’t be able to find the section of road that way either, so I decided I’d call it a day, and ran back to the Kasbah for lunch. Lunch was massive – salad, couscous, kebabs, chips, and rice. It may sound like an unusual combination but it got us to try some more types of Moroccan food. Once I’d eaten I then booked to use the hammam for thirty minutes – the standard slot you book it for. 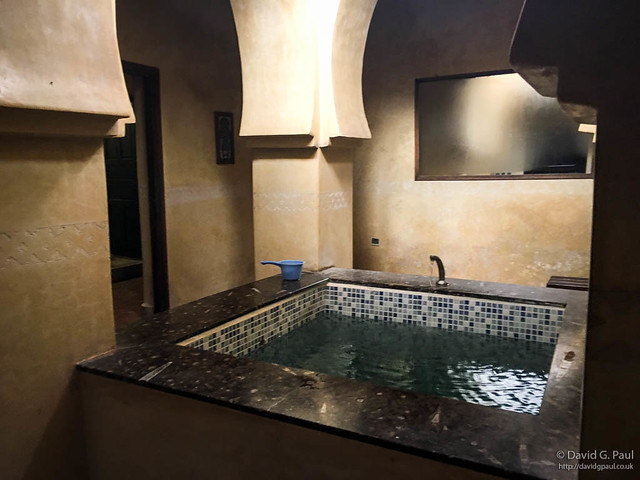 Unlike the previous hammam this one is in a room which you can lock, so you can either use it by yourself or as part of a group. I booked it for myself, so after being shown what was what I locked the door and entered the steam room.

In the steam room there is a cauldron of water which is heated from underneath by a fire. This makes the water very warm, so you use buckets of that to pour it into another where you can then mix cold water in from a trough. There are seats as well so you can make yourself comfortable whilst you slowly cook yourself.

Once done there is then a raised cold plunge pool in the middle of the main room with a constant flow of cold water into it. In another room off to the side there is a washroom and shower. There are even power sockets spread around the room should you need power for anything – such as charging a mobile phone. You need to be careful though as obviously water and electricity don’t mix.

Things like the hammam, and food and drink pretty much on demand help to make the Kasbah du Toubkal an incredible place. I think it’s the right time to visit at the end of a hiking adventure rather than at the start. Though I wondered if I was there too long. I don’t usually sit around with nothing to do – perhaps this would have been a good day for me to have left so I could visit Ouarzazate.

That evening we went for our last meal together as a group – the usual starter followed by a lamb dish. To see the day come to an end we played cards one last time.