Once I was ready to leave I went to the reception area of the Kasbah and handed them a bag with my running shoes in. I’d donated my shoes to Hassan so he could get some use out of them as his own were worn out.

When we were all ready we followed the path out of the Kasbah du Toubkal and down to Imlil. This was the same path I’d previously run along so this time I knew where we were going. We caught a taxi at 10:00 which arrived in Marrakech a little over an hour later where we dropped off our luggage at the Hotel du Foucauld. This was a place the Kasbah had an arrangement with for allowing guests to do so.

Howard led us from there through Jemaa el-Fnaa, the main square in the Medina of Marrakech, and told us about the famous orange sellers there. They’ve been known to start fights with each other if one thinks they’ve caught your eye and then sees you buy from another. 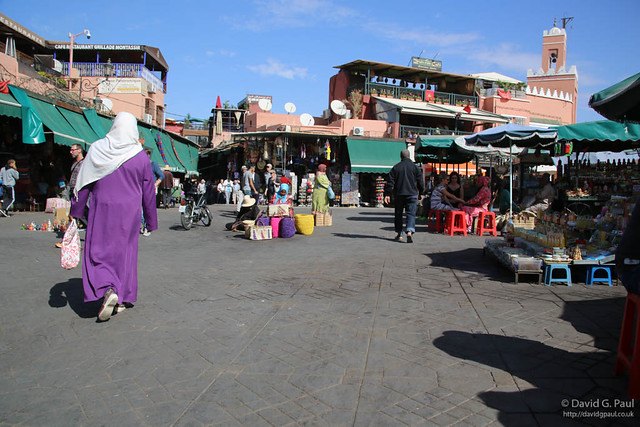 To the side of the square are the souqs – a name which comes from the Hebrew word for marketplace. Here we could see alleyway after alleyway of shops selling all sorts of goods. Many shops were similar which reminded me a lot of Kathmandu, though for the most part this area was considerably cleaner.

As we entered the souqs we witnessed a fight being broken up. I couldn’t be sure what was going on, but shortly after one of them ran in front of us and attacked someone else who was in front of us. It appeared one of the ones fighting had gotten in front of us and the other had now caught up to continue the fight. He wrestled him to the ground, and rather than punching it seemed to be a combination of wrestling and slapping.

I stepped back one pace, and watched in surprise at the scene unfolding in front of me. Other onlookers got involved and started pulling them off each other. It was speculated that one of them seemed to be a shoplifter and a known troublemaker and that is what had been the impetus for the fight. 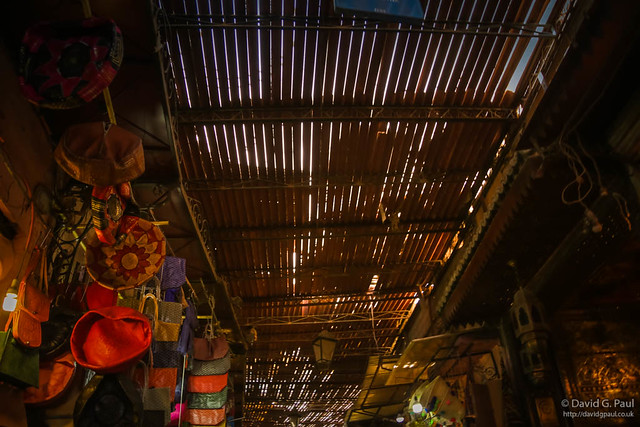 At the end of this alleyway it gave way to an open air square where stalls were setup in the sun without a shop behind them. It was here we came across animals in cages such as small chameleons. It felt incredibly cruel.

Of all the souqs in all the towns in all the world, we just so happened to walk through the one the French couple we’d met in Tizgui were looking around. We stopped to chat with them briefly before moving on back to the alley we’d come from.

We went up onto the terrace of a cafe called Nomad for a drink. From there we could see across the rooftops of the souqs, and beyond. In one direction we could see a lot of satellite dishes, and beyond that the minarets of mosques. I noticed at this time that the dust from the mountains had gotten not just over my camera, but inside the lens itself. My hope was that it wouldn’t have ruined any of my photos. 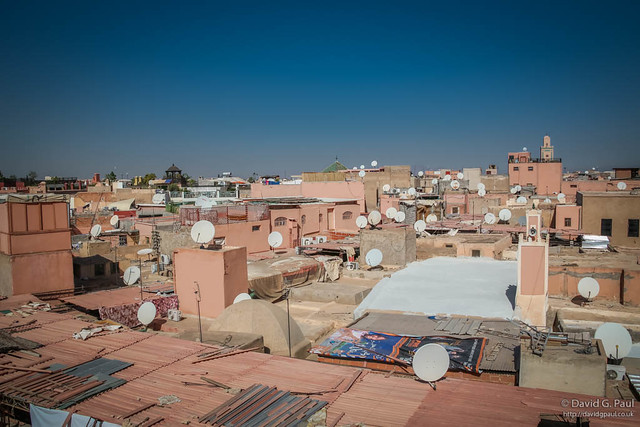 As we left the cafe we parted ways with the suggestion of meeting up for lunch at 15:00. I wasn’t sure if I would make it, so I said my goodbyes just in case. I then set off in the direction of the Koutoubia Mosque. Since it’s the tallest tower around, it wasn’t that hard to find.

Non-Muslims are not allowed inside the mosque so I photographed the exterior on passing, and then continued down the road to one of the old city gates – Bab Agnaou. This gate is quite ornate, but is also quite busy so it’s difficult to get a photo without either people or passing cars. 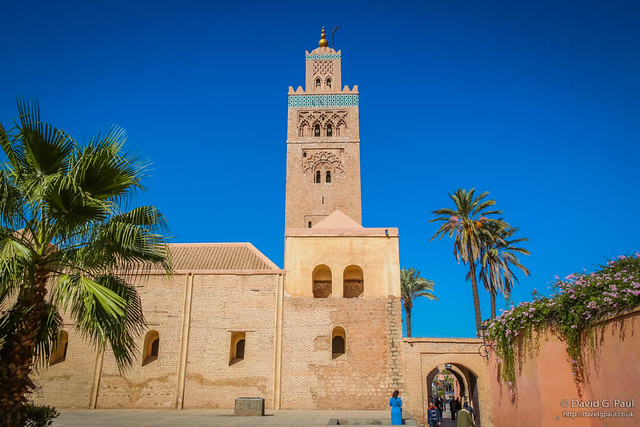 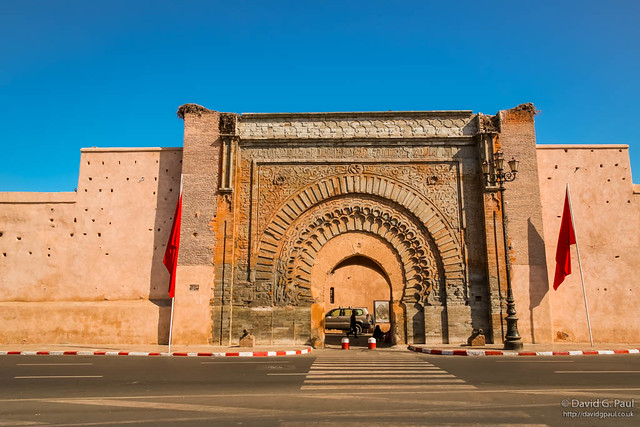 As I walked through the gate I turned right, and went in search of the Saadian tombs. These tombs were discovered in 1917 and date back to the time of sultan Ahmad al-Mansur, the builder of the El Badi palace in Marrakech.

In 1672 the Saadian dynasty had come to an end, and in this time hundreds had been buried in these tombs. Moulay Ismail wanted no sign of this dynasty to remain, so destroyed the palace, and sealed the entrances to the tombs so they could only be accessed via the Kasbah Mosque. Hundreds of years passed and the tombs were forgotten about; that is until the French General Hubert Lyautey rediscovered them.

I found the Kasbah Mosque the tombs are part of pretty quickly, but it took longer to find the entrance as I found my way blocked in one direction so had to backtrack and try the other. 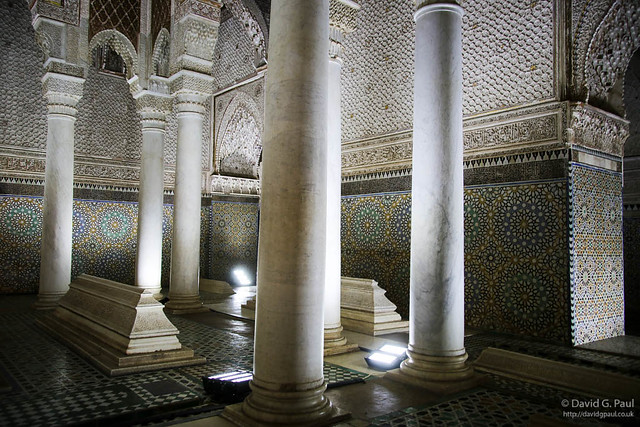 The entrance to the tombs is ten dirhams, so is extremely cheap to see; back home I’d expect the entrance fee to be around ten times that. Inside there are a number of tombs which you can see, and most of what’s there you can see pretty quickly. The most ornate of them tends to get a queue though, so I stood queuing for ten minutes to see it. Though ten minutes later the queue was practically non-existent.

The best of the rooms has twelve highly decorative pillars amongst the tombs. The bottom half of the walls are covered in mosaic, whilst the top half is sculpted. The amount of skill and money required to create these tombs must have been substantial.

When I finished, I sat down on the wall outside and had some water and a flapjack to keep me going until the late lunch. Once ready I set off in search of the El Badi Palace. The next piece of Saadian history. 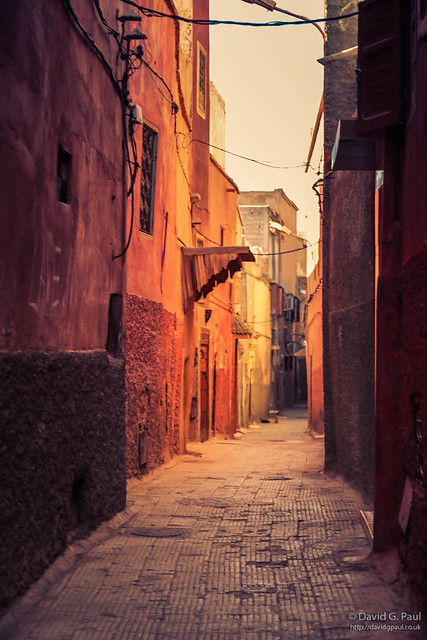 This palace was a little trickier to find, and at first I went in completely the wrong direction. I found myself walking down random alleyways filled with locals, and mopeds hurtling through them. Eventually though these winding passages opened out into a large square, and there was the entrance.

The entrance to this one was twenty dirhams, so still not that much. The palace is large and can take anything between thirty minutes and three hours to look around depending upon your speed. I’d be looking around as quickly as I could, taking as many photographs as I could, in order to try and fit in as much as possible. For the equivalent of £4, it was more than worth it.

I’d seen where the Saadian dynasty had been buried, and now I could see where they ruled from. This ruined palace was once a shining example of craftsmanship and extravagance with excessive use of gold, onyx, and marble. None of this could be seen now though, as the materials had been stripped from the palace when Sultan Ismail Ibn Sharif constructed a palace in his new capital of Meknes. Now it lays in ruins, but with obvious restoration work being undertaken. 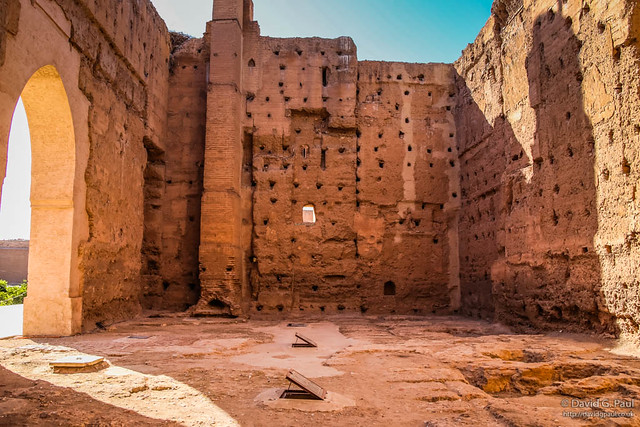 Near the entrance I took some stairs down into the “cave”, and passed through there very quickly as I didn’t want to waste time reading all the signs. This eventually got me to another room with various walls and no roof, but then some stairs back up to the original level, and the courtyard.

The courtyard has many sunken terraces, some of which are empty, some have trees planted, and a couple are filled with water. It creates an interesting view I think, especially with the storks nesting on some parts of the wall. 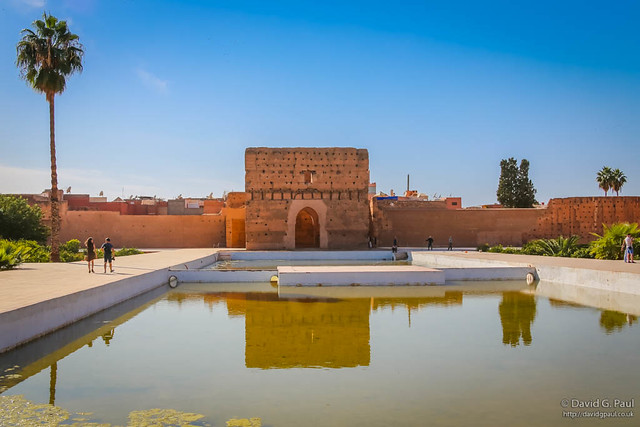 In the far corner was an arch that led to another part of the palace with many ruins you can walk around. These don’t take that long really, so before I knew it I was back in the courtyard and heading up onto the terrace to get some photos of the area.

Somehow I got around the entire palace in only thirty minutes, or thereabouts. I’d thought it’d take me a couple of hours but as it hadn’t it meant I could meet back up with the group one last time.

I found my way back pretty easy, and was hassled by shop owners many times, but I just kept on walking passed them. It’s the only way to get anywhere really. I did make one brief stop to buy a souvenir though at one of the shops where I wasn’t hassled.

We met at the Jemaa el-Fnaa and went from there to a nearby restaurant for lunch on their terrace. The service there was that slow that it took Howard asking one of them to get served.

I decided to try the mixed skewers as it’d mean getting to try each type. This combined with a drink and the tip cost me 120 dirhams – not bad! I fed some of my leftovers to the stray cats that were wandering the terrace, and then headed back out onto the street.

We walked around the food stalls that were being set up, as I intended on eating there in the evening. Amongst the stalls a number of acts were also starting to appear, such as snake charmers with a multitude of cobras on the ground in front of them. It was looking like it could be a very interesting evening, but I’d need to be careful with photographs. If you photograph anything around Jemaa el-Fna then they’ll expect to be paid for it, and have people keeping an eye out for anyone trying to sneak a picture.

It was then only a short walk back to the hotel to collect our bags, and to say goodbye. I then headed off into Marrakech to continue on by myself as dusk approached. 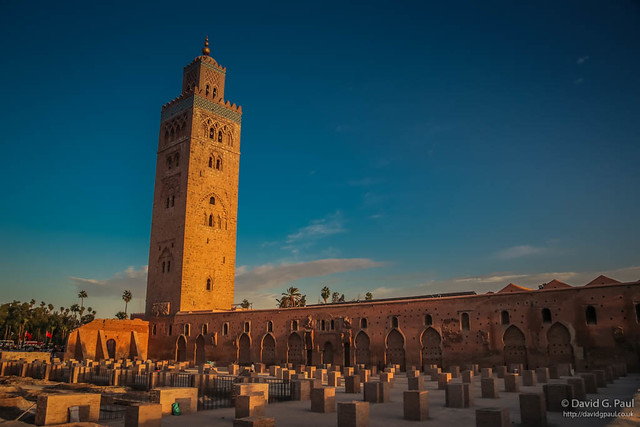 My backpacks were heavy, so the forty minute walk to the hotel was hard work. It would probably have been better to have gone by taxi in hindsight, but it was good to know how long this journey would actually take on foot as I’d need to take it again eventually.

The room I’d booked at the Opera Plaza was incredible. It overlooked the opera house, had two double beds and a single bed, and was very spacious. Even the bathroom was impressive. What wasn’t though was the WiFi – it kept cutting out whilst using it, although when it worked it was the best connection I’d used in Morocco.

After a quick shower I headed out into the night to find somewhere to get supplies from. I found a Carrefour supermarket under two kilometres away, and bought everything I needed for lunch over the next few days. I found that it was more than I needed too, so used some of that for my evening meal instead of walking all the way back to Jemaa el-Fnaa. That could be something for when I returned to Marrakech.

That evening I packed my bags properly ready for the train journey to Rabat in the morning. I was also able to use the internet to speak with those back at home before going sleep.