Breakfast was the usual at the gite, and this being a shorter day I decided I’d eat lightly before our trek. Today we’d be walking from Imska, over another peak, and then down to the Kasbah. 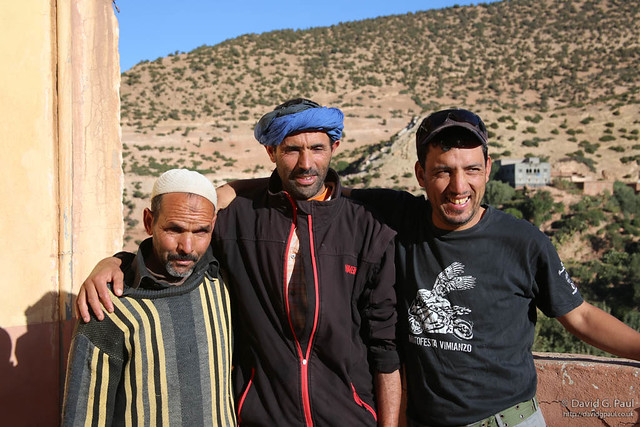 As we left the gite we said goodbye to Mohammad and Lessem, and tipped them for their hard work over the past week. I couldn’t imagine what it’d have been like if we’d had to carry our own luggage and cook our own meals each day. They did all that for us, we just had to walk or run from place to place. They’d be doing it one last time to get our luggage to the Kasbah ahead of us.

Our trek started by following the road through the village under the shelter of trees. When we passed a school, John and Deb were once again surrounded with children as she handed out the sweets she’d got left. At least this time it wasn’t like in Tizi Zougouart – here they were as happy as the other villages we’d been to. 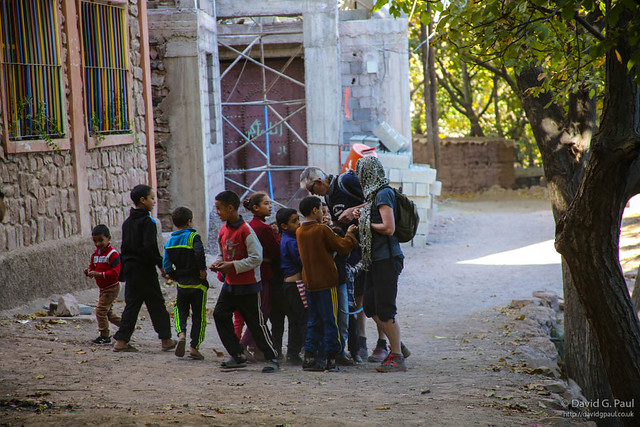 The path then starts to wind up into the mountains but remained an easy one. To pass the time we started playing games where we picked a subject and then had to name things from it for every letter of the alphabet. Naming places in the Southern Hemisphere is harder than you think – you have to think where the equatorial line passes through each country.

We passed another village with a newly built school, though it hadn’t yet been finished as it had no sanitation. Apparently the 45th President of the United States had funded the construction of this school, but the money had been siphoned away from it so it couldn’t be finished. One of our group has passed this school many times, and this was the first time he’d seen it in use. 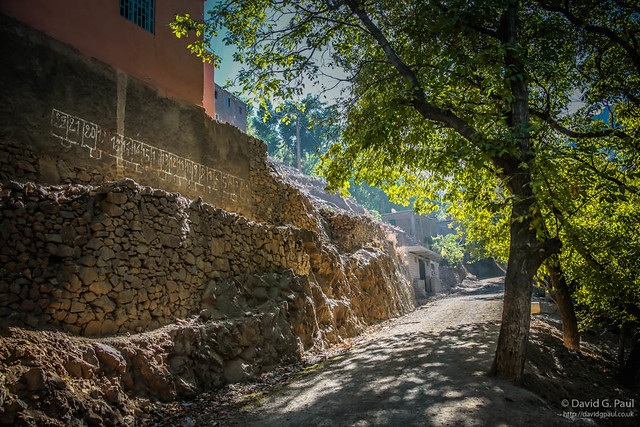 After this the path became more exposed, and the sun beating down made it harder work. Strong sunscreen was not working at all so to try and avoid being burnt I was trying to move quickly whilst in the sun, and then slowed for the shade. This continued for quite some time as we worked our way up through the valley having left the road behind us.

We passed through a number of villages where we could see people going about their work. In one such village we stopped at someone’s house for a cup of Berber tea. I’m really not that keen on it so poured it for everyone but myself in the hope it wouldn’t be noticed I’d missed myself. I paid twenty of the thirty dirhams we paid for the drinks, and the left the shade. It’d been nice to have been out the sun for a while.

When we returned to walking it was getting closer to midday and the sun was stronger than ever. I really can’t emphasise enough how important it is to be either covered up or to have decent, working sunscreen.

The path climbs a little more and then descends to where some villagers were washing clothes in the stream. On the other side of this we began our final ascent. 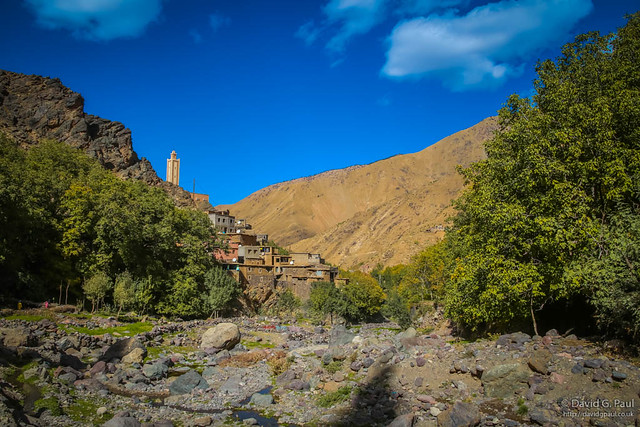 This started with a climb through a tree lined path that had water trickling down the middle of it. It then gets steeper and starts to zig-zag until you reach the summit at over 2,000 metres above sea level.

At the top there is a shop made from large stones where we sat and had drinks. It was a great view of the valley we’d worked our way through during the course of the morning. All we had to do now was to descend to the Kasbah du Toubkal. Our last climb was over. 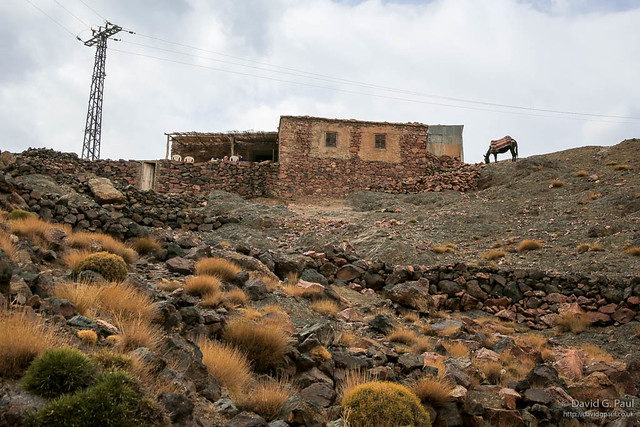 For starters, the descent was a mixture of walking down the road and along trail shortcuts between each segment of road. Eventually this gave way to a trail through a dried up river bed which somehow met up with the road once more.

We left the road again shortly after to descend through a village, one which turned out to be the higher part of Imlil. As we walked down this road I was told how this exists on the tracking application, Strava, as an uphill segment you can race. I was certainly tempted to return to this road and try it, if I could find my way back.

Instead of following the road into the centre of Imlil we took a trail behind the buildings that followed a watercourse until it reached a bridge. On the other side of the bridge, after some more winding path, was a large gateway with a sign that read “National Geographic Unique Lodges of the World”. This was the entrance to the Kasbah du Toubkal. Our trekking had reached its conclusion after five days and many miles. 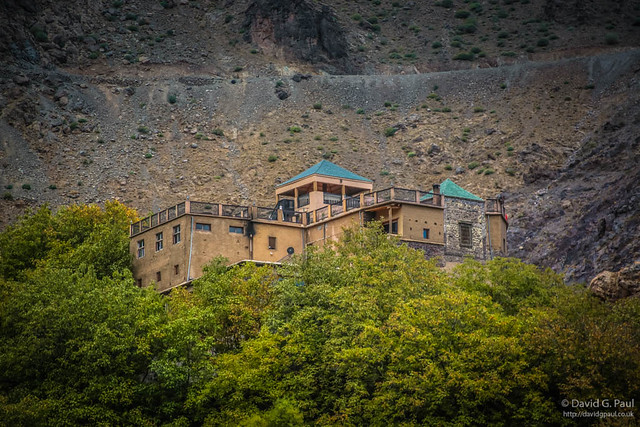 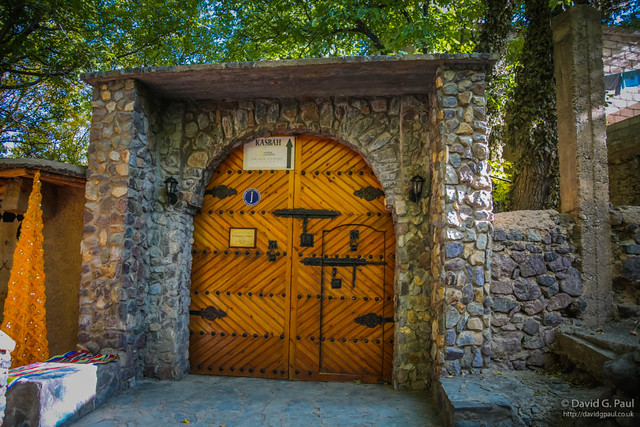 Accompanying the large gate at the entrance is a gatehouse, and beyond that is a garden and a path leading up to the main building. In front of this building our luggage was sitting there waiting for us.

Before Hassan left us to enjoy the luxury of the Kasbah, we made plans for one last hike for the following morning. It’d only be a short hike, but could be an opportunity for me to run. 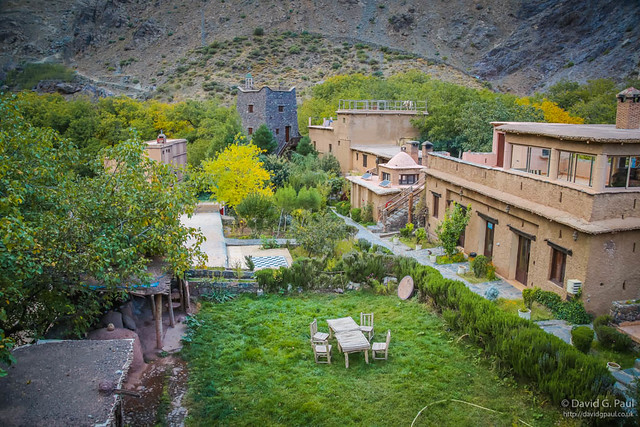 The Kasbah staff led us upstairs to where they served us a salad lunch followed by fruit. As they knew Howard, they’d also upgraded us to a shared suite – a section of the Garden House. John and Deb slept in the bedroom downstairs, and we had beds made up in what would normally be the lounge. It was an amazing place, and was nice to have a balcony too.

The suite did have its own bathroom with bath and toilet, but we agreed those of us upstairs would use the showers and toilets in the main building instead. It was nice to have a proper shower again, and to be able to relax with a cup of tea. Any food or drink you have inside the Kasbah, and even use of the hammam, is included as part of the price of staying there.

The Kasbah also has Wi-Fi which means a chance to get back in touch with the outside world after days of trekking. It’s not a reliable connection, or particularly fast, but it can be useful when it’s working.

I wandered around outside and got talking to an Australian couple in one of the lounges. They’d been travelling down from Scotland for three months and had been staying in the Kasbah for a week. Their next stop after returning to Marrakech would be Rabat – same as me.

The Kasbah has a number of cats that wander about the grounds. There doesn’t seem to be any food or water left out for them so I couldn’t be sure if they were strays, or if they find their own food. If we’d been in Marrakech then they’d almost certainly have been strays.

At 18:45 we had an aperitif to socialise over before the evening meal which was a table booked for 19:30. It was nice to be able to just sit in the suite and relax for a while. The evening meal was in the dining room; the lights had been turned off and was now lit by candles on every table. 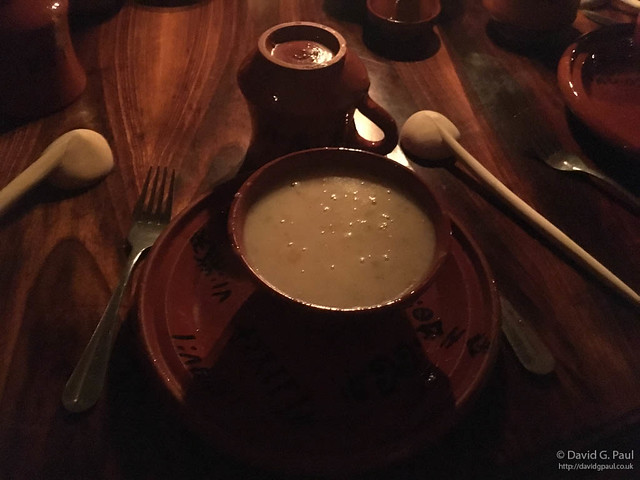 The starter was a vegetable soup, which I don’t think was as good as the ones Mohammad had done. The tagine for the main course was lamb and vegetables; this was something we couldn’t finish due to it’s size. However, we all still found room for the apple tart dessert and for biscuits with a cup of tea.

That night we played cards once again – it had become a popular pastime for the group.