It was time for our last long journey – today we would be on our way to Playa del Carmen, but via the UNESCO World Heritage site of Chichen Itza, one of the modern “Seven Wonders of the World” (on the New7 millennium project list). We were picked up from the hotel at 08:40 and for the next 2 hours we were on the road.

As it happened our guide for the day was the same person as the day before, just through a different company which is quite remarkable chance. Along the way to Chichen Itza we were given the chance to go to a cenotes called Ik Kil for 70 pesos extra. A cenotes is a sinkhole that when the ground has collapsed it has revealed groundwater underneath. This particular one is 60 metres in diameter and sinks to 26 metres before you reach the water which is then around 40 metres deep. It also has a number of long vines hanging down into the hole. For those who want to take photographs, swim, or just get closer to the water, there are steps which go underground, down to the level of the water. 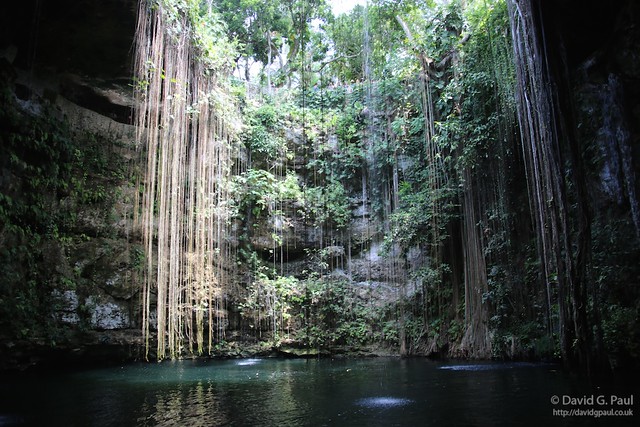 I didn’t find this out until much later, but an amazing coincidence was that a few hours later during the UK broadcast of “Game of Thrones” this cenote featured in an advert for Hostelworld.

After about 40 minutes of looking around we got back on the bus but it only took a few more minutes until we reached Chichen Itza. The plan was to spend the next two hours looking around the runs so that we’d be having lunch at 14:00. 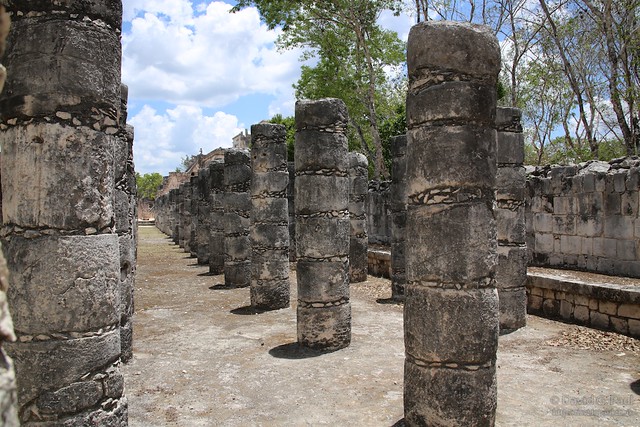 The first ruins we saw was a temple called “The Temple of the Thousand Warriors” where there was supposed to be a column for each. I’m not sure if there actually are a thousand, I doubt it, but I agree there are a lot of them. From here we then crossed through some pillars to where we could see “El Castillo”, the famous temple pyramid. It took ages to get a photograph of the pyramid without people in it, and you could get very different shots from different sides – two of the sides are in excellent condition, whereas the other two are undergoing some restoration work as they’re in bad repair. There are 91 steps on each of the four sides adding up to a total of 364 steps, with one final step at the top to make it equal to the number of days in the year. 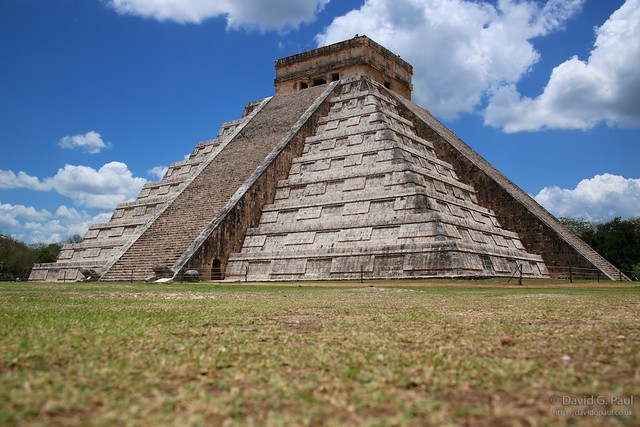 We then wandered through another temple around to where there was a large ball game court and then from there the path led back passed El Castillo and on, through the searing heat of the midday sun to the Observatory. This building is rounded like modern observatories and has a single entrance with multiple windows in the roof above it. Once we’d done there we continued on, passed the cenotes and on to the nearby hotel for lunch. 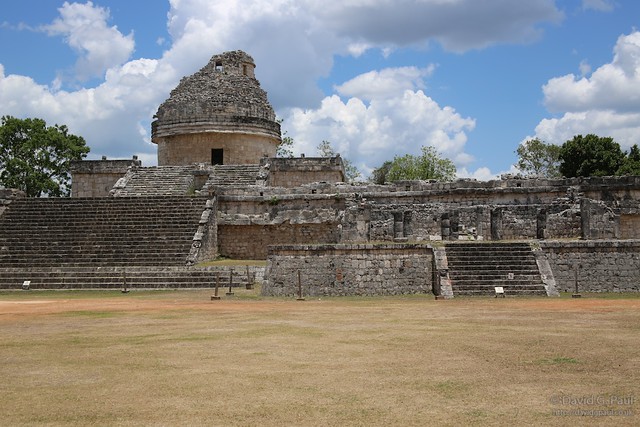 The lunch was a buffet lunch which included foods from all over the world, including local Mexican dishes, but the drinks were not included. This was with some entertainment where waiters and waitresses were doing some sort of traditional dance. Once lunch was over we transferred to a different bus and then continued on to Playa del Carmen. This bus ride took over 3 hours so that by the time we got to the Hacienda Real hotel it was already passed 18:00.

Unfortunately we found breakfast would be served from 08:00 – too late for us to get breakfast on either diving day, or on the day we’d be transferring to the airport. At best it seemed we’d only get to eat on one of the four mornings we’d be there. So we headed out and bought breakfasts for the next few days, and once having dropped them off at the hotel went back out to get an evening meal.

We opted for a mixed grill at La Barbacoa where they were having a “Guns n Roses” music night – streaming their hits from a playlist on YouTube. Once done we walked over to the beach to see what was there and then headed back to the hotel to get ready for a couple of days of scuba diving.