We had no idea what time we were going to be picked up; although I’d asked the tour company to email confirmation and to let the hotel we were staying at know, they hadn’t. We went for breakfast a little after 07:00 and once again it was the usual toast with egg and bacon mashed together. Considering I don’t really eat eggs it was starting to get a little tiresome.

We were downstairs in the lobby of the hotel by 08:45 and waited for about 30 minutes. Around this time I was finally able to get a (sort of) working internet connection on my phone and was able to pick-up emails. At this time I saw the response from Viatour that they’d received my email (which I’d sent a couple of days ago) and late the night before they replied to say that we’d need to phone Mayatours to confirm pick-up times, despite that being what my email was for.

A little confused and exasperated we called the tour company asking them what was happening and they claimed that the pick-up was at 08:45 despite there being no one there to collect us at that time. They then confirmed they’d be at the hotel in another 20 minutes, so around 09:30.

At 09:30 two people from the tour company turned up, they apologised and said we’d missed the tour as they’d not received confirmation of the tour (despite me having an email from them to say the tour was confirmed). They then agreed that they would take us on the afternoon tour to Uxmal that would leave at 12:40; the tour would last about 2 hours, and then we’d go for the included meal. As a way of apologising they were then throwing in drinks and a return to Uxmal after dinner in order to see the night-time sound & light show there. This did mean we’d get back for 22:00, but it sounded like a great alternative to missing it altogether. 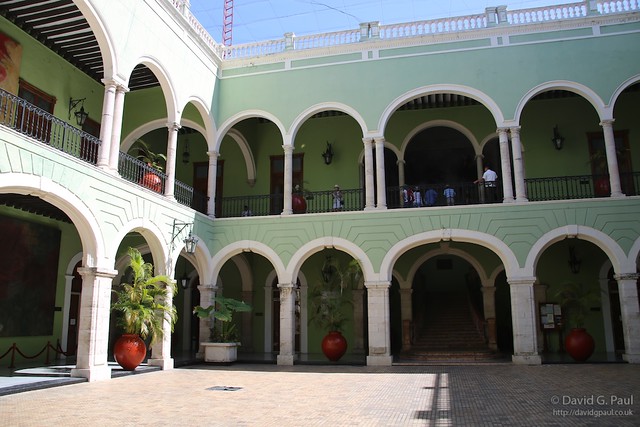 So, our plans having changed, we headed out into the city for a little over an hour, wandering around to see what we could find. After another failed attempt at getting photographs inside the cathedral (Sunday mass!) we wandered around the whole square until we came across the Government Palace. We asked the police guarding it if we could go in, and entered. It was a little similar to the one in Mexico City except the paintings on the walls were about the slave trade and more recent history. We also got to look in a large hall with larger paintings and polished floors. Having finished looking around we got a few bits for lunch and headed back to the hotel to relax until it was time for the tour. 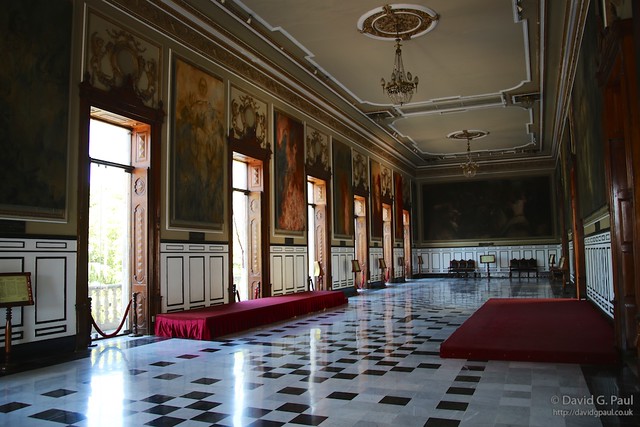 The tour guide turned up on time and on the way we picked up four Argentinians who were also doing this tour. It took about an hour for us to get there meaning we were arriving at 14:00, the hottest part of the day. Not long after entering we spotted an iguana and thinking that we wouldn’t see many I messed around getting my camera ready so I could photograph it – little did I realise just how many of them there were at Uxmal! 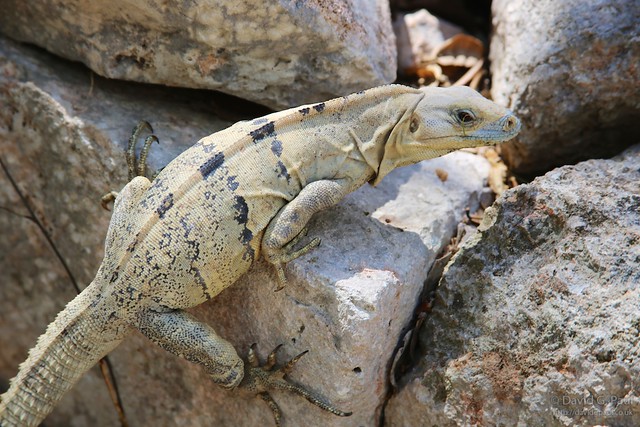 For the next couple of hours we wandered around the ruins – passing the large temple into the courtyard and out into the trees alongside a ball game court. This was the same sort of court that we saw in the Anthropological Museum in Mexico City, though this one was in it’s original location (albeit with replacement hoops). 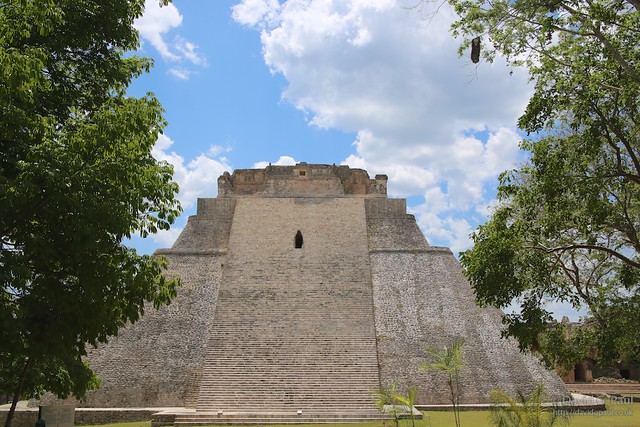 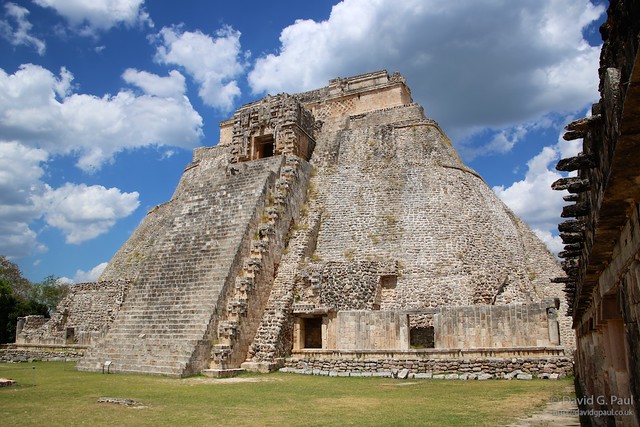 After this we continued through the trees to a temple which we were allowed to climb up – the rest of the group didn’t bother to climb it but I figured that it was worth climbing just to get a good view of the Uxmal area. The others were impressed with the speed which I climbed it in, on the way down though I was more cautious as tripping over and falling all the way down wouldn’t have been. 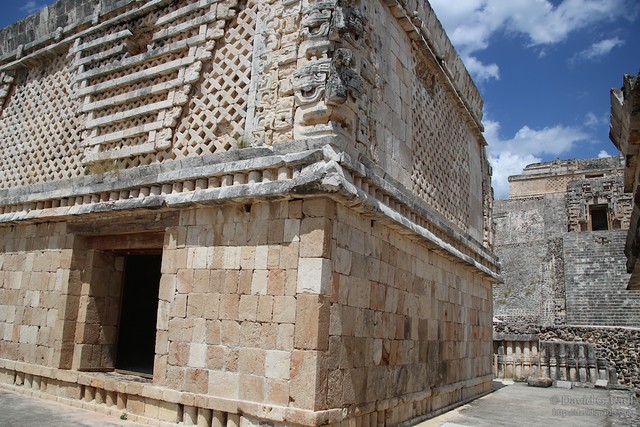 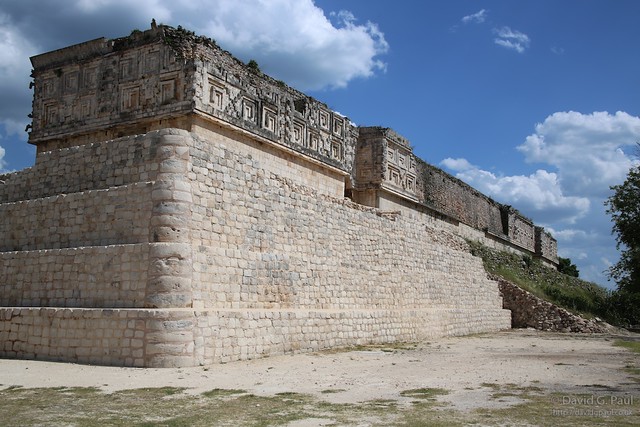 Back at the bottom I then realised that at some point, maybe in the last couple of days I’d lost one of the straps off my bag. I looked around the area where I’d taken my bag off before climbing, but couldn’t see it. Instead we carried on to the palace ruins. Once we’d finished there I then left the rest of the group and backtracked all the way back to the beginning of the tour and as far as the entrance. Unfortunately I couldn’t find it anywhere.

We had some time to spare, but not enough time to really do anything so we sat by the pool in the Hacienda Uxmal hotel for 40 minutes until it was time for the included meal. This was a vegetable soup for starter, followed by pork in a local Yucatan sauce with rice. The dessert was very sweet – it was a locally made ice cream sorbet made with mamay fruit. I didn’t eat that much though, in part due to it’s sweetness, but also in part as I couldn’t be sure if it had been made using the local water. 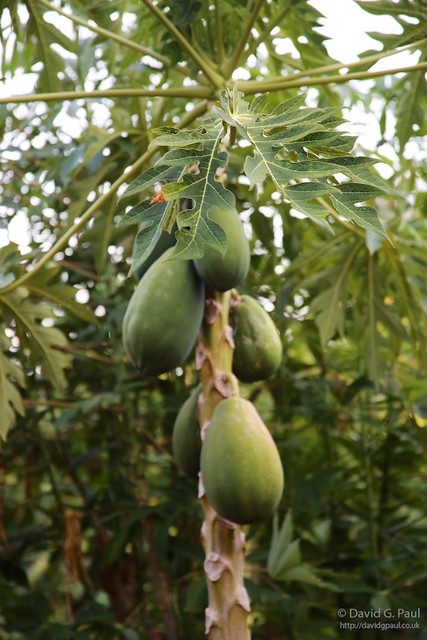 As there was still time to spare before we needed to be back at the ruins we were given a lift over to the Chocolate Story museum. This cost 120 pesos per person, and we were led as far as the first hut by our guide and then left to look around by ourselves. 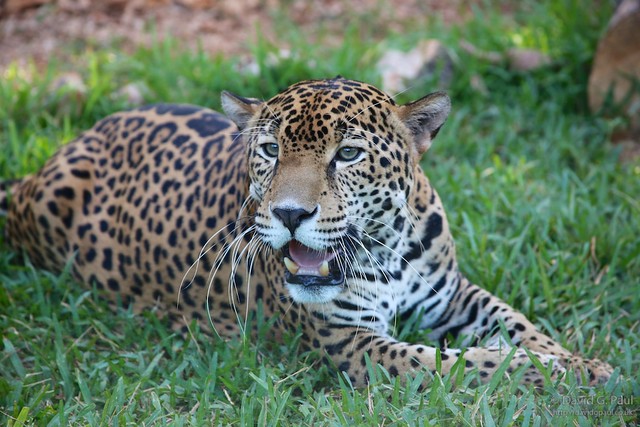 After the first few huts told us about how the cocoa beans are gathered and processed we eventually got to a cage of monkeys, and then shortly after to another set of cages – one with a male Jaguar and another with a female Jaguar. Just as I was getting ready to take a picture the female Jaguar leapt up and ran straight towards the glass and then stopped before turning away and laying back down. This all happened so fast that I couldn’t get my camera ready in time to photograph, but did at least get a few photos after she’d sat back down. 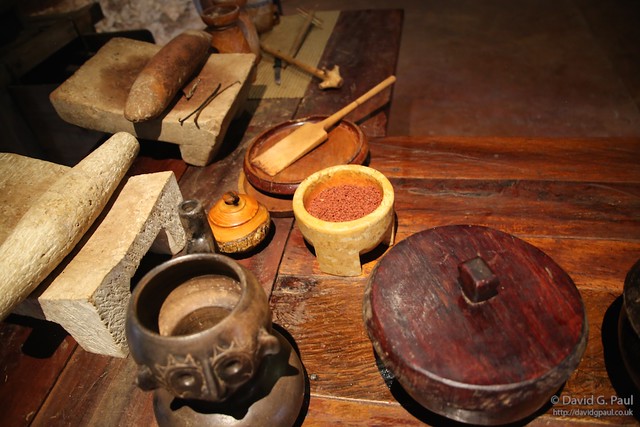 The last part of this tour then took us to a final hut where they demonstrated the process that the Mayans used to use when making chocolate and then got to try some. It tasted completely different to chocolate, and a little bitter. They had an array of different additions that the Mayans would use – annatto, cinnamon, allspice, hot pepper and sugar – after adding all of these it started to taste a lot better, but still tasted quite different.

Back at the Uxmal ruins we started queuing at 19:30 for the light show – not long after this we were then let in and led to an array of chairs that overlooked the courtyard. As the last of the sunlight left the sky the show began. 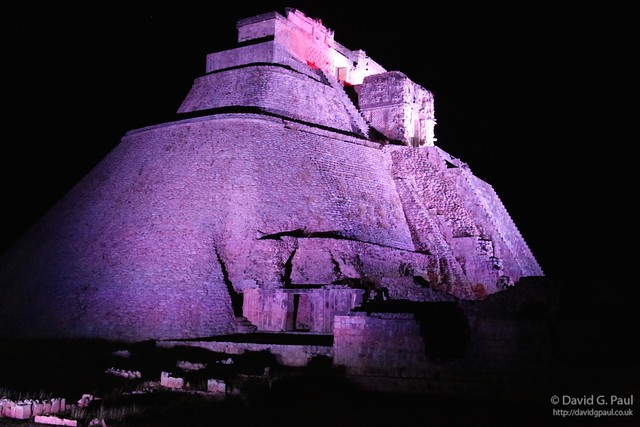 The light show a story told in Spanish (with no actors) and different coloured lights being shone on the different parts of the ruins to indicate where the story was taking place. As my Spanish is not particularly great, almost non-existent in fact, I couldn’t really understand the majority of what was happening. I got the impression that it was about some sort of drought and then something happened involving the temple (maybe a sacrifice) which resulted in them getting rain. Overall the light show was pretty boring, but it was over in 45 minutes.

The journey back to the hotel took about 1hr15, but this was due to a delay on one of the roads where the police were breathalysing every driver. Along this journey we also encountered a fire that had started due to the warm and dry conditions during the day. It was burning through the shrubs and trees on the side and sending smoke billowing across the road. Apparently this is fairly common at that time of year.