We knew this one would feel like a long day. We needed to be at the bus station for 08:00 and had to make our way there ourselves as despite “all transfers included”, it did not include this one. We walked from the hotel with our luggage for about 5 minutes to get to the bus station where we needed to locate the bus we would be on for 8 hours to get to Mérida.

This turned out to be really simple and by 08:00 we were on the bus and settled in for the long journey. Although it said it would be an air-conditioned bus, it wasn’t – the air vents weren’t working. For the journey they played several films, all in Spanish as you’d expect, but I chose to read Catching Fire instead.

There were a few stops along the way to drop off passengers and take new ones on, each one lasting around 20 minutes. We also had to stop at two military checkpoints where they boarded the bus and checked our passports. The first time took quite some time as they couldn’t find the entry stamp in my passport, but it was hidden amongst the stamps from China.

By lunchtime I’d already made a start on my supplies and the time was passing relatively quick up until then. Unfortunately the dozen or so insect bites I’d gotten whilst sitting outside the hotel restuarant in Palenque were starting to drive me crazy.

We arrived in Mérida 30 minutes late and it didn’t come as a massive surprise that the transport from the bus station to the hotel that we’d been promised wasn’t there. Instead we paid 60 pesos for a taxi to get us to the hotel. The Hotel Ambassador looked like it may have been built in the early 1970s and probably not re-furnished since then either. What was also odd was that the room’s window was full height and looked into the hotel corridor only.

As we were getting ready to head out into town we got a call from reception – the tour operator had apparently sent someone to pick us up and he’d been waiting at the bus station from 16:00 – 18:00 for us. However we can say beyond a doubt that he was not at the exit when we got in at 16:30. If there was more than one exit then we never got to see it as we were directed out of the one we took. It was lucky he met us at the hotel though as he had pick-up details for Monday and a map of Mérida for us to use. We did however still need to hear confirmation of the pick-up time for the Uxmal tour; however the hotel’s Wi-Fi didn’t work so we couldn’t check emails to see. 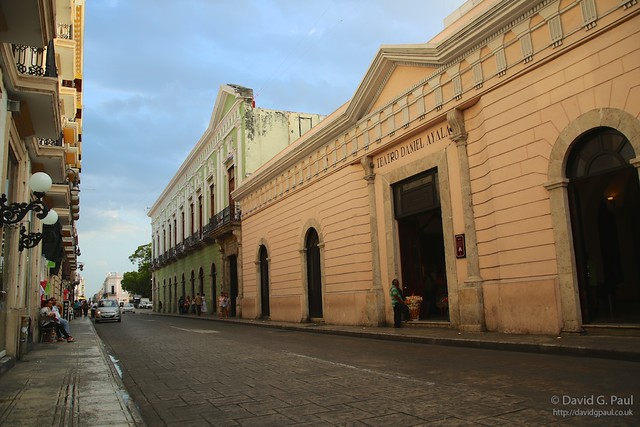 We headed out into the city to explore a little and soon found plenty of restaurants to chose from, and also some souvenir shops, a church, and a cathedral. In the first souvenir shop we came across I bought an ornament of a Mayan temple, a fridge magnet, and also a stone dolphin for my sister. We eventually got to the Hidalgo Plaza where there is a large church. Inside it looked like there may have been some sort of wedding or other ceremony taking place as there was singing and a lady kneeling at the altar. 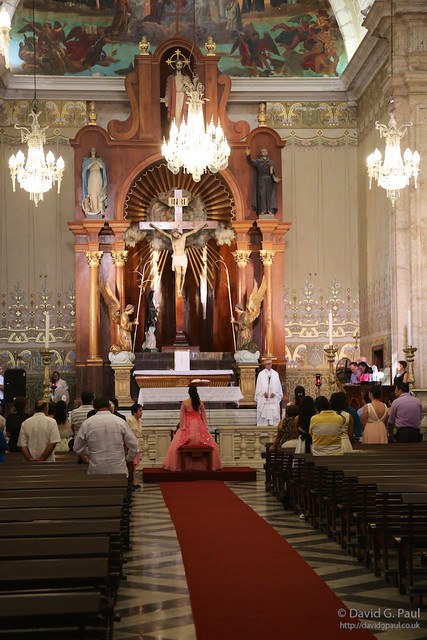 We soon moved on and found the Cathedral – this was quite impressive, but difficult to photograph. We couldn’t take pictures inside either as mass was currently in progress. Around the same square I got some antihistamine cream to help with the insect bites and then we went looking for food. 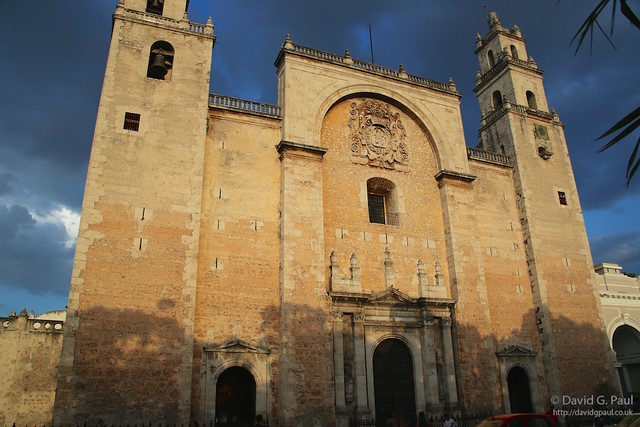 After the meal at Los Trompos it was still incredibly humid outside, even though it was dark and passed 20:00. Fortunately though it was only a short walk back to the hotel.