With an 08:00 start it was nice to have a lay in compared with the previous day. The breakfast though seemed a little odd – they wouldn’t let us sit inside the restaurant, perhaps because we were wearing shorts. At least that’s what it seemed to be because of. They then gave us a menu despite the “Americano” breakfast being included with the booking. It wasn’t a great breakfast though – two rounds of toast each and some eggs scrambled with bits of bacon again. It did at least come with a glass of watered down orange juice though. We also had to sign for breakfast, something we hadn’t had to do before.

Our trip today would be to the UNESCO World Heritage listed ruins of Palenque – one of the largest cities of the Mayan kingdom. It was approximately 10km away from where we were staying so it didn’t take long to get there. This was via a taxi driver, which was unexpected, and he didn’t speak English either. After the past few days we’d been going in mini buses so that’s what we’d been keeping an eye out for. 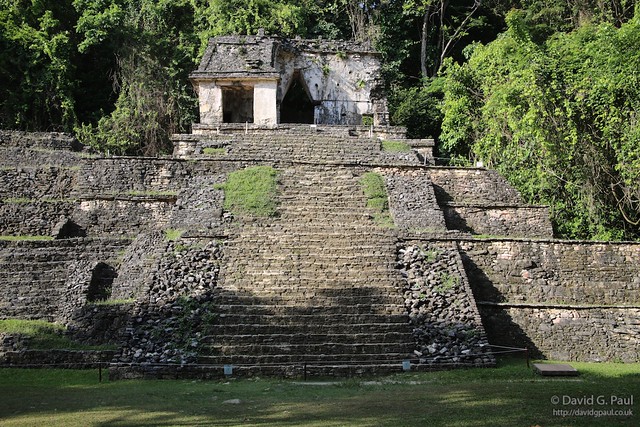 When we arrived at the Palenque ruins an official English speaking guide greeted us and told us that the tour would be one hour, but for an extra 500 pesos each we could do an optional extension to the tour to go through the jungle. It was a little surprising to find the tour would be so short when we had nothing else booked for the day. It seems that they like to keep the tours short, even though it’s possible to spend more time in these places – and there would be enough time left in the day! I think it would be better if Llama Tours (operated by Kamino Tours locally) had given us an idea of the length of each tour. We agreed to do the extra tour and then shortly after began walking through the trees to where we could see our first Mayan temples. 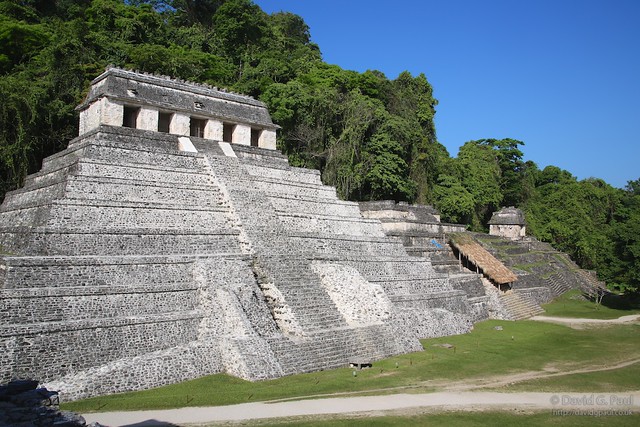 The largest of the ruined temples is the Inscription Temple where they found the remains of K’inich Janaab’ Pakal (King Pacal the Great). The name of this funerary monument comes from the tablets that were found inside the temple which have helped to translate Mayan words and give a greater insight into their culture. Unfortunately this is not a temple we were allowed up due to some damage. The one at the side however, which was where his wife was buried we were allowed inside. In one part of it you can see where the bricked up door has been partially pulled down and where the sarcophagus was found.

We then continued on to the “palace”, a series of rooms that were indoors and were the sleeping quarters for the aristocracy. Each room had a window in the shape of an upside down “T” symbolising that this was thought of as the underworld. They also acted as air conditioning of sorts as some of these windows would remain cool despite the outdoor temperature (which already was around 26C). 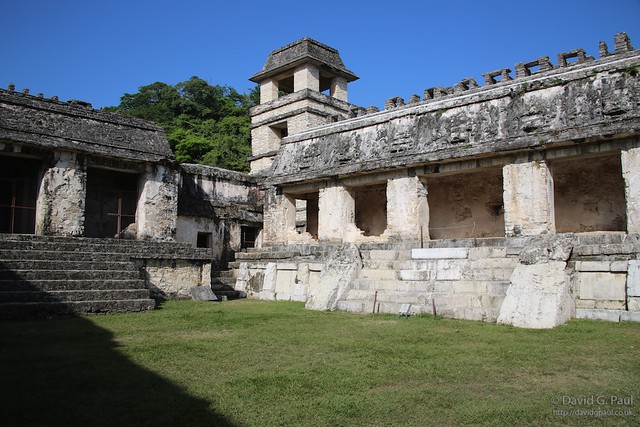 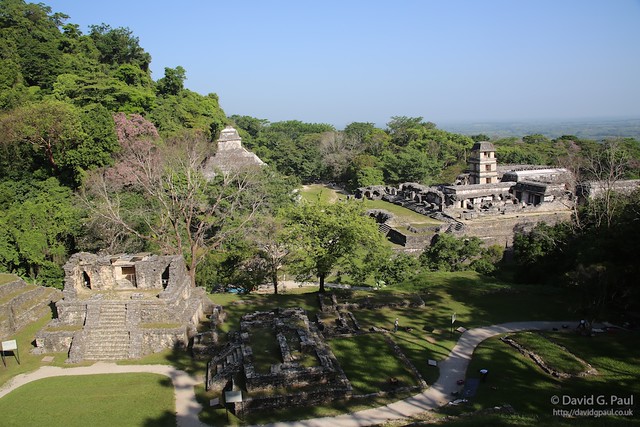 By now the hour was almost up and our guide led us back to in front of the Temple of Inscriptions to allow us to finish taking photographs there. Although there were locals selling souvenirs there, we didn’t have the time to look around and buy any as before we knew it the guide led us through a roped off area to begin our hike through the jungle. Before entering though he shown us a plant with orange coloured fruits which he explained were used by the Mayans to give the temples their colour (although very few walls of the temple still show this colour). 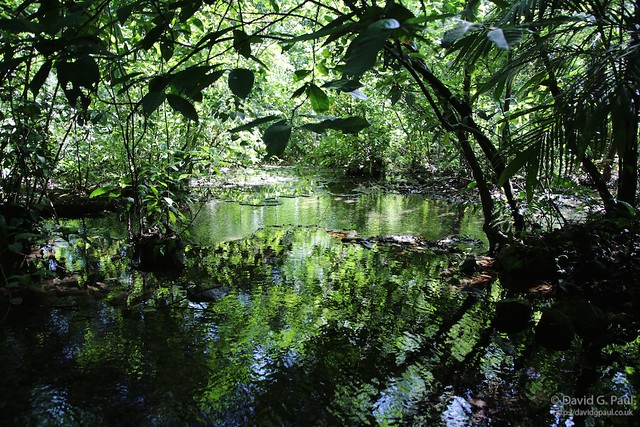 Again our guide set off at a pace which was pretty fast, possibly faster than we would have gone if the guide had not been there – and we often tour places faster than most would. At the start of this tour we could see how the trees and other vegetation had taken over the buildings there and had destroyed them. It is believed that only 10% of the buildings at Palenque have been found and that there are in fact thousands. 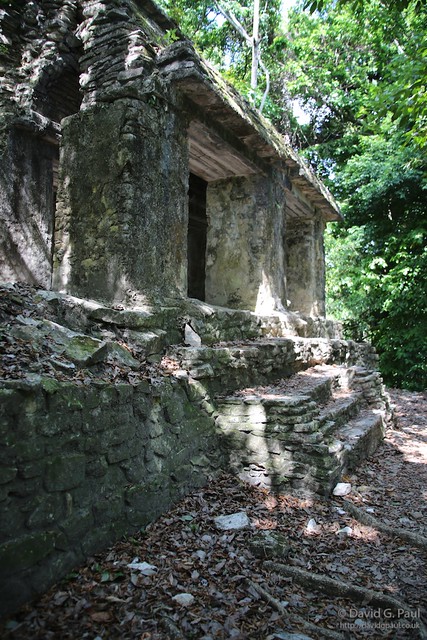 We passed a large termite nest protruding from the side of a log with hundreds of them scurrying around. For a long time our guide was looking for howler monkeys, but eventually he gave up and took us to what he called “the forgotten temple”. It was a fairly intact temple in the middle of the jungle, but some of the lower parts were damaged by tree roots growing through it. We climbed the stairs and had a look around this temple before carrying on through the jungle, crossing streams until eventually we got to a stone cave we could barely see into when crouching – but could just make out where bats were roosting on the ceiling. Sadly, although I had a flash for my camera with me, I’d left the batteries for it back at the hotel. This meant I couldn’t really attempt to photograph them.

After moving on we finally caught a glimpse of a monkey, however it was that high up in the tree canopy that it was pretty well concealed. We could see it move every now and then, and it’s tail hanging from the tree. From the way other surrounding trees were moving there was likely to be at least one other howler monkey up there also. For our final stop in the jungle we’d crossed another stream and got to see a small waterfall, but due to how warm and dry it had been it wasn’t flowing that well. We then left the jungle and continued onto the road and up the mountain to where we’d been dropped off earlier. This was a chance to take some photographs from high up, above the trees, but it also meant that the two hour tour had only taken 1hr30. 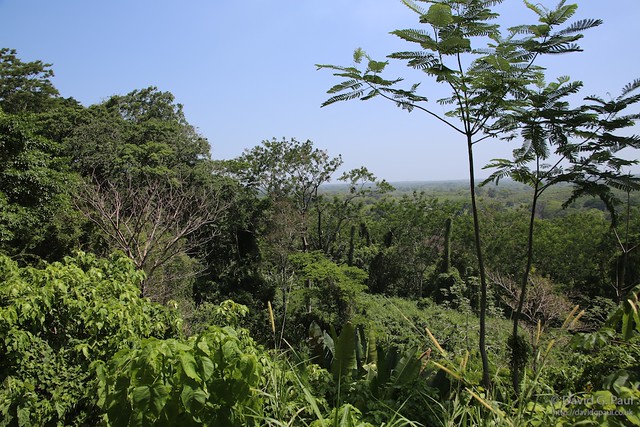 Getting back to the hotel by 11:30 meant that a good portion of the day was still left, so it seemed like a good idea to explore the town. After dropping off camera bags we made our way into a town that very much reminded me of the poorer towns in Peru – you could tell this is still area was not as wealthy as Mexico City. After a while looking around we eventually headed back to the supermarket to get some fresh supplies for the 8 hour journey to Mérida. 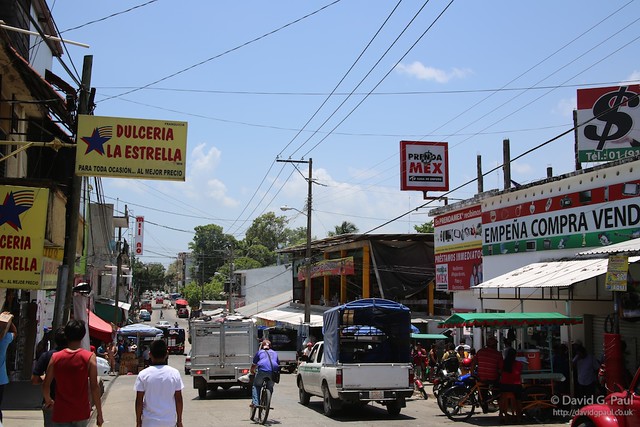 After dropping our supplies off at the hotel we headed out to get some lunch – I did want to try a burrito, but unfortunately the choices were a little slim this close to the hotel so I resorted to having a hamburger and fries. As the temperature had continued to increase I relaxed back at the hotel for a while, reading, until heading down to the hotel’s pool to swim, and to read besides it.

Two hours at the poolside was enough for me, so I went back to the room until heading out at 19:20 to get an evening meal from the hotel’s restaurant. It was then necessary to pack ready for the long journey ahead.