It was a quieter start to the day than in Mexico City – the sound of traffic started later and there was far less of it. We got up at 07:30 and headed over for what was titled as being an “American” breakfast. It didn’t seem like it to me though – it started with slices of watermelon (which I don’t like), followed by slices of toast, and then as a “main” there was scrambled eggs with little pieces of bacon mixed in with refried beans. I didn’t really eat that much so had a couple of cereal bars and some water when I got back to my room.

Today’s excursion was only 30 minutes away in the nearby village of Zinacantán. In the Nahuatl language this translates to “land of bats”, though whether they actually have bats there I couldn’t say. This village has it’s own laws, separate to the rest of Mexico and everyone, foreigners and Mexicans alike, have to pay 20 pesos to enter. One of the most notable laws here is that you cannot take photographs inside churches there and can be imprisoned if you’re seen to. 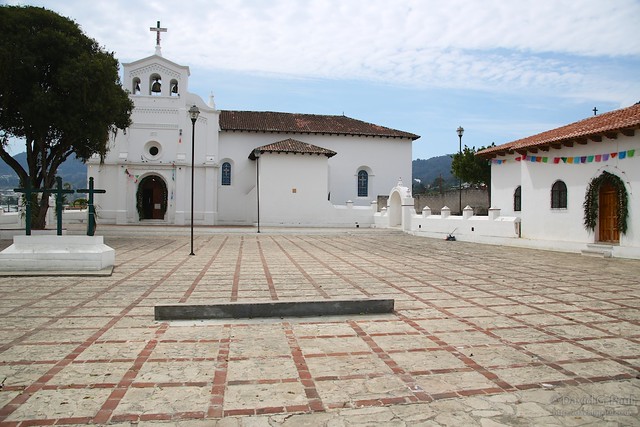 Our first stop was at their main church, San Lorenzo, where we went inside and wandered around for a while whilst our guide spoke to the Spanish speaking portion of the group. Once he’d finished with them we returned to him and he gave us a shorter version in English. Outside we then took a few photos before moving on to the chapel where the guide followed the same pattern as before. 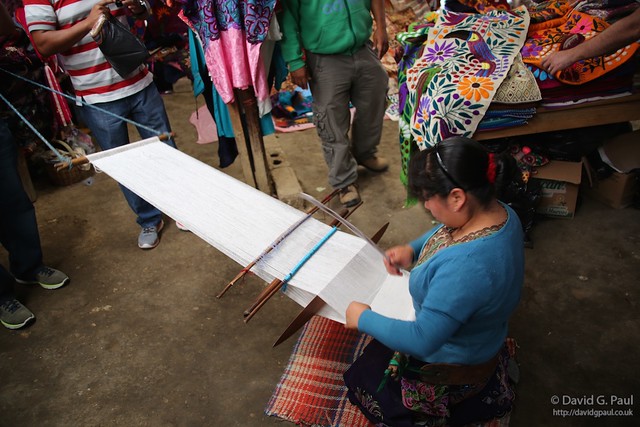 Even though it was only about 200 metres down the road, which we didn’t know at the time, we were all led back to the bus and then drove this distance down the road to a house. At this house the guide took it in turns to talk Spanish and English again and told us briefly about the clothes and other cotton products they make there. We were then given some time to look around the stalls they had in the back before going through to another room where they were cooking tacos. 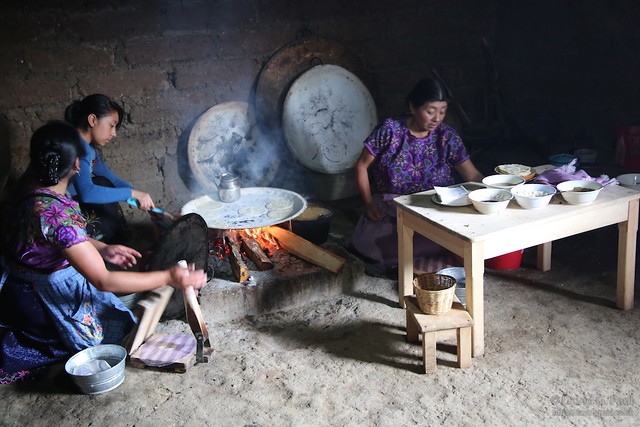 I’m not entirely sure what it was they had in the bowls for us to put in tacos – they didn’t speak English and I couldn’t remember any of the Spanish words to describe them when they were asked. It was nice of them to make us tacos for lunch, though I wasn’t overly fond of the filling as it was extremely dry and powdery. After we’d all finished we carried on around the back to where they had greenhouses for growing flowers and beans which they would sell to companies. Once our guide had finished eating his lunch we then went back to the bus and drove on, leaving Zinacantán behind us.

Our second and final destination was Chamula, another similar area that is dominated predominantly by the Tzotzil culture. This culture has stood up for itself for a long time – first it didn’t accept fealty to the Aztec Culture, and then it refused to be taken over by the Spanish during the conquest of the neighbouring areas. This area reportedly takes the law into it’s own hands and will beat and burn it’s criminals.

Again we were not allowed to take photographs inside the church, this time though we had to put our cameras away as well. Around the entrance to the church they had erected some scaffolding and were repainting the front. Inside the ground is covered in grass-like moss with some areas cleared where the locals were praying with lit candles. There were a lot of candles here – so many that it’s almost amazing that the grass inside that litters the stone floors has not been burnt.

Once our guide had finished speaking in Spanish we rejoined him and he told us a little about the place in English. One comment he had was about how the locals consider the church to be a hospital and that everyone in this church would be here to pray for someone to be healed. It was quite a sight between those and the banners draped from the roof, it was quite a shame we couldn’t take photographs. 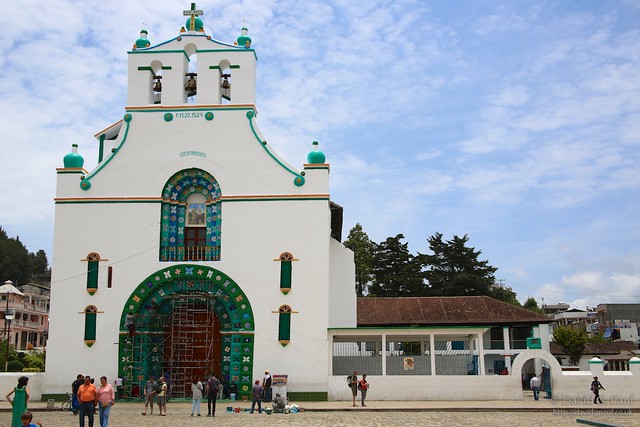 They don’t always pray themselves either, sometimes they will go to a person who will pray on their behalf – what was described to us as an expert, but one who does not like to be called a shamen. Apparently they find this very insulting, though I guess it would be the same as incorrectly calling a vicar a guru – a similar job, but a different belief. 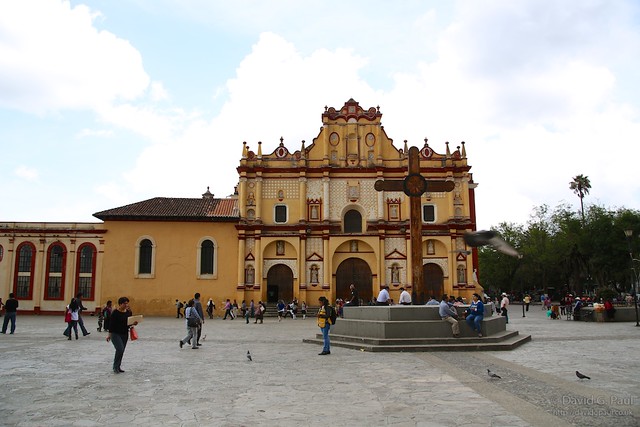 After a bit of time to take photographs outside we were then driven back to San Cristobal de las Casas and dropped off at the Zocalo at: 13:30, about 1 mile from the hotel. There was no choice in this, they were simply not dropping people off at their hotels. Whilst we were there we decided to look in the Santo Domingo Cathedral. Compared to the ones we’d seen in Mexico City, as with the ones we’d seen earlier this day, it seemed quite plain in comparison. 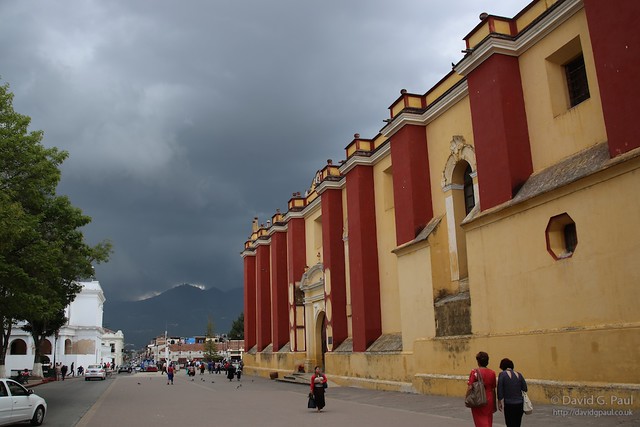 As we’d not really had lunch we stopped by a restaurant called Viavai where I had a ravioli dish that was quite nice. This was also served with some nice bread – more than we’d had toast at breakfast. Whilst around the Zocalo I also bought some extra supplies for the days ahead in case we would need to miss lunch again like we had the day before. As I knew we’d got a long drive the next day it seemed likely that having lunch with us would be a good idea.

On the way back to the hotel it was spitting with rain, but we looked in a few souvenir shops and I bought a wooden mask for 220 pesos. By this time the rain had stopped so we carried on up the hill to the church we’d passed the day before. This time though we climbed the steep stairs up to it and had a quick look around. 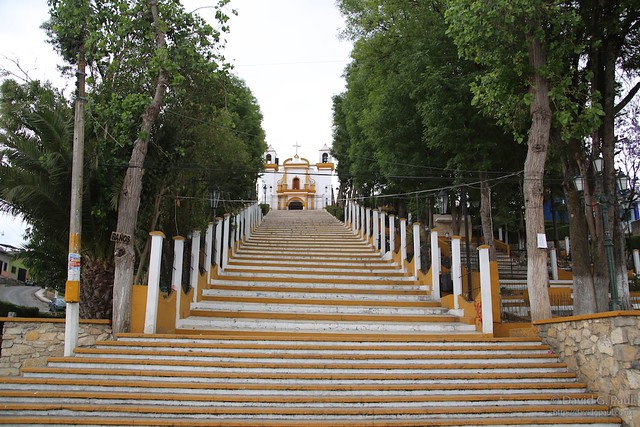 Back at the hotel I changed into my running kit and went for a short and slow 2 mile run around the area. As we were at an average height of 2,200 metres above sea level I knew that it would be harder work than normal and as I’d not run for several days either I didn’t want to push too hard. The route I took was straight down to the Zocalo, across, and then back up the hill to where the church was, across, and back down to the hotel. A nice easy route which I couldn’t possibly get lost on, though with the church as a high up landmark it would have been difficult to!

After repacking my suitcase ready for the long journey we went out looking for somewhere to eat. For sometime we looked for the Grill restaurant we’d passed the night before, but couldn’t find it. Instead we ate at Bugambilias where I had a rib-eye steak with home-made chips. It was actually one of the most filling meals we’d had on this trip even though it wasn’t really a local dish.

Our time exploring San Cristobal de las Casas was now over and in 10 hours we’d be on our way to Palenque, though first, sleep would be needed.