Our pickup was at 09:00 so we were up and going for breakfast at 07:15. The breakfast was the same as the day before, except they’d changed the juice options slightly – instead of cinnamon rice water they now had cucumber water. It didn’t really sound that appetising so I stuck with the orange squash.

The guide met us outside the hotel (we didn’t realise he’d arrived as we were waiting in the lobby) and then set out driving north for the day’s tour. This started with the Plaza de las Tres Culturas – our guide said this name comes from the buildings belonging to Aztec, Spanish and Russian cultures. However the third culture is supposedly not Russian as he had said, but belongs to the Mestizo nation (which is a Spanish word meaning people of mixed descent so could be any other culture). We never actually went in this place, instead we were taken to a fence where we could take pictures of it from instead. 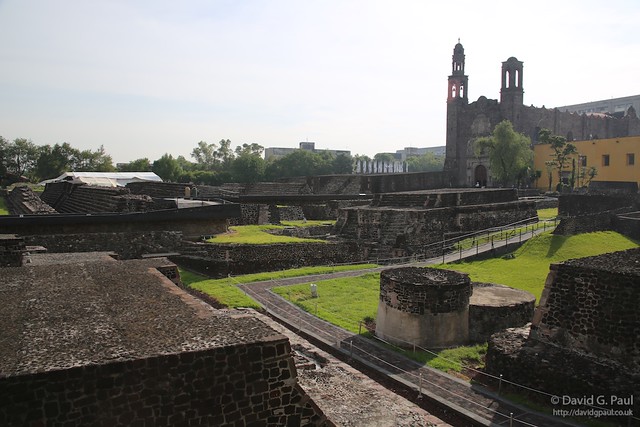 This seemed a bit rubbish and a bit cheap of the tour company to say this is included, but to then not actually go inside. On the other hand though, there may not have been enough inside the square to have warranted the company paying the cost or spending the extra time there.

The drive then continued for some time along a major road, passing numerous settlements, until we entered the area where Teotihuacán is located. The road along this last section is cobbled so is quite bumpy; we did stop briefly though to take our first photos of the pyramid structures.

We were then taken to a shop where they talked some more about the agave plant and it’s various uses before talking about the use of obsidian to produce tools and statues. To finish with they then shown us what they had for sale. This started to remind me of the experience in East Africa and in China, but I had a good look around the obsidian statues and masks and decided to get a small statue of the Mayan sun god, Kinich Ahau, for 600 pesos. 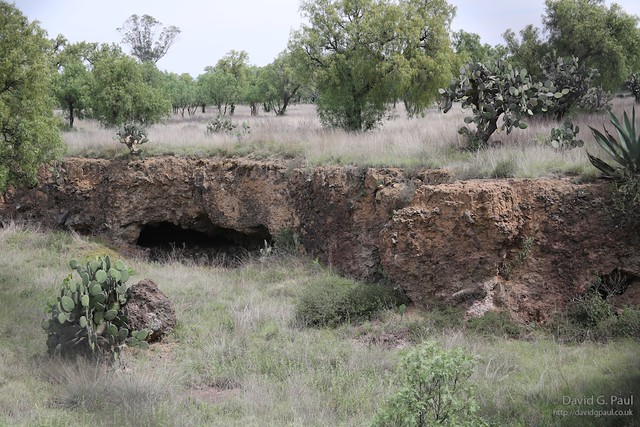 We then briefly stopped on the side of the road again alongside a fence where you could see some caves underneath some of the ground there. We were told that they were once cave dwellings and some of the earliest examples of them in Mexico.

Our next stop was to finally see Teotihuacán up close. It was a short walk from the car park to the first of the pyramids and during this walk we could hear the constant drum of fireworks from a nearby village and could see fairly large red ants scurrying along the floor alongside the path. Once we reached the pyramids our guide advised us what there was to see and told us he’d meet us at the crossroads in two hours. Seemed fair enough. 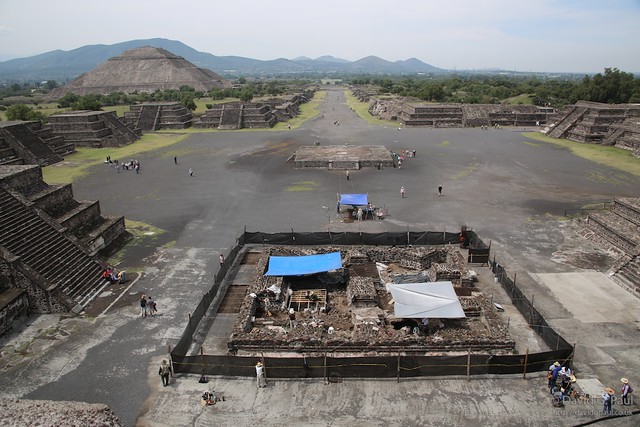 It is not known who built the city of Teotihuacán – it was once thought to be the Toltec civilisation however with it beginning construction in 100 BC it was far too early to be from them. It is known however that the Nahuatl word “toltec” also means “master craftsman” so does not necessarily refer to that civilisation. The current name for this city was given to it by the Aztecs, a culture which were likely to have been influenced by what they saw here. One popular theory about it’s downfall is that famine and drought led to an uprising which caused the temples and pyramids to be burnt by the lower classes.

We made our way to the Pyramid of the Moon to start with – it was the smaller of the two large pyramids there and is situated at the end of the Avenue of the Dead. In front of this pyramid they were doing some excavations in the Plaza of the Pyramid of the Moon, and had an area marked out ready for further trenches to be dug. The stairs up the pyramid are fairly steep so they have a handrail for those that are not that steady on their feet or unsure about the height. I ran up them though and started to take photos looking back at the avenue and the Pyramid of the Sun. We couldn’t get to the very top of this pyramid though as they are still doing some restoration work to make it safe for tourists. 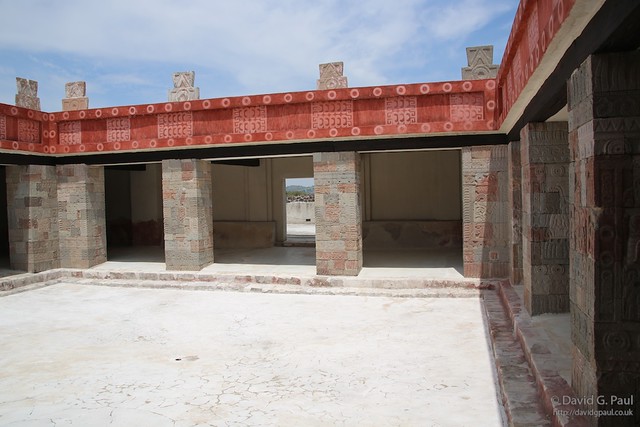 After descending we made our way over to the Palace of the Jaguars and the Palace of Quetzalpapalotl via a plinth in the middle of the plaza. In the Palace of the Jaguars some of the walls which were painted still retain their colour, though I don’t know how much of that is restoration as opposed to what was originally there. At the top of the raised area there were also a few lizards (real ones, not stone!) in amongst the bricks. 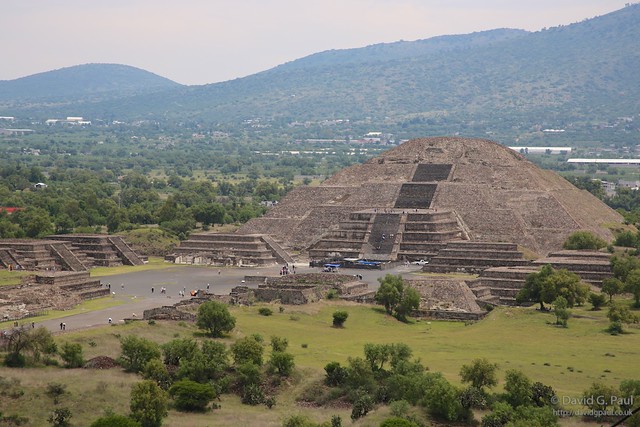 We then walked down the Avenue of the Dead and stopped at the Pyramid of the Sun. This one was far taller than the Pyramid of the Moon and looked like it would take far more effort to climb. After so many steps there was a platform you could walk around and this was repeated until the pinnacle of the pyramid. The steps varied in steepness, but they were still reasonably hard work (probably more than normal as we were already at altitude). After some time had passed, we reached the top of the pyramid and I found something odd – there were many large black butterflies flying around – something we hadn’t seen anywhere else in Teotihuacán. 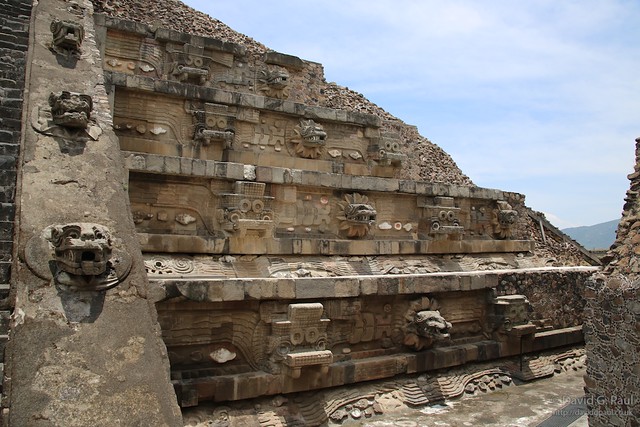 After we had finished taking photographs we descended the pyramid, slower than we’d climbed it, and made our way around the side of it to where the museum is located. We didn’t go in, but followed the path around until it eventually made it’s way back to a crossroads at the Avenue of the Dead. By this point the sun had come out and it was starting to get noticeably warm.

After sitting at the top of one of the sunken terraces for a while, we were unsure exactly which crossroads it was that we were meant to meet up at. We then continued walking along the Avenue of the Dead and eventually we reached it’s end and found our guide sitting under a tree. He advised us to climb to the Temple of Quetzalcoatl. This one whilst being structurally the same as many of the other pyramids, it was decorated with heads along each level as well as carvings of snakes. This was far more like the style I was hoping to see during this trip to Mexico and was worth the climb in the heat to get there. 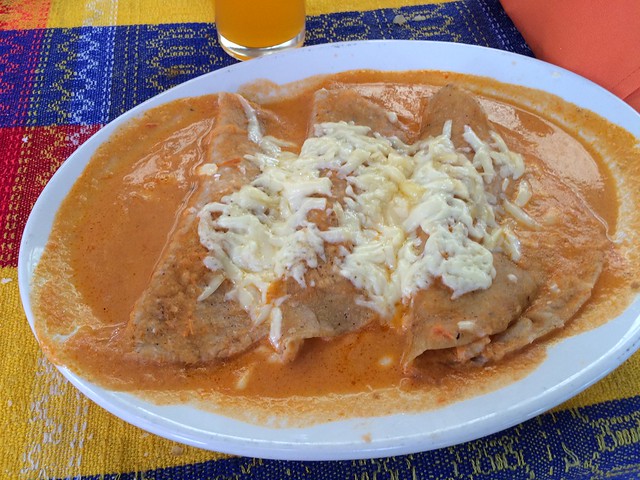 We then exited the UNESCO World Heritage Site of Teotihuacán through a market area and continued on to a place for food. Our guide advised us to try one of the cactus based foods however neither of us did – I tried enchiladas for the first time, whilst my friend went with tacos. They also brought a hot sauce to the table and the guide thought me crazy for scooping a large portion of it onto a tortilla, but it’s level of spiciness wasn’t too bad – I could handle it anyway. The enchiladas weren’t that great as they were very greasy and were drowned in the sauce.

The journey back to Mexico City took some time, and was delayed slightly as the overturned oil tanker we’d seen earlier on the way was still on it’s side and was now causing traffic delays. Eventually though we made it back to the city and visited our last stop for the day – Basílica de nuestra de Guadalupe. 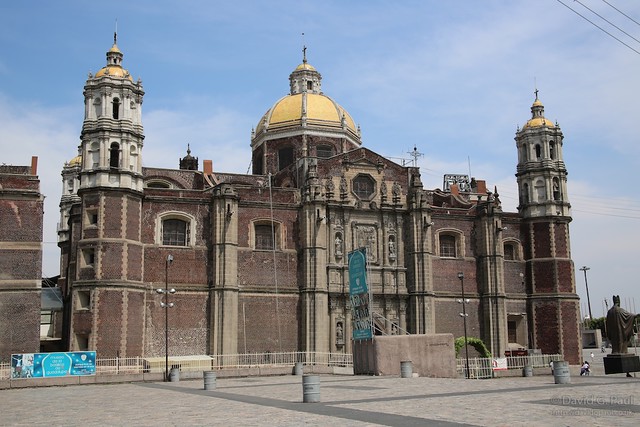 When we arrived near the cathedral we noticed how much warmer the weather had gotten, and that we were now both starting to look red with sunburn. The guide ignored this though and made us stand in the middle of the plaza whilst he talked about the subsidence of the old church causing them to have to physically split the building up. There is also a new Basílica de nuestra de Guadalupe there with a very modern design which apparently is always very busy (the busiest in the world according to our guide). It didn’t seem that busy at the time though. 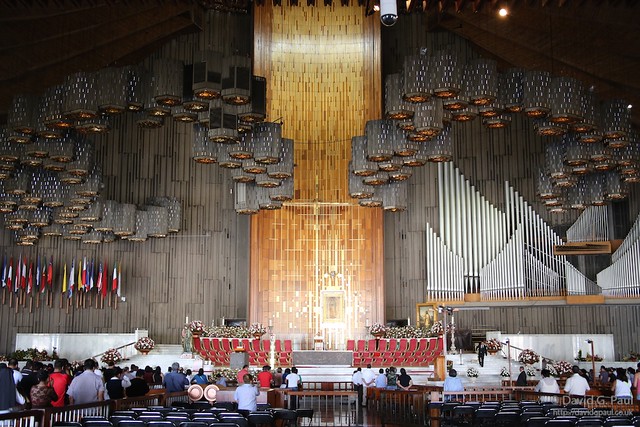 Eventually our guide moved into the shade before telling us the story of the church of Guadalupe and it’s significance. We were then advised to walk around the plaza and to take a look inside the old church. We wandered around and photographed several of the surrounding buildings before going inside the church, but it wasn’t really that impressive.

We were then led by the guide once more and taken through a shopping area that only sold Catholic items and then headed back to the hotel for the end of the tour. By the time we got back to the hotel it was 17:00 so we relaxed for a bit instead of going for a walk, and then around 19:00 headed out to get an evening meal. We had decided we would return to the same place as the night before, Sanborn’s Cafe, as the food there was good.

For this evenings meal I decided as I’d already eaten traditional Mexican food once today I’d go for something else – Fillet Mignon. This was quite nice, though there wasn’t that much to it. Unlike the previous night, this time they brought out bread rolls and tortillas to eat with the meal – something we’d later find out to be a staple of Mexican meals, alongside refried beans.

Whilst we ate the thunderstorms for the day had arrived, earlier than the previous night, so it meant a mad dash back to the hotel after the meal. This was via the Oxxo shop though as it was an opportunity to get something to eat for later in the week when one of the days wouldn’t have the option for getting lunch.

Back at the hotel we ate some birthday cake I had brought with me and then prepared our suitcases for flying.