It had been a busy few weeks – after months of training I had just finished the Virgin Money London Marathon, the week after that I had done the Great Birmingham 10K, and the day before flying was my birthday. It hadn’t left much time for any last minute packing or planning, I’d had to pack what I could whenever I got the chance to.

For this adventure I’d be flying from London Heathrow, so it meant a two hour drive to the airport before a flight to Toronto where I’d meet up with a friend before continuing on to Mexico City. On the flight to Toronto there was a warm meal to start with – either pasta or salmon, so I went with the pasta option whilst watching “Interstellar” on the in-flight entertainment system. I then chose to watch a second film called “Wild” to take up a good portion of the remaining flight time. During the second film they brought around more drinks and pretzels and then two hours before the flight was due to land brought around a Chicken fajita pastry. The plane finally touched down in Toronto Pearson airport at 22:45 BST (17:45 local time).

As I’d be in transit when arriving in Canada I wasn’t entirely sure if I needed to fill in their immigration card or not. Regardless, I filled it in and handed it over at the passport control on my way to the departure lounge for the connecting flight. At the gate I met up with James, the friend who had emigrated to Canada the previous year. After a while we looked around for a place to eat – whilst he got a sandwich I bought a CA$2.70 packet of crisps. Before long we were aboard a every empty flight, possibly one of the emptiest I’ve been on, and were on our way to Mexico City for the start of our tour. 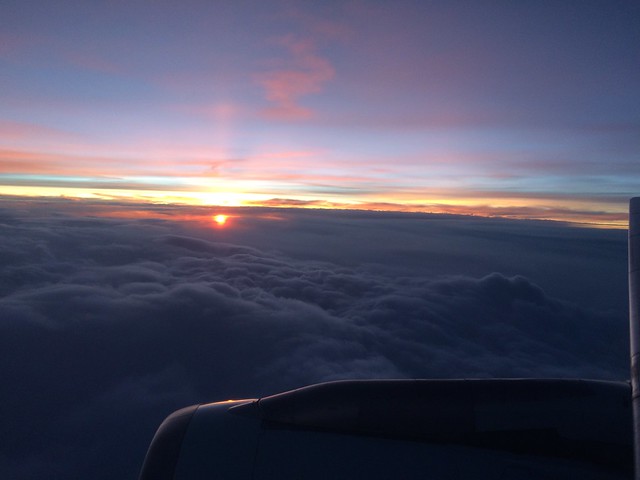 During this last leg of the journey I watched another film, “Project Almanac”, however it turned out the last 20 minutes of the airline’s recording was faulty. We landed in Mexico City at 23:45 and made it off the plane and to the luggage carousel in record time. By the time our luggage arrived and we were in the taxi to the hotel it was already 00:25. Fortunately it was only a 20 minute drive to the Hotel Fontan, and along the drive we were shown that the proximity of 24hr restuarants and shops was pretty good. At last, it was time to rest.