We were hopeful that today would be the day we would see an amazing aurora display. Seeing a sunrise gave us even more hope that the skies would clear. I was up at 08:00 and photographing the sunrise, but headed in before the reindeer herder passed in order to get a cup of tea. He wasn’t with any reindeer, and didn’t stop so I didn’t miss anything. 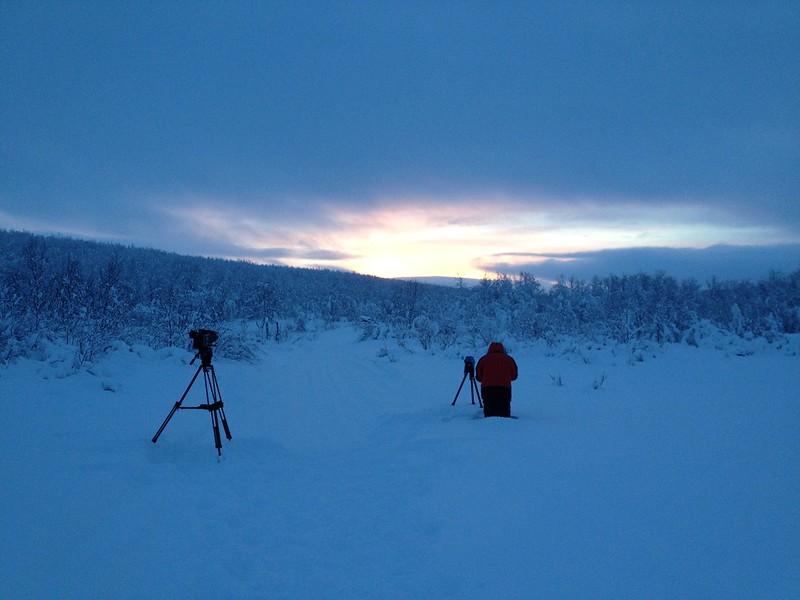 Breakfast was similar to the previous days and again included omelette. After breakfast we had to clear out the hallway of the sleeping cabin and move luggage out of the equipment room ready for the incoming husky team. 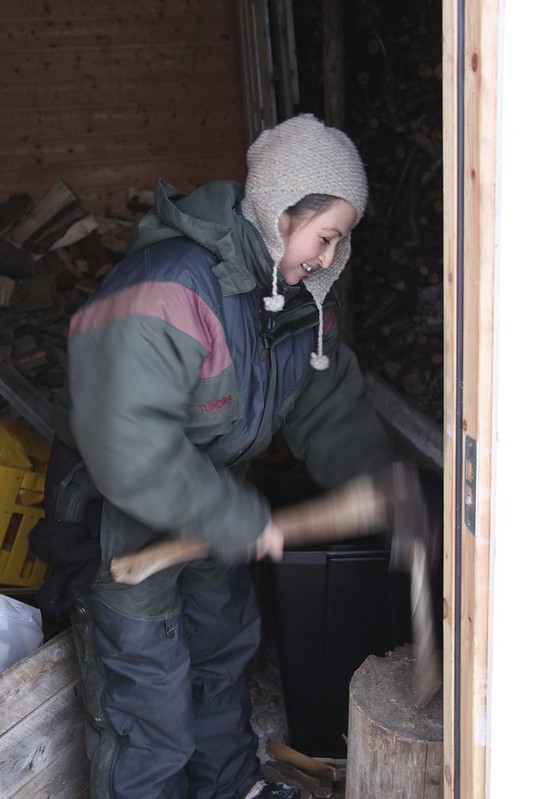 After taking a few photos I went over to where Gabriella, one of the Mexican girls, was chopping some wood. After chatting for a while I took a photo or two of the wood being cut and then got to have a go with the axe myself.

Just moments after this I then had a quick lesson on a snow scooter and afterwards got to take it out on my own. It was amazing fun, and after a while I found I was getting the hang of it. As the handlebars are heated I actually had to loosen a few layers to avoid overheating. To start with I was only leaning from side to side and forwards on the turns but I soon found myself standing to see the track better. Afterwards I was told I’d done pretty well at driving it so was quite pleased with that. 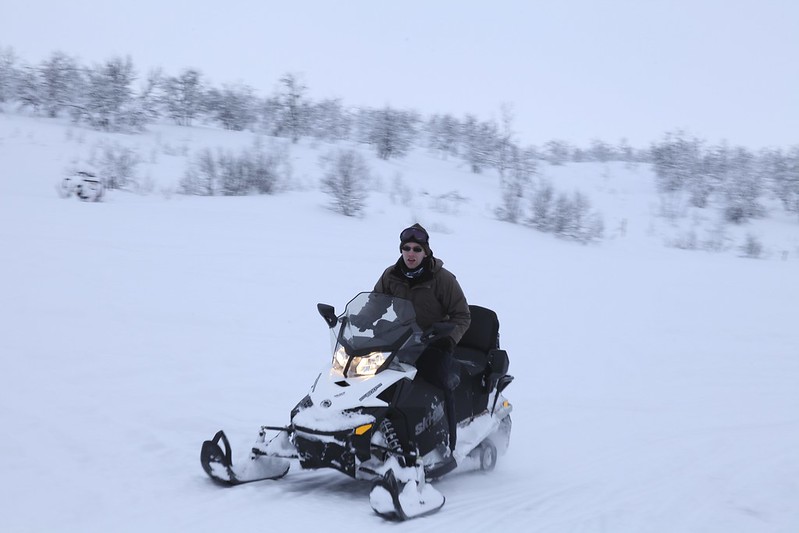 For the midday meal we went into Oskar’s lavvu, a kind of tent with a hole in the top and a fire to cook food in. We all bundled into the lavvu and sat on reindeer skins to stay dry. We were then handed sticks to cook pieces of reindeer meat with over the fire. When I say cook, it was technically reheating as the reindeer meat had been smoked in the hut a few months ago. 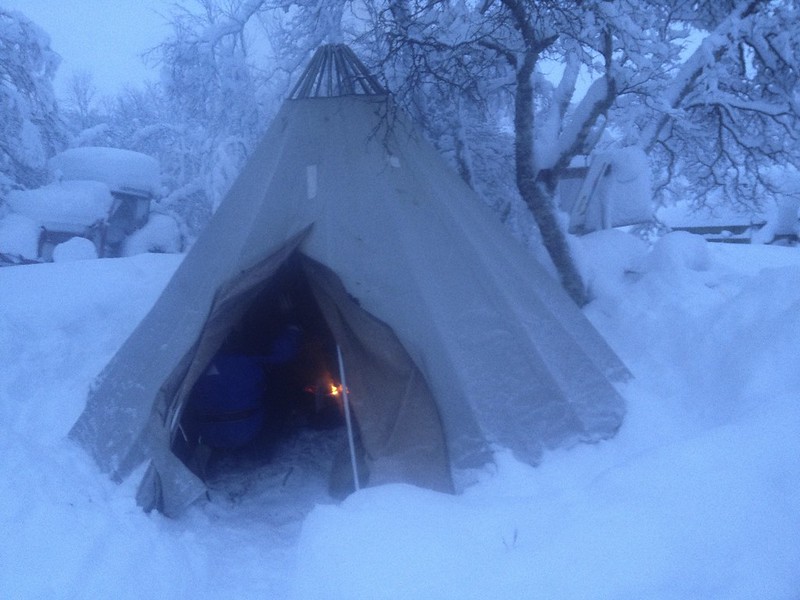 As we cooked our own reindeer, Oskar used a frying pan and a lot of butter to cook more meat. The meat was delicious and it was a great experience to just sit there cooking the meat to the level you wanted it. I did end up with some glowing embers on one of my pieces of reindeer amusingly. The scraps of fat or meat we didn’t eat would be discarded on the floor in front of us for the local fox to eat. It was very greasy to eat meat with your hands, but you could clean your hands off in the snow. 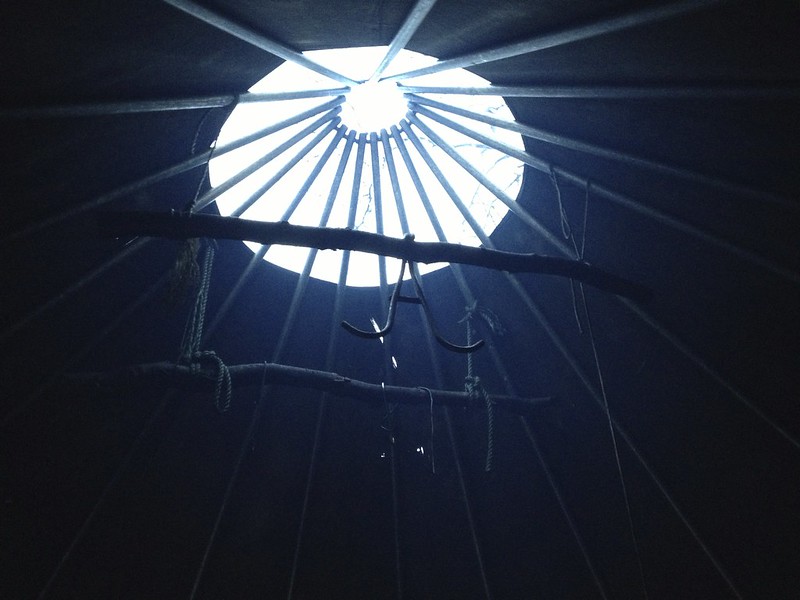 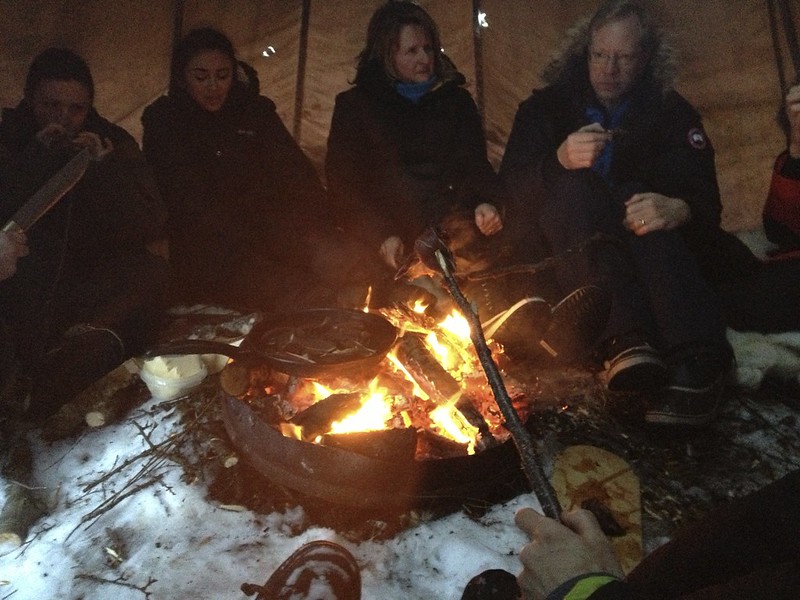 Afterwards we went back to the communal hut to review photos, but as we did so the husky dog team turned up. As we’d brought our cameras into the warmth we couldn’t take any pictures due to the sensors on the cameras misting up. By the time it had demisted it was impossible to get a long range photograph without a tripod due to the low light conditions. I decided it would better to photograph them early the next morning before heading back to Tromsø. 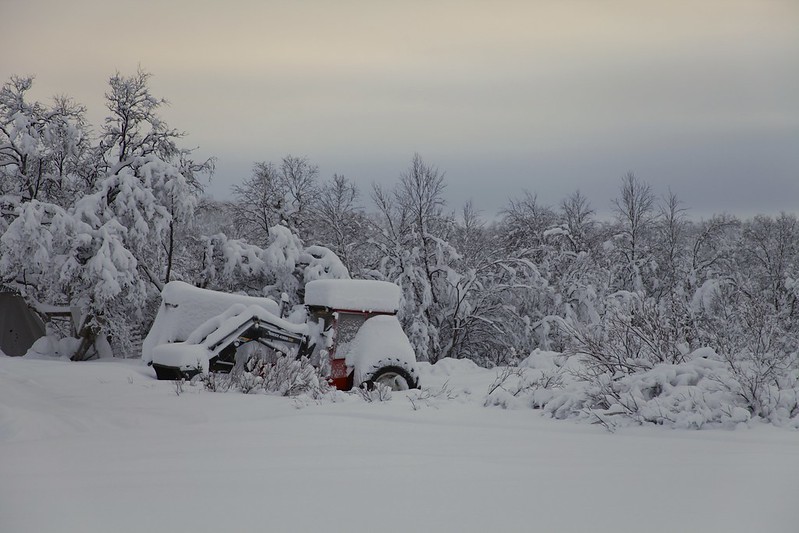 For the next couple of hours we lounged around having drinks in the communal hut. After everyone had gone I stayed to read for awhile. Apparently our sleeping hut was busy and packed due to the husky team cooking food for themselves and for their dogs as they’d moved into the spare room and one of the their huts. They also had a house dog (not another husky) which wasn’t part of the husky pack that they had in the hut until it got too warm for it. It was a lot warmer in there now it was full. 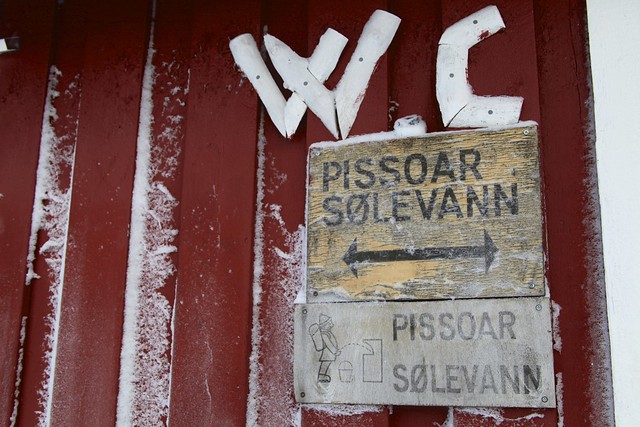 Just as the evening meal was being served I headed back to the hut to drop of my spare camera lenses. As the evening meal was salmon, which I don’t like, Oskar warmed up some elk leftovers for me and we all had carrots and potatoes. For dessert we had cream and cloudberries which were a little like raspberries. Cloudberries are a fruit that grow close to the ground and are picked around August time.

The weather wasn’t looking good so people hung around in the communal hut talking, eating crisps, drinking, and playing cards. The pattern in the weather was looking promising though and we thought the cloud might clear enough by midnight. As the night went on we eventually stopped playing cards and decided the aurora borealis would not be visible that night. We did stay up late though on the off chance that we might see something, but it was for nothing. Instead I packed my suitcase, not very well, ready for the journey back the next day.