At 01:00 we got the alert that the aurora had been sighted. I’d not long fallen asleep but I still leapt from the top bunk and got kitted up as quickly as possible. By the time I’d gotten outside it was cloudy, but only a light cloud. Standing around for a while the aurora borealis made an appearance as a very fiently glowing arc across the sky. Over the next couple of hours we moved all over the camp taking photos and experimenting with settings, trying to get the best shot we could. By 03:00 the aurora was once again hidden meaning it was time to sleep. Sadly I don’t think any of my shots from this session were particularly good.

After a long night I was still up at 09:00, though it took a while for the others to wake. By 10:00 we were all across to the other hut to get breakfast. With all the talking we didn’t finish breakfast until 10:50, so not many hours of daylight left. Just 30 minutes later we were out on the scooters heading to one of the frozen lakes for some ice fishing. It wasn’t that long a journey and when we got there we found the snow was very deep, everywhere you stepped you’d sink through to slush. 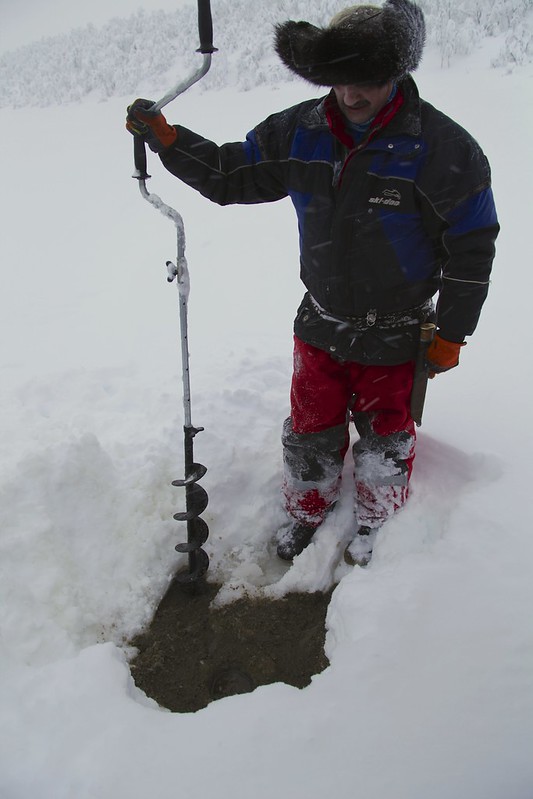 Oskar then get out a drill and started to make a hole in the ground. At one point he had to remove it and take his knife out to clear the ice. Eventually he got through the slush, but instead of clear water there was muddy coloured water pouring through indicating that the ice extended down to the silt so there would be no fish. Alister and Oskar took the scooters back to land to turn around but one of them got stuck so we had to walk across the lake to help push it out.

On the way back we took another stop, but it was the same story again with nothing but slush. There was another lake with deeper water but with 2 metre deep snow the scooters weren’t going to manage it. If we’d tried we’d have run the risk of getting them stuck and that would have been dangerous as they’d then have got snowed in and would leave us stranded. Instead we headed back to the cabin and wasted some time before lunch.

For a while I wandered around the area to get some pictures and went over for lunch at 14:00. At this time we were told it was unlikely we’d see any activity that night, but it was also sauna night and apparently the aurora has a habit of being good that night. Once again the meal was fish which meant all I could eat was a cheese sandwich. For the next few hours I hung around in the communal hut as it had already gotten dark and was still snowing. All we could do was wait.

The weather report was showing the clouds clearing from 16:00 tomorrow after more snow and the solar activity reports indicated there could be a good display. We were told that if we were up until 05:00 the following morning we’d be unable to take the route back through the fjords due to it being a 9 hour journey. Instead, if this was to be the case, we’d need to head back the way we came.

The evening meal was elk leg and reindeer leg with potatoes and carrots. Once again the reindeer was really nice, though I wasn’t too keen on picking out the bone marrow to eat – I didn’t like its taste. This time people didn’t stick around too long as the meal started at 19:00 and the sauna night was going to start at 21:00. 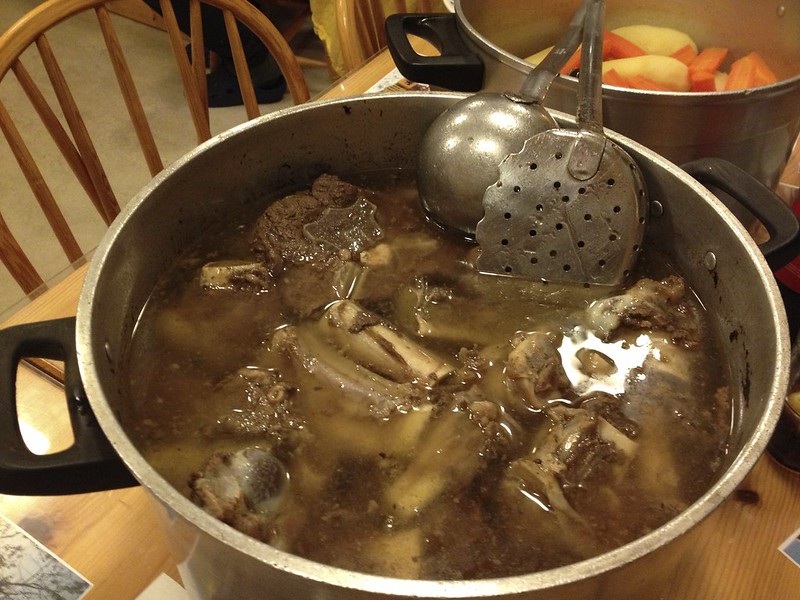 For the sauna you change into swimming trunks (optional), put on snow boots and coat and then head out into the cold. The sauna is just past the communal hut down a slight hill, but you can get there before you start to feel cold. The doors for this are like other huts where you have two doors at the entrance way to have a hall that acts a little like an airlock. There is then a changing room with a stove to keep the outer room warm, and then there is a second room which is the actual sauna. In this room there isn’t as much space, but there are two shelves so you can roast at different temperatures. 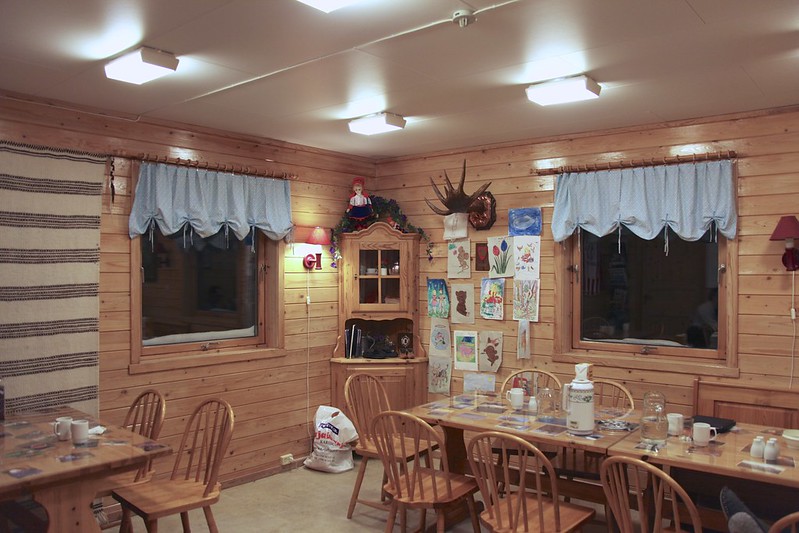 You then stay in there, sweating, until you can’t take the heat any more (or have had enough) and then runout into the snow and roll in it. First time you do that you’ll find yourself running back to the sauna to get warm again. We also had a couple of barrels of water we could use to drink or pour on us which meant it was possible to wash your hair. By the time I was done I’d repeated this four times and was the second to last person to leave. The temperature at this time was over 80C.

Once done you just get dried and walk out into the snow. You don’t feel the cold though because the heat eventually raises your core body temperature so you have a while. After this I headed back tithe communal hut for a drink before calling it a night at 00:00. There was no sign of the northern lights so it was a good choice.