The final leg of our journey was only 4 hours, but still plenty of time to see a film or two and have breakfast (if you can call it that).

The Chennai airport is pretty much the polar opposite of Dubai – it looks like it’s half finished in places, and in most places looks like it had seen better days. Out the window whilst queuing through customs I saw something scurry along the wooden scaffolding; however I’m not 100% certain whether it was a lizard or a rat. The queue to get through customs was so slow it would do England proud. Maybe long, slow queues is something we exported to them when they forcibly joined the then British Empire. 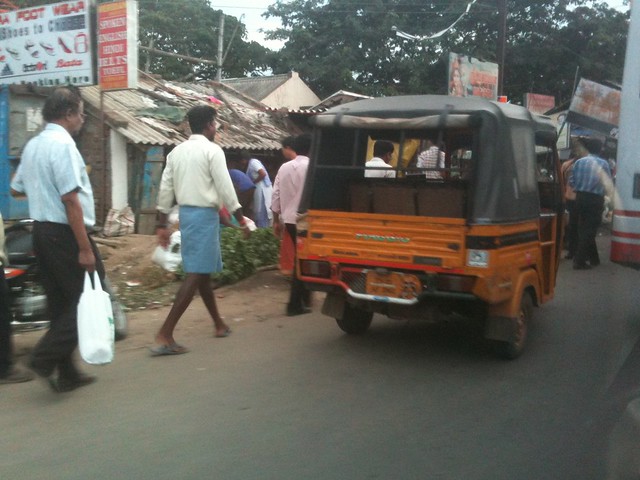 When we stepped outside the airport it was instantly obvious that the city had a high level of humidity, probably something to do with it being monsoon season. It was nice and easy to then find our Taxi driver who in turn led us to a nice air-conditioned car. The drive from the airport to the hotel lasted about an hour and reminded me a lot of other places I’d seen previously, particularly Cairo. It was such a varied sight – some buildings were made from pieces of wood, whilst others closest to the hotel in the new IT zone were tall and elegant. 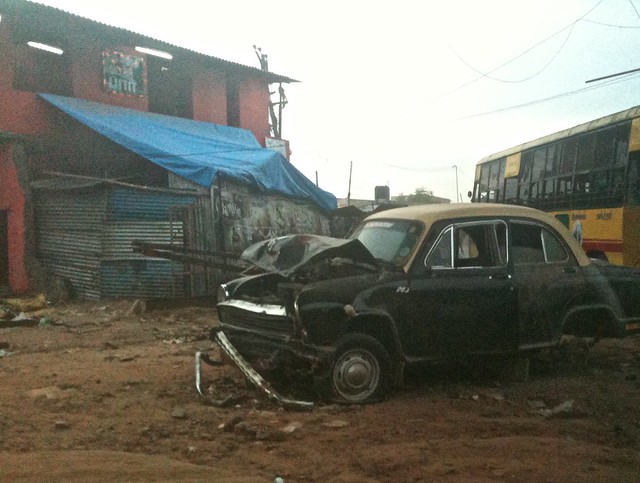 There was such a variety in between though as well; buildings that were half finished, and others that had been half pulled down. Rubbish littered the streets and roads, whilst cows and goats roamed freely with the wild traffic swerving in and out of other cars and avoiding the animals and pedestrians. With the exception of the animals that description could easily have fitted cities in other third-world countries such as areas of Peru (most notably the area around Puno) and the aforementioned Cairo in Egypt. There is also the constant sound of horns blaring – this is not meant offensively, but more as a general warning to other drivers that you’re coming through or a warning if they’ve not seen you. It was also interesting to see Tuc-tucs in abundance, although in Chennai they’re known as “auto-rickshaws” due to them essentially being an automobile version of a rickshaw.

The hotel, Quality Inn Sabari Classic, isn’t a bad looking place and all vehicles that go up onto their secure drive are checked for bombs with no exceptions. This check consists of a mirror on wheels which is put under the car in various places and then the boot of the vehicle being opened to allow them to check inside. The rooms themselves are pretty much what you’d expect of hotels such as Holiday Inn and actually look very similar in décor and facilities.

It turned out our taxi driver was booked for a day so we all went back outside after having changed so we could be driven around Chennai to take in some of the sights that the city has to offer. The first stop was about 30km outside of the built-up area and was a place called “The Bank” where they breed crocodiles for export to the rest of the world. Unfortunately the one day that place is closed is Monday, which also happened to be the day we were there. Unfortunate, but there were still over sights we could go and see. Instead we continued on into a slightly more “touristy” type area where there were the local-made goods you’d expect to see in a tourist area. 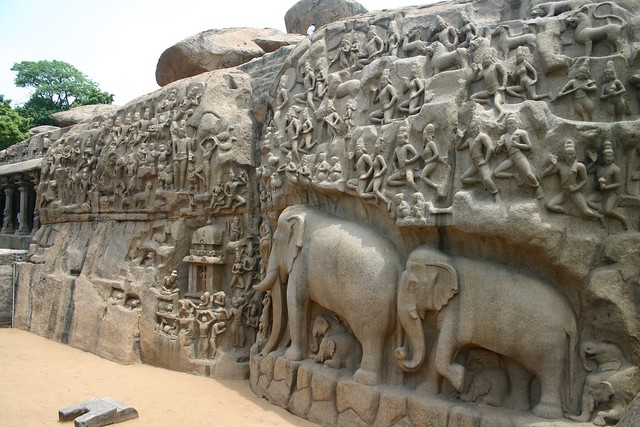 The entire focus of Mahabalipuram was around a series of temples carved into the stone and an impressive relief. We were of course hassled by many people wanting to sell their wares or their services as a guide. One person we said “no” to decided they wanted to follow us anyway which I knew would get awkward once we’d finished. I did comment on this to the colleagues I’d travelled with, though they didn’t seem bothered by this. 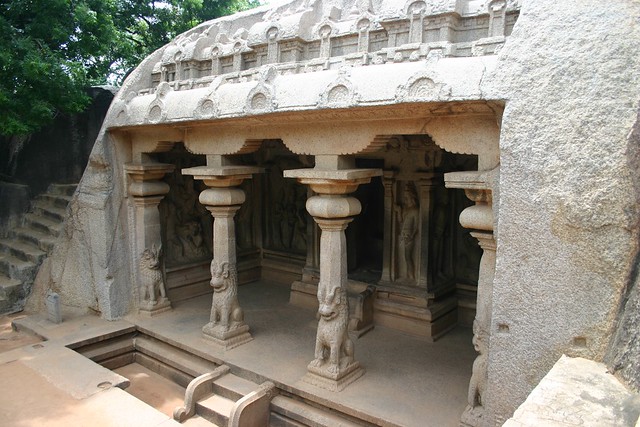 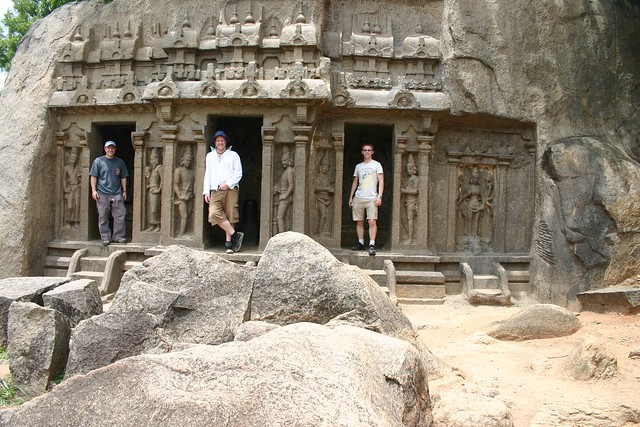 Some of the temples are really impressive because of the level of detail and the scale that has gone into some of them. For me the highlight of this was whilst looking round the area we came across a number of monkeys that were living in the wild there. For a while I crouched taking photographs of a monkey whilst edging closer before I was alerted to the fact that there were many more just over the rocks at the side of me – sheltering under a tree. It was pretty amazing to also see them looking after a juvenile monkey that hadn’t even grown any fur yet. By the time we’d finished looking round these temples the lack of sleep and the heat made our decision for us – rather than seeing any more we headed back to the hotel for a shower. Unfortunately what we didn’t know was that there were more temples on the beach that were well worth seeing. 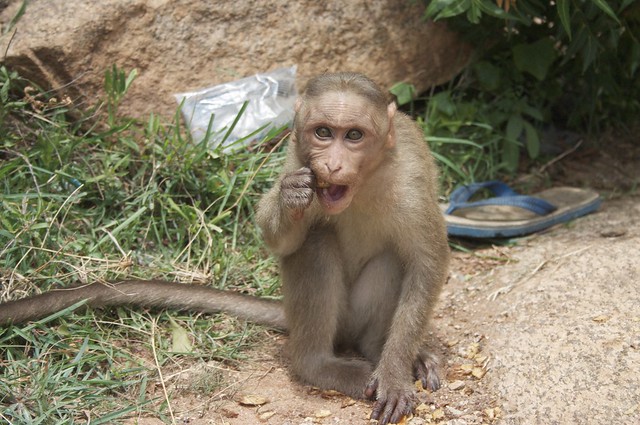 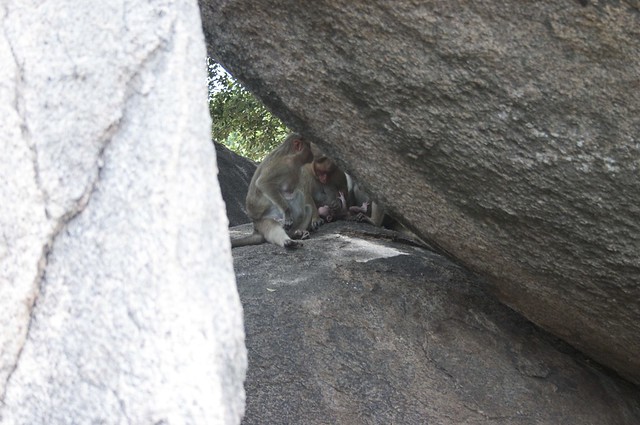 Back down in the reception of the hotel we each ordered a cake and a cup of tea, but the tea was the foulest tasting tea I had ever tasted. I thought at the time that the cheesy taste it had meant it was probably goat’s milk, but apparently it is cows milk just not processed in the way we’re used to. Apparently what they do is boil it instead of pasteurise it. 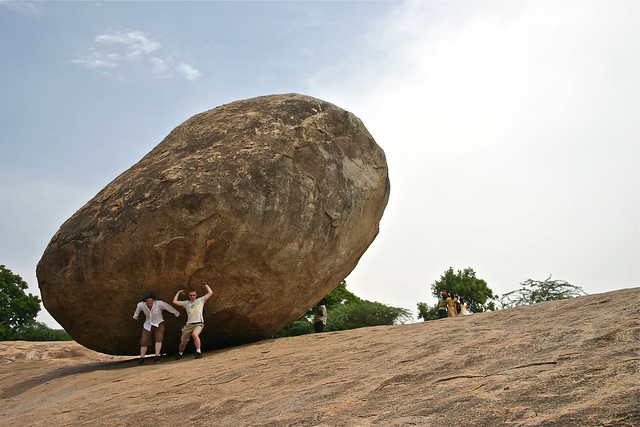 A short sleep later we were picked up by the company we’d travelled there to meet and taken to the MGM Beach Resort where we sampled various Indian dishes on a buffet whilst watching a heavy lightning storm light up the night sky. This beach resort backed onto the Indian Ocean at a place called Bay of Bengal, but the water is so strong there it is not safe to swim. A few years previous this whole area had been devastated by a tsunami but they’ve done an amazing job renovating the place. You can see places where they’re still working on rebuilding, but it is amazing what they’ve already achieved.

The food there was amazing, and even the locals found the foot so hot (as in spicy) that it was causing them to sweat. But we all dug in and enjoyed trying authentic Indian food, there were particular dishes that tasted absolutely amazing.

On the way back to the hotel we got to experience monsoon season a little closer as the rain pelted down so hard it was bouncing back up from the road surface by almost half a metre. After five minutes of heavy rain it disappeared as quickly as it had come, but a few minutes later it started again and continued at least until we reached Siruseri (one of the suburbs in Chennai).

Back at the hotel it was finally time to rest before the we started working for the remaining days.