Our first activity of the day was a climb to the summit of the Sydney harbour bridge through a company called BridgeClimb. It’s not a very long walk from Pitt Street to the harbour bridge and surprisingly it wasn’t that hard to find the entrance. 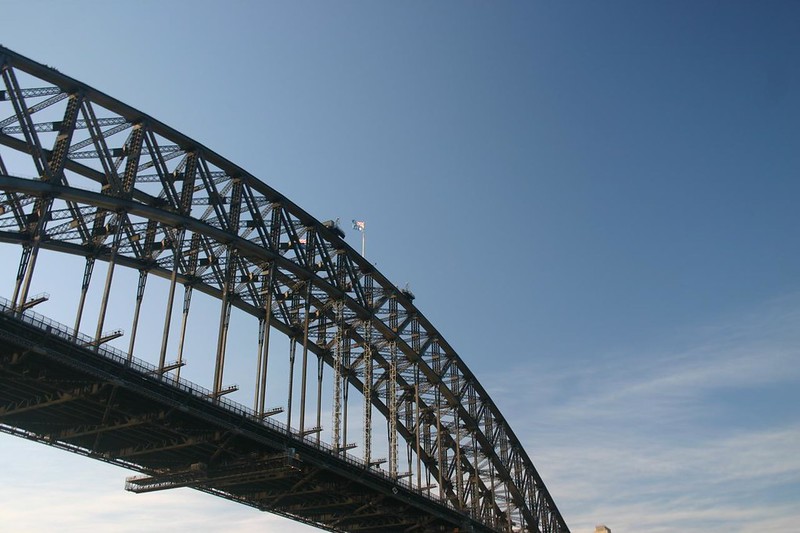 As we arrived early we were able to go on a slightly earlier climb at 8:45. The first thing you do is to fill in a form that declares yourself fit, and then you are breathalysed to make sure you’re not a danger to yourself or others. After this you are issued with a one-size-fits-all overall and told to remove everything from your pockets and that watches are also removed. If you want to wear sunglasses or prescription glasses then a strap for them is attached to the overalls before you go into the next room. In this next room you are issued with a belt with attachments for clipping onto the safety line and for stowing a radio. There is the a quick practice ascending and descending ladders similar to what can be found on the bridge.

Once everyone has been geared up you then walk into a room where you attach your belt to the safety line and begin your walk out onto the bridge. The first stretch runs underneath the bridge to the south pylon and at the time had a small diversion onto a temporary walkway due to work being done to remove the lead based paint that was corroding and to replace it with a fresh coating of paint.

After going through an area known as “the squeeze”, a narrow passage way you have to duck and climb over you finally get through the pylon and take a walk across “see-through” walkways to the ladders which lead up through the road surface and onto the outer shell of the bridge. Once there it is a steady walk over the arch to the summit. Along this trip there are various points where your photograph is taken and you are told about the history of the bridge.

Once we’d done the bridge climb we headed back to the Circular Quay station to get some food. One of the places there sold filled cobs at a decent price so got one with a chicken and cheese filling. Unfortunately it wasn’t the best of sandwiches as it contained bits of tomato, carrot and even a bit of bone. 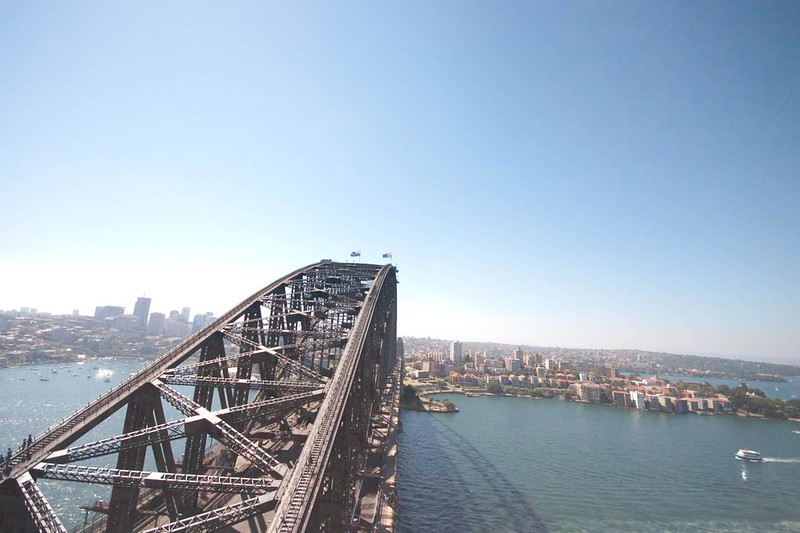 We then double backed to the bridge to find the pylon lookout. Sadly the road signs aren’t the best in Sydney as even outside BridgeClimb there was a sign for the place sending pedestrians in the opposite direction, just as there was for the Opera house. Eventually we found the pylon lookout and climbed the stairs to the top. We may not have been able to take our cameras on the bridge climb but here it was no problem. On the way up there ate exhibitions telling the story of the bridge’s construction and on the top floor there is a great view of the city. 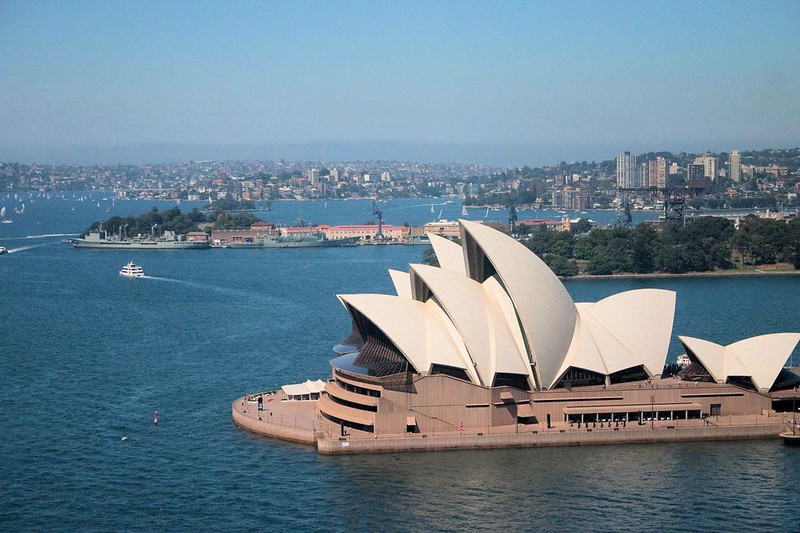 Following the Quayside around the edge we made our way to the Opera house. By this time the temperature had risen to the mid thirties (Celsius). The tour of the Opera house felt a little overpriced at AU$35 as you’re limited with what you can photograph due to the copyright of stages in the rooms, there only being 3 rooms on the tour, and it consisting mostly of video. The entire tour lasted for around an hour and has the option of including a badly photoshopped photo of your tour for an extra AU$10. The quality of the photo is bad enough to make me wonder how they ever manage to sell them. 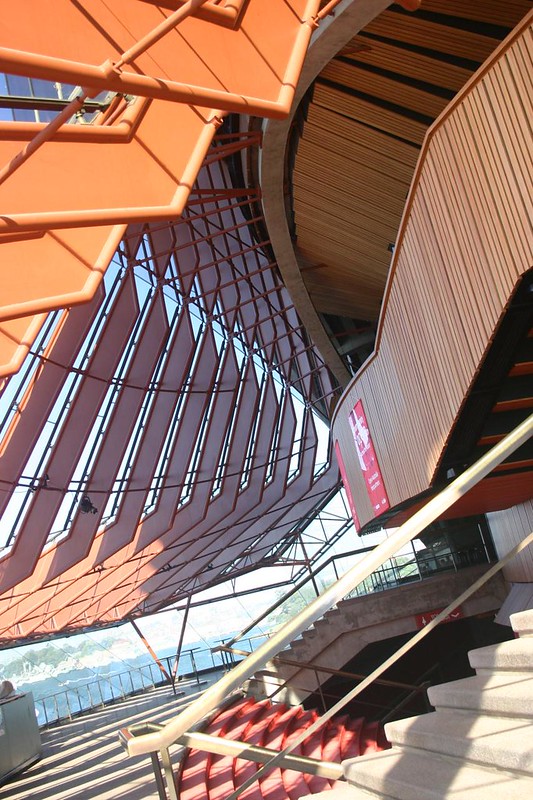 At the side of the world famous opera house are the Royal Botanical gardens. What is strange about these is it’s a public park on the waterfront which actually closes at 18:30. If it had been a place with an admission fee, or closer to sunset then it would have been understandable. It would have been nice to get a sunset shot of the opera house and bridge from there though.

For an evening meal we went to the Ice House, which is a worldwide franchise though in Sydney it does have seating which is not frozen. Nevertheless the service was a little shocking.

After 15 minutes of waiting our order was finally taken even though the restaurant was practically empty. Five minutes later the waitress came back to take my order again as she had forgotten what I wanted. Again I thought I’d go for a well done steak, and just over 45 minutes later we started to wonder where it was. Asking the waitress for an estimate of how long we’d need to wait she then returned with our meals as if they’d magically been finished that moment. My steak however was not cooked well done, and was not cooked as well as my friend’s medium steak. Their inability to cook steak properly and to keep it warm is pretty shocking. 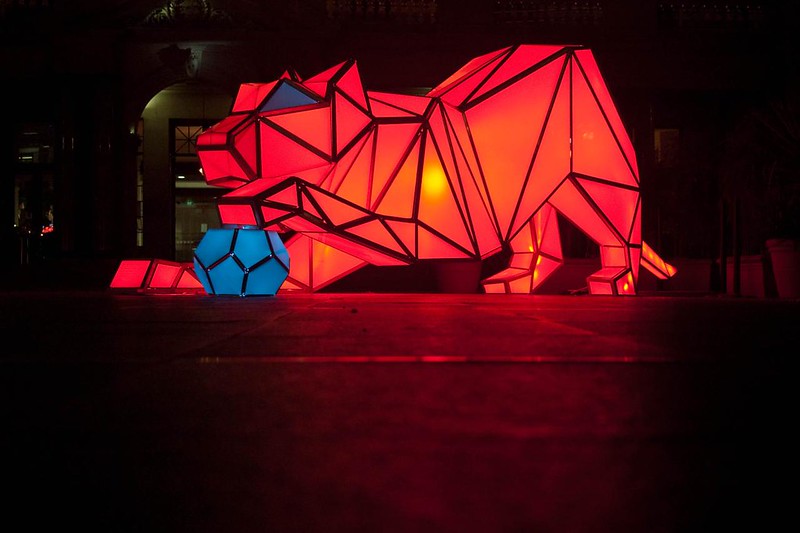