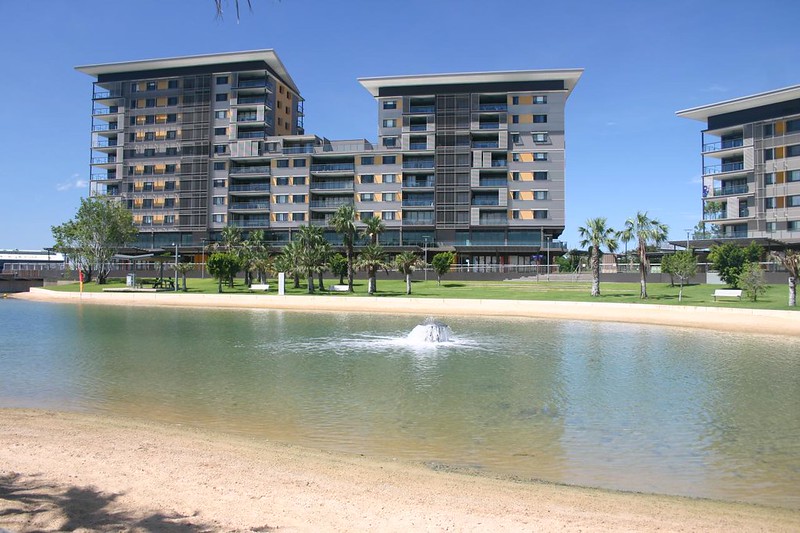 Finally there was another chance to sleep and on the sixth day it was good to feel totally awake again. For breakfast we ate at the hotel again and got ready to checkout. Annoyingly we were interrupted first by repairmen turning the lights off and on whilst we were trying to pack, and then a further interruption by cleaners. Leaving our luggage behind we then ventured out into the sauna-like heat to get some photos of the surrounding area and to make a visit to the shopping centre. The souvenir shops have a reasonable variety to chose from and don’t vary much in price. Most prices however are reasonable, such as t-shirts priced at AU$12.00. Sadly the supermarket didn’t sell ready-made sandwiches which meant we just had to get what we could. 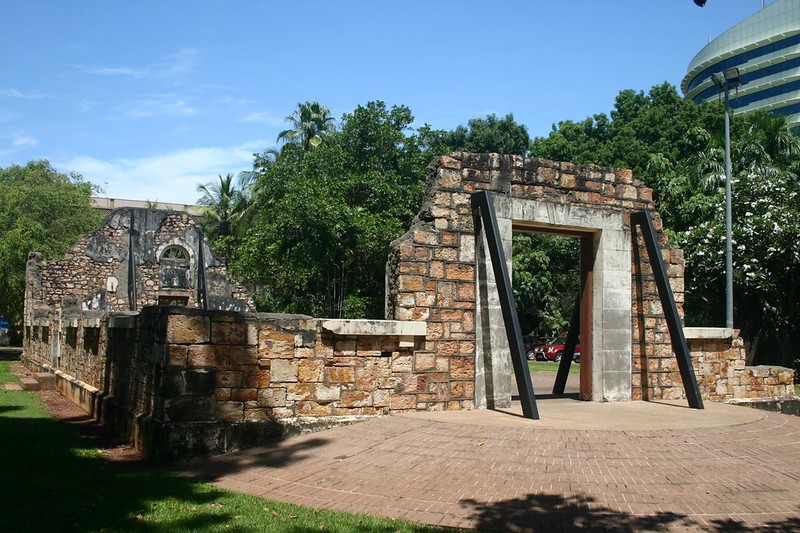 Top End Escapes picked us up from the Medina Vibe at 13:00 as planned and took us on a tour of the city. The tour took us all over the place and also explained some of it’s history including it’s time called Palmerston. Our first stop was the old Gaol which has been closed for many years, but mostly survived cyclone Tracy. The interior of the prison is split into separate buildings and look like something out of “The Great Escape”. 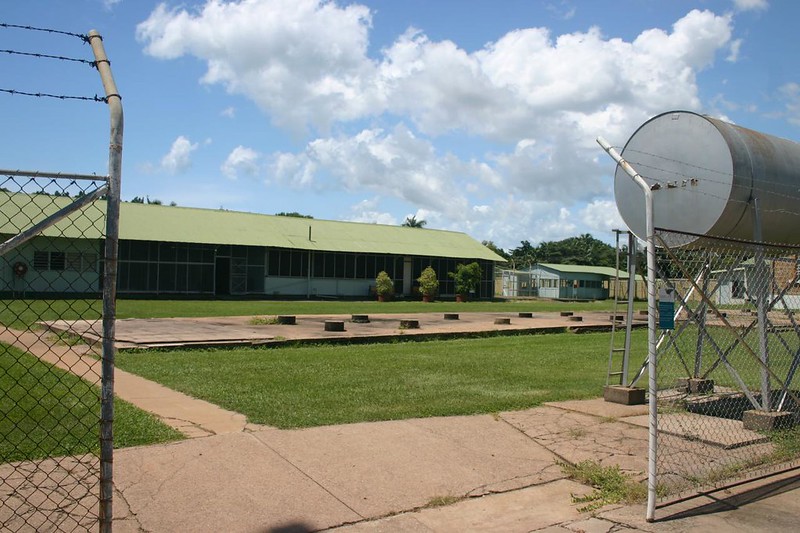 Apparently the last hanging to take place here was for a crime that started put as an accident but started a chain of events which caused them to receive the death penalty. The story goes that a couple of Europeans had a road accident that resulted in a death but they fled the scene and committed murder to steal a taxi and escape. Sadly the investigating officer concluded the initial offence was an accident and so would have been let off for it, but because of the events that followed they got the rope. By this time the Gaol was increased in size to include the hospital which was then converted into the gallows.

After some more driving around we stopped at the Darwin Museum where they had exhibits on wildlife, aboriginal art, maritime, and cyclone Tracy. One of the impressive sights here was the stuffed carcass of “Sweatheart”, the famously big crocodile who was reported as having attacked numerous fishing boats until it was accidentally killed because of it having been administered tranquilisers. What they didn’t realise was that in reptiles tranquilisers shut down the parts of their bodies which stop them from drowning in the water. The maritime museum exhibition was like an aircraft hangar with a raised walkway down the middle and steps either side. The heat was pretty unbearable; on one-side of the airlock into the hanger it was cool and air-conditioned, the otherwise was effectively a metal greenhouse – my camera lens even misted up at this point. 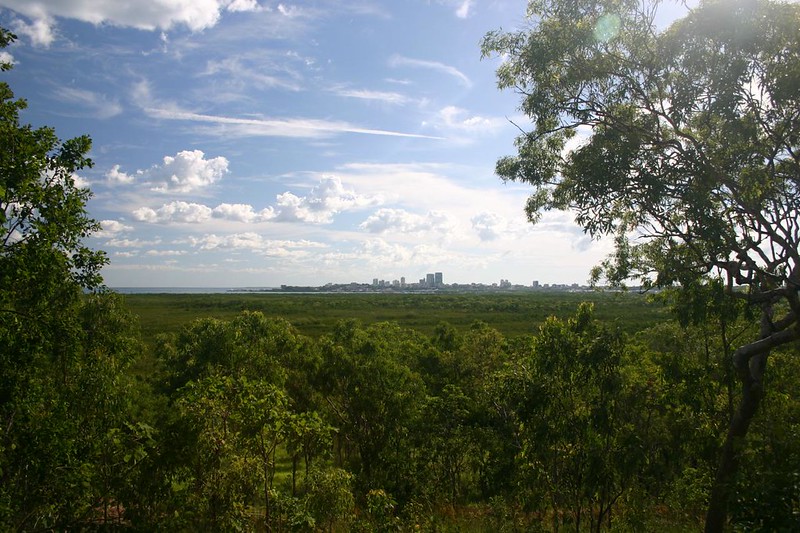 Darwin National Park is infested with more biting and stinging insects than you could imagine. It was a warm sunny day with free barbecue sites, but it was deserted. The reason for this is the locals know how many insects are about there and avoid it like the plague. Interestingly though the park was used by the military during World War II as an ammunition dump with camouflaged bunkers. Inside are old ammunition cases and other bits they’d expect to see in there. Apparently the example missiles in there are from the wrong era though. If you’re interested in military history it also has information on how the same ships that attacked pearl harbour then attacked Darwin in about 84 bombing runs.

The tour then concluded with a drive around the Wharf precinct with an explanation of how this was the cities newest development at a cost of around AU$1 billion. More proof that our suspicions of the Medina Vibe and surrounding area being very new were correct.

As the sun set we made our way up onto a Coastal road so we could get some pictures of the sunset. However we didn’t get there in time to get the best shots of it but we did see a bat fly past us low overhead which was a first for me. 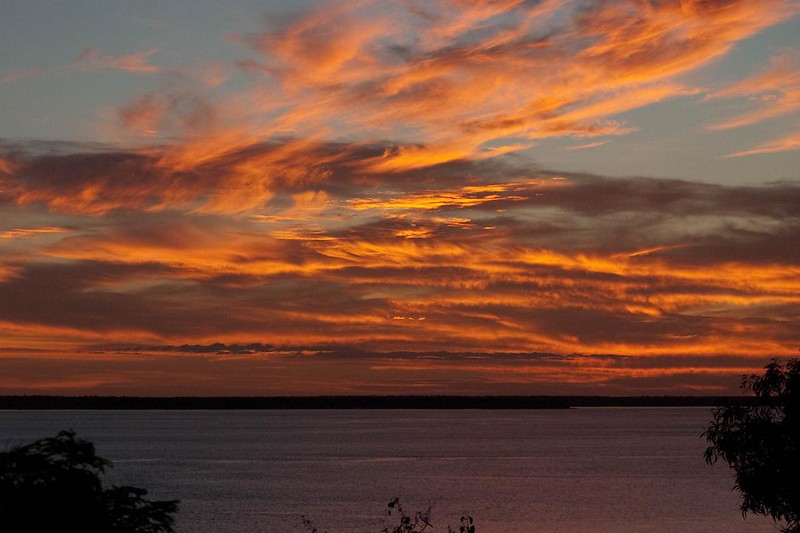 For an evening meal we went to a pub called Shenanigans as it was recommended by the tour operator. To our dismay it took an hour for our meal to arrive. After 30 minutes of waiting they tried to give us the bill for food we’d not yet been provided with. The waitress looked shocked and quickly said that they were busy and that steak takes 35 minutes to cook. It’s a shame people arrived, ordered, finished their meal and left before we got ours. Considering the sorry state our meal was in when it arrived I suspect they had forgotten about us and had then hurriedly gotten it prepared. The steak although was ordered as well-done ranged from charcoal-like to medium-rare just as it ranged from luke-warm to cold. I don’t think I’d ever recommend any one to eat there after that experience. It wasn’t the first time the waitress had forgotten us either as when we ordered drinks she came to us 15 minutes later and then realised she’d forgotten them. From the sounds of it though the place is popular with the locals and appears to be an Australian chain of “Irish” pubs.

At last our experience and exposure to Darwin’s humidity came to an end as we headed to the airport in preparation for a 05:10 flight the next day. Ideally we would have had the hotel room for that evening but unfortunately it was full due to coach loads of people having turned up that day.