My flight for today had been cancelled once, and I’d been rebooked on an earlier flight. Due to this, it meant I’d got almost three hours less to see the city of Hamburg. This would mean that my time at the Miniatur Wunderland would be at best ninety minutes to look around. At least, that’s what I thought. Just before leaving the UK it was announced that from October 4th it would no longer be necessary to have a PCR or antigen test before returning home if you are fully vaccinated. So, I’d cancelled my testing at Hamburg airport, and now had ninety minutes back. Ninety minutes I could use in Miniatur Wunderland, or for viewing other sights. This was lucky as my schedule was extremely tight. Tighter than I'd have liked.

Miniatur Wunderland is a place I'd seen on television a few times, in programs such as Great Continental Railway Journeys, and James May's Toy Stories. It is a a place where model making is celebrated with large displays with incredible details, and movement to create something that everyone can marvel at. Having done some Warhammer-based dioramas myself, I was interested to see it up close, to see what I could learn from it in person as well.

The majority of sights to see are ones I’d need to try and see between sunrise, and arriving at the Wunderland. I was tired though, once again I’d had noisy neighbours that were talking loudly and banging around. They were hitting the wall frequently with enough force for the mirror in the wall to shake. This went on for a few hours, and I certainly got a lot less sleep than I’d hoped for.

As it got closer to 06:00 I got ready for my run, and headed out. Due to how busy this morning would be, I kept this short at just two miles. I then packed for the final time, after finding my immersion heater had gone faulty so it would mean no cup of tea. Leaving luggage behind at this hotel requires a €10 deposit which you get back when you return. It makes me think they’ve had problems with people leaving it behind by accident in the past. 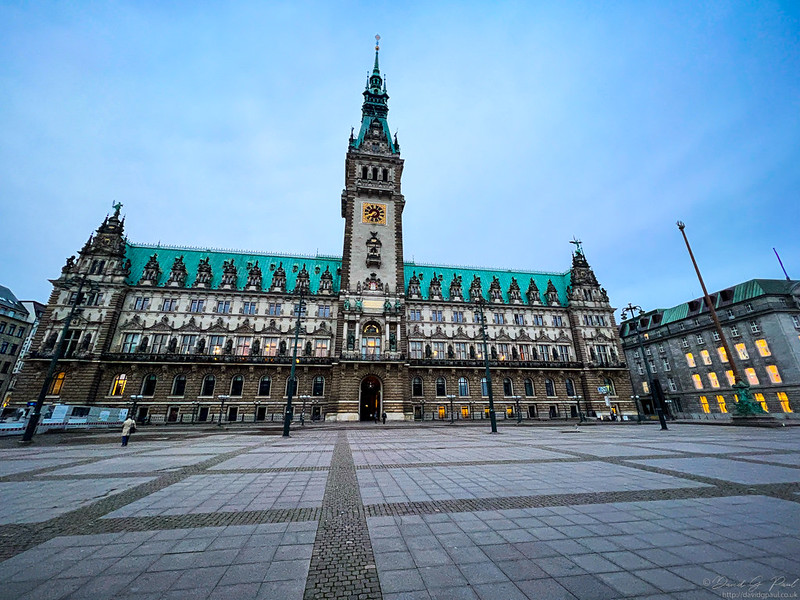 I started off just before sunrise by heading in the direction of the Hamburg Rathaus, the townhall. This was a large open square, and one of the farthest points in the list of sights to see. There was a lot of construction going on there too which meant getting a photograph of the building wasn’t so easy. It was also not quite light enough to get a reasonable shot, but with the forecast as it was, it wasn’t going to improve much if I waited. So, I moved on to St. Michael’s Church. This is one I’d considered going up the tower of later, and into the crypts, but when I saw it in person it looked too modern to be worthwhile. 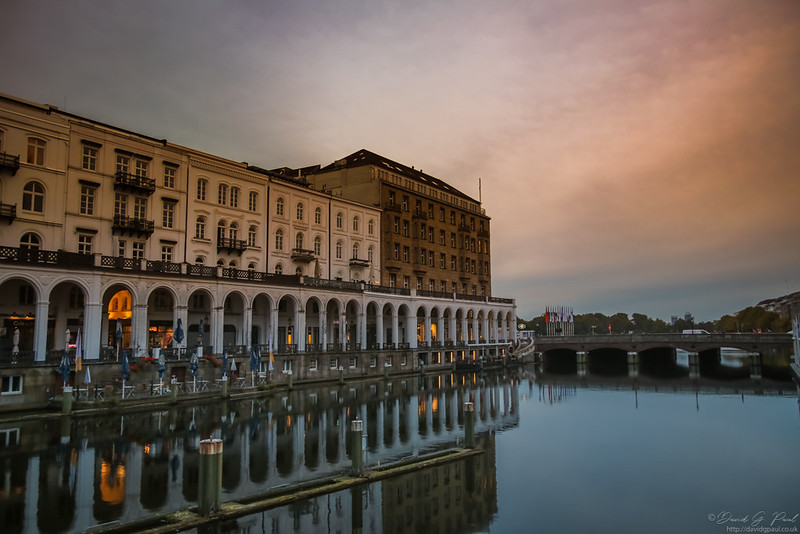 The only other sight on my checklist was the Elbphilharmonie, so I walked past that and had a look at the boats that were moored in this area. I noticed one called JR Tolkien, and another called Loth Lorien - it seemed likely to me that they were owned by the same person. 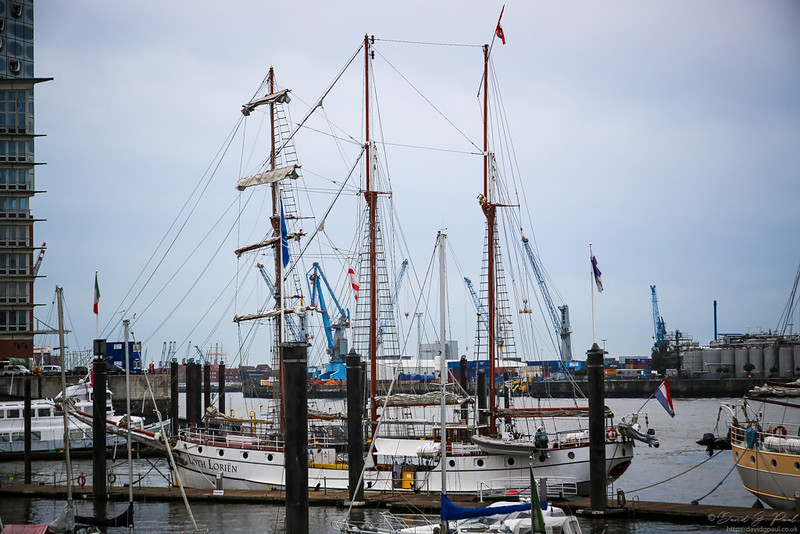 I considered walking to the International Maritime Museum, but thought it’d be an idea to see if I could enter the Miniatur Wunderland early. As it happened, I could go straight in! I showed them my ticket, then my COVID-19 vaccination proof, and then had to show ID. This meant I’d managed to get that little bit longer for looking round, or to use elsewhere if I wanted to.

Inside the Miniatur Wunderland, there are road markings on the floor to guide you around, and plastic screens in some places to help with COVID safety. As with everywhere in Germany, indoors you must wear a mask, and stay 1.5 metres or more away from other people. I also saw them cleaning the railings from time to time as well. 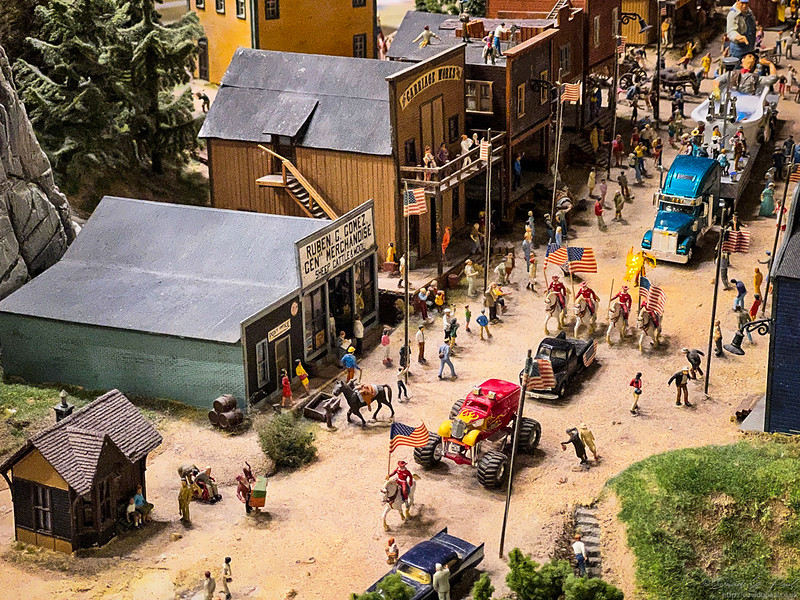 The first of the areas I saw was for America - it started with a very Western feel, and moved round to other parts of the country with more modern use of rail. Everywhere I looked there was some little detail to spot. There are buttons in places where you can press them to activate an action, such as revealing Area 51 underneath the Nevada desert. 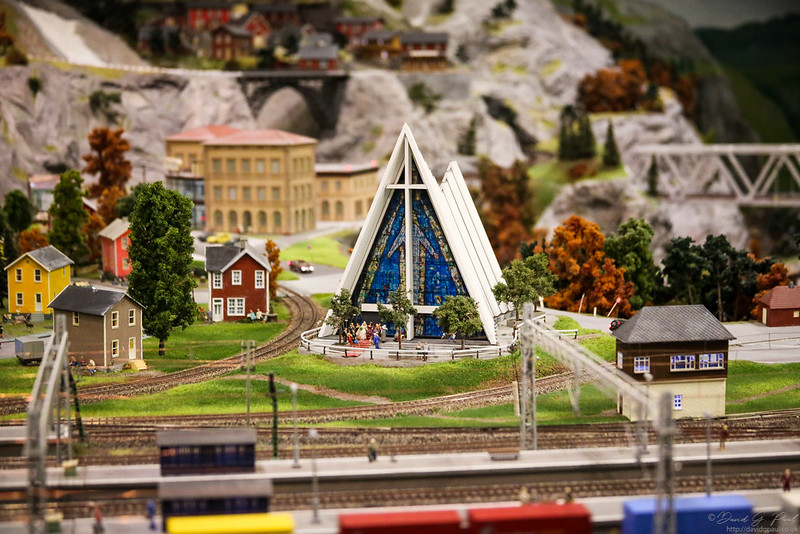 Next, is Scandinavia, and one of the first things I recognised was the Arctic Cathedral from Tromsø. It helps that it’s somewhere I’ve been in person! The following scene also was, as it was Hamburg, and this includes a miniature Miniatur Wunderland building! I also recognised the Elbphilharmonie which opens up so you can see inside. Middle Germany didn’t seem as recognisable, so I concentrated on what I thought were nice little details. 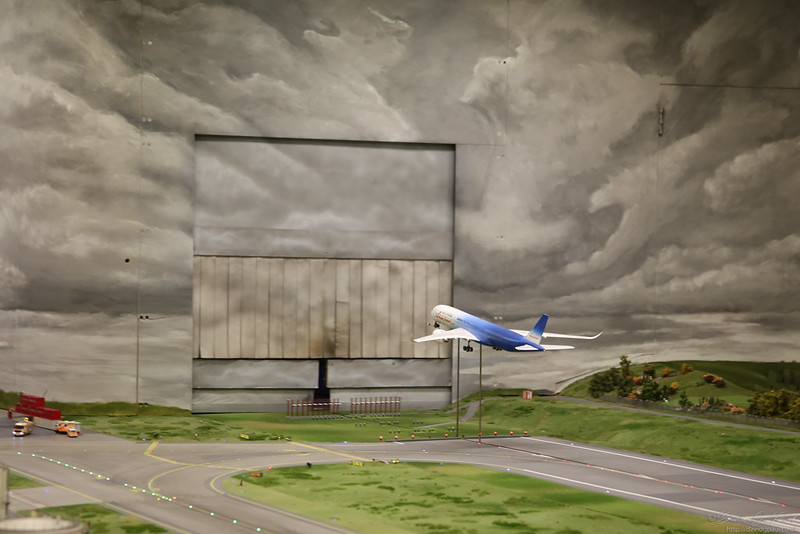 After these two German sections, there are two fictional areas for ‘Knuffingen’. The second of these is the famous airport model which has featured in a number of television programs. You can watch model aircraft land and take off on the runway, and move around the airport as you’d normally see. In the Bavarian section there was a castle which I was sure was Neuschwanstein Castle, a place I’d visited whilst I’d been staying in Munich. 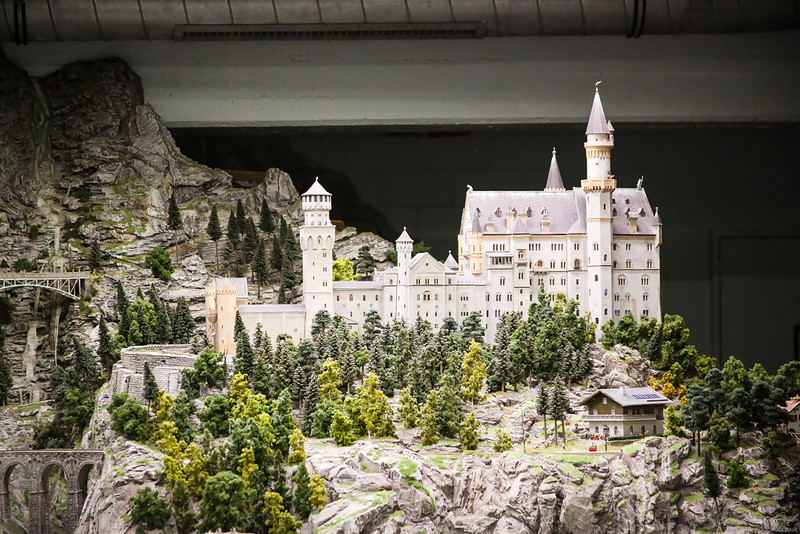 Switzerland covers two floors, and on the upper floor it has Austria right next to it. Alongside the lower part there is Italy, which is actually quite big as there’s sections for Pompeii, the Amalfi coast, and a very large section just for Rome, and Venice. The Venetian section is quite new, having been completed just before the pandemic, and it was intended Monaco and England would join these by now also. It’s possible to see Monaco underway, but there was no sign of England. 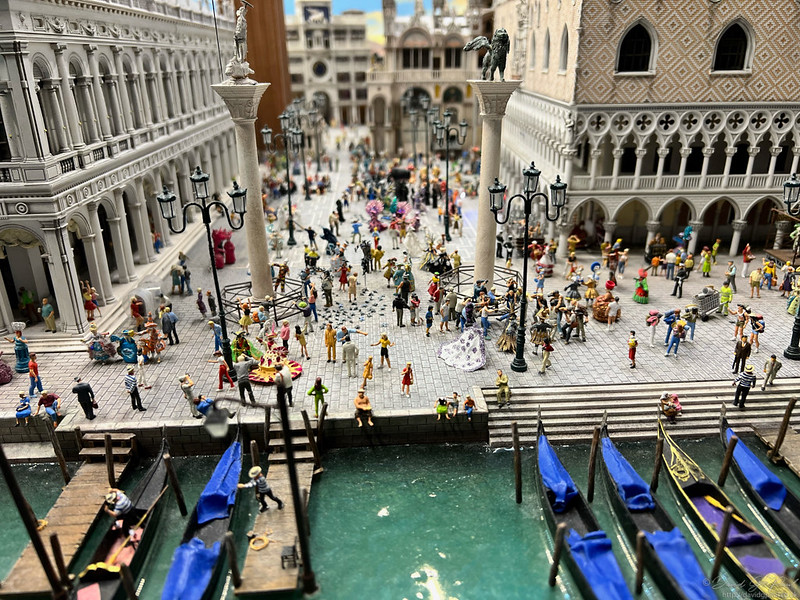 On the way out it’s possible to see the control room, and people working on new models. Of course there’s also a restaurant and gift shop so you can spend more time there if you want. I was done just after 10:00 though, so I decided I’d now got time to make my way over to the International Maritime Museum. Whilst the museum wasn’t that far away, I walked slowly to let my legs recover a bit from the exertions of the last week. I thought there may be some tall ships to see around there, but could see none. Feeling like it wasn’t worth sticking around, I made my way back to the hotel to collect my luggage, and get to the train station.

The train for Hamburg Airport seems to always be platform 3, and there’s another every 10 minutes or so. The signage on the platform also shows that it’s always the front three carriages of the train, as the ones behind it are left at the penultimate station.

It took me fifteen minutes to get through the check-in and bag drop, which isn’t too bad considering the new measures - but I didn’t need to show anything, not even the Passenger Locator Form. My assumption is that they can look these up by passport number to know it's been completed. After quickly eating some of my lunch, I went through security, and this was another fifteen minutes. I guess it should have been no surprise that my backpack was swept aside to be checked manually despite all electronic devices being in a separate tray. They picked up the apple I had in my bag, swabbed the area of the bag where it’d been, and then let me have my bag back, with the apple back inside.

The flight left the gate slightly ahead of schedule, and as a result landed in Heathrow fifteen minutes early. During this flight there was complimentary water and a packet of lightly salted crisps. They asked if people could put them in the sealable bags they’d been given, but hadn’t been, and they’d be collected, but weren’t. I'd seen them in the basket they were handing out hand sanitiser from when boarding though. For the deplaning, this was done four rows at a time, but somehow they jumped from row 12 to row 20, so it seems they lost count at some point. I think these new processes will still take some time to settle in, and will eventually feel smoother. It's still a very new way of thinking to most.

Upon arrival in the terminal there are constant notices that if you’ve arrived from a ‘Red List’ country you must go to Terminal 4. Everyone filters through into the same immigration room and from there you can eventually find your way to the automated gates - which is the one time you must remove your mask temporarily. It wasn't quite as slow as I'd expected post-Brexit. For baggage collection, this time I could get an idea of where my luggage was from checking up on the location of the Apple AirTag tucked away inside.

Although the UK is in the middle of a fuel crisis brought on by Brexit, I had a lift waiting for me for the final leg of the journey home. Another adventure was over.

This trip had been a very different one in some ways to trips that had come before. COVID-19 has changed the way we travel, at least for now. I’d travelled on so many trains, something I generally don’t like doing because of how easily I feel it can go wrong, and had covered 1,519 miles using them. Where I’ve had problems before, finding sights, has now due to improvements in technology, and an improved sense of direction, gone well. Even after all these years there's still new lessons to learn, and new experiences to be had. Whilst busy, I did enjoy this trip, and look forward to getting back to travelling more regularly, but I think we've all learnt to be a little more cautious - who knows that the future may bring.