The day after a marathon is never the easiest of days to be walking around. Yet this is what my plan was as it was my best opportunity to photograph the sights of Amsterdam. However there was also a thunderstorm forecast for the entire day. Fun.

I was up early even though the sun doesn’t rise until a little after 08:00 here. Since most of the sights I wanted to see didn’t open until 10:00 I figured I’d got time to relax at the hotel some more before getting damp outside. I was glad of my waterproofs by the time I got to the tram stop at Rijksmuseum. 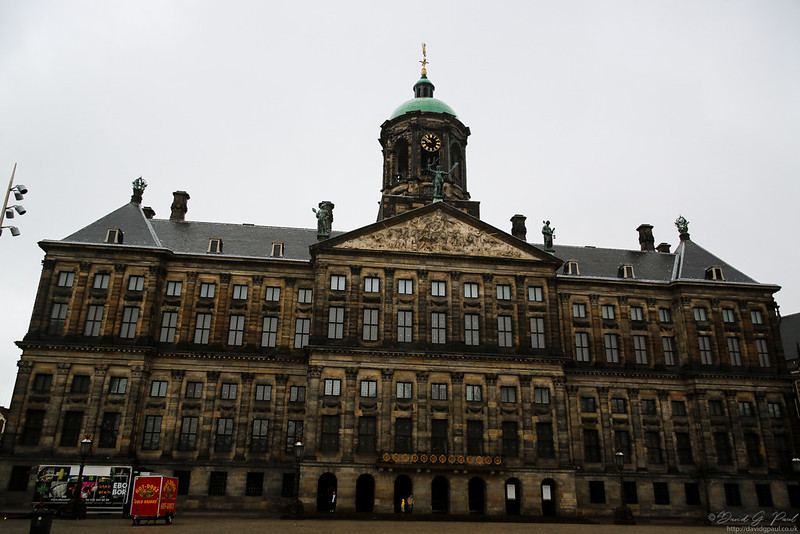 Shortly afterwards I’d arrived at Dam Square, and the rain persisted. I risked taking photographs of the almost empty square, and the National Monument before putting my camera away once more. I’d decided as it was almost time for the Royal Palace to open, I may as well take a look around at a cost of €10.

I loitered on the steps for about ten minutes, and was the second person through the doors. As with the Zaanse Museum, you have to stow your backpack in a locker before looking around. They also make you watch a short video with the audio guide before starting the tour properly.

Upstairs the first thing you see is the splendour of the Citizen’s Hall, with the throne room through the door at the end. It’s quite a sight, and the other rooms don’t really compare to it. There are quite a few bedrooms used by foreign visitors, and some used for meetings. 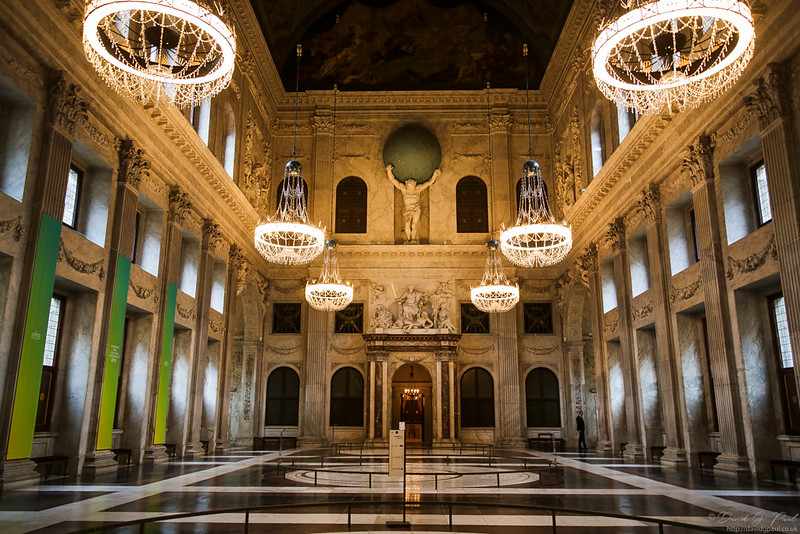 I hadn’t realised that this place also had a connection to Emperor Napoléon Bonaparte of France - it was the home of his nephew, King Napoléon Louis Bonaparte of Holland; otherwise known as Louis II.

Nextdoor to the Royal Palace is the Nieuwe Kerk: new church in name, but actually a 15th Century one. This is where the royal coronations take place; but after poking my head through the door I decided it wasn’t worth going around. I thought it interesting though that 'kerk' is like a hardened form of 'church'; both must have Germanic origins (which in turn comes from the Greek).

I knew it wasn’t far to Anne Frank’s house, so I headed there instead. The next time I’d be in this area I wouldn’t have my camera with me as I’d seen on their website cameras and backpacks are not allowed. They also have nowhere to store them: which is why I’d decided I’d go in the morning of my flight home. For now I’d just take a photograph of the outside.

Closeby to the house is Westerkerk, a church that has a monument to Anne Frank just outside. This monument is a small statue in her likeness, and at the time there were fresh flowers next to it. Whilst in the area I also tried one of the local cuisines: a waffle coated in white chocolate. It was if anything, a way to stay out of the rain for a bit.

Next on my list of places to visit was the Oude Kerk. When I got there I did a complete lap of the outside to try and find the best place to photograph from. On one of the sides there were many windows on the opposite building, and I thought it was one of those shops. As I walked passed I thought it was ironic, or maybe somehow appropriate that it would be right next to the oldest church in the city. However, when what I thought was a scantily clad mannequin in the window winked at me as I walked passed it startled me! I later found out that the church is in what is known as the Red Light District, and then I realised what those buildings surrounding the church actually were.

The Old Church only accepts card payments, and costs €12 to go in: more than it costs to go around the Royal Palace. It seemed a bit high in comparison; but it was a place I wanted to see - so paid it. 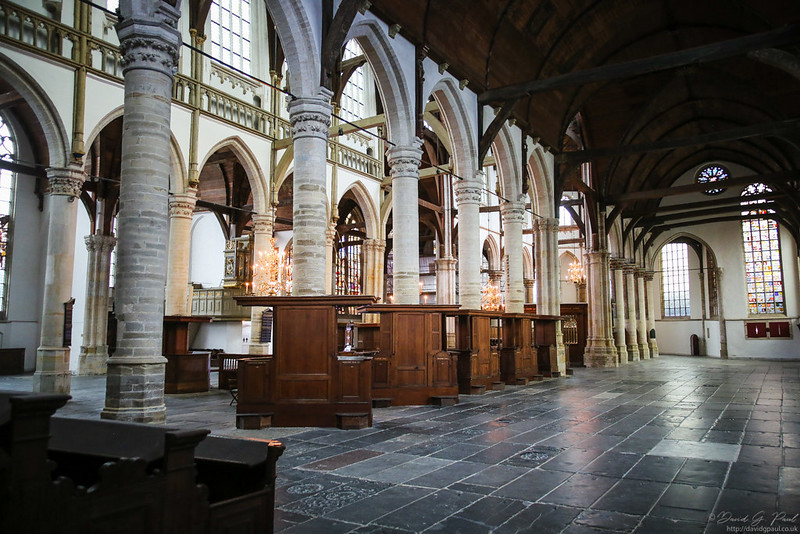 There’s a lot of restoration work going on inside and outside of the church. It’s why I’d taken the time to circle the church before going in as it’s difficult to find a good shot of the building without getting the scaffolding in the shot. A little reminiscent of visiting the Acropolis in Greece.

I took my time as I was so far ahead of schedule it meant I might just run out of things to see. Even in the Basilica of St. Nicholas which was next on my list, I sat down inside for a while, and made certain I’d seen it all.

The rain has eased off when I’d left the first church, by the time I’d left the Basilica it was starting to get heavy again. By the time I reached the Maritime Museum I was definitely feeling damp. 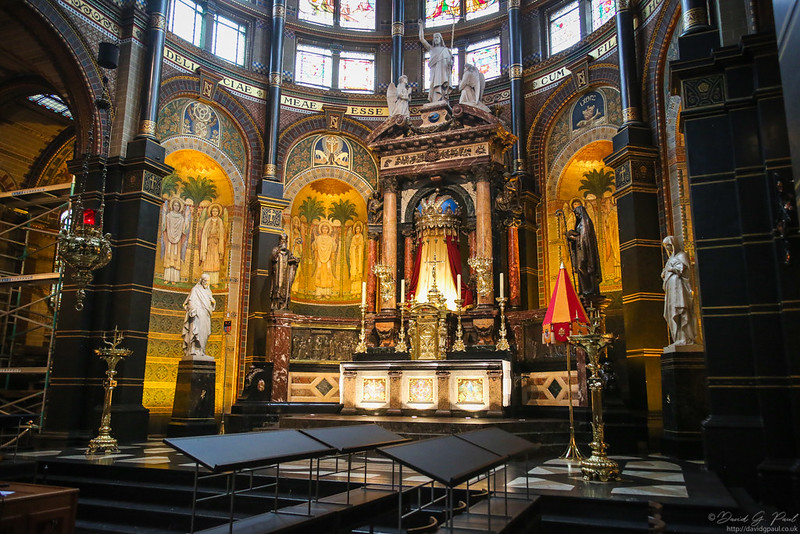 Outside of the museum I could see two large ships, so photographed them before going in. Again I had to stow my backpack in a locker; but this time it was barcode based and a little more difficult to operate. I found that when pressing the button to open it, if you pressed too hard it closed it again straight away.

It wasn’t obvious where to go inside the building, so I picked a direction and went to see what was there. I found some steps that led up, and either side where two different exhibitions. On one side were a lot of old maps and model ships. The next floor has quite a few figureheads from ships, though whilst in there I found the inside of my camera lens had started to mist up.

I sat for a while in the hope it would demist; but it only seemed to be getting worse. In the next room there are quite a few navigational instruments, and not wanting to sit around too long I started using my phone to take pictures with instead.

On the other side of this floor was an area dedicated to a very large whale, though I didn’t find that particularly interesting. On the next floor I found it was empty; but bumped into Keith who I know from both my Nepal and Malawi trips. I hadn’t even realised he was in town, and to then just bump into someone you’ve randomly encountered on two previous trips is just bizarre.

We stood around and caught up for a while; before going our separate ways to continue exploring the museum. I moved onto the opposite wing of the building; but didn’t find much of interest there.

Outside I could have a closer look at three of the four boats that the museum has around it. The first one I looked at was a steamboat which in some ways looked a little like a steam train. Below deck on this one I saw a roped off area with a person at a desk. Again, I thought this was a wax dummy showing what one of the workers on this boat would have looked like. However, this turned out to be a real person who was actually working! 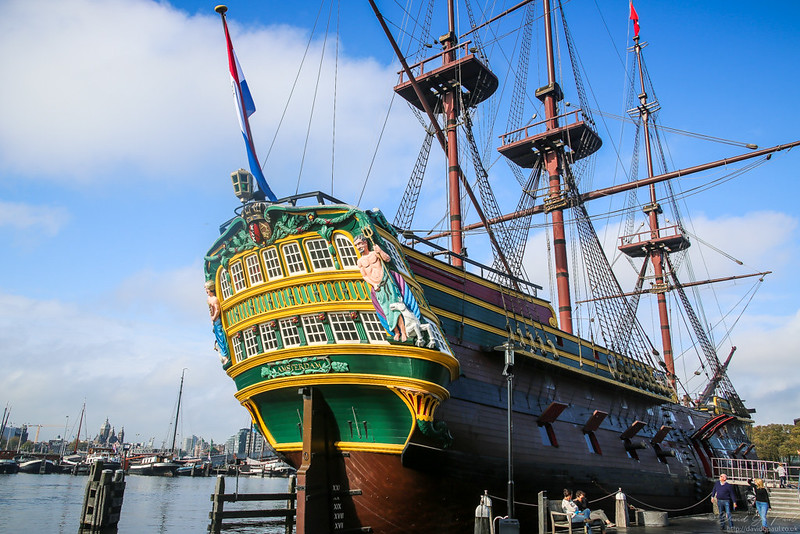 The next one was an older vessel which would have been used for carrying cargo such as rum. Below deck there were hammocks hanging from the ceiling, and canons at some of the portholes. Beneath this deck we could see the hold where they had cargo that resembled what it would have carried. This reminded me considerably of inside the Cutty Sark in London.

On the tween deck, and the other decks there were better sleeping quarters; though with very low ceilings. It meant having to crouch whilst walking around - not the easiest of things after a marathon I have to say.

The third ship I got to see was the Royal one - it’s housed inside it’s own building and is kept out of the water to prolong its life. Whilst there I noticed that my camera lens was now about clear so hund around until it had. Even the sky outside had cleared up a little so took the opportunity to photograph the “Amsterdam” - a replica of the Dutch East India Trading Company ship.

Before leaving the museum, even though it was now around 14:00, I sat down for lunch. Again I’d got a packed lunch with me as it gives me more options when sightseeing, and tends to also be a lot cheaper if not also healthier.

Not too far east from the museum is the De Gooyer windmill. I’d planned on photographing this from a distance; but found the best shots were from the bridge closest to it. As I’d not been able to save my legs from the effort I decided I might as well get closer, and from there I found that the sides are actually thatched. Sadly it doesn’t seem possible to look around inside.

This should have been the end of my day if I’d stuck to my plan; but I was so far ahead of schedule I’d got time to see more. I thought of a few options: the Resistance Museum, the Holocaust Museum, and the Botanical Gardens. Of the three the only one I’d considered previously was the gardens; but I didn’t actually know what they were like and there was another storm coming.

I walked passed all three without going in any of them, and found myself walking back to Dam Square. It was only 16:00 by this time: far too early for food, and over two hours until sunset. It felt like I’d got a lot of time to ‘waste’. I used some of this to sit in a donut shop, and drink tea whilst booking a trip to Jordan for 2020 - this would be one of those busy weeks of charity work that would end with a marathon. Though in this instance it would be across the desert and would start with seeing Petra.

In the time it took to book, I figured that I may as well get some food to take away, and make my way back to the hotel. I may not have got the pizza I wanted on the marathon day; but I was finally able to. I even ate a couple of slices on my way to the tram stop.

I didn’t stay on this tram that long though as when I passed the flower markets I thought it’d be an idea to look around. There’s a lot of the stalls lining the canal there, and most as you can probably guess, sell tulips. 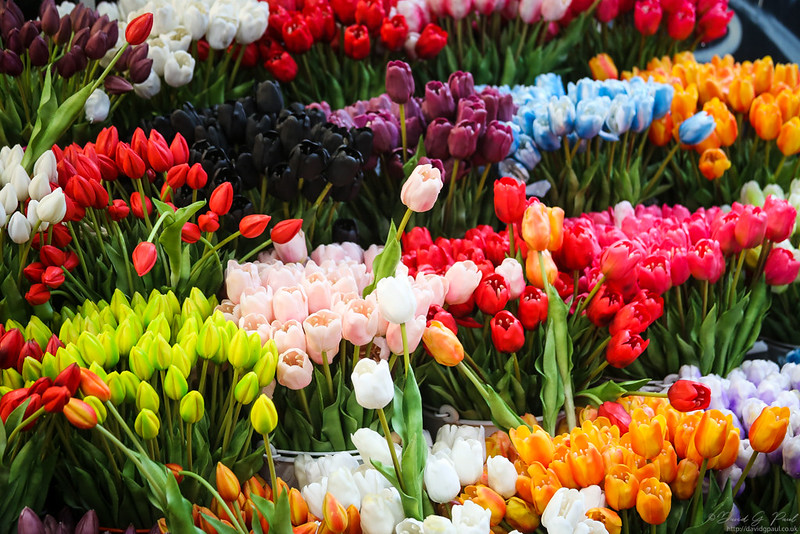 To get back to the hotel I walked as far as the Rijksmuseum, and after photographing another of the gardens, I took the tram back to the hotel for the remainder of the day. I’d pretty much walked a half marathon during the day, so felt I’d earned the rest.