Sleep had not been quick in coming. Between the heat and the sound of snoring, I got five hours sleep. Maybe not much, but hopefully enough for the day. I was up at 05:30 ready for the group run at 06:00 - early, but it’s a way to beat the worst of the heat.

Whilst getting ready I found the lock of the washroom got stuck - it just wouldn’t turn. I stayed calm and tried it slowly, but nothing. I tried putting as much force onto it as I could but still it wouldn’t budge. I knocked on the door several times but nobody could hear me. It looked like I was going to miss the run.

I went over to the window and looked out and saw some people sitting outside so told them the lock was stuck. When I returned to the door, as if by magic, the lock turned and I was out and ready to run. 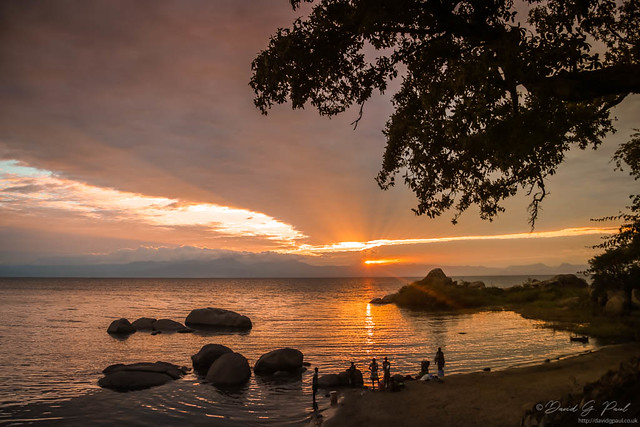 Running in the heat, even that early, was hard work. The ground was mostly as loose as I expected, though apparently the part of the course we ran is one of the harder bits we’d be running on the day. We also passed the resource centre that we’d be returning to later to begin our volunteering.

After a breakfast of peanut butter and chocolate on toast, I had what would turn out to be the most pointless shower - or trickle of water. When we headed back out it was incredibly dirty work. We carried bales of straw in pairs from the project centre out to where we were building a preschool. They weren’t easy to carry as they gradually fell apart. 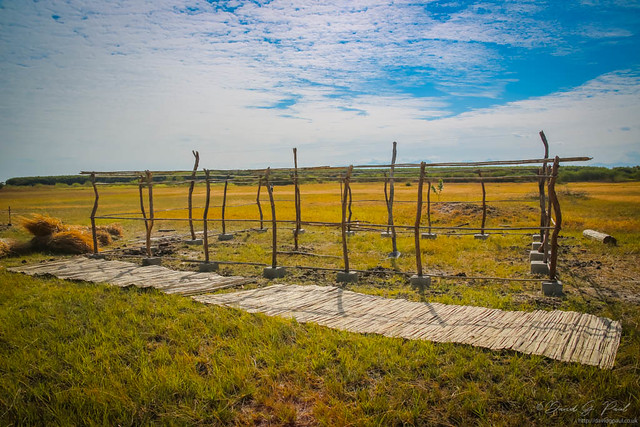 At the school there were three frames that would become buildings: a toilet block, a kitchen, and an area for shade. We used machetes to cut branches to size, and a smaller knife to dig holes with. It was finger blistering work, even with the gloves I’d got.

After the floor of the kitchen had been wet, we needed to use a big heavy tool with a concrete base to flatten the floor. When I started helping with this I started throwing it at the floor for a bigger impact - thinking it’d get the job done quicker. I hadn’t realised though that despite its weight, the ground would be springy enough to allow it to bounce back up; and bounce back up it did - hitting my in the jaw. It startled me as it felt like I’d just been punched - it’d even drawn blood. I guess we really were putting blood and sweat into the project. 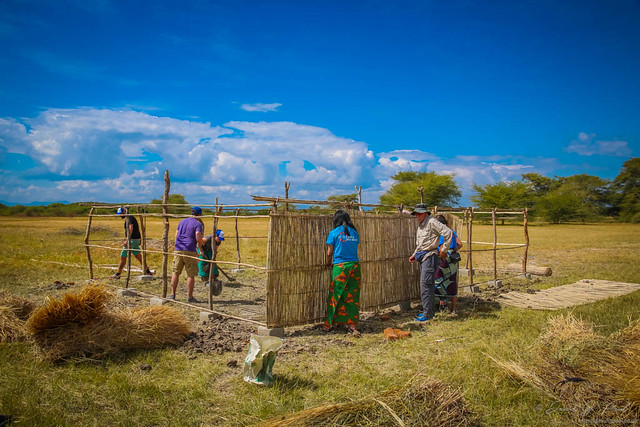 Whilst that floor was continuing to be worked on, a few others were almost finished with constructing the toilet block. I moved on to clearing the floor of the largest of the buildings, though was finding it increasingly hard as the blistered skin started to tear. By the time I stopped hoeing the ground, to have a couple of biscuits and an apple, others had begun putting up the walls.

We headed back to the Malambe cottage at 11:30, and stayed there for lunch until 13:00 when we returned to work. This time our group was installing bins in the community. The first place was a secondary school, but the builder hadn’t yet arrived. Whilst we waited we picked litter, and was shown around a new girls dorm they’re building for students that live further away. Ideally they wanted to build a boys dorm as well, but didn’t yet have the money.

The bins for this location were already there - two large oil drums that were attached to posts, and would be allowed to pivot. They just needed cementing into the ground and spraying. The reason they are allowed to swing is that once full they will empty the bins and burn the contents. It might not be a great idea to burn plastics, but it’s the best solution they currently have - they can’t wait until have the capacity to recycle as littering is an issue now. 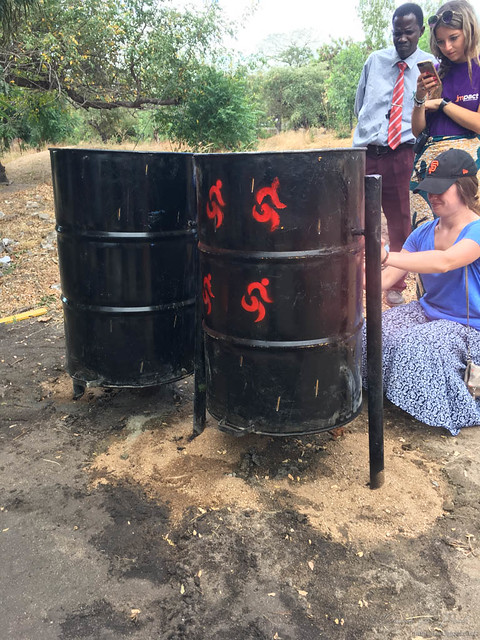 Once in place, they were painted with the IMS logo, and then we packed up and pushed the wheelbarrows of equipment miles across deep sand to the second location, Sungo. This village is a small fishing community of the shores of Lake Malawi. Along the way we also had to pick-up and carry the oil drums we’d need. 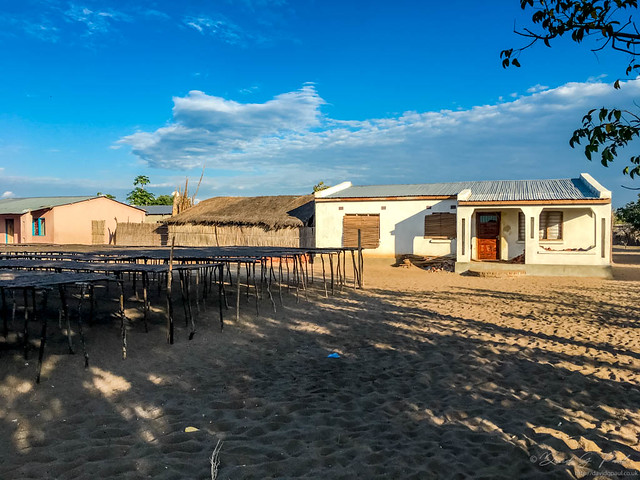 For this one we had an audience as we were surrounded by Malawians that were interested in what we were up to. I’d been concerned that by burning the rubbish this close to the lake they’d be polluting the lake, but apparently it wouldn’t be a problem. Or at least it wouldn’t affect their water supply as the villagers got their drinking water from a bore hole instead. 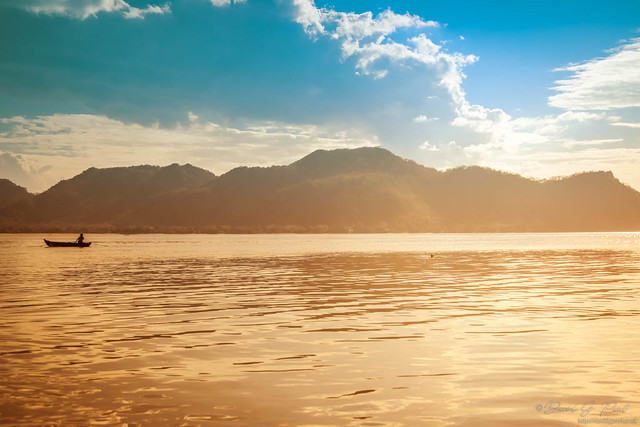 It was surprising just how warm it got in the afternoon - I was ready for some shade. Perhaps the dust of the sandy beach kicked up into the air will have helped to block some of the sun, but I think all it really did was help to make some interesting photographs. Once I'd snapped a couple of photos I then helped to carry the equipment from Sungo to the primary school the other group was finishing off. It was a shame, but we’d not quite finished it off - the roof and the floor of the main building needed finishing. 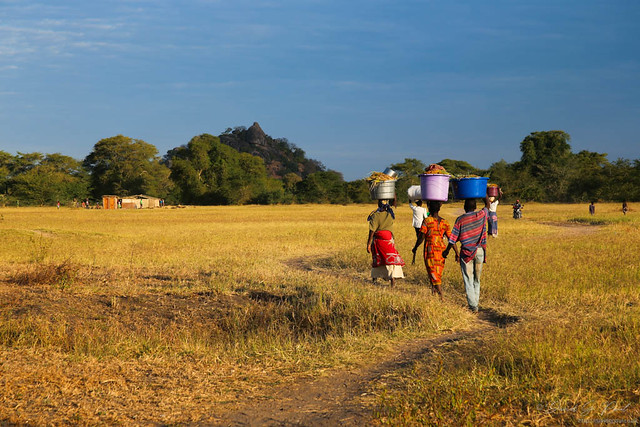 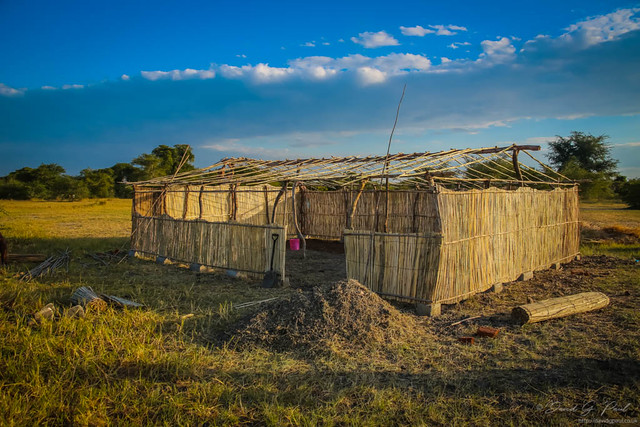 It was thirty minutes until sunset, and we were given the chance to climb Nkope Hill to watch it. In places it was a bit of a scramble, and in others I hung back to help pull people up rocks; but the effort was worth it. We could see Nkope and the villages in the entirety, as well as a spectacular view of Lake Malawi. 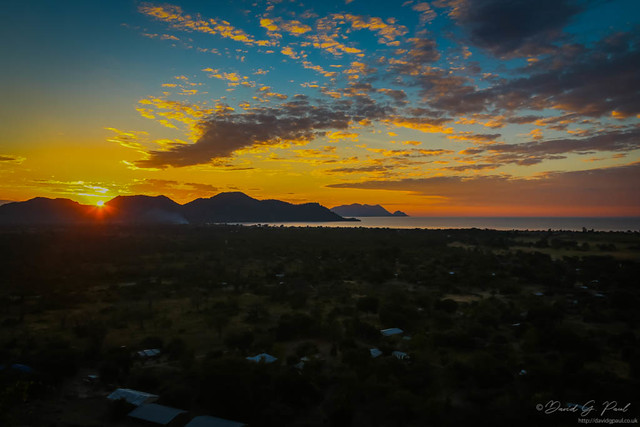 That evening we had chicken burgers and chips back at the camp. Everyone was tired from a day of hard work, but we sat and talked to recount our experiences before an early night. In that time I had more mosquito bites than I’d had during all the time working outside, despite wearing clothes that are supposed to deter insects.

It was nice getting to know new people, something I’m not normally very good at; but by 20:45 I had no choice but to sleep. I really needed the rest after having run five kilometres, and having walked a further eight miles.