The long journey home began today after a 07:00 breakfast with a bus ride from Chitwan to Kathmandu. The bus left Chitwan at 08:30 and took almost an hour to get across the city. We then continued along the same road we’d arrived from Pokhara on a couple of days previous for a further 2 hours. This time though we were heading past the junction and on to Kathmandu.

Our first stop was a 10 minute one fair early on, if you exclude the stops we made to pick up extra passengers. At 12:00 we made a stop and it seemed this would be the only chance for a lunch stop so I bought a tube of pringles for 300 rupees as it seemed the best option, just not a very healthy one. 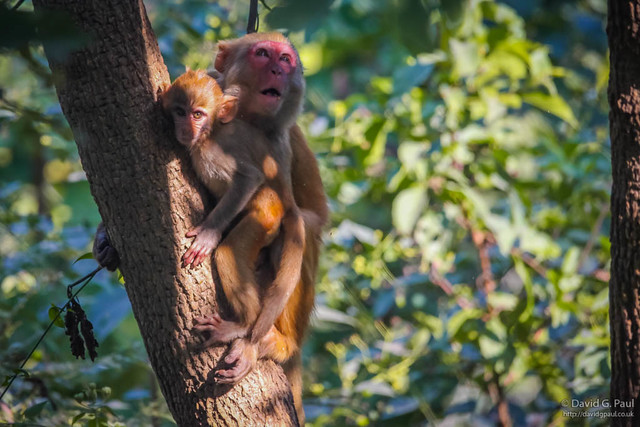 Unexpectedly we stopped 30 minutes later for a 30 minute break and on this one I photographed some monkeys in the tree there. The hotel owner next to these trees didn’t seem to like monkeys and threw a brick at them.

Later in the afternoon we made one final stop just 21km away from the city. This was another short break and at the time I thought it pointless, but when we reached the city limits we soon hit traffic and it took over an hour to get through.

Whilst in the queue I noticed one Nepali cleaning windows whilst standing on an upturned bucket, on a ledge over a four story drop. It wouldn’t have taken much for him to have fallen!

We finally got through the traffic and reached the final stop a 16:45, but this wasn’t the place we’d taken the bus from near Thamel originally and there was nobody from Trek Nepal to meet us either. We asked a taxi driver to take us there, but he had no idea where Mandala Street was so we had to walk 2.1km carrying bags and heavy suitcases. It was fortunate I had an offline map with me on my phone otherwise we’d have had no idea what to do.

At the Trek Nepal office they briefed us on what would be happening on the next day before telling us to go and check in to the hotel we’d been in at the start of this 7 day adventure.

Once checked in we looked around the shops for a while before meeting up with a couple of other marathoners for one last Nepali meal at the Electric Pagoda. I had a Himalayan Steak and apple pie – this together with a drink and tip cost me 1050 rupees, so was pretty cheap!

I packed one last time, and got some sleep ready for one last early start.