Breakfast today was served at 07:00 so I decided I’d get up at 06:45. For breakfast I had a couple of slices of “almost” toast and then had a cereal bar when I went back to the room.

The tours for the day started at 08:00 when we were driven to a place to board a dugout canoe. We took this along the river passing many mugger crocodiles as we went. Due to it being early morning there was also a kind of haze hovering above some of the water. The canoe itself seems to get very close to the riverbed in places, but I was pretty sure it was the light being refracted to make it look shallower. It’s also steered at the back by a guy with a big stick, something that kept dripping on me as he changed sides. 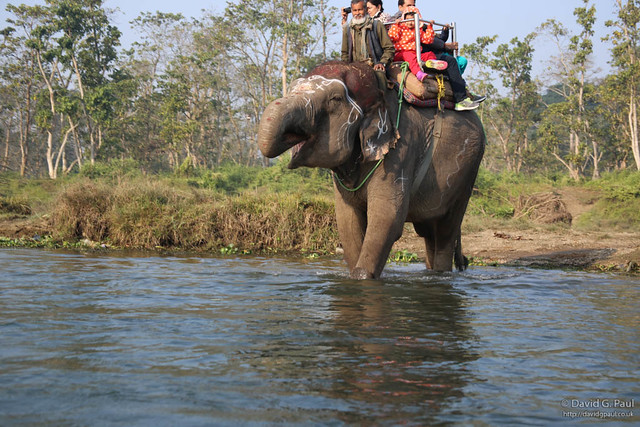 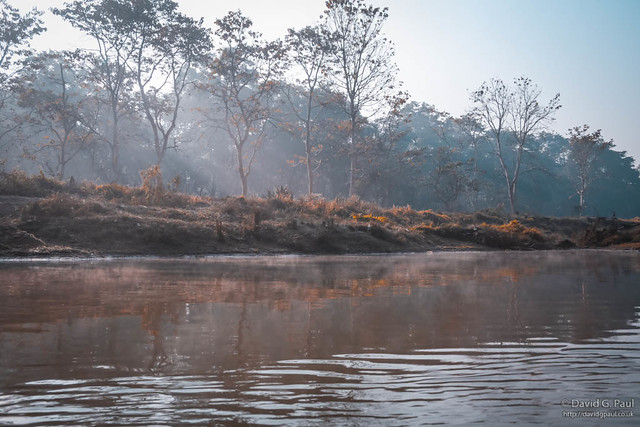 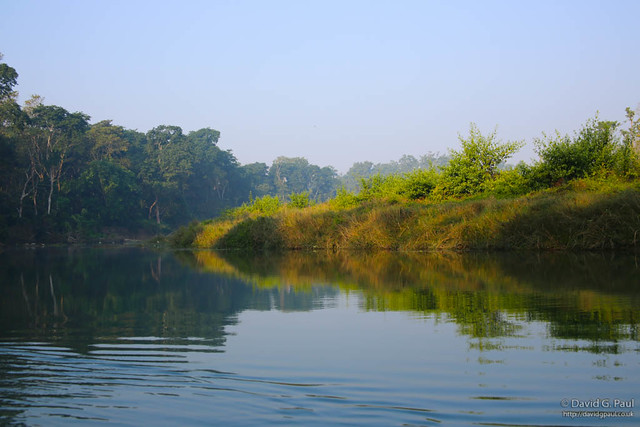 Eventually we got off the canoe and started a nature walk. This lasted for about an hour and we saw many termite mounds, a spotted deer, and a wild boar. Whilst hiking through the forest I did hear the sound of other wild boar once but didn’t get to see those. We also saw what the locals call “tree killer vine”, named such due to the way it takes the moisture away from the tree and kills it.

Once we’d finished this we walked to an elephant breeding centre where we first had to read the signs in an information centre. This told us things such as how at a very young age the elephants are taken away from their mother and have their food and water restricted. This form of torture effectively breaks them so they can then teach them to be beasts of burden. The torture of these animals doesn’t stop there though, it then described how they’re burnt and washed to desensitise the skin and how they can sustain injuries during training. 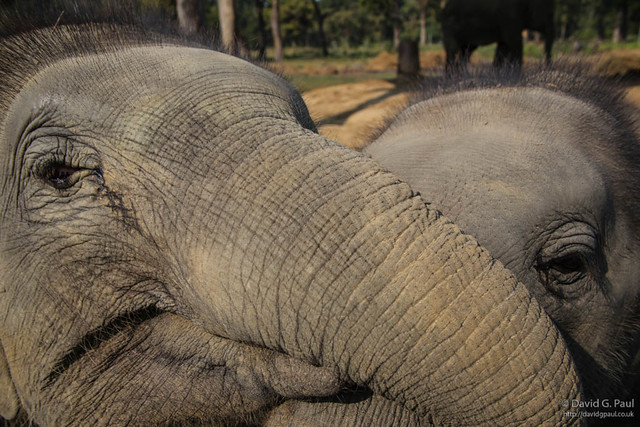 After reading this we were then shown the elephants in captivity with the older ones chained up by the foot, no longer able to roam like their instincts tell them to. I saw one calf also chained up, trying to get to one of the other elephants but it couldn’t and looked distressed. Female elephants such as these are herd animals, they’re not used to a solitary life.

I got closer to the young elephants and whilst watching them one of them used its trunk to pull on my leg to bring me closer and tried to pull me into the enclosure. It then started to pull on my shoe laces as well – you could tell that despite this harsh treatment, some were still quite playful, and I know that they’re protecting these elephants, but it doesn’t make it right. 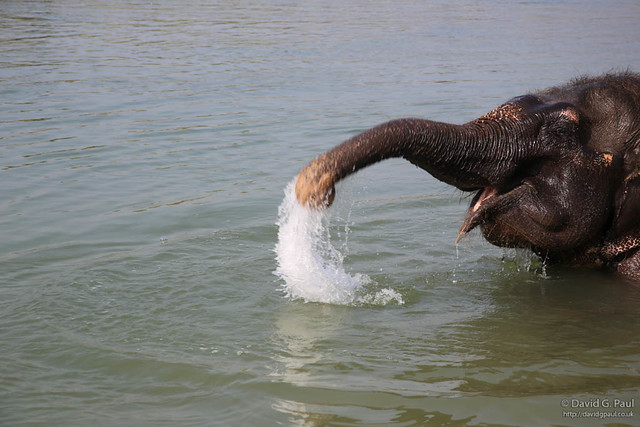 We were then taken to the elephant bathing area and this was just as bad. You could see the spiked tool they used to control the elephants and the pink scar tissue across the top of the neck where it gets used. Those that were in the water weren’t getting it any easier though – pulled around by the tusk or trunk. For those wanting to pay to be washed by an elephant the handlers would then scrunch the elephant’s ear and pull them to the side to make the elephant roll to the side when their time was up. 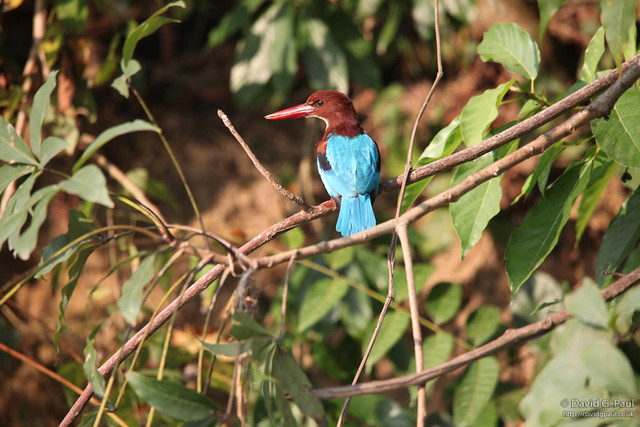 I decided I couldn’t watch them do this and instead spent most of my time there photographing the birds and dragonflies that were about. After about 15 minutes of this we were taken back to the jeep and driven back to the hotel ready for lunch at 12:00. I was glad I’d chosen the jeep safari option instead of the elephant back safari.

Today’s lunch was rice, chicken, vegetables, and fries – so pretty much the same as yesterday’s but with a tomato soup starter instead. We only had 30 minutes for lunch before we had to be ready outside for the start of the jeep safari.

The jeep safari started in the hotels one and this took us to where we’d seen the dugout canoes the night before. After hanging around in the midday sun for about 10 minutes we then put on life jackets and boarded the boat bound for the other side. Once over there it was a short walk to where some jeeps were parked up. I also noticed the occasional elephant footprint – apparently these would be from wild ones. 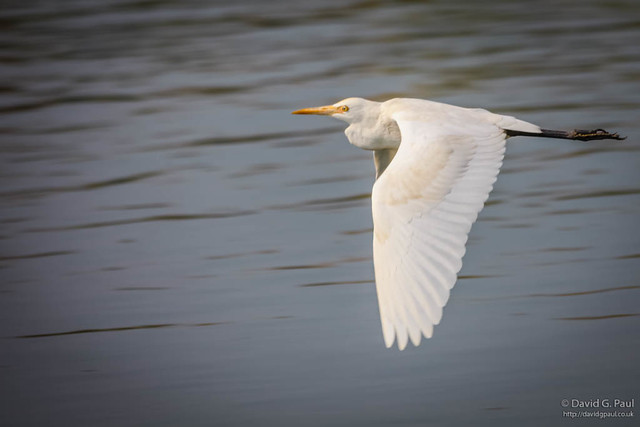 The jeep ride went a long time without us seeing anything, even at the watering hole it seemed like we weren’t going to see anything either. Then we saw a rhino on the other side, some deer, and a couple of crocodiles. This was almost everything we saw until just before we got to the conservation centre when we got a lot closer to a rhino, but it was still very well hidden by the bushes. It was a shame we weren’t able to get out and move around – but obviously this was for safety. 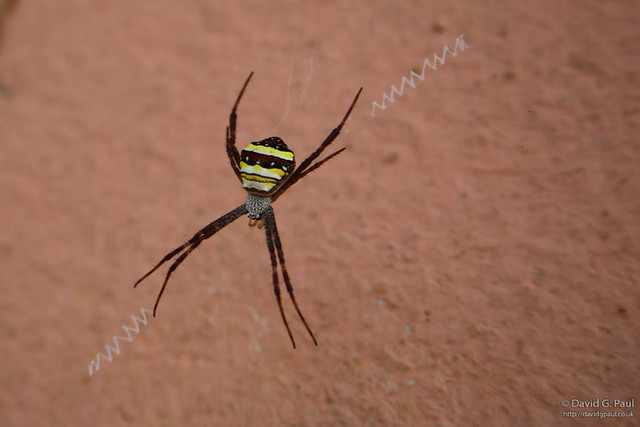 At the conservation centre I didn’t go in, though from the description it sounded like they were doing good work to conserve crocodiles and turtles. Instead I photographed a signature spider located just outside the centre. We were then the first group to leave and from there until we left the park at 17:00 we didn’t really see anything except for a monitor lizard up a tree. It was getting cooler too due to the setting sun. 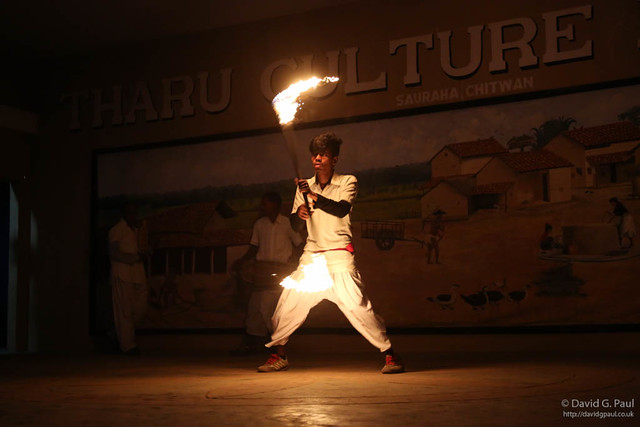 For tonight’s meal it was finally something slightly different, dal baht, though what it compromises of is mostly the same as the previous lunches and dinners. From there we then went to the Tharu Culture Program which lasted an hour and consisted of various dance performances based on local traditions. I thought some of them looked like a type of fighting kata that may have been used originally to teach warriors.

When the show was over we were driven back to the hotel one last time, but this time I knew that the music we’d hear late into the night and start again early morning was likely from these culture shows.