This was the last day with this specific guide, but we needed to meet him at 07:00 to take us to the bus stop for 07:30 when we’d board a tourist bus bound for Chitwan. Once at the bus stop we were then on our own for the journey and would be meeting a new guide at the other end.

The bus left at 08:30 and made its first stop at 09:30 for 20 minutes. We were told that although the planned journey time is 5 hours it could be 8 or more due to roadworks on the route and the bad road surfaces requiring us to go slower. Based on this I decided to buy something from the shop at this first stop, but the best thing they had was a small twix for 180 rupees – the equivalent to about £1.33 at the time!

A while later we crossed a big bridge over the river and from then until we reached Chitwan it was a very bumpy, narrow, and dusty road. It looked like the road works may have been there to widen the roads along the cliff and to improve the road surface. Although we got into Chitwan at 13:00 it wasn’t until 14:00 we reached our stop at Sauraha, on the edge of the Chitwan National Park.

From this stop we were driven in a jeep to the Jungle World Resort where we were each given a glass of Coca Cola on arrival and then shown to our rooms. We then got lunch at around 15:00 which consisted of soup, and was then followed by a main course of chicken, spaghetti in tomato sauce, vegetables, and rice. 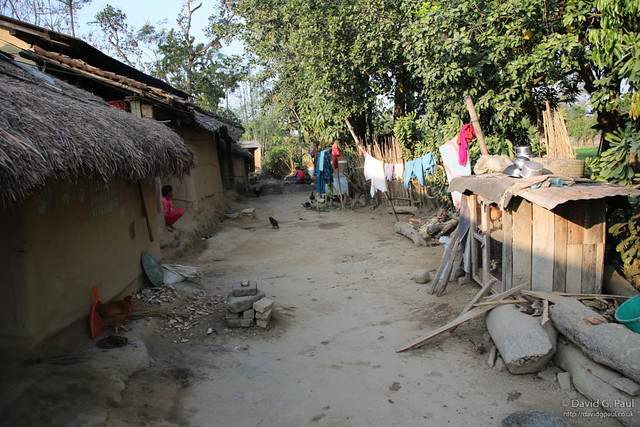 Not long after we then met up with the rest of a group who would be going on a walking village tour. This sounded incredibly boring as on the way in we could see that most of the town was modern and had no historical buildings. This started very close to the resort with a look at the traditional buildings of those area made from elephant grass and coated with clay in the winter months. We were also told how the locals could keep away malaria carrying mosquitoes through eating copious amounts of chilli. 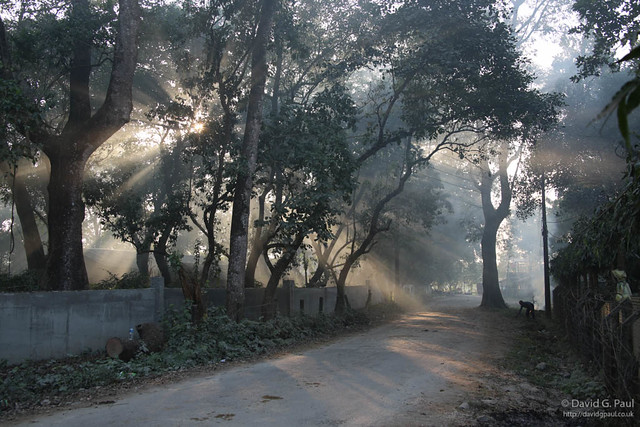 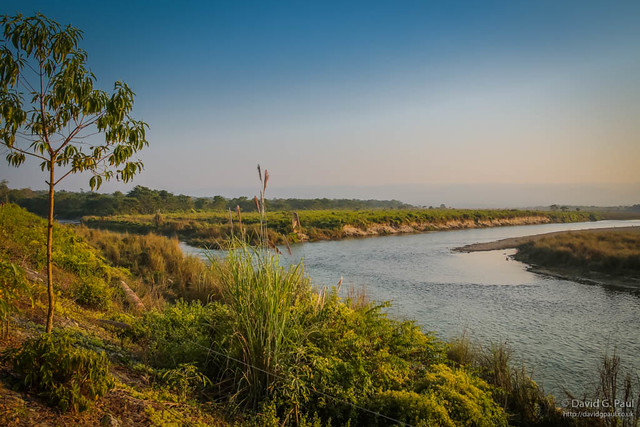 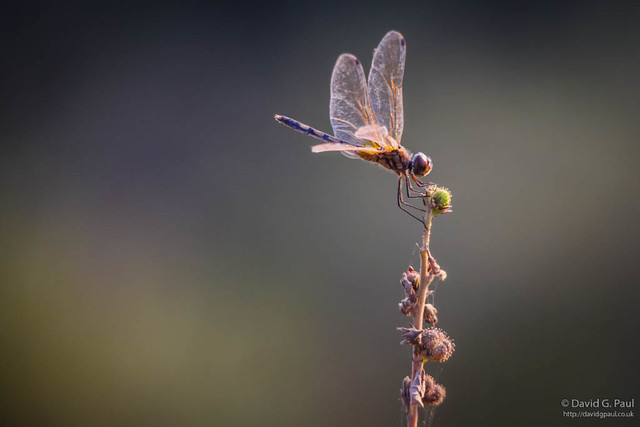 We then trekked straight through town and came out at a river. This is where it got more interesting and I realised this wasn’t your average village walk. From here we could see two species of crocodile – Gharial and Mugger. We soon saw a kingfisher as well though it was too far away to see clearly. As we walked along the path I stopped a few times to photograph dragonflies and eventually in the “No permission without entry” area I photographed an Indian elephant you could see in captivity. 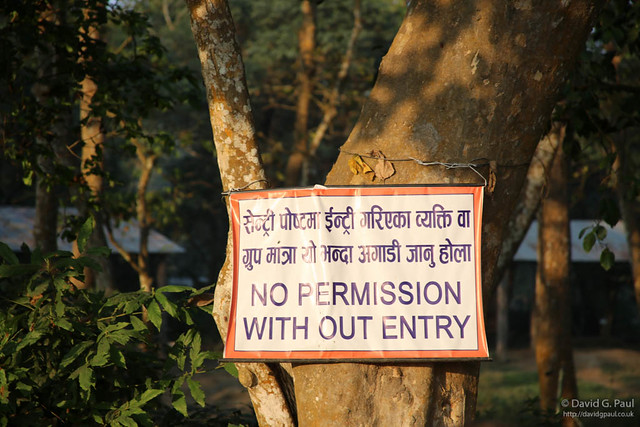 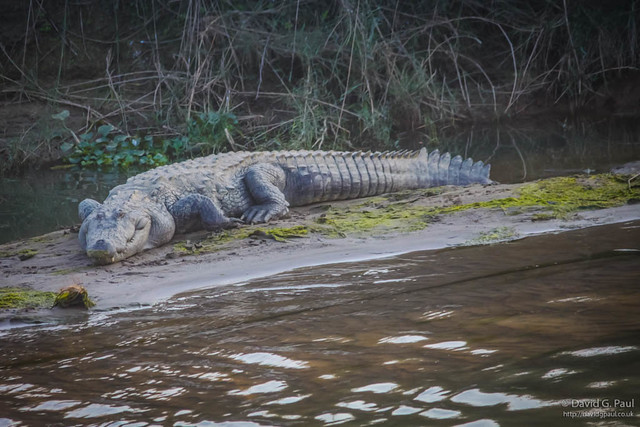 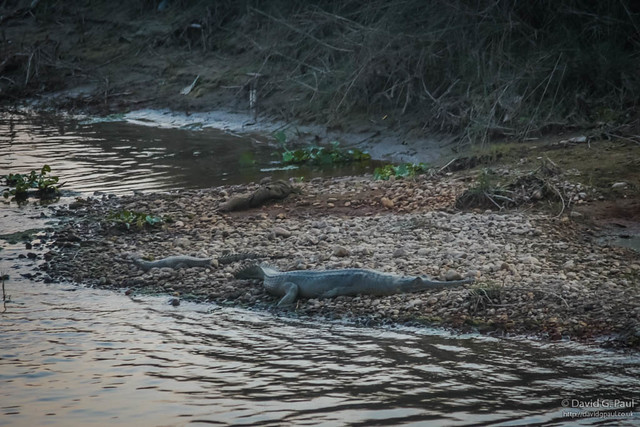 At the end of this path was a big clearing and there amongst the bushes we could see an Indian Rhinoceros. It was mostly obscured by the bushes so it wasn’t that clear, but it was far closer than any I’d seen in Africa. We couldn’t get any closer to it, or move around to where there was a clearer view so I had to try my best with the position we were in. 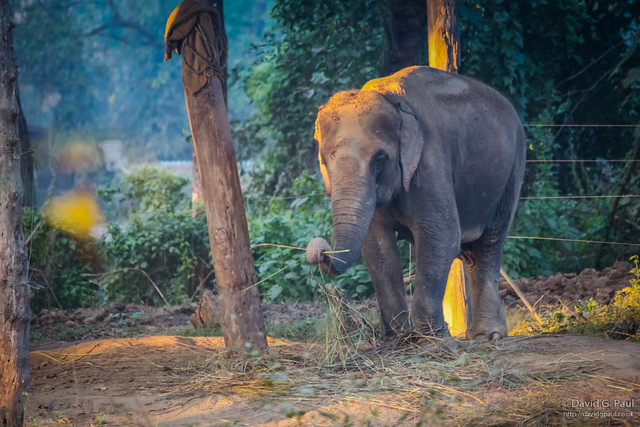 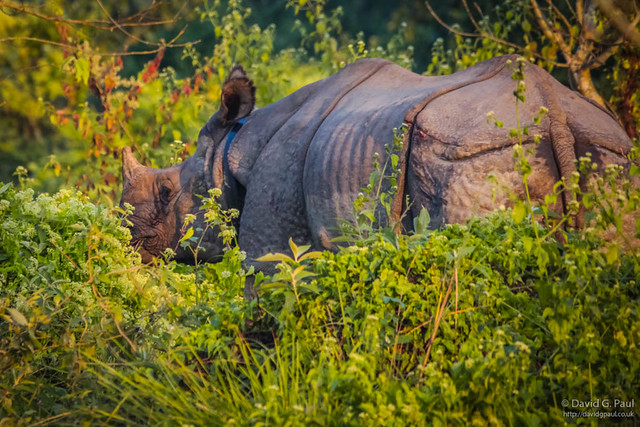 The rhinoceros eventually heard one of the people amongst the group and appeared to became agitated so our guide led us away along the path, back to where we’d first reached the river. Here we were told to wait until sunset, so we did, and I took some photographs of it whilst doing so. 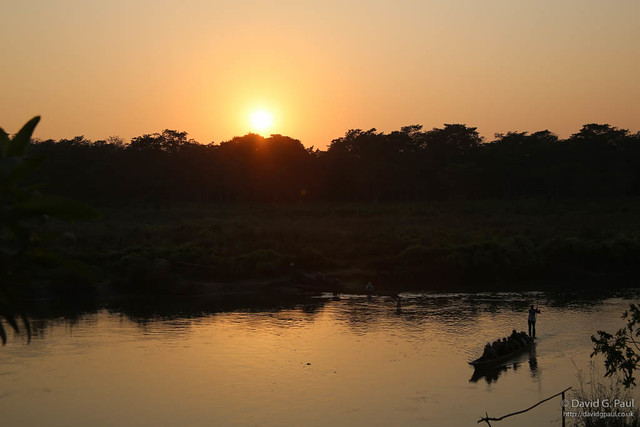 After sunset we were then taken by jeep to where another rhinoceros had been seen, sitting down in the river. We couldn’t get as close to this one, but it was at least another chance to photograph one. After about 10 minutes there we moved on and back to the hotel. 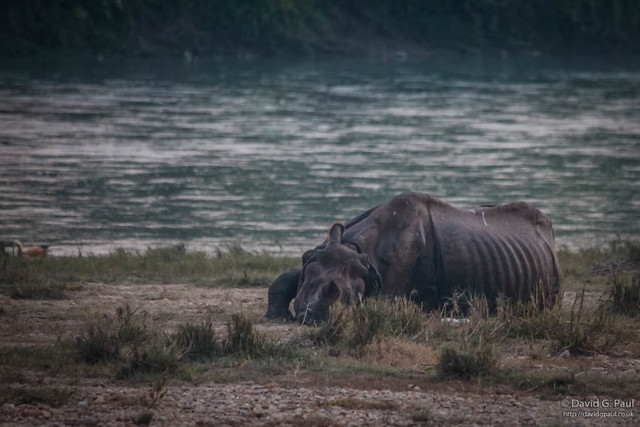 Dinner was at 19:00 so I had a quick shower first and then met up with the others at the restaurant. This meal was similar to earlier and was rice, chicken, pasta, and vegetable. The dessert however was some sort of apple yogurt though I don’t know what reality it existed as yogurt in. We then sat and talked for awhile until it was time to get some rest before another busy day.