Although the beds of the guest house were hard, I managed to get a decent 5 hours of sleep before I needed to be up ready for the hike to the Australian base camp of Annapurna. This meant it was pretty much the best night’s sleep I’d so far in Nepal. It wasn’t something I’d expected! 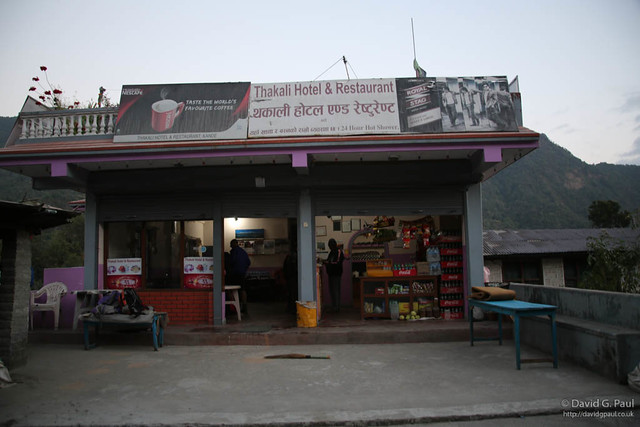 We set off at 06:30 before breakfast carrying only what we needed as porters would take our luggage from Kande to Pokhara ahead of us. I didn’t really want to leave any of my camera backpack with them so had to carry all 15kg of that on the trek. Fortunately it’s something I’m used to anyway. 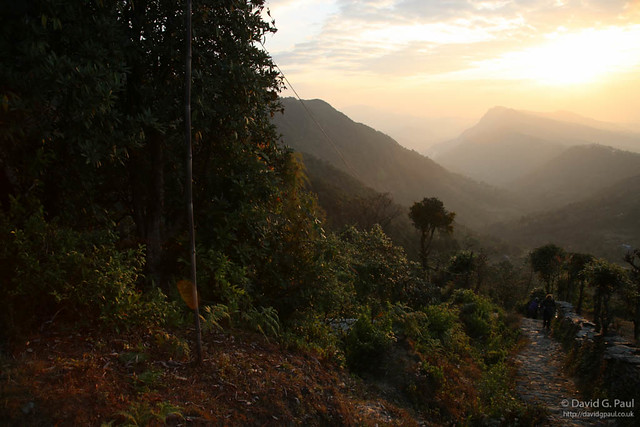 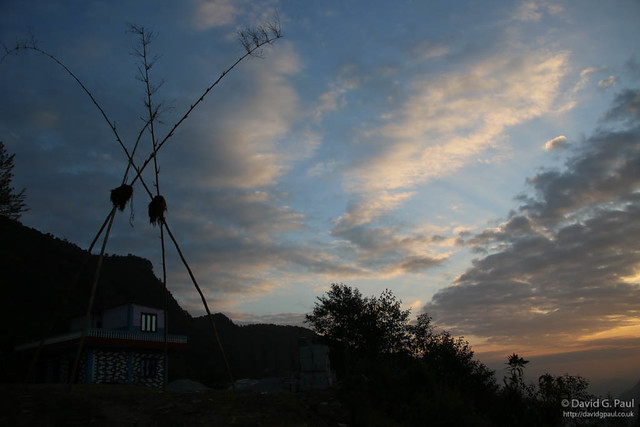 The morning trek started as the sun was rising and the two mile ascent took around 1hr30 to complete. Once we arrived at the Australian Base Camp there was incredible cloud cover which made the peaks of the mountains beyond, including Annapurna II, difficult to see. It created an amusing effect though where it looked like some of the peaks were just appearing out of clouds from nowhere. 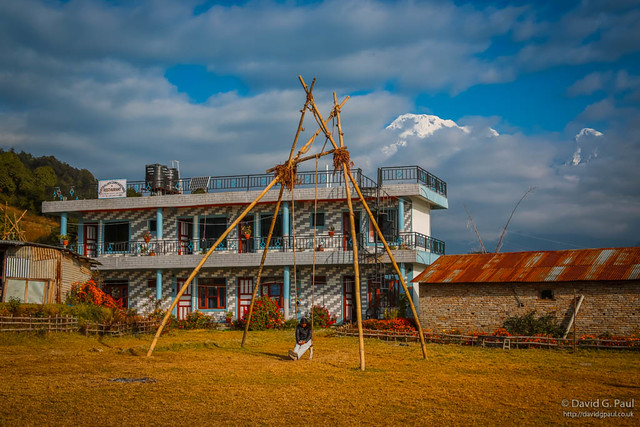 To start with we sat on the roof of the Australian Base Camp restaurant and ordered breakfast. It was nice sitting there whilst the sun was out with the mountains in the background. There was Wi-Fi as well, though this only lasted a few minutes until the connection died. 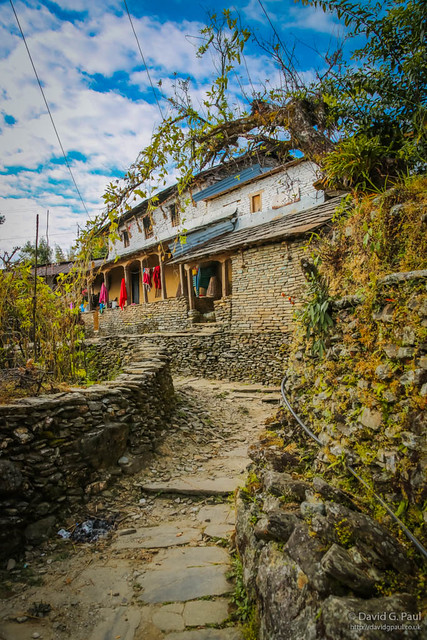 Once we’d finished it was then 4.2 mile trek back down the mountain through the village of Dhampus. This was a long and winding journey with varied terrain. We had to have a few stops as the morning sun made this hard work. After the initial descent through the trees we eventually took a road around to a cobbled and rocky path that reminded me a little of the smaller villages in Yorkshire.

The descent was actually longer and harder than the ascent due to the terrain, but eventually we made it to the bottom where a jeep was waiting for us with our luggage. We stopped there for 10 minutes to get a drink and then drove the 15 miles back to Pokhara. On the way the driver had to stop and pay the police as they pull over new vehicles, and the one our driver was using did not yet have its paperwork.

When we got back into the city we were dropped off outside the Paragliding place and our luggage taken on to the hotel. We were bundled onto the van that was waiting there after I’d been told I couldn’t take my camera with me. I also asked if we needed warm clothes for this but the guide seemed to think we didn’t. In the van we were told there was a chance of a water landing so anything we took with us would be at our own risk. A little late to warn us, but fortunately they let me leave my phone in the van.

It was an approximately 20 minute drive from there up a mountain to where we’d be paragliding. After parking up it was then a short five minute walk to the top where we got to choose who our guide would be. I said I was fine with anyone so was assigned one who then fitted me with a helmet and harness.

Once the guide had attached himself to the parachute he then attached my harness to his and told me to run forward, towards the edge of the cliff and to look forward not down. Eventually my legs were still moving but not making contact and we were away. 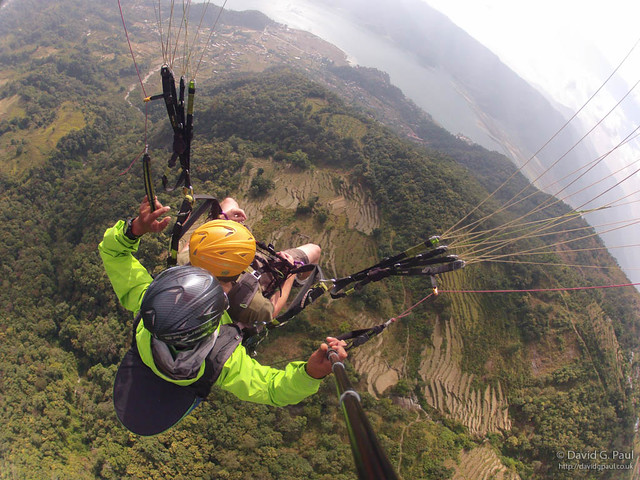 Time passed quickly in the air and we were soaring through the sky, catching thermals to travel around the mountain around Pokhara. It was actually warmer than I expected so was okay in shorts and t-shirt. After a few circles we got higher and higher before moving to over the trees. Whilst over these trees we got close to vultures who were also riding the thermals.

The guide asked me if I liked roller coasters – it sounded like a loaded question but I cautiously said that I do. Once he’d had that confirmation we headed over so we were above Lake Phewa Tal. The guide then said it’d be fun and started doing acrobatics over the water. I’d never realised before this that it was possible for parachutes to go upside down. A few minutes later we then swung around over the shore again and started to descend lower and lower until the guide told me to keep my legs up ready for landing. Just before touching down I was then told to stand and ran forward a few steps as the parachute came to a stop.

It was a fun experience and very unlike anything I’ve done before, but one of those things you have to do when visiting Nepal. After the parachutes had been packed away we were driven back to their office and got to look at the photos they took during the flight. I was interested but had no idea where our Trek Nepal guide was as I’d need my wallet from my backpack first. Five minutes after standing around a while we were then told a taxi had been sent to collect us and take us to the Butterfly Lodge, and that those of us wanting CDs of the photos could have them delivered in an hour if we left 2,000 rupees each with the reception.

The hotel looked a lot better than the guest house from the last night and was actually better than every room we’d had so far. With our bags dropped off in the rooms we then headed out to All-in-one Cafe for some lunch. It was another late lunch so we were all very hungry by this point. I went for a spaghetti bolognese which was coated in cheese. It tasted great and wasn’t that expensive either at only 250 rupees, but the meal was included as part of the tour so didn’t matter anyway.

On my way back out from the hotel, having fetched my cameras, I then found out I’d need to change rooms as the one I was sharing with now had his Dad turn up to surprise him. As they understandably wanted to share a room I’d needed to shift my bags into another. I decided I’d do that later and instead checked at reception to see if the CDs had been delivered before heading out. 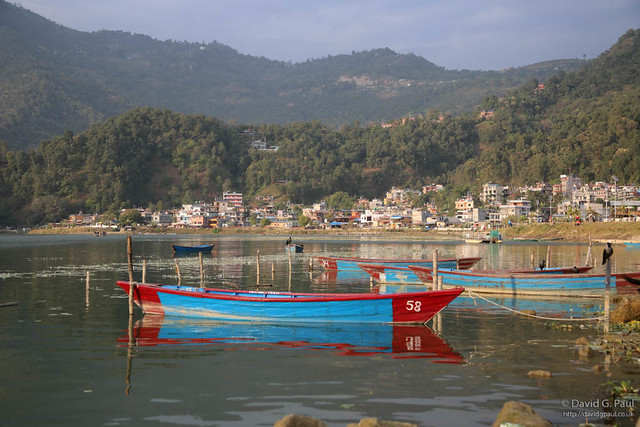 As the CDs hadn’t been delivered I first went to the paragliding office to pay and pick them up. This didn’t take too long and I was soon walking down by the lake. I sat around for a while taking photographs and hoping for a good sunset over the water. After 20 minutes of waiting a layer of mist started to roll in over the far mountains so I decided it wouldn’t be worth waiting.

After moving my bags into the new room I finally got to have a hot shower – not just warm, it was hot. It’s amazing what things you can take for granted and then miss. There was then a few hours to kill until we’d all be meeting up with other marathoners at the Moondance Restaurant for 19:00.

The restaurant was really good and their pizza is recommended by guidebooks , so I tried that topped with barbecue chicken and green peppers – it was incredibly good! This was then followed by apple crumble with ice cream which was also really good. We’d taken our guide out for this meal as well as it’d been our plan to treat him, however the restaurant waived his part of the bill.

We then stuck around talking until 22:30 when we decided it’d be a good idea to sleep before our morning drive.