Sunday mornings usually involve a run of some sort, and even with being in Saint Petersburg I did not make an exception to this trend. I’d been able to get about thirteen miles done during the week so only needed to do a run of no more than eight miles – which would equate to about an hour if I kept an easy pace.

It turned out though that I’d be a little slower than normal as I photographed various places I encountered. I crossed many bridges and weaved around all over the place as I spotted new places to take a look at. Running is a good way of exploring a new city I find, and this run was good for helping me to figure out where I could go with my DSLR camera over the next few days.

By 08:00 I’d showered, and was ready for breakfast. The choice at the Hotel Angleter was actually pretty good so having been for a run this morning I decided to have a good selection. Whilst waiting for our guide who was going to arrive at 10:00 we went across to a 24 hour store to get a large bottle of water for 111 roubles that we could use to refill our water bottles over the next few days. Having an available source of water is something I learnt all the way back in Egypt. 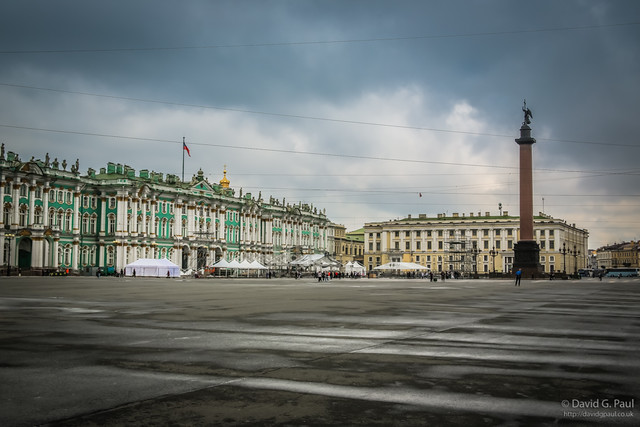 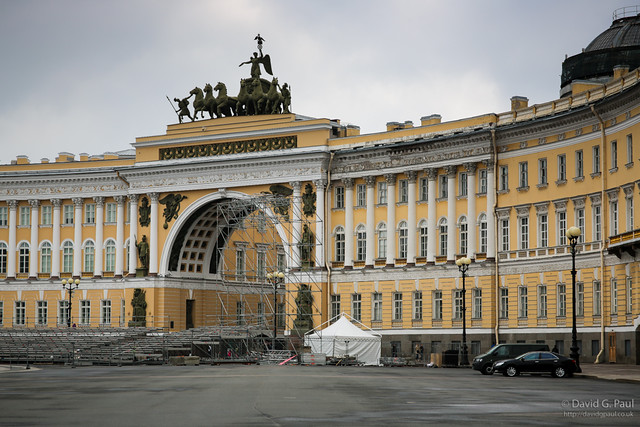 The guide for our tour was already waiting for us when we went down to the lobby a little before 10:00 – better than the timekeeping abilities of our guides in Mexico last year. From our hotel we walked east to the Palace Square, an area I’d ran through earlier in the morning. It was a little busier now, but the work they were doing to prepare for some celebrations was obscuring the buildings that form the State Hermitage Museum. On the way there our guide told us a little about the founding of Saint Petersburg, Catherine the Great, and the museum itself.

We arrived just before they opened at 10:30 so had to hang around outside for a while initially. Once inside, we left our backpacks at the cloakroom and started our tour. The first of the buildings is the Winter Palace, but the museum expands into other buildings along the Palace Embankment – the Menshikov Palace, Museum of Porcelain, a storage facility at Staraya Derevnya, and the eastern wing of the General Staff Building. 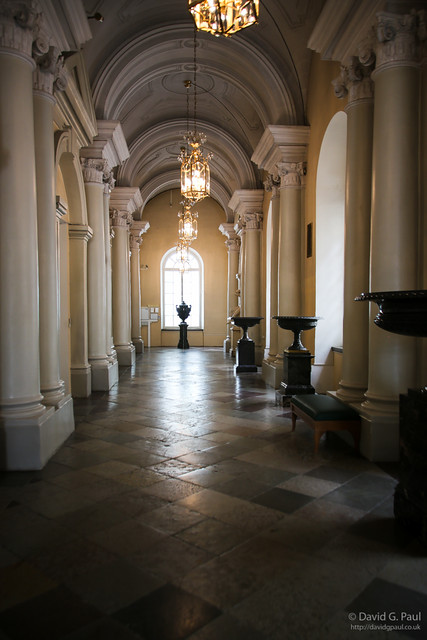 The museum itself was started by Catherine the Great but since that time has grown tremendously. Originally the Winter Palace was a home for Russian Tsars from 1732. It wasn’t until 1917, during the Russian revolution which saw it being taken over by the Russian Provisional Government. A few months later it was taken over by the Red Army in another revolution which saw them replaced with the Bolsheviks led by Vladimir Lenin. The story of the Bolsheviks wasn’t over, but was something we’d encounter more of later in our adventure.

For today we’d be trying to see as much of the museum as we could, but our knowledgeable guide, whilst quiet (in terms of volume, not how much she had to say), would try and lead us to the highlights of the museum. To start with she went at quite a pace, walking pretty much straight through the Egyptian section though we held back to take some pictures. This area reminded me a lot of the British Museum, and as the tour went on this resemblance changed to be more like an amalgamation of the British Museum and the National Gallery. 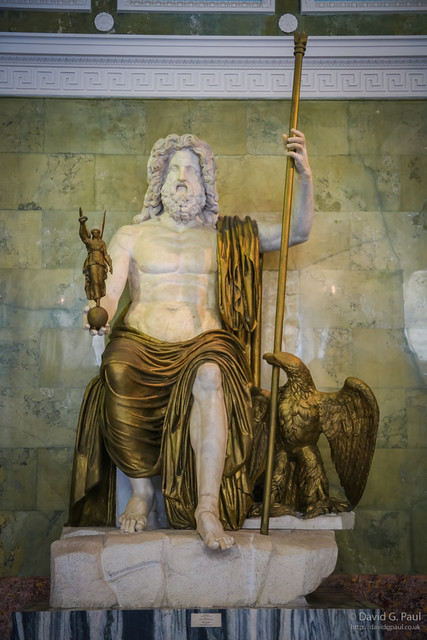 The first section we spent any real time in was filled with statues, including one incredibly big statue of Jupiter, or as the Greeks called him – Zeus. This statue was so massive, and so heavy, that even though this is located on the ground floor they had to reinforce the floor it sits on. This then gave way to paintings, and more paintings. In fact, so many paintings that I started to get bored until we were shown two paintings by the great master Leonardo da Vinci. Shortly after we saw two more by Raffaello Santi, the artist commonly known as Raphael, and a few paintings by Rembrandt. So, maybe not so boring after all. 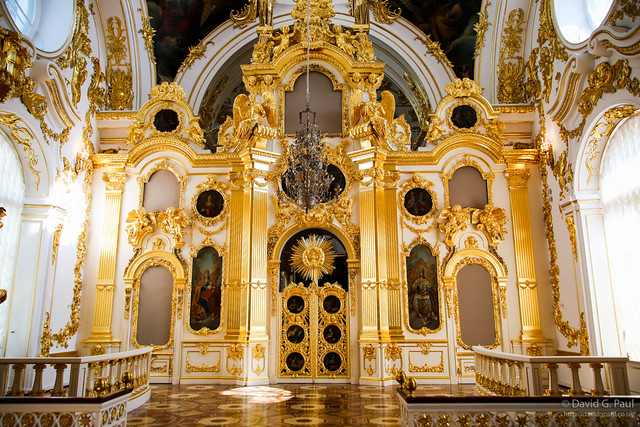 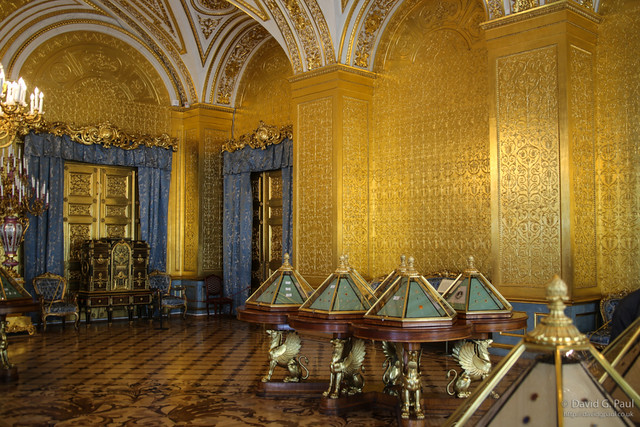 I’m not really into art, so after a while it started to bore me once more – but then they came to an end as we got to see rooms filled with old furniture in the areas where the monarchs had once lived. These areas also included a large throne room with large chandeliers hanging from the ceiling. It was quite an impressive site – as was the chapel where the altar had been painted with gold leaf and walls were bright white. The whole effect made it a very light room. 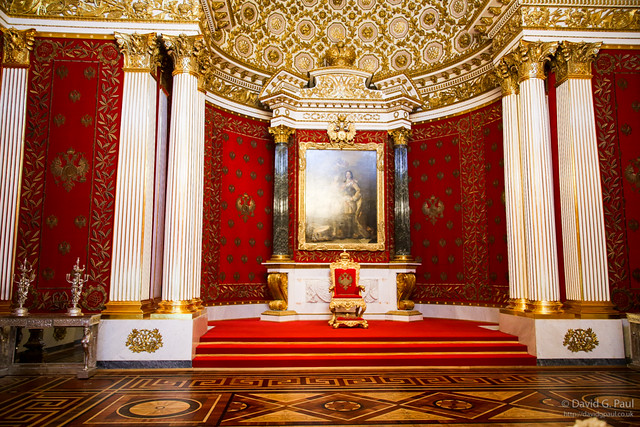 This brought our tour to an end, a couple of hours after it had started. We were asked what we wanted to do and our plan was food. She led us over to the cafe in the General Staff Building before letting us know she’d meet us again at 14:15 the next day. For lunch I had a cold toastie filled with bacon and lettuce. Unfortunately it also had mayonnaise which I don’t like, but it was spread thinly enough for me to cope with it. 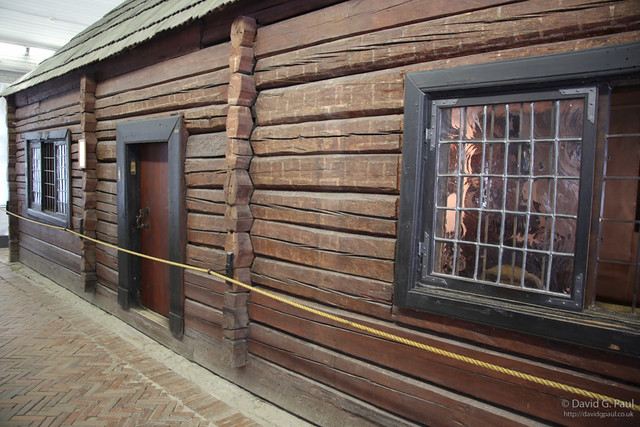 For the afternoon we decided we’d head in the direction of the Peter and Paul Fortress – but going the long way around so we could see the cabin of Peter the Great along the way. The cabin cost 200 roubles to go in – so the equivalent of about £2. At that price it seemed silly to not have a look once we were there. This wooden cabin was built by the Tsar, Peter the Great in May 1703 and is considered to be the date when Saint Petersburg was first formed. 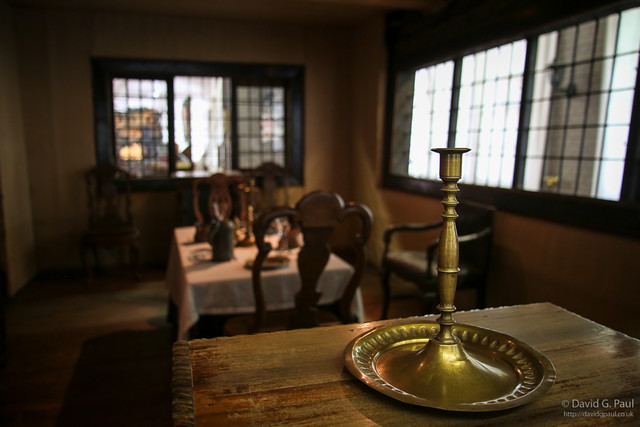 Despite being over 300 years in age, the cabin is preserved very well due largely to a brick construction having been built around it to protect it. You can’t go inside the cabin itself but there are a windows open in each section so you can see inside at what it was like.

Our route continued on and eventually got us into the grounds of the Peter and Paul Fortress. There were a number of different sights they listed, and individually would have totalled around 1100 roubles. The alternative though was a combined ticket that covered them all for 600 roubles. It seemed like a bargain!

The fortress was constructed by Peter the Great starting in 1703, with the founding of Saint Petersburg, but was rebuilt in stone three years later. This was originally used as a citadel and was later used as a prison by the Tsars. To go inside the fortress you don’t need tickets – you’re free to walk around, but we thought the tickets we bought would let us see it all. Unfortunately this was not the case. 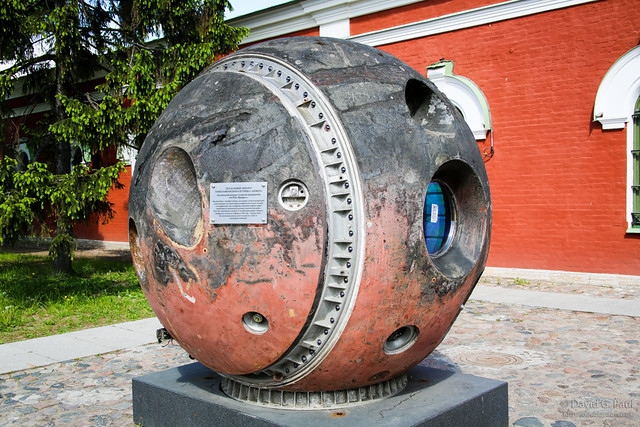 Our first sight included on the ticket was a museum of cosmonautics and rocket technology. There isn’t much to see, but they do have some mock-ups of various rocket engines. My hope was that the cosmonaut museum in Moscow would be better – something we’d be able to see at the end of the trip,

We then wandered a little outside, taking notice of a helicopter that was frequenting the helipad. Our next stop was then the Peter and Paul Cathedral which is the final resting place for most Russian tsars from Peter I up until Alexander III. The Ducal Mausoleum is attached to the cathedral but didn’t really have anything of note. 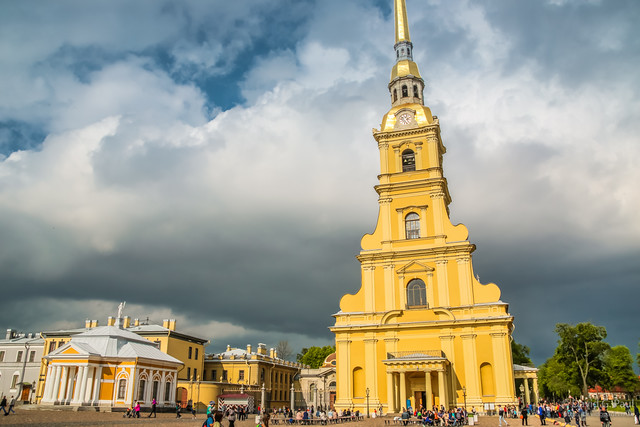 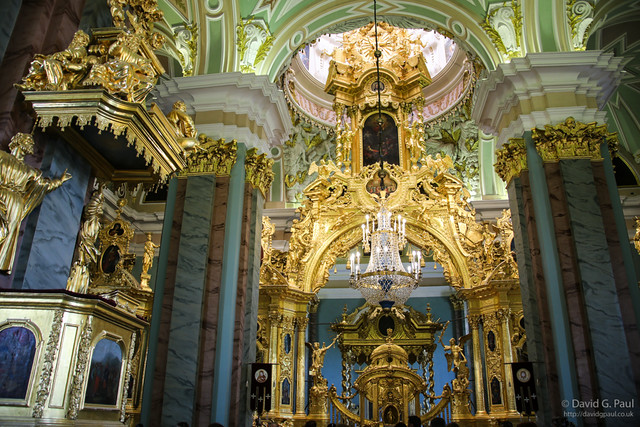 The Commandant’s House is now in use to house an exhibition of the history of Saint Petersburg. Once we’d done there we tried to find the Neva Curtain Wall exhibits though we couldn’t find it. We wandered through the gate and around the beach area but couldn’t see any sign of where the entrance to the exhibit was. We did think it meant on the wall itself, but the Neva Panorama is an additional fee not included on the combined tickets. As it happened quite a few other exhibits which involved wax models were not included in this seemingly complete ticket either.

Having given up on finding it we instead headed to the Trubetskoy Bastion – a prison that had been used for many years and had also housed some political prisoners. This one could have been covered a lot quicker than we did – on both floors there are a large number of cells which are open, but they’re all identical. The only reason to walk around it all would be to read about each prisoner of note. 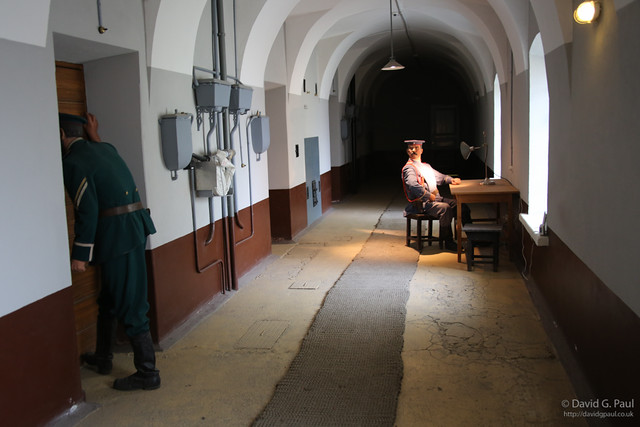 This brought our exploration of the fortress to an end and we began our walk back in the direction of the hotel. After leaving the fortress we managed to take a couple of photos of a second (the first was near the cabin of Peter the Great) old-fashioned sailing ship that had been converted into a restaurant.

To get back we had to cross a wooden bridge that looked like it may have been constructed around the time of the second world war. This route then followed by the Neva river around to the old Stock Exchange building which is located next to the two pillars which when lit were once used to guide ships along the river. 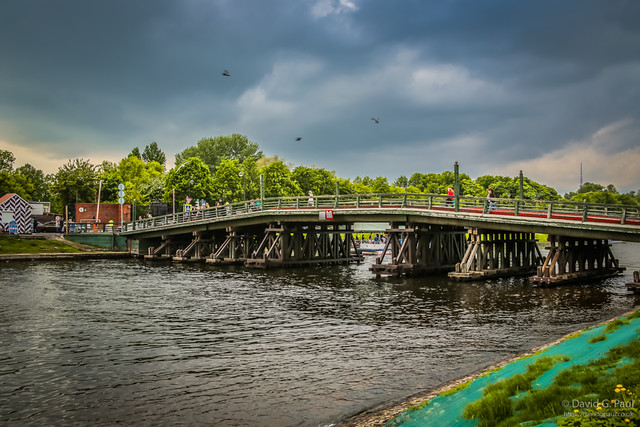 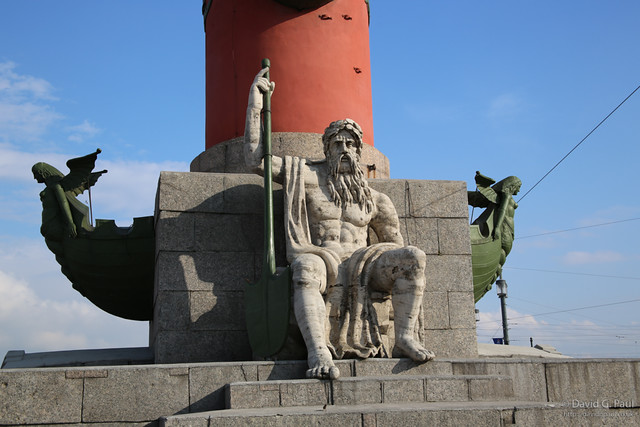 It wasn’t long after this we were on Nevsky Prospekt – the main shopping road in Saint Petersburg. After walking along this for about 10 minutes we came across an Italian place called Italy Bottega. This was a comfortable restaurant where we could sit outside under the awning on a couch. I’d hoped to have one of their homemade pizzas, but it turned out they weren’t able to do pizzas at the time. Instead I went for chicken with mashed potatoes, and had one of their homemade berry cheesecakes for dessert. I did try to have one of their own homemade drinks too, but it turned out they were out of mangoes. 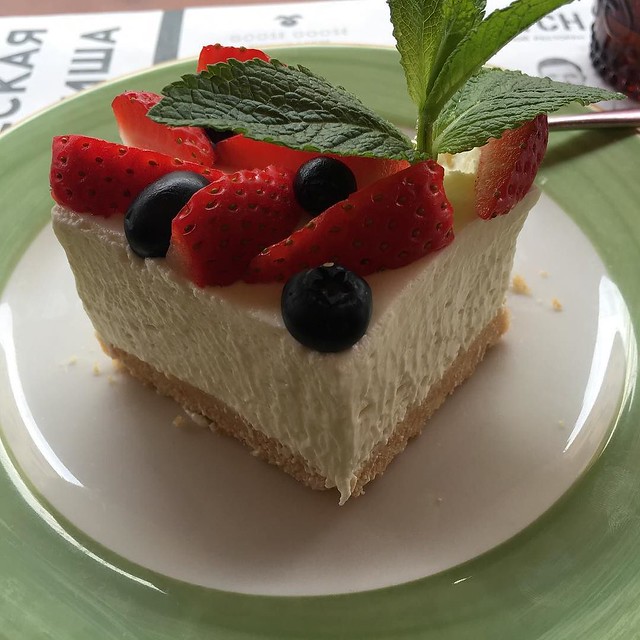 This restaurant was only a short walk back to the hotel which was lucky as the temperature had dropped. Though I took the opportunity of having clear skies to photograph the Mariinsky Palace and some of the surrounding area before heading back for the evening. 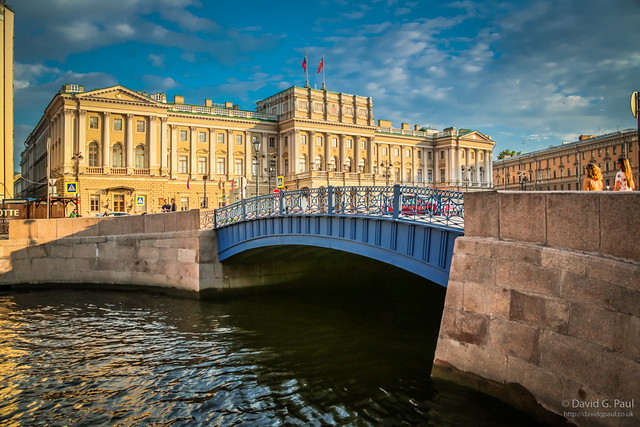 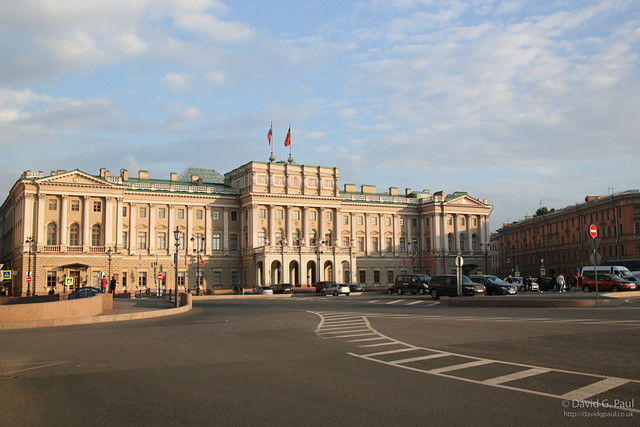